Kirkton of Glenisla to Alyth

Can it be possible that today seems even hotter than the last couple of days?

As we tackled the big early climb from the rickety bridge over the River Isla onto the northers slopes of Druim Dearg, I reflected that it wass just as well I took the opportunity to take plenty of liquids on board last night at the hotel!

Today was scheduled to be another shorter day before finishing tomorrow with a leg shattering stretch from Alyth to Blairgowrie via Bridge of Cally but Debbie's feet were pretty much shredded by now and her right knee, which had started giving her grief yesterday, all but seized up on the ascent of the Hill of Alyth, to the extent that she ended up descending backwards into Alyth!

It was therefore with some relief that we checked into the Alyth Hotel for a shower and a change before sampling their "beer garden". Suffice to say the word "garden" should not be used in any way to describe the space in question and after the previous evening in the Glenisla Hotel, most "beer gardens" would have been a poor substitute. Still, the beer was very fine and after a few, we set off to sample the delights of Alyth on a Friday night. I was pretty sure that the surly looking woman serving at the bar of the Riverside pub next door to the hotel used to be a pupil of mine when I taught at Blairgowrie High back in the day

. We eventually ended up back at the hotel to partake of their £5.95 Friday special of fish 'n' chips with mushy peas, bread and a pot of tea, where it was decided that in the interests of Debbie's knee and not spoiling the memories of the last three days, we would catch the bus back to Blairgowrie the next day and head home. Fine by me - always good to leave some unfinished business!

There was an elderly couple at a table nearby who were local, judging by the way other people were speaking to them, and they were out celebrating something. They left just before us and when we were done, we nipped next door to the shop to pick up a chilled bottle of white. We met the elderly couple in the shop and asked them what they were celebrating, to which they replied that it had been their wedding anniversary on Wednesday. I thought initially they had said next Wednesday to which I replied that it was the same date as ours! Anyway, we chatted a wee while and when we left to go back to the hotel, we noticed them at the door to their house down the alleyway between the shop and the hotel. It was an elaborately decorated close with tiles, quirky ornaments, colourful tiles and various other bits of accumulated bric-a-brac. It was at that point that we noticed the sign with the name "Dewar" above their door and asked if that was their name. What a coincidence - same name and for a moment we had thought the same wedding anniversary!

Before we knew it we were taking photos with a sprightly 91 year old Dan Dewar and his 87 year old wife Joy at their door before being whisked into their Alladin's cave of a flat and treated to their life stories. The place had to be seen to be believed (although I didn't want to take too many pictures inside their home) - every space and every inch of wall was covered with souvenirs and momentos of a life of travelling the world. I don't think there could have been many countries or areas of the world not represented in some form.

And with that rather surreal Friday night in Alyth our Cateran Trail experience came to an end - for this year anyway. There is still some unfinished business to attend to come another year! About to tackle the big climb out of Kirkton Rickety bridge over the Isla Kirkton of Glenisla and Crock 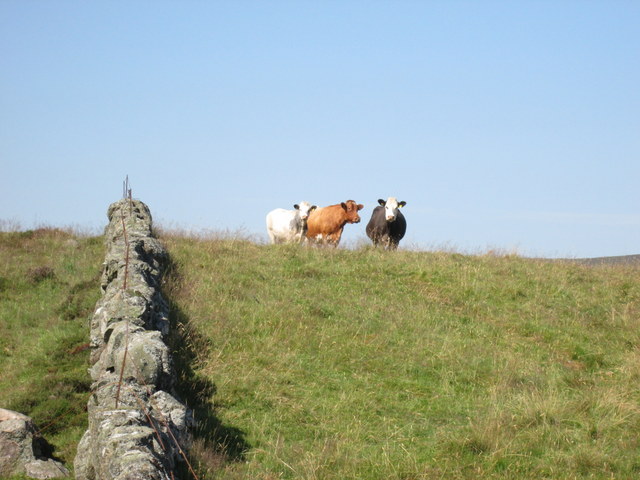 Why the long faces? 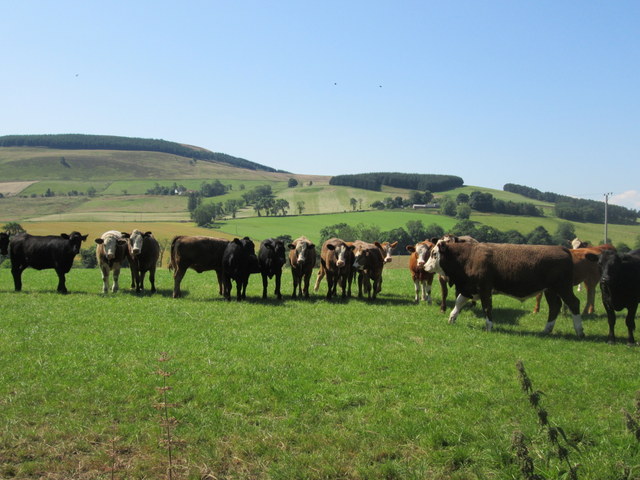 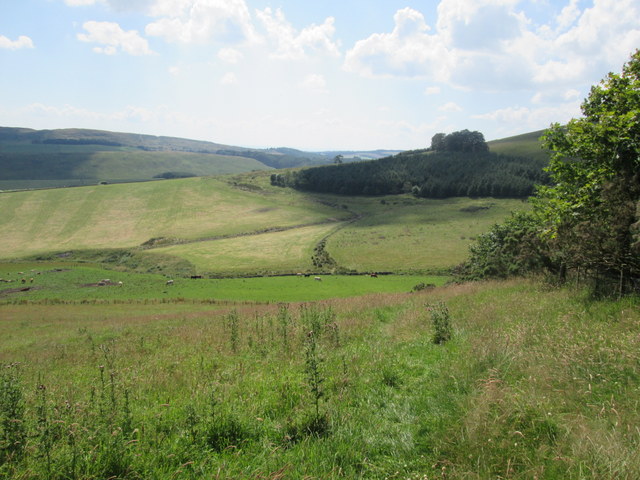 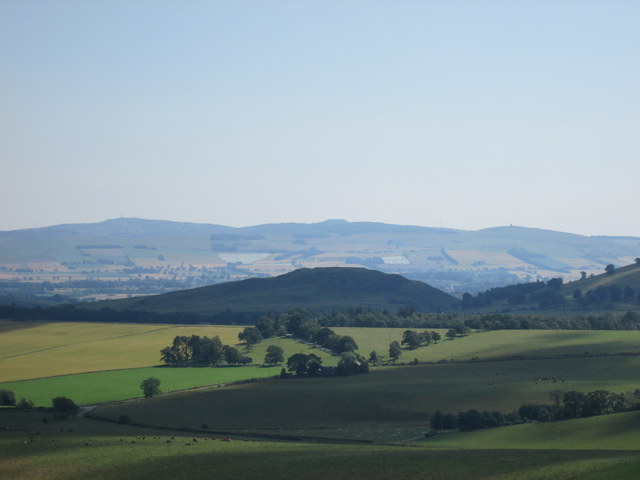 The sheep of Ardormie Farm This is the path that leads to the farm! The long farm road leading down to the B954 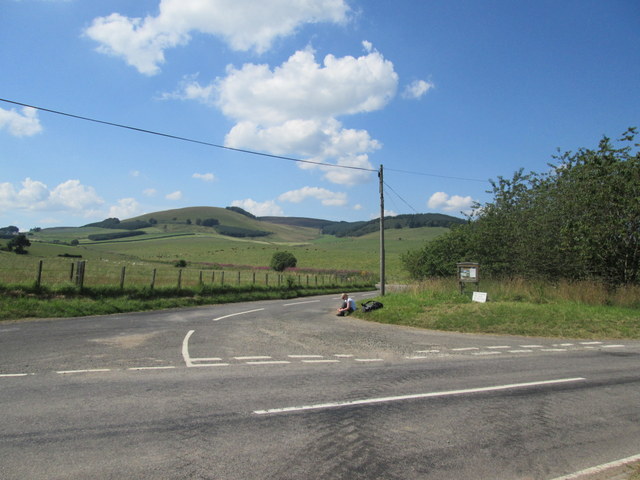 Silent suffering - so near and still so far! Rough going onto the Hill of Alyth 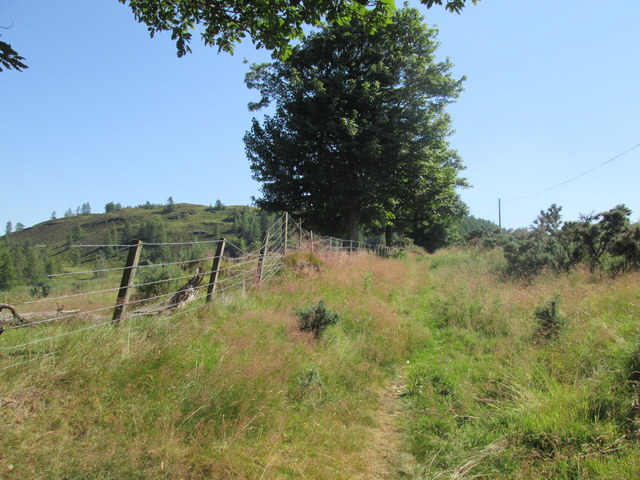 Start of the descent to Alyth Alyth - it could almost be Amsterdam! 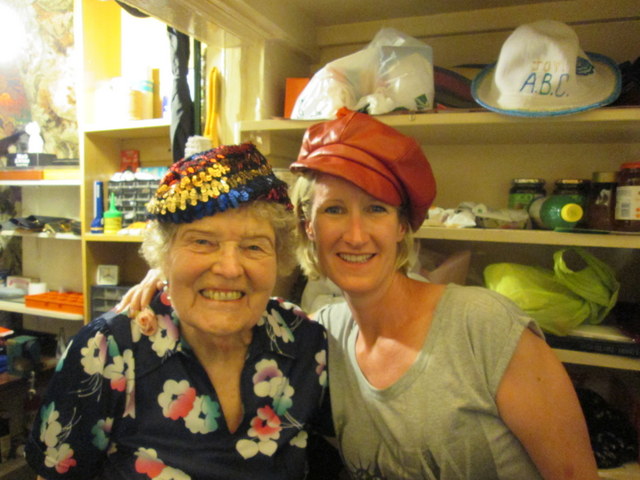 Joy and Debbie model some natty headgear from Joy's collection!

This was the day I did the three eastern Munros at Lawers - Aun mas scorchio indeed, it was boiling!!

Great reports there Graeme, they put me in the mood to give this a go again!

or should it be

. Can you tell me, are there many places en route for wild camping and how much did your pack weigh? It looks mighty big. Pity about day four, hope the knee improves, Arabest Rod

Three days of sunshine, wow! Good excuse for a few beers though. Lots of interest all round, good views and lots of animals, dead and alive I see.

Looks like you had a blast.. Hope debbie's knee is OK. Had the same thing in the Cuillin last week

Rod, there is plenty of camping along the way, although in Kirton of glenisla, we camped cheekily behind the community centre - no room at the Inn as snow on the ground and too many ski-ers in the area

we also spent a night in the lunch hut - coldest night I ever spent anywhere (-18) surprisingly, more of a lunch hut than a bothy..

Looks like you had a blast.. Hope debbie's knee is OK. Had the same thing in the Cuillin last week

Rod, there is plenty of camping along the way, although in Kirton of glenisla, we camped cheekily behind the community centre - no room at the Inn as snow on the ground and too many ski-ers in the area

we also spent a night in the lunch hut - coldest night I ever spent anywhere (-18) surprisingly, more of a lunch hut than a bothy..

Thanks Basecadet for ghost info, I was just concerned there might be just too many farms about. I know Glen Isla well and I know of a spot around about the now closed school as I did the extension there a few years ago, so am familiar with the surrounding area.