The third (and what turned out to be final) day of my central belt-based excursions. Saturday had been miserable. I had intended nipping over to Glen Afton on our way to Troon for a barbeque, but in the event I was glad I didn't! We ended up mostly barbequing in the garage due to the endless heavy rain. Next day, I had thought to head up to Arrochar to climb the Cobbler properly, and probably Beinn Luibean as well, but the weather was looking better to the south.

When this trip had been planned originally, I was going to spend a week in Paisley and dart all over the place climbing hills. Arrochar, any missing Southern Uplands summits, Arran and maybe even Cowal were all on the cards. However the time was reduced to a long weekend, and my motivation for charging around just to bag hills was dwindling. In the event, this car journey around most of Dumfries, Galloway and the Borders was the most shameless bagging trip I've done, and isn't really the way I want to go about climbing hills at all. However needs must, and if I've set my mind to doing all of the Corbetts and Grahams (which I have), then I would need to head down here at some point. Unlike the islands and other out of the way places, I can't envisage a work trip or social visit that is likely to take me anywhere near these hills. Each one of them could be reached by public transport from the Central Belt, but that would take a good number of weekends to do, so best to use the car while I had a free reign over it.

First up was Blackraig Hill. Arguably the most interesting of the summits I had planned today, but the weather wasn't playing ball. A clear run down the M77 and A76 had me in Glen Afton for 9:30. There had been the odd sunny spell on the road but I was now sitting in the car waiting for the end of a heavy shower before starting the walk. It appears that the most common approach to this hill is from Blackcraig farm, but I thought a quicker and more interesting route would be from Craigdarroch further up the glen.

Blackcraig.gpx Open full screen  NB: Walkhighlands is not responsible for the accuracy of gpx files in users posts
My route took me past the cottage of Craig, over a footbridge and past some sheep pens to an area planted with new trees. Through a gate led me onto the steepest part of the hillside, which was studded with crags. In retrospect not such a great idea as some of the Galloway tussocky roughness persists in this area, and all of the rock was very greasy. Still the crags were picturesque until I disappeared into the mist.

Glen Afton from the Black Clints of Blackcraig Hill: 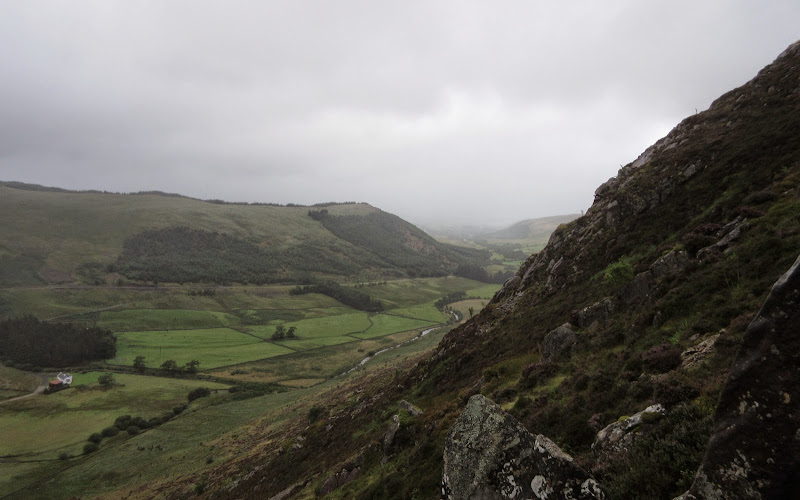 Craigbraneoch Hill and the Afton waterworks: 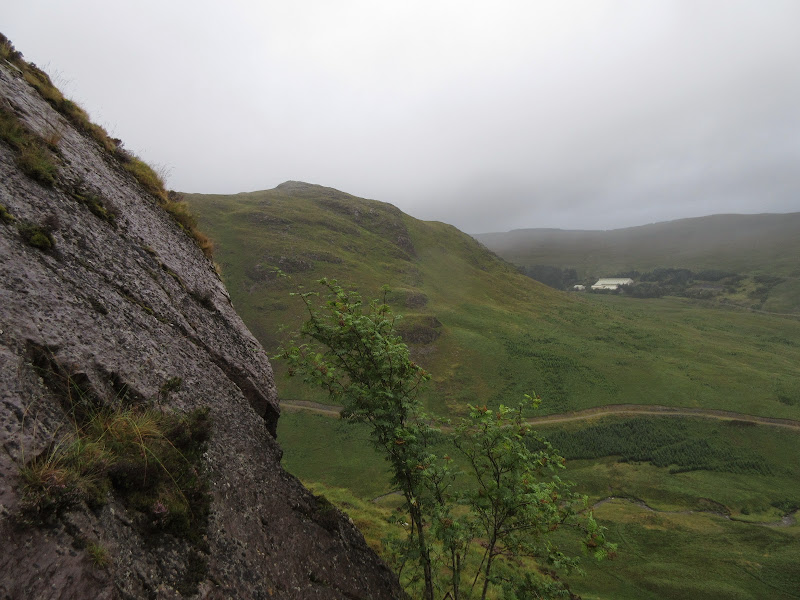 Once up the steepest part, the tussocks persisted all the way to the trig point, making the going slower than expected. Nothing to see, so I returned the same way, picking my way carefully down between the crags. The slopes were thick with blueberries, so I had a nice second breakfast. The rain had been on and off on the ascent, but it cleared a little on the way down, and the light was slightly better for photos. 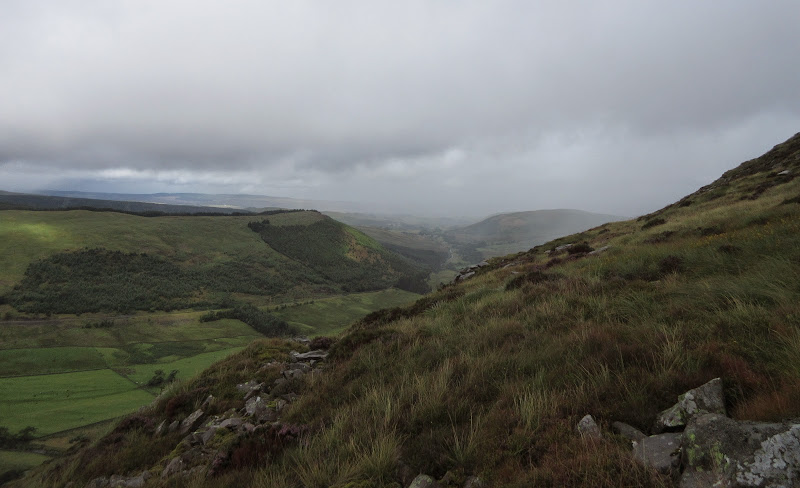 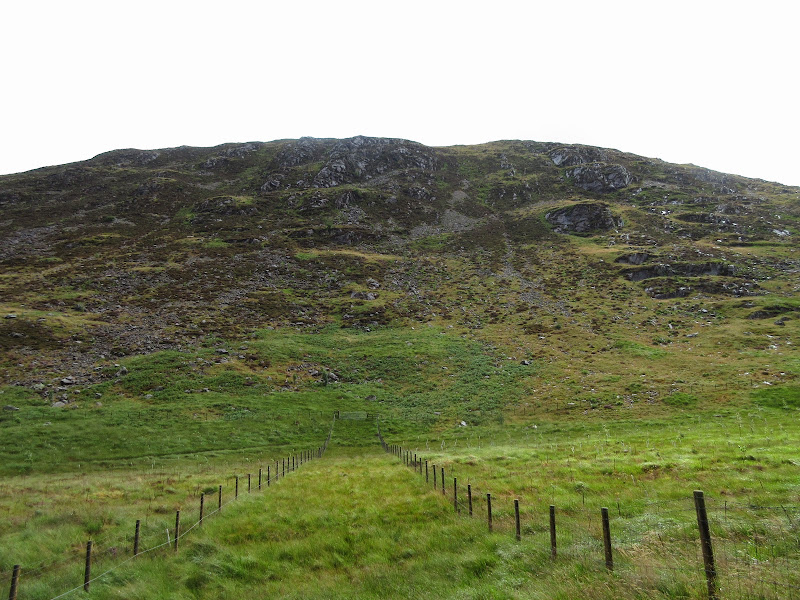 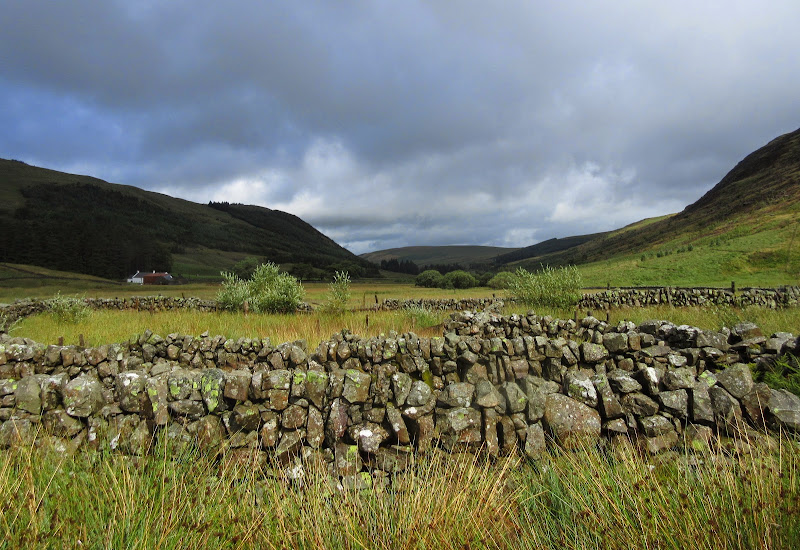 Potentially a pleasant hill, but wasted on the poor weather. Perhaps it would have been better if I'd managed to add it onto the end of my Galloway traverse a couple of weeks back as originally intended? Then again the weather turned poor the day after I finished that, so the outcome probably would have been the same.

Then it was back on the road for the looong drive south and east. New Cumnock, Kirkconnel and Sanquhar have all seen more prosperous times, but none of them looked as down-at-heel as I remembered from previous drives through. The rain got heavier as I approached Dumfries, and the sunshine also got stronger, to the point where I could barely drive for the water on the road, and could barely see for the sun streaming in the window!

Once off the A76 things quietened down, and I followed the back roads over to Lockerbie (where I stopped for a sandwich) then Langholm. Up the A7 then right down a minor road brought me to Billhope, my preferred starting point for Caldcleuch Head. It had taken me over 3 hours to get here from Glen Afton!

Caldcleuch.gpx Open full screen  NB: Walkhighlands is not responsible for the accuracy of gpx files in users posts
If I'd got the bus down from Edinburgh, I would have approached from Mosspaul, however I knew this hill had a reputation for hagginess, so I looked for the shortest walk with the closest track to the summit. The large empty parking area at Billhope had a no parking sign, so I pulled off the road a little further down the glen over the bridge. 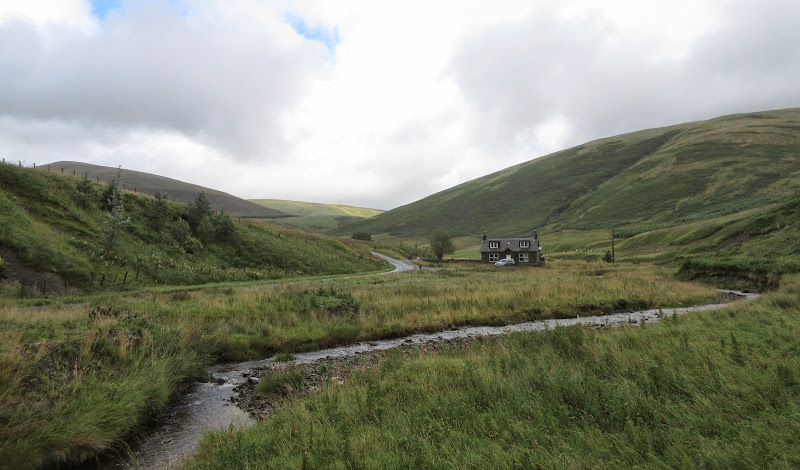 I was caught in a brief shower at the start of the walk but it soon passed. It was an easy walk up past a second cottage and into the glen. Pleasant enough, but very bland hillsides, which had been newly planted with rows of conifers. I thought the practice of planting conifers in straight lines was out of favour now, with a more random natural approach preferred, but obviously not here.

There were a couple of options for gaining the plateau, but I stuck to the burn and the good track, as I wanted to avoid tramping over miles of plateau. The wind was picking up a bit too.

Billhope Burn and North Mid Hill – the ascent route onto the plateau: 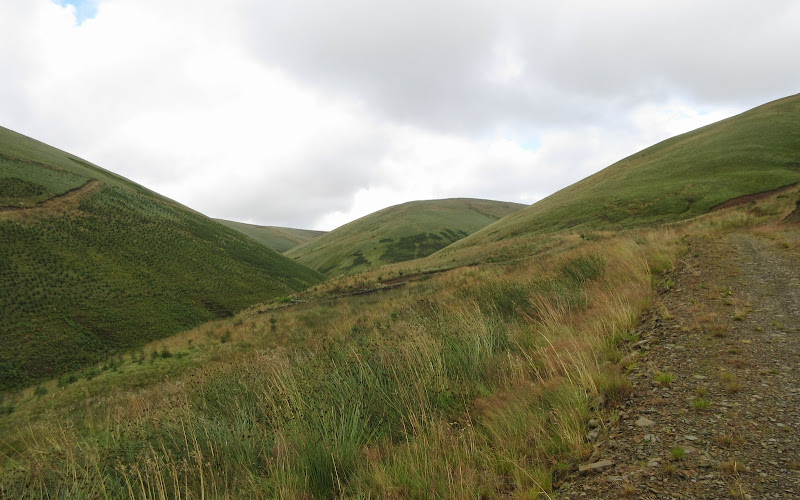 Over the last bridge and onto the spur of North Mid Hill. Above the bracken, the vegetation was quite deep and springy, making the going harder than it looked. As I climbed higher, it gradually gave way to heather and some small hags - not the fastest terrain but not as bad as I'd expected. 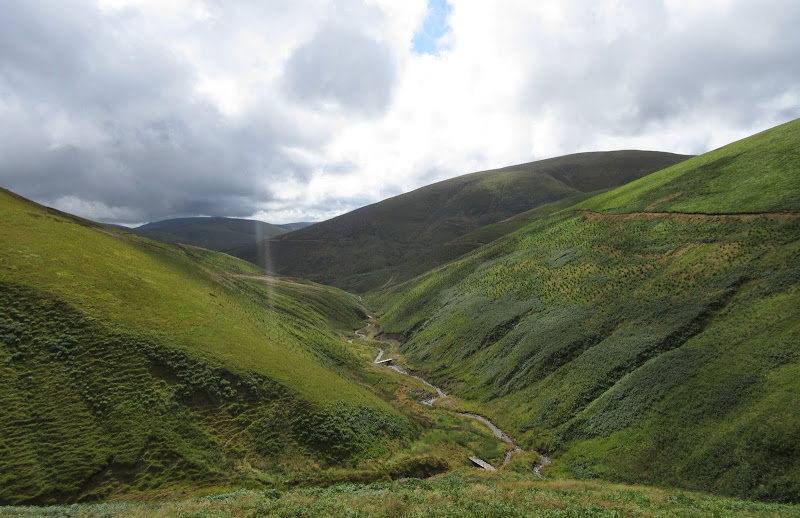 The views were quite extensive from the summit, although it doesn't rise that much above the surrounding hills. Cloud and mist blocked the views to the west and the Lakes, but in other directions it was clearer. Some of the nearby Marilyns looked more shapely than the one I was on, and could have been included in a longer traverse. But I had more hills to climb elsewhere and didn't plan on making another special trip down here. 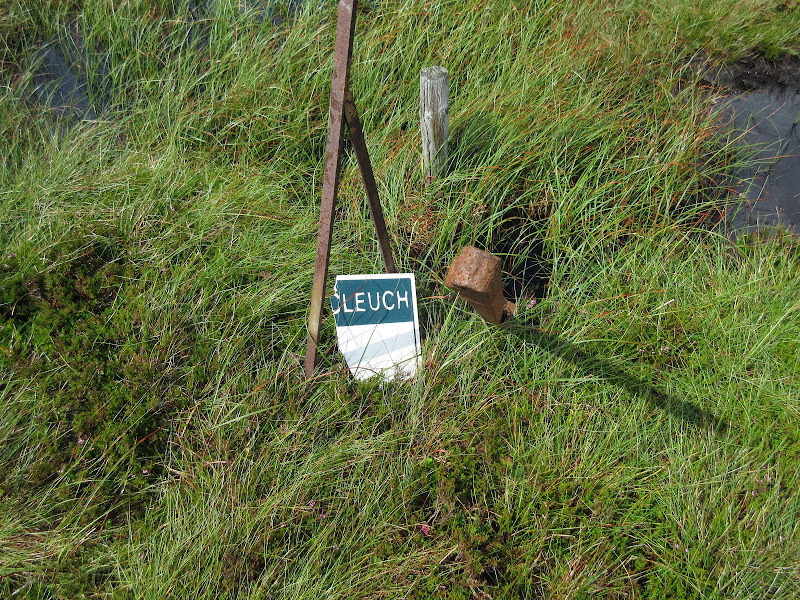 North from the summit across Skelfhill Pen: 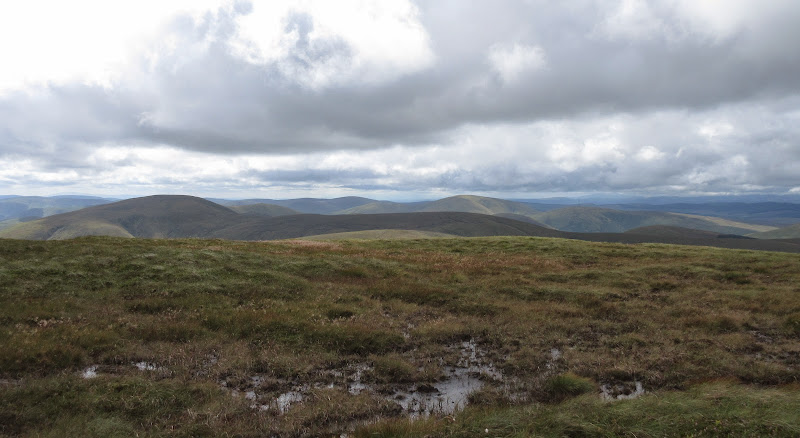 Over in the far east, I could see the source of Ed's recent misery. Fortunately just the wrong side of the border to be a Corbett, but I may get around to it one day... 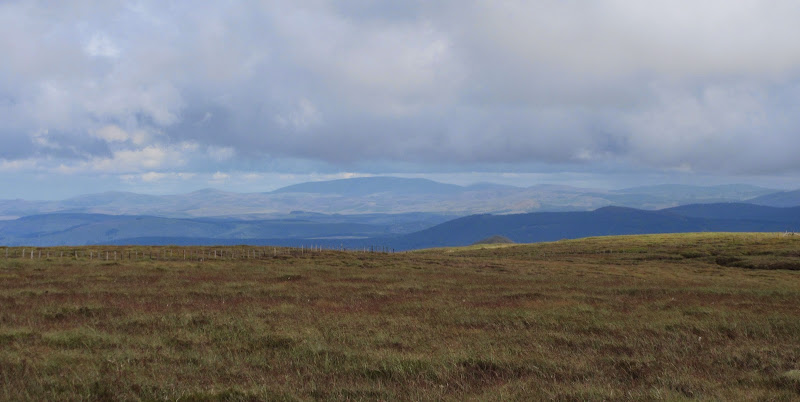 Descent to the head of the track was faster than I thought - it took me half the ascent time to reach it. Then an easy walk back down the glen, narrowly missing another shower.

Back down North Mid Hill: 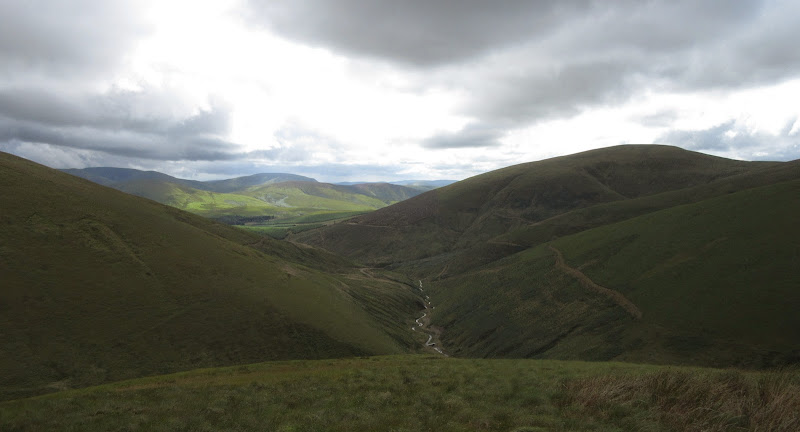 So that was Caldcleuch Head. Pleasant enough, but I always knew it would be a bit of an anti-climax after driving so far. I was glad I had done many of the Grahams in this part of the world on my week-long camping trip, as it had certainly made them more interesting than this smash and grab driving around that I was doing now.

More quiet roads led me to Hawick via Hermitage Castle and parts of the old Waverly line. At one point I was surprised to see a train on a bridge above me - part of the heritage centre it seems. The scenery was far from unpleasant - I could definitely see myself back here one day, but probably cycle touring rather than walking.

More driving took me to Innerleithen, from where I headed up past the golf course to get to Blackhopebyre and the start of the easiest way up Windlestraw Law. After waiting again for a shower to pass, I started walking up the reasonable track. Easy going up Glentress Rig, then slightly softer and wetter for a while, before the track petered out and I was following a path between grouse butts. The summit trig followed soon after.

Windlestraw.gpx Open full screen  NB: Walkhighlands is not responsible for the accuracy of gpx files in users posts

SW from Windlestraw Law towards the Moffat Fells: 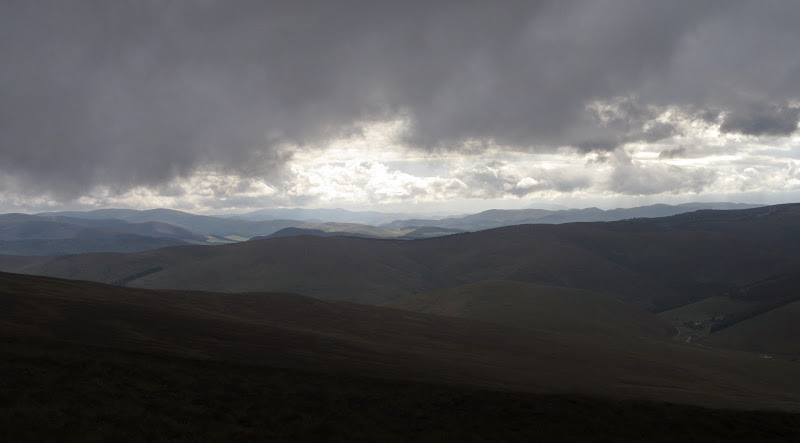 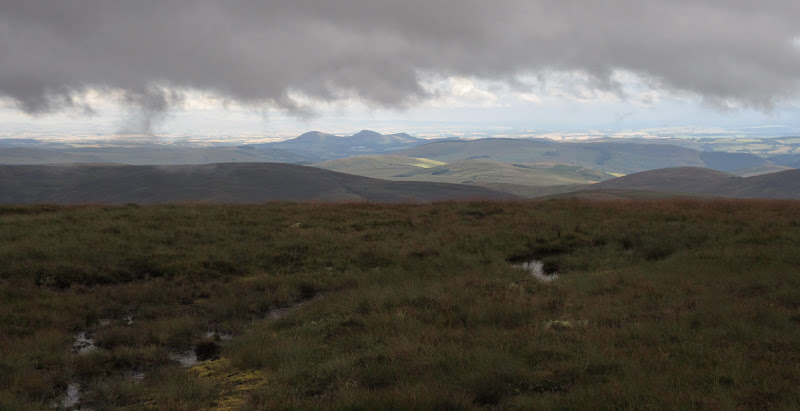 Continuing the theme of the day, I returned the same way. I was looking across to Blackhope Scar and thinking about peat bogs now. I had the time and the energy to go up here as well, and it wasn't too far. However there was no easy track, and once I'd climbed out of the glen there would be at least a mile of hags in each direction to get to the summit. After all of the driving, it seemed that my usual masochistic streak had left me, and I couldn't be bothered with it. I decided to leave it (along with Dun Rig, which was never going to fit into today's schedule) for another day and a more interesting approach from the other side. While I still had a phone signal, I gave my sister a ring - seemed like she was around this evening.

Sun comes out on Glentress Rig: 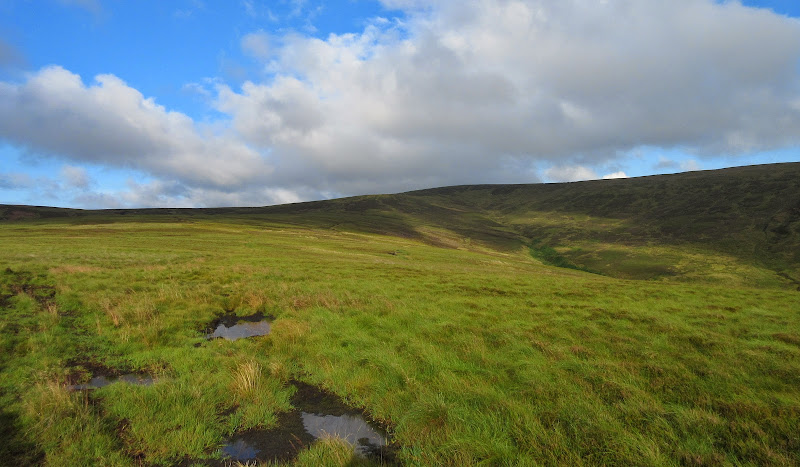 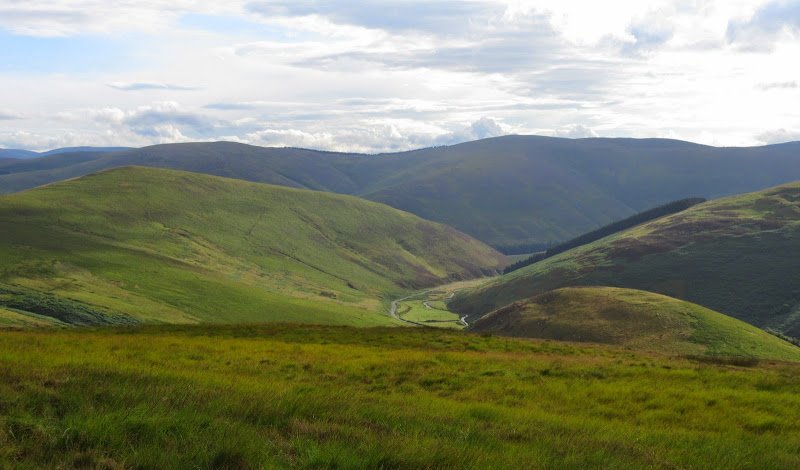 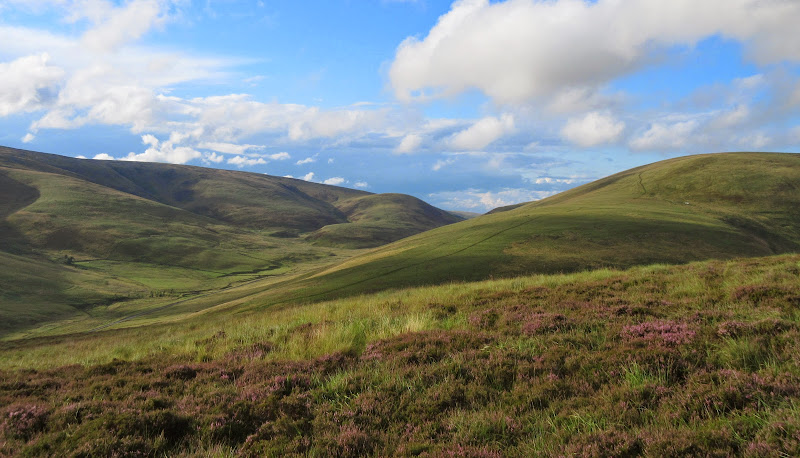 After an easy descent and finally some nice sunshine, I hit the road north, stopping briefly before the descent off the moorland to take some photos and get changed. Then I headed on into the centre of Edinburgh and my sister's flat, and we had some Chinese for dinner. Much better than doing the final peat hag hop up Blackhope Scar! 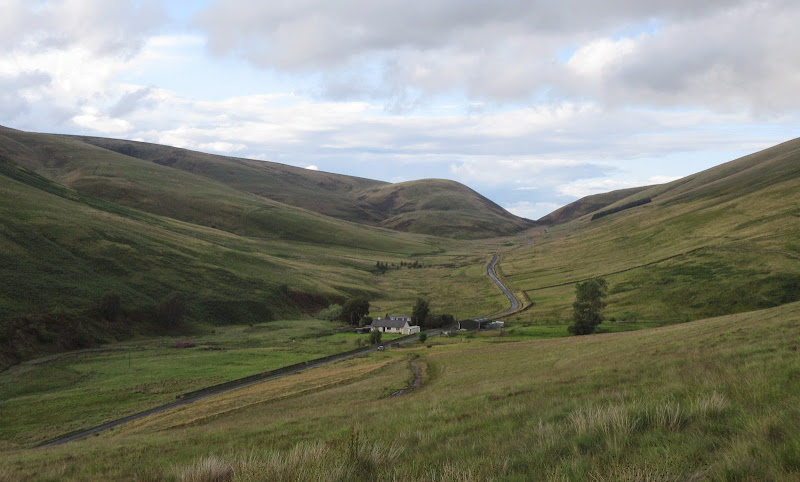 North Berwick Law from the descent out of the Moorfoots: 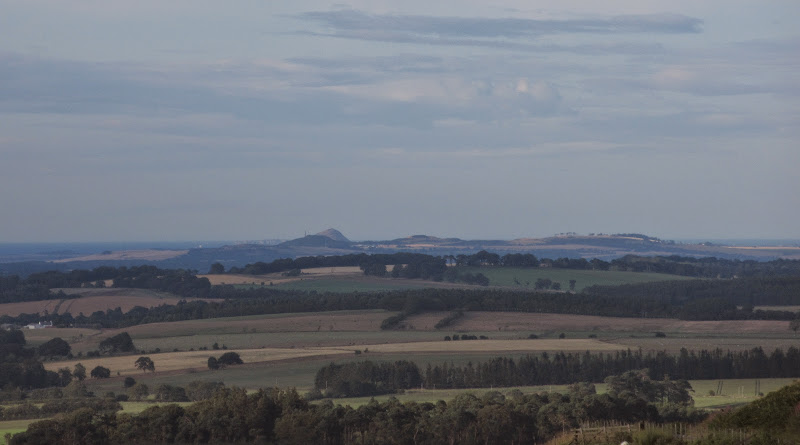 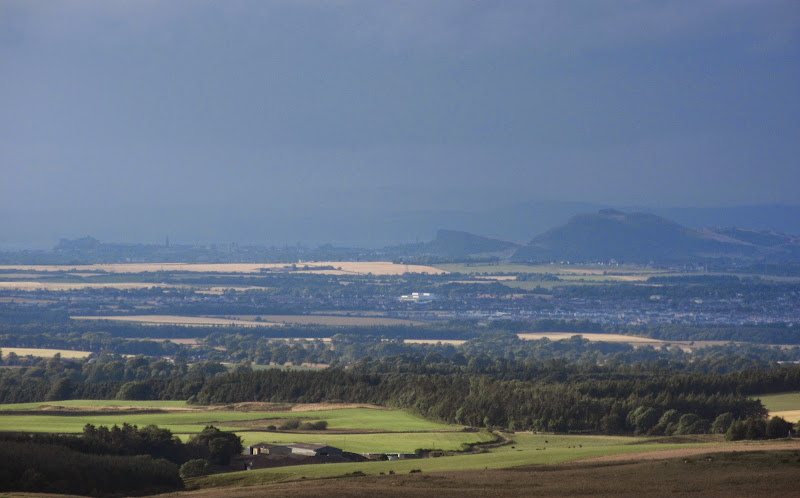 There were some enjoyable moments in the day's walking, but driving around like that wasn't my idea of fun really. Still, my last two Southern Upland hills are within easy reach of Edinburgh, and most other hills will either give good substantial overnight trips, or are within easy reach of Inverness or my in-laws in Dundee. So hopefully no need for another journey like this!

Nice one Malky, looks like you had a fairly successful trip down in the deep south

Jeezo thought it was just flat down that way