Formerly known as fipriestley, I thought about ‘Scoobs Mrs’ for my new pseudonym but he wasn’t keen on that public display of implied ownership

We didn’t make it up Schiehallion on our wedding day as planned so my ‘first’ Munro ended up being on the following day as we stayed at Strawberry Cottage with a few WH pals for the weekend - Sgurr nan Ceathreamhnan, immediately followed by Mullach nan Dheiragain and then An Sochach. The middle of this triplet was GillC’s 100th Munro 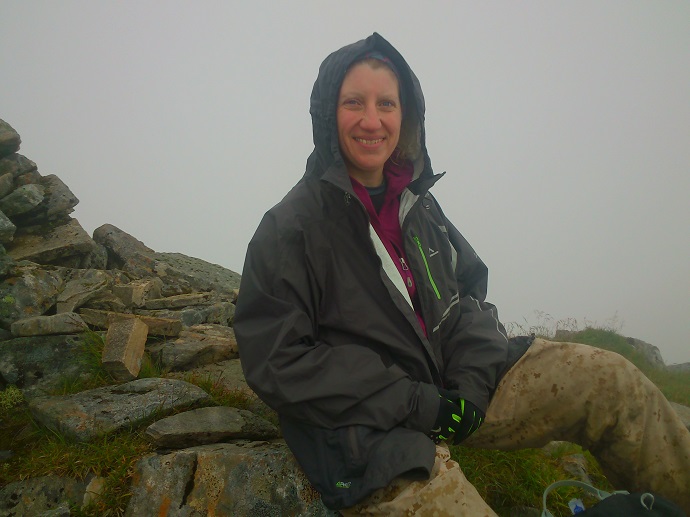 a mini-WH meet in Strawberry Cottage :) Looking stunning! Of course just as we were leaving - poured with rain the day before! :D

As my first report in my shiny new account I thought I’d make this one public and share my ‘story’, more as general interest than a specific trip report as Gill’s got that covered

Realising my growing teenage boys no longer needed/wanted me to be a part of everything that they did (that was my choice in raising them – almost all my hobbies were theirs), I found myself looking for new interests. I tried a few things including bungee jumping and water skiing, but walking and the outdoors were always a big pull for me. So I asked work colleagues if I could join them on their next hill walk, thinking I was fairly fit through all my exercise classes and power walking. However 2 days before the planned walk I was whipped in to hospital for a minor op under general anaesthetic

Getting out the next day, I went straight back to work… only to be told my job (also my main hobby!) was being made redundant

I felt really well though – no pain, well rested and full of energy, so even more determined to tackle my first Munro.

Saturday 10th Sept 2011 – fipriestley’s first Munro (after much encouragement, given my cries of ‘go on without me’ and ‘get me on the way back’, and worries about bursting stitches!) was Beinn Tulaichean closely followed by Cruach Ardrain in the clag, high winds and driving rain! Here I realised that being generally fit just isn’t the same as being hill fit. Yet when we got back down to the landrover track I was ready for powerwalking again

and heard about the Walk Highlands website, which I signed up for once I was home and dried off

Always up for a challenge, rather than putting me off completely, this walk made me so focussed and determined to become hill fit that it was almost 3 months later before I missed just one week in the hills! With the changes in my job my whole work-life balance shifted and I was fortunate to have very knowledgeable walking companions who were happy to let me tag along and learn from them

I soon joined the Glenrothes Walking Club too

and also learned a great deal there (especially from the Macdui walk!), from attending organised talks, navigation classes and winter skills training. Not replacing the walks with my work pals, this just meant that I was often out for 2 days in a weekend and my Munro count soon rocketed.

Meanwhile my confidence was building – I joined in with a walk organised by WH member Scoob, despite my son’s warnings about ‘lone female heads off to meet group of strangers in remote location’

and even started going out walking on my own e.g. Vorlich Adventure. I continued to walk every week, sometimes on my own and sometimes with others and began building up some pretty tough routes e.g. Glen Lyon 4+1 and Forcan-SGS Ridges in prep for my fundraising 45-miler from Forres to Cairngorm (followed by brilliant week off!)

Scoob had also been building up his own bigger, tougher routes e.g. all 9 Fannichs leading to his 3 Bens Challenge which happened to be on the weekend of my first WH meet, in Braemar. We’d kept in touch since first meeting but always about hills really. With only a brief chat in the passing at this meet we arranged to walk the following week to catch up… and so began the adventures of Scoob and Fi, including our Compleation where Scoob proposed, and 2 years later we’re now the second couple to marry after meeting through Walk Highlands!

to Scott & Michelle and a big

to Paul & Helen for a fab site So there we have it… very therapeutic, hill walking means all things to all people but I believe we all have to find our own reasons e.g. ‘it’s not a race’, or ‘you have to go back for the views’… don’t listen!! Decide for yourself

For me, every walk is different and I always get something out of each one.

By walking in the hills every week I have seen some amazing scenery, overcome physical challenges, pushed out my comfort zone, built up even more confidence and belief in my instincts, become even more at peace with my own company and inner voice, learned to trust my own abilities more (bring on the river crossings!

), met lots of people, made many friends… and found my soul mate congratulations, you both look great

Nice one Mrs Fi..cracking photo of you and Stuart too..belated congratulations.

Congratulations - you both look great!

Where was it you got married? Looks familiar but I can't place it.

I got into hillwalking by marrying a Scotsman (I'm English and we live in Kent). The new year after we got married he said he would like to climb 'a' Munro. I said something along the lines of don't be daft (I have a bad back following a serious injury some years ago). A few months later we did our first, Beinn Ime. Given where we live weekly walks aren't an option but we are steadily plodding through them.

I totally agree hill fitness is different! I'm not a small girl and get funny looks sometimes when people fund out what I do for a hobby. I'm not quick but I get there

What a lovely, romantic story

Congratulations to the both of you

Love your dress as well

Smashing,,enjoyed reading that Fi. Once again, all the very best to you both for your future together.

I've just posted my report, later than normal so feel free to add anything I've missed out (memory aint what it used to be at my age lol)

Great story and all the best to you both, and your boys

Wonderful story, wonderful couple, and you summed it up, as to the reasons we walk, each finds something, something different, but no reason is wrong, its yours and yours alone. The mountains are a big pull, some don't get it and never will, their loss. For me, I find a peace in the wilderness, the hills, the glens, in all seasons, always have, is a part of my very soul, and in the walks I have shared with you both I can see its a part of both your souls too.

May I wish you the very best that life can offer, hope to see you both soon,
Love Dave (Spider)