As usual the weekend arrived and the forecast was not looking too good, but a forecast of heavy rain for later on Sunday was enough for me to set the alarm for 0430

to get an early start down at Blair Atholl to walk over Beinn a Ghlo. Having spied these 3 from a walk a few weeks back this sort of completed another piece of the jigsaw.

On the way to Blair a fine view of the Cairngorms, with the unmistakable Lairig Ghru.

I started walking by 0730 and to be honest it looked an ominous start, not just the cloud but the size of Carn Liath in the distance, I had read a few reports of this walk, the WH write up saying a strenuous day, 9 to 10 hours, bogfest, cripes what was I thinking ! The base of Carn Liath was reached along a good track and a left turn towards an old wall. On route a couple of bogs to jump, I say jump as I couldn’t see anyway of bypassing these, so for the short of leg amongst you be warned, it was sssstretch The ascent passed without issues, steep in places, no navigational issues and it was dry, so far.

No views today but a short walk off the top and views began to appear. Looking back at the crest, the cloud boiling over and it was a tad windy along this stretch too. As I was getting blown about a wee bit it was time to get out the new gadget (how I wish I had this in Laggan when on all fours at a summit, I wont mention the name, makes the hairs on the back of my neck stand up)….an Anenomnometereeeer, bugger anyway a wind device ! Recorded speed of 30mph, hmm seemed a lot worse.

Good pace along the crest and a slight descent and there in front stood Braigh Coire Chruinn-bhalgain, a mouthful if ever I saw ! The route up visible, but fortunately not too far down and a steady angle too, so before long I was at the bealach.

On ascent of this second of the day a view back to the descent of Carn Liath. 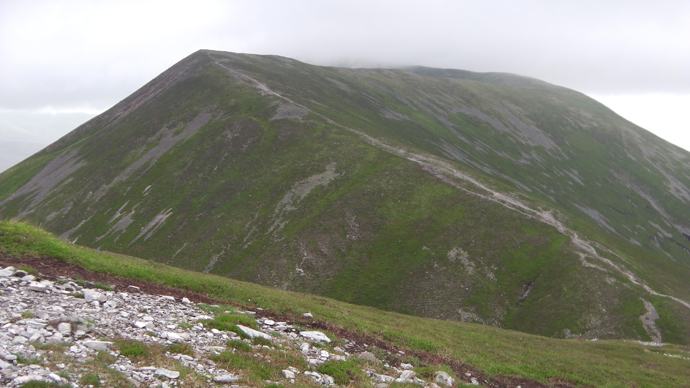 Again the ascent was not as bad as it looked and after a swift stop, still breezy round these parts, off towards the last of the day, along a fine crest just out the clag too. Carn nan Gabhar was the longest ascent of the three, but a gentler slope but after the first two, this made it seem a long haul. But it wasn’t even 1100hrs yet so no worries. I didn’t check to see if this was higher than the first two, but the clag was certainly further down, maybe that forecast rain was closing in, but a view of the first two revealed itself following descent of the last and my route out down the left. Now the route out, and I had been briefed a couple of lads who had come in that way, it was a bit damp but ok. Hmm

Well before I get to that, the rain came in just after I had descended to slightly easier angled terrain. Having stripped off after the descent of Carn nan Gabhar, not 15 minutes before it was now real rain. So I had to pull up and redress. Then they hit, in force the wee midges. These girls were taking no prisoners. In an unprovoked and ferocious attack, I had no choice but to light up a Anti Midge Flare, a Windsor Blue one, but it failed, the slight breeze carrying away its effects. It isn’t easy lighting these when you have one leg in the waterproofs, waving arms about I can tell you. I persevered and repacked as I walked out, fast. Jeez !

Now that walk out, yes it was long and yes it would be a bogfest had we had more rain, but thankfully it wasn’t too bad, firm beneath the surface, but it seemed a long while before hitting the track coming in.

So yes the forecast was accurate, never thought I’d be saying that, but with an early start I had only endured an hour of it, back at the car by 1430hrs. Besides £300 of goretex, gotta get some use out of it

Nothing quite like working to a tight timescale when you know the rain is on the way!!

Well done battling through those midges. They are really bad right now.

Gordie12 wrote:Nothing quite like working to a tight timescale when you know the rain is on the way!!

Best not to make your plans known, then no one knows if you miss them

They were a bit fierce, but had escaped them so far

Strong wind is notorious on that Carn Liath ridge. I was up there with a girl who was lifted off her feet and got so scared we had to walk her off the hill. Well done on beating the weather!

dogplodder wrote:Strong wind is notorious on that Carn Liath ridge. I was up there with a girl who was lifted off her feet and got so scared we had to walk her off the hill. Well done on beating the weather!

Cripes, best she doesn't walk with me often