Vorlich - What could possibly go wrong?

Vorlich - What could possibly go wrong? 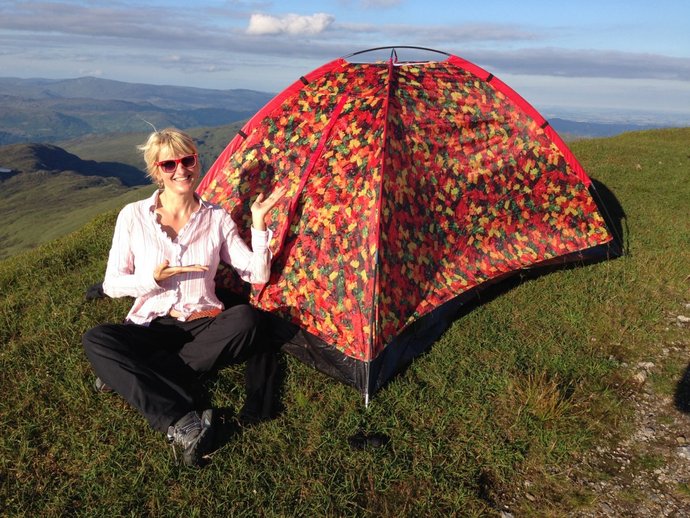 At around 11am I was still in bed wondering what to do that day. Weather was blue skies and sunny so I had a look at my trusty ipad and the BBC Weather App showed 2 days of SUN with zero chance of rain and gentle 5 mph winds in the Loch Earn area. Not often it gets that good in Scotland so up I got and organised the wife (who is not a fan of tenting at all) and persuaded her we should "do it". Amazingly she agreed so we chucked anything we might need into the back of my old BMW and headed for............... ASDA. My wife used to work for ASDA. She says it stands for Another S*^% Day Ahead......

I have all the gear I need for me, but since I had a passenger I had to buy a bit more. Starting with the tent. My one man tent barely has enough room for a small hamster, so we had no choice but to buy a 2 man tent. Or is it a 2 person tent?. Whateva. ASDA had about 50 two person tents for sale, unfortunately all festival tents with a gummy bear motif. But hey, £12 was alright. While I bought the tent the wife was off sorting out the food. I didn't get involved, she's pretty good at these things. I had told her we would be carrying a camping gas thingy with one pot. I remembered at the last minute to buy a box of matches. 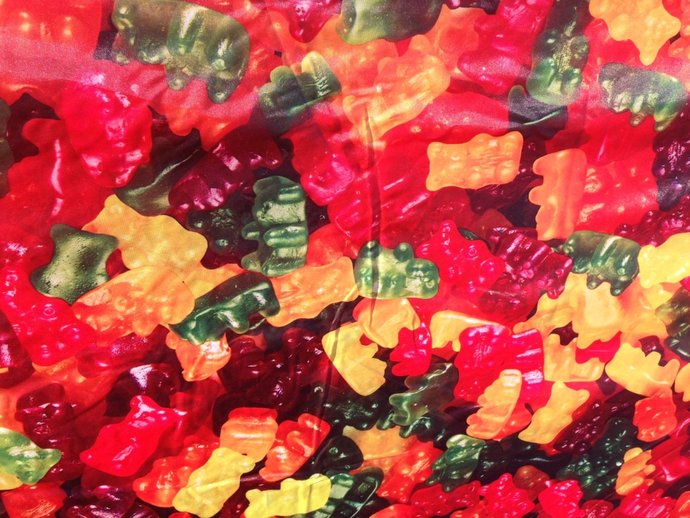 We chucked everything into the car and drove to the starting point on the South side of Loch Earn. It was now 3:30pm and the car told me it was 27 degrees C outside. Had we driven to Spain by mistake? There were no Midges which surprised me, but don't worry, they were waiting ahead for us. We pulled out 2 empty rucksacks and started packing them from the stuff we'd accumulated that day. My wife packed the duck down pillow, a small bottle of water, 4 bags of crisps and her phone. She then made it clear that her rucksack was full and she wasn't taking anything else, bless her. So after I had loaded up my rucksack with several litres of water, and tie-wrapped the tent, mattresses and pot to the outside, we were good to go. I did ditch the Berghaus full waterproof jackets and bottoms for 2 Macs in Sacks. The BBC promised no rain and I believed them. I wouldn't
have trusted Yahoo weather you know.

So at 4pm off we set. I suppose it takes the average person a couple of hours to summit Ben Vorlich, but it took 3 hours 15 minutes to get the wife up there. Her rucksack was very heavy she kept telling me. Truth be told it was her first ever experience with a rucksack. I usually carry everything. At the summit, 985m or something, there were 4 other people lazing around. My plan of attack was to open the 2 tins of Gin and Tonic and take in the splendid views, but no no, we had to put the tent up first. Luckily everything needed for the tent was in the bag. Good old ASDA. The tent consisted of a single skinned fabric and 2 collapsible poles, oh and 4 tent pegs. But no diagrams of assembly. Having said that, it was no Krypton factor jobbie and assembly took about 5 minutes. It took longer than that to work out where to put it on the grass. And where did we put it? Yes, right beside the trig point at 985m. Why hide it in a sheltered area when the BBC promised 5 mph?

3 people were faffing around with a big flag taking photos but at around 8:30pm we were all alone (except for sheeps which were inquisitive but held their ground 25m away). Out with the camping gas stove, and within half an hour my wife served up blue cheese burgers. Well done her! It stayed bright for ages but soon got very cold, 13 C the BBC had said. It didn't feel like 13 so we cozied up in my 4 seasons sleeping bag, yes just 1 bag. I can carry a heavy pack but I'm not Superman. We had 2 mattresses and shared the duck down pillow, plus we had a sheet to throw over us. So fully clothed with gloves and hats too, we were "quite warm". The promised 5mph wind turned into about 20mph but our superbly well engineered tent defied the elements. It was noisy though, a lot of flapping in the wind, but I'd brought ear plugs. Big brain you see. There was a bit of tossing and turning (ooh err Missus!) but at 5am it was obvious that the sun was up.

What a sight to behold. Below us in the valleys was a thick blanket of cloud cover. And above it, the sun!. WOW. I reached for my phone to photograph it, but found that the battery had died. No problem, I have a backup battery. Where was it, yes, in the car, DOH! I got ready to nip over to Stuc a'Chroin leaving the wife to get more sleep. The amazing view must have been too much for her.

It's amazing how fast you can nip around when you don't have anything to carry. I took a Mac in a Sac, a litre of water, and off I went. After 10 mins I had dropped down a few hundred feet and came upon several deer who obviously weren't used to meeting people at 5:30am because I got quite close before they realised they were "not alone". They charged off and looking around I saw about another 25 deer spread over the surrounding hills. After a simple scramble and a ridge walk, I reached my destination. I waved to my wife but there was no response. No surprise there really. I retraced my steps and was back at Gummy Headquarters exactly 2 hours after I'd left. My arrival coincided with a "hello!" from the tent and 30 minutes later hot bacon rolls were served. No coffee though, because I'd forgotten to buy it the day before. I didn't say I was perfect.

It was now 8:10am and we spotted 2 earlybird walkers about 20 minutes away. So we made the decision to demobilise asap before they arrived and laughed at our tent. We met about 20 people between there and the car walking up the path and had a good chin wag with most of them. Close to the car there is a small dam with a swimming pool custom made for the weary sweaty traveller. The air temperature was lovely and warm but the water was Baltic. However I did submerge myself while the wife dipped her toes. Very refreshing.

A short trot back to the car and hey presto, we made it and lived to tell the tale. It had been one of those strange weather phenomenons where we didn't experience 4 seasons in one day as is usual in Scotland.

I did receive criticism from several of my friends who said I was supposed to leave a festival tent where it was pitched. They weren't meant to be "brought back". But I'm Scottish and therefore a bit mean, and plan to take it up Schiehallion soon. (What could possibly go wrong?)

For those of you who are now foaming at the mouth with hatred and anger, and shouting out words like "mental" and "irresponsible", I'd just like to point out that I've been to the top of Aconcagua, Toubkal, Kilimanjaro and Everest base camp, and I "ken fit I'm doin" !