Readers of a romantic disposition will not be disappointed...
Arriving at 11am after the usual early start in Yorkshire, the weather was promising, despite Hurricane Bertha's mooching in the North Atlantic. The straightforward route up Ben Vorlich was there, visible from the comfort of the car. The mountain was bathed in sunlight, fluttering it's eyelashes in the way of a scheming temptress, blocking out the bit of rough that is Stuc a'Chroin behind and willing me on.... 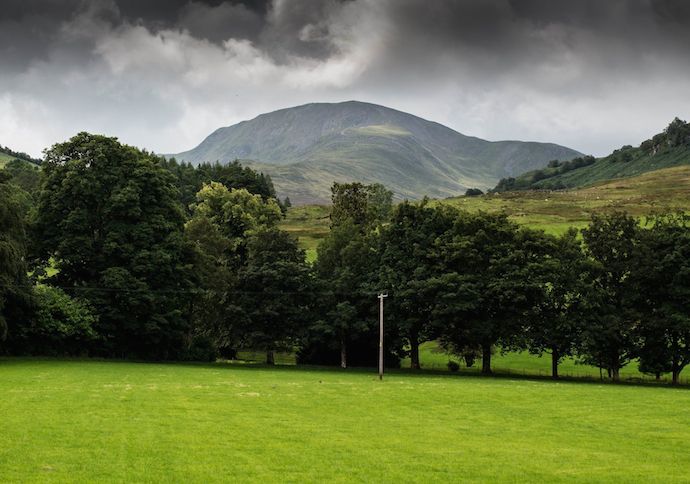 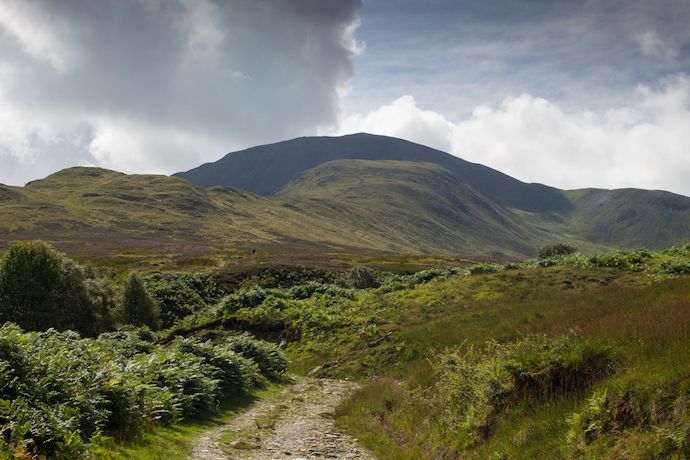 The route is very much as described on WH, and a really pleasant climb, never too steep but enough to keep you interested, and the top was gained in two hours exactly.
Despite it being a sunny August Saturday, I thought the hill was surprisingly quiet, and I made sure I chatted to most - having just watched the Munro show and seen Muriel Gray's plea to converse... one young lad was racing down as he had to get back to Hamilton for the first footie game of the season; oh the optimist that is the early August football fan, I'm sorry about the result... 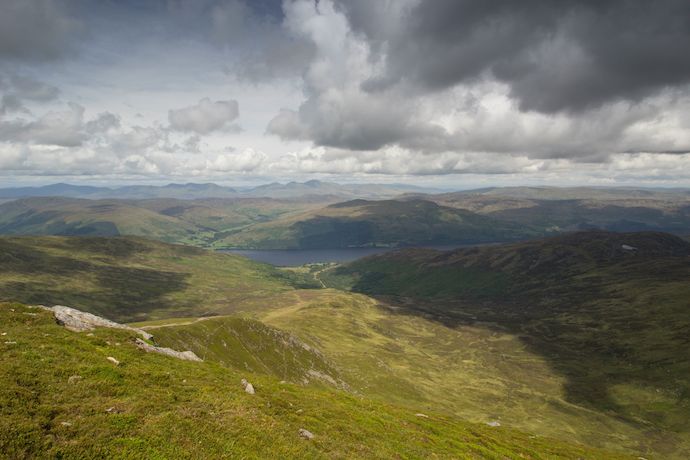 Looking back from the summit down the route. The Lawers range in the distance. 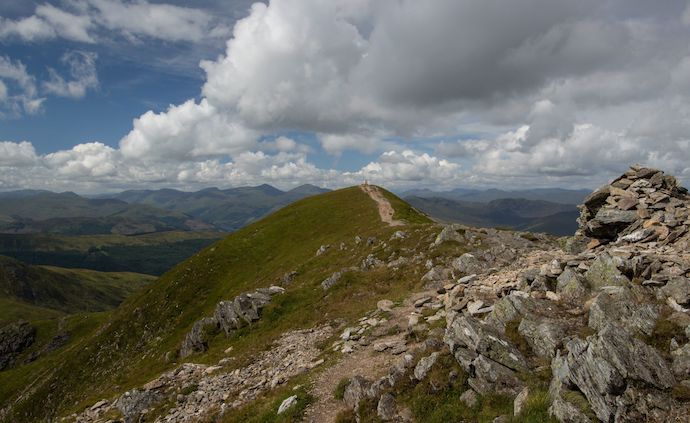 My last Munros were Fisherfield, and nothing will ever beat THAT view from A'Mhaighdean, but any Munro will have excellent views in the right weather, and Ben Vorlich was no exception. The best view though was the one across to Stuc a'Chroin, which certainly had an intimidating look to it (as I'd been warned by a descending walker), even in the sunshine. 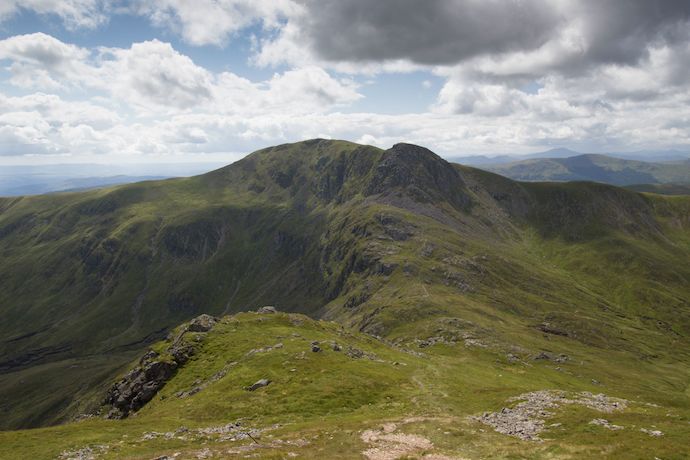 Stuc a'Chroin in all it's glory

But first... it was time for LURVE.... and how, baby! A young fella (Romeo) was up at the cairn with his girl (Juliet), and he very politely asked if I would take their photo on the summit with Loch Earn in the background. As I framed the shot he suddenly dropped to his knees (he'd chosen his spot wisely to avoid falling off..), whipped out a ring from his pocket and proposed to Juliet there and then! I quickly shot off several more photos, not least as Juliet had fallen over with surprise and shock - I felt very privileged to have part of a special moment in the lives of two strangers. Mumbling my best wishes for a long and happy union, I went floating on my way.... a bit disappointed the flash mob hadn't appeared...
For a moment or two I had impure thoughts of drifting back down the hill and copping an early ice cream in Lochearnhead, but I soon got a grip and decided to push on to the second Munro.
I went up to the base of the crag, looking for the route through... 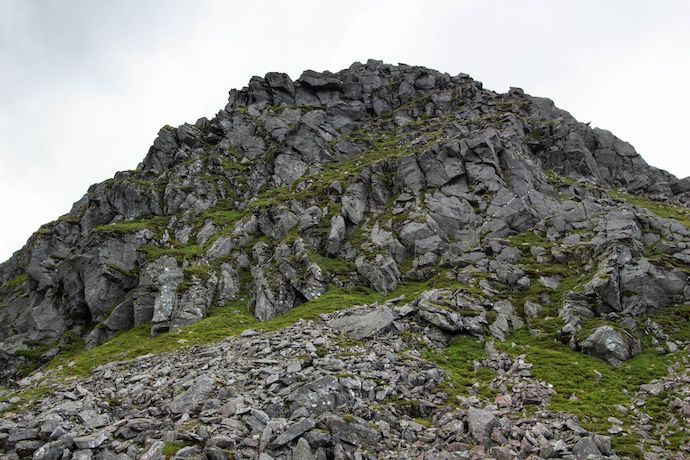 However, I picked up a path which went left (SE) through the boulders and then took a sharp and lung-wheezingly steep grassy gully to the summit plateau, keeping well to the left of the crags. I guess this would be a "fun"

gully in winter conditions, and it wasn't too bad in summer, a well-defined path throughout. Just steep.... 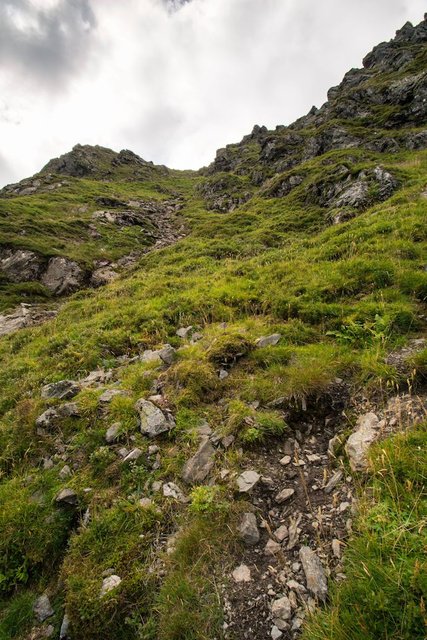 The steep grassy gully to the left of the crag. 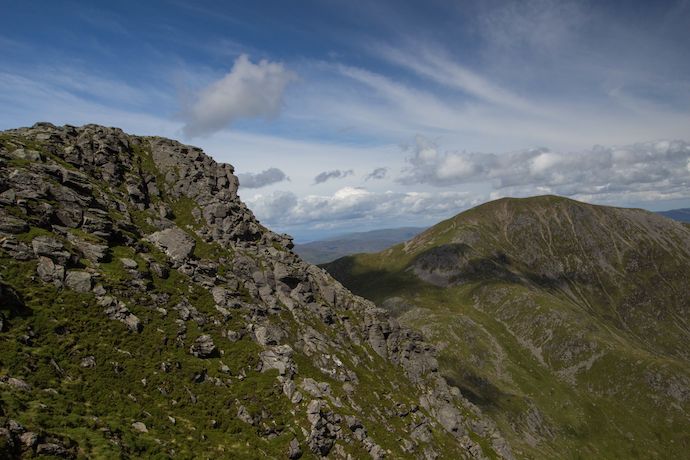 Looking back to Ben Vorlich from the top of the gully

At last the summit plateau was gained, and it was a 10 minute stroll south to the summit cairn. 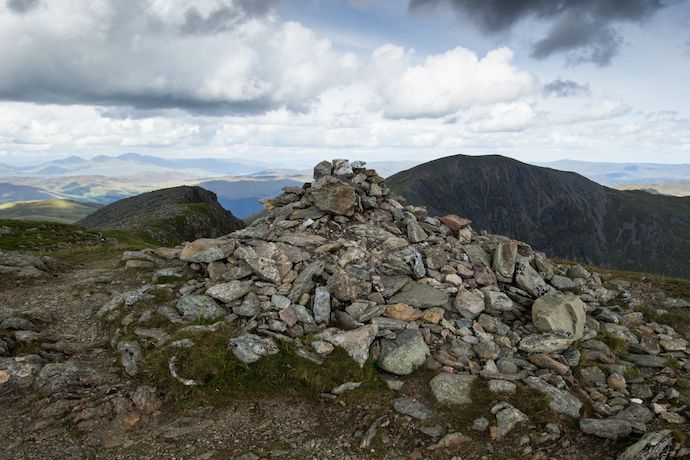 Looking back from the summit of Stuc a'Chroin 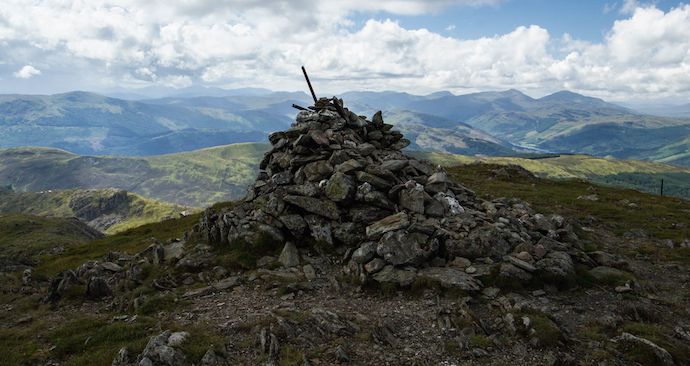 From the other cairn, looking west, Ben More on the right (I think..)

Walking back north from the summit cairns, the way down drops to the left to a point on the north-west ridge where a fairly tricky path descends to the coire. 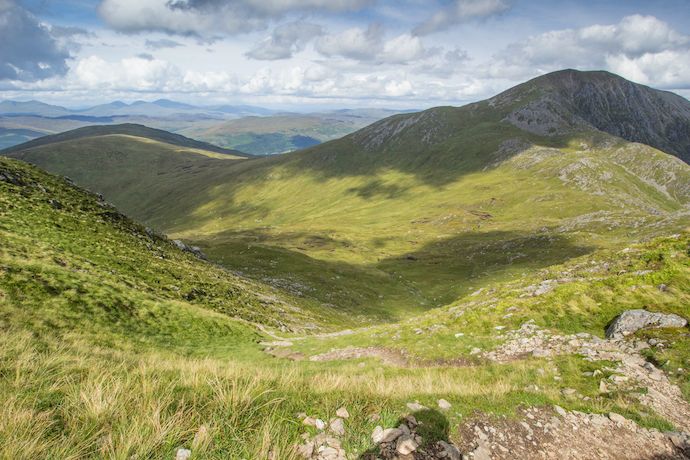 From the top of the steep descent path

The path is steep and not very grippy at the top, the posterior hit the ground at one point, good job about the padding. There's a fairly vague grassy track that courses round the coire to the north-west shoulder of Ben Vorlich. It's one of those annoying traverses that tugs at the ankles, not great but not too long.
The descent path from Stuc a'Chroin can be seen in the grassy gully to the right of the crags, descending from the low point of the ridge: 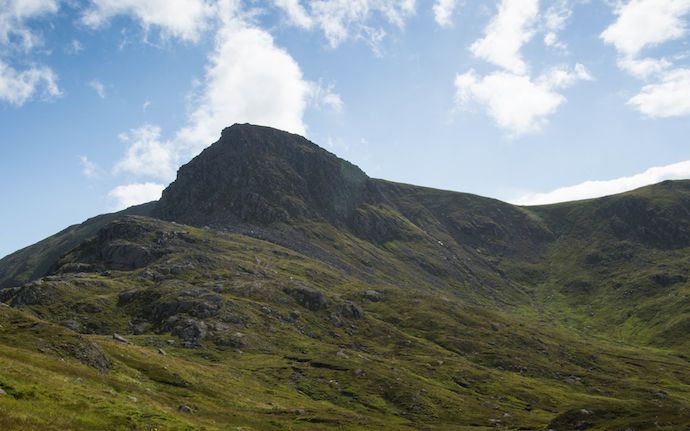 Looking back to Stuc a'Chroin

From the shoulder of Ben Vorlich I followed a rough and occasional path marked by a series of short stakes and joined the main ascent path lower down. The walk down in the dappled sunshine was a perfect end to the day. 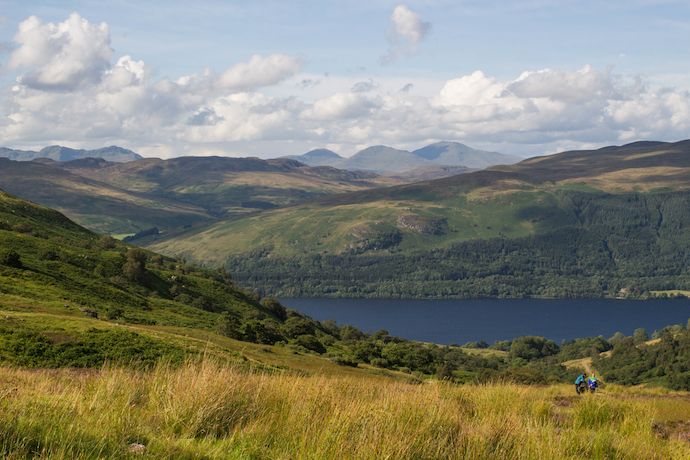 Loch Earn and the Lawers range in the late afternoon sun

So, very much a tale of two different types of Munro here, Ben Vorlich with a straightforward ascent, but a much tougher neighbour in the shape of Stuc a'Chroin, both in the ascent and descent. A decent big day in the end.

Oh, one other thing, she said "yes", so best of luck to you both!

Been up BV quite a few times & always enjoy the walk

What, no photos of the occasion? That's quite the experience on the top of a hill! Lovely photos.

Oh yes, there are photos, but they'll all be on his camera! No doubt they'll be posted on Facetube or some similar thing.....

Chuckling away here - enjoyed that

Great set of photos and an interesting tale - have seen various things on the hills but never a proposal ! - cheers

Brilliant photos and an excellent story...we tell the very same one! We are the 'Romeo' and 'Juliet'!!!
We treasure the photos you took of our very special moment, a keep sake we are so grateful to have. We were both a little 'head in the clouds' at the time, and have always said we wished we had taken more time to speak to you after. So we can now say THANKYOU so much for kindly stepping into impromptu photographer mode on the day ☺️ It really does make for an excellent engagement story!
The original photos were too large to share on here so the quality has been reduced...still, we thought you may like to see!