One of those silly off the cuff decisions prompted us to walk these two Munros it went something like,"look at this,there's two straight forward munro's we can have a go at on our way up to Kinlochewe" I was'nt expecting Denise to agree to this, considering the early start we'd made in case of holdup's around Glasgow because of the games, but I was met with "that's a good idea,go on then".So it was on and I was hoping I was'nt too tired after the drive up with still a fair distance to drive after the walk.
When we were nearing Balsporran Cottages I felt o.k,got parked up in the little carpark and set off walking at 11:30AM.Looking towards the mountains we could see that they were not a long way away and the path up was good and the weather was fair and visibility was spot on. Towards Geal Charn,the summit a little further on,hidden from view They don't look too far away

At first the track is well defined,we took the second turn off on the right as described in the walk description,this too is a good track a bit steep to start with but good underfoot.After a while the track turns into a path still obvious but wetter,we were lucky this section was dryish compared to some of the walk reports,this was probably due to the good weather this part of Scotland had had just of late.This path remains good all the way to the summit and it was good to have such a clear day.At the large summit cairn the views opened up over to Ben Alder,the Cairngorms and the Southern Highlands, although hazy we still got some good views. From the cairn we could see our next objective A'Mharconaich and we started off towards the bealach seperating the two. As we got lower it became obvious that some works were being done but had no idea what for,the track coming up from Balsporran Cottages looked like a road and there was a large digger parked up just below the lip of the bealach on the far side.
We got to the floor of the bealach and picked a path up which went directly up the slopes of A'Mharconaich and onto the ridge,we turned left on the path which comes from Beinn Udlamain (which did look invitingly close) and followed it to the summit of A'Mharconaich which soon came up. Towards the A9 and Balsporran Cottages

From the summit we could see where we'd been, all the mountains around were clear of cloud,we looked at Sgairneach Mhor and Beinn Udlamain wishing we had more time to include them,serves us right for rushing about. 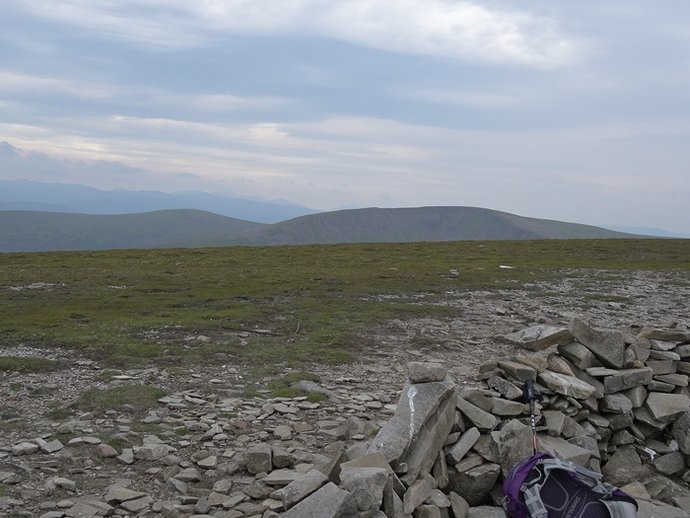 A rather flat view of Beinn Udlamain 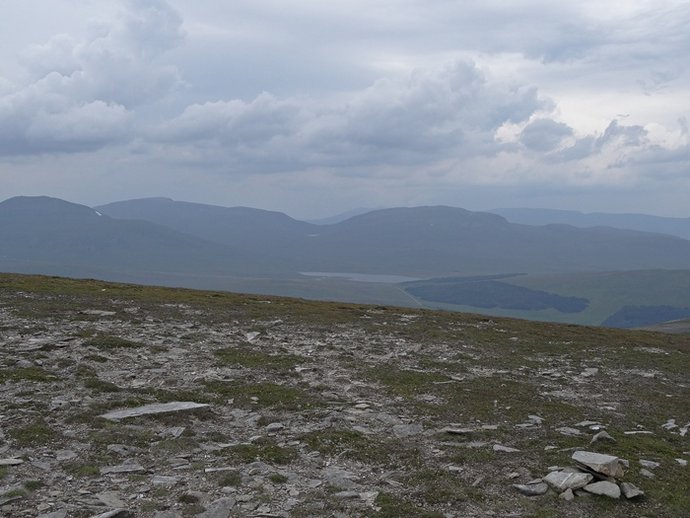 After spending ten minutes or so on the summit we turned or attention to getting down and continuing our journey north.From the summit,on a clear day,it's a nice walk down because the A9 and Balsporran cottages are in view all the time. The ridge down is pleasant walking and only becomes wetter near the end of the decent. And down to the cottages

When we got to the bridge that carries the railway over the Allt Coire Fhar we must of missed the crossing for walkers because we had to paddle across,which could have been fun if the weather was wet.
When back at the car we chucked the rucksacs,poles,boots etc in the boot and made our way to Inverness to do a weeks shop before onward to Kinlochewe.
This was an enjoyable walk eventhough it was rushed a bit, they may not be the best looking mountains,but they pack a punch in the view department and we're glad we took the time out to do them.