Torridon has always held a special place in my heart I've read so much about it but have never spent any time walking in the mountains. I was first introduced to the scenery when I was with a friend in 1978,we drove through Glen Torridon on our way down to Glen Coe from Ullapool,the mountains were completly clear and looked like something out of the lost world.I know that 36 years is a long time to spend not doing something about a dream but I suppose life gets in the way and things take priority.
When Denise and I were planning this years holiday's I suggested somewhere near Torridon so we could at least have a go at some of the more accesible mountains around this part of Scotland.My real dream was Liathach but I don't think I would want to tackle this just Denise and I,I'd rather go with a group of people who know the mountain,it would help my confidence.
So it was Beinn Alligin that was chosen for my first foray into the Torridon mountains,and with the forecast predicting reasonable weather we decided to go and say hello to it on Sunday our first day of the holiday.
The morning dawned with low cloud shrouding our view of Beinn Eighe and Slioch,oh'eck,not again! and it was raining,but the forecast was giving it out for improvment by mid morning so we had breccy,got the gear together and set off for the carpark just above Torridon House.When we got out of the car to get the boots on we were almost stripped to our skeletons by the midges,i've heard of the Torridonian Midges,they must be a seperate species as they can detect humans getting out of cars before the humans have thought about it.
After one of the quickest getting ready sessions on record we set off up the path to the left of the bridge,and I quickly turned back to check that the car was locked,the effect of midges fuddles the brain.
The walk into Coire nan Laogh is steep but steady with the views of Upper Loch Torridon opening up, 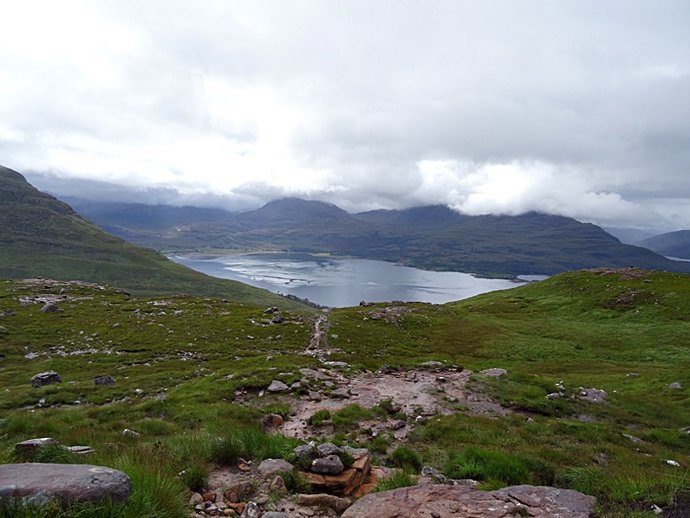 the path is good albeit steep.We could see the cloud level as we got higher and willing it to lift but,no,we soon ascended into the cloud,and that's how it was for most of the walk. 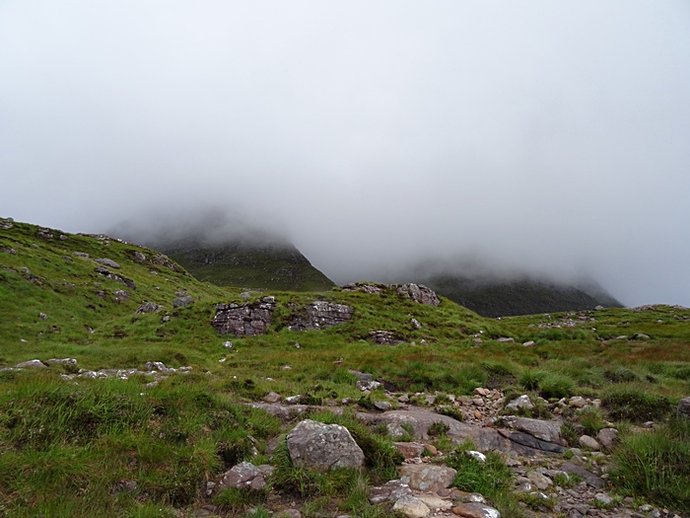 Up into the cloud 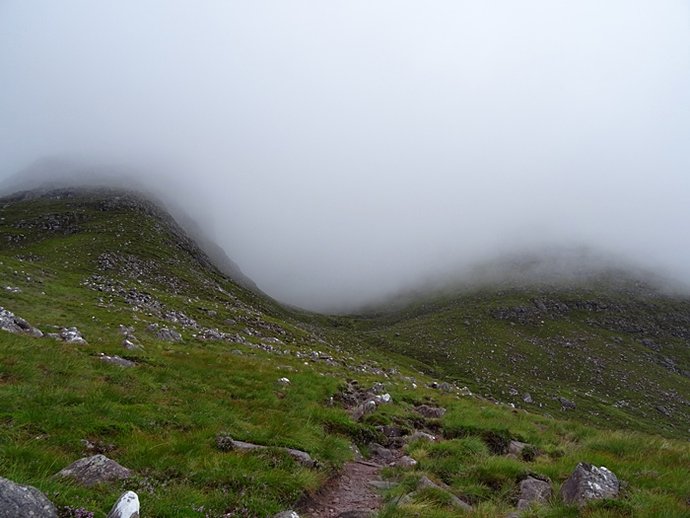 At the top of the path there is a cairn,at this point turn right up a stoney slope to the summit of Tom na Gruagaich which,even in mist is hard to miss as there is a massive cairn and trig on the top. 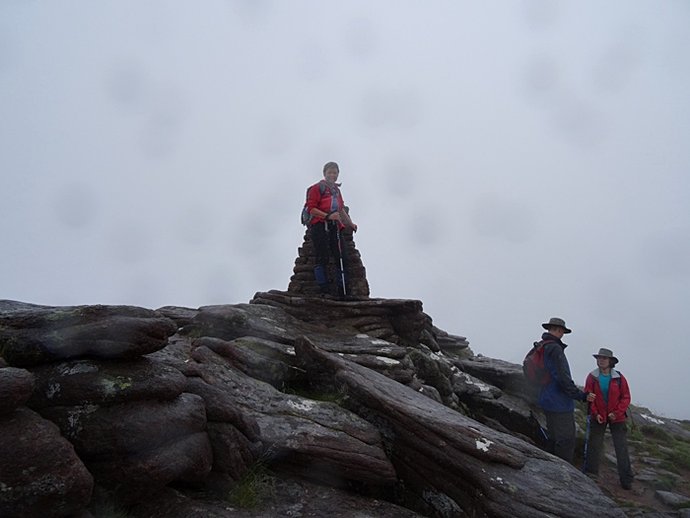 Denise on the summit of Tom na Gruagaich

From the summit head down the narrow ridge where there are a couple of tricky steps but nothing technical.If only we could have seen something because we kept getting the slightest of hints there was something special to our right.
We dropped into the col and had a look around,not seeing much but we could just make out the almost sheer mountainsides behind us and in front. 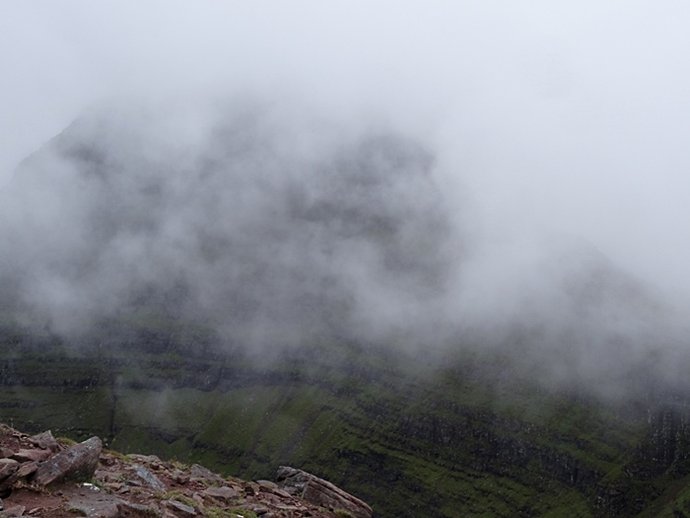 We wish we could see the surrondings 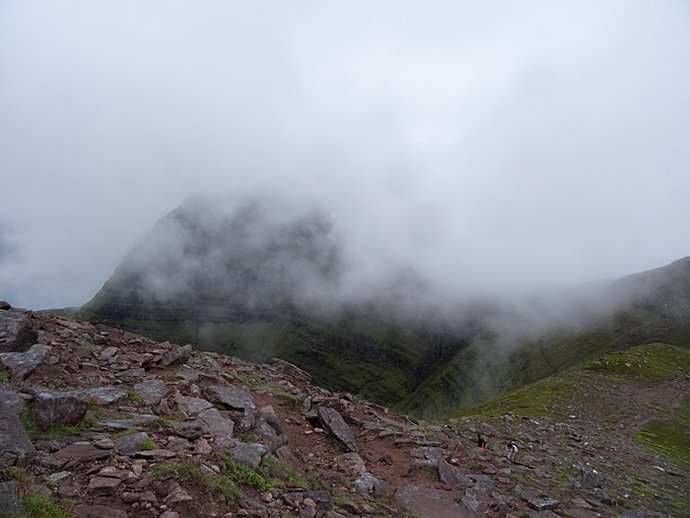 There is something special somewhere overthere

We had a snack then startad the climb upto the summit of Sgurr Mhor,when we got to the Eag Dubh an impressive gash in the mountainside,I was awestruck,even in the mist it looked fantastic. 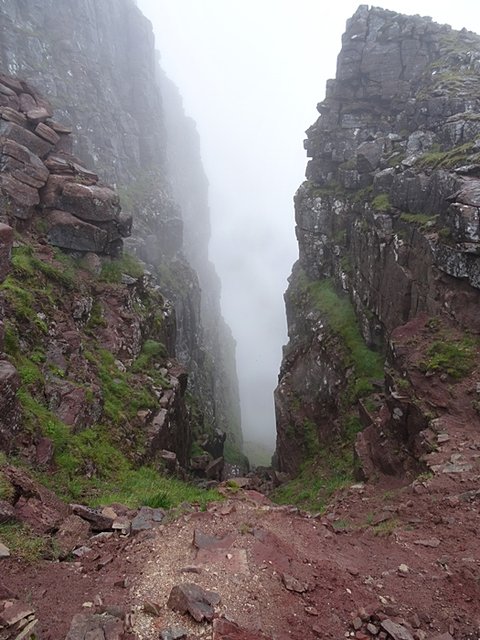 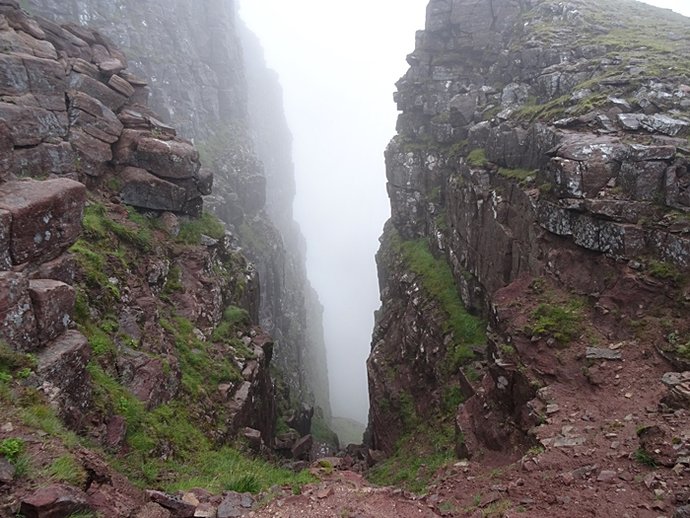 And again,wish we could see all the way down

Not much further on we were at the summit,had lunch and took the summit piccy,there would have been a lot to take had it been clear,ah well such is life. 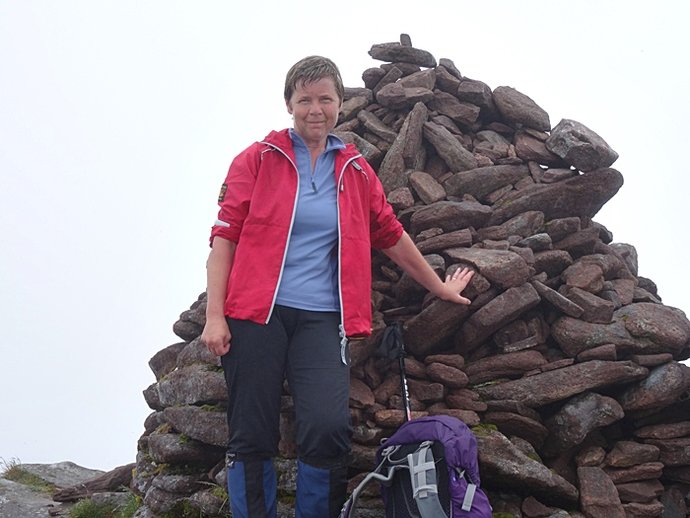 Denise on the summit of Sgurr Mor

The discussion now turned to the subject of the Horns,do we go over them or go back? We both agreed that we've come this far and nothing would be gained by retracing our steps,so we decided to give them a go knowing there's no escape route from them but with the mist the sence of exposure was lessened. 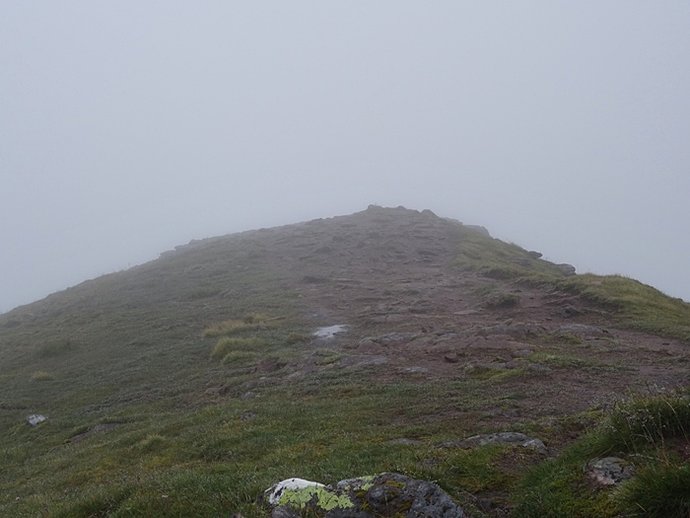 We set off down towards the Horns

As we decended to the first horn it started to rain.This was'nt an issue except I knew we were going to be slower because of it just incase the rock became slippy,as it was there were no problems just a shortage of photo's.The first horn was fairly straight forward,the second was a bit more scrambly and before we arrived at the third it stopped raining but we decided to use the bypass path.When we got round the third horn the cloud started to break up so I managed a couple of shots of Beinn Dearg as the cloud came off it,the other mountains remained in the cloud unfortunately. 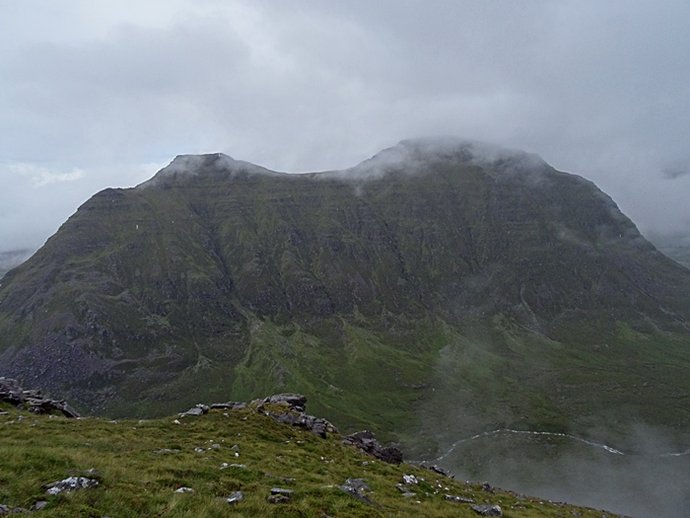 Beinn Dearg from the third Horn

From the third horn the descent begins, 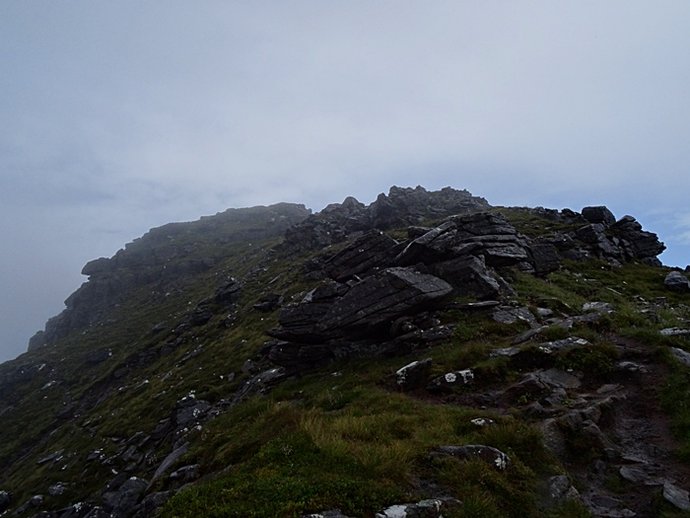 Start of the descent from the third Horn

this is quite steep, the path works its way through the craggy bits,so eventhough it's very steep,it causes no problems other than a bit of thought,the midges reappeared and plagued us for most of the way through the crags,at least they gave us something else to think about. By now the cloud had lifted quite considerably and we could now see the mountain we'd just walked over,it looked good from lower down I'll bet it's even better on top. 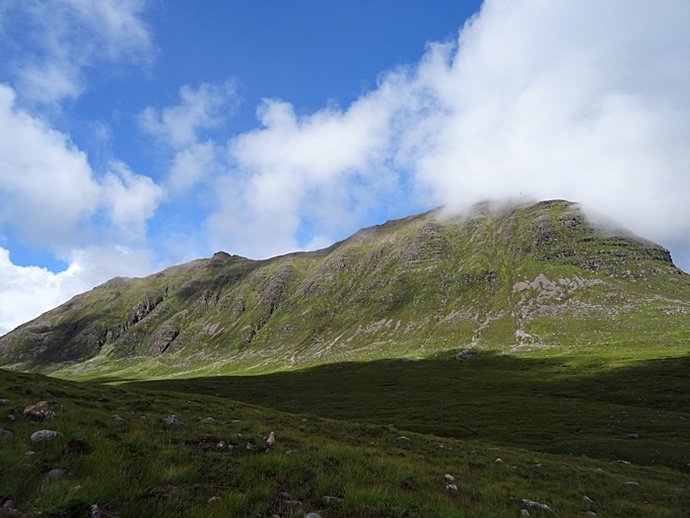 The weather always cheers up on the way down, Beinn Dearg 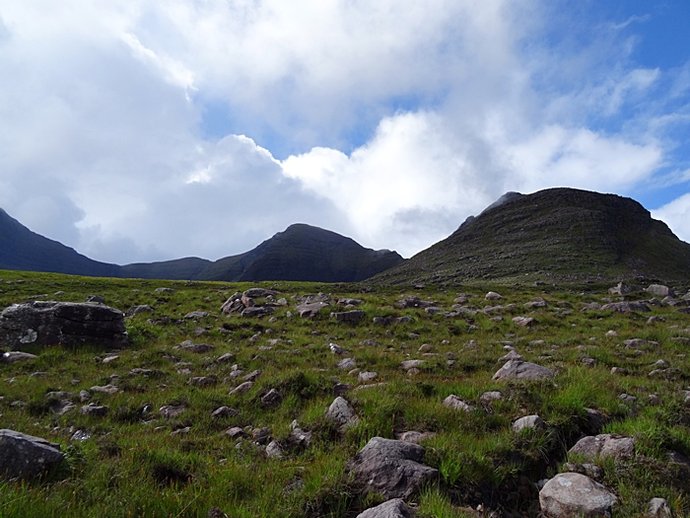 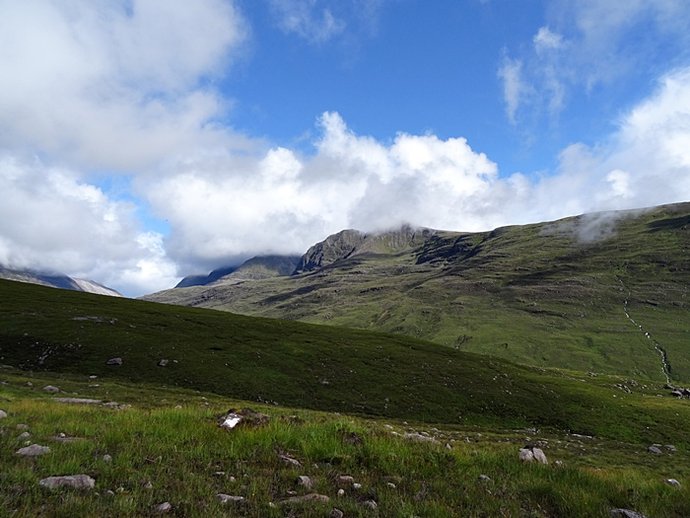 Towards Liathach a lot flattened by the wide angle 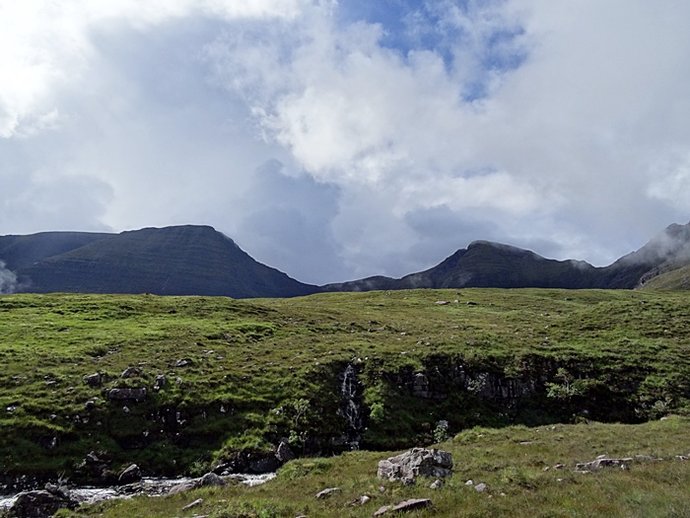 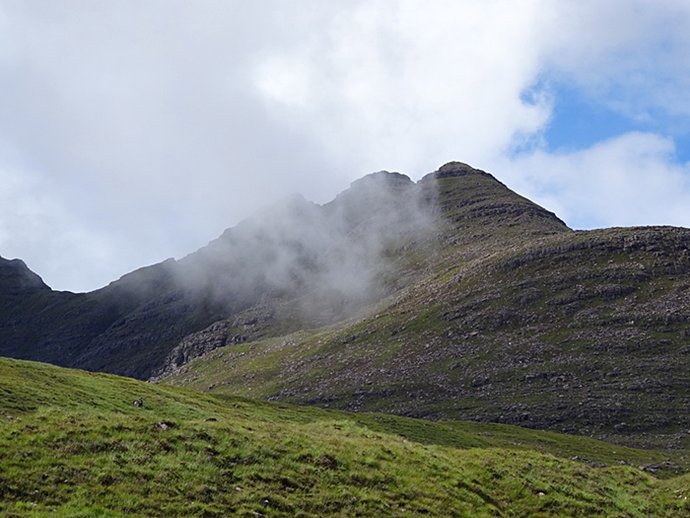 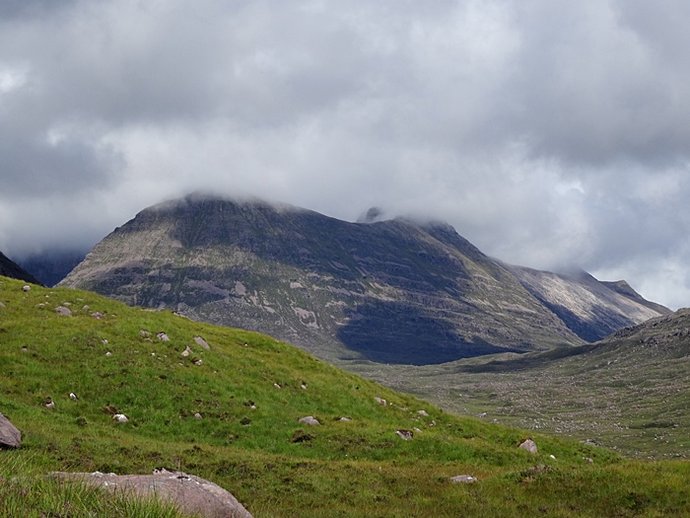 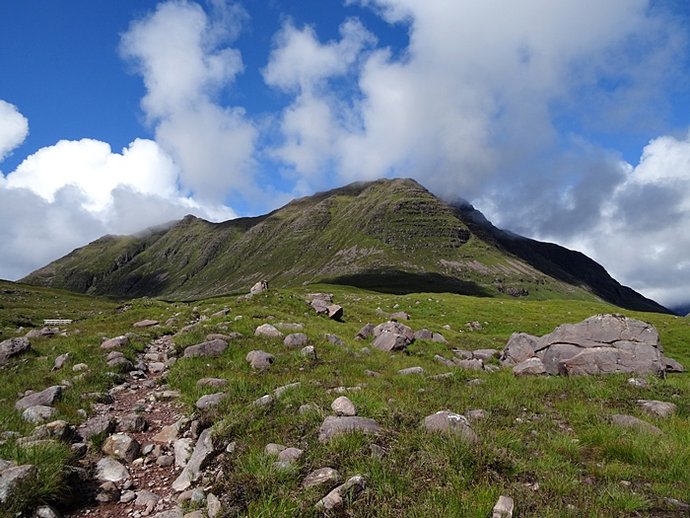 The walk back to the car was nice enough now the sun had come out,there's some nice waterfalls on the Allt a'Bhealaich which would be really impressive with more water in them. 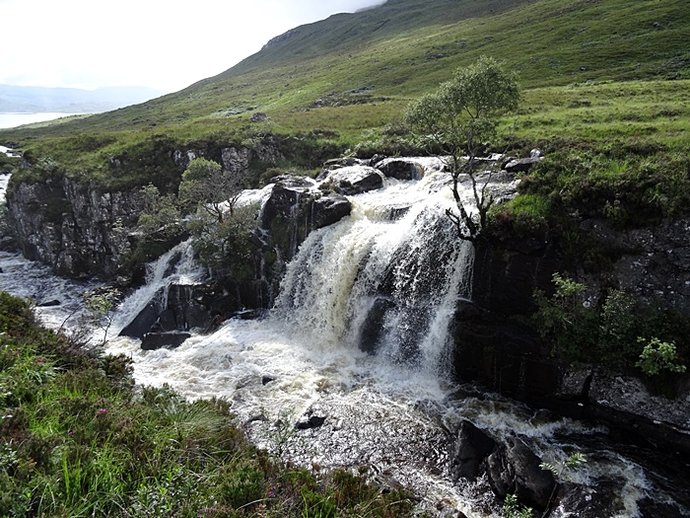 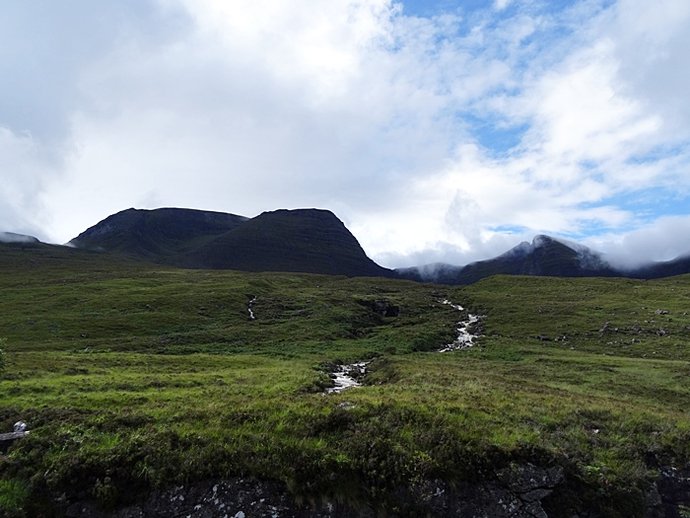 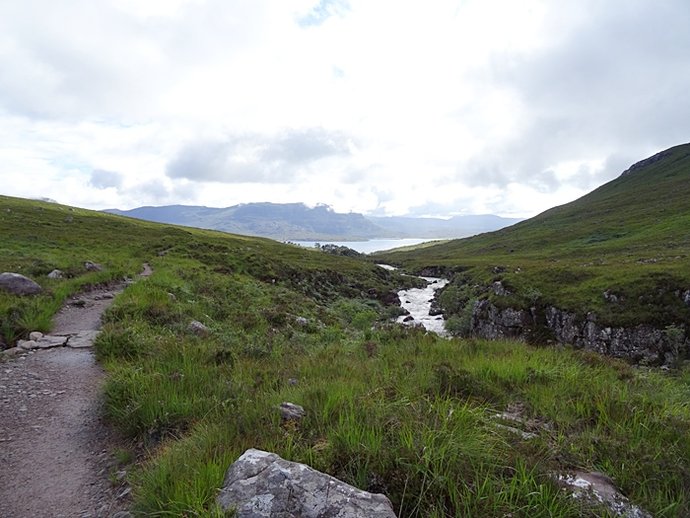 When we arrived back at the car the midges were waiting for us knives and forks poised,so it was with no messing about,the boots and everything else were chucked into the car and off we went,scratching ourselves raw.
Despite the lack of views etc,etc we had a good day,Beinn Alligin is another one added to the "must do again in better weather" list,but i'm sure it will be worth it.

Good stuff guys, you got a good few walks in on your holidays then. Will be using your reports for reference for myself. We're the Horns ok for the dogs you think?
Cheers and well done

Hi Matthew, yes we had a good holiday, thanks. Knowing Roy and Lochy they would have no problems with the Horns that a helping hand wouldn't solve, there's a couple of tricky down climbs especially off the first Horn but the bypass paths looked ok if you're happy to send them ahead on those, but it's a good fun mountain even in the mist.

Martin. That is a good collection a reports from your holiday in the north. Well done.
Need to get into that lot myself still and reading these has given me some impetus to get up there.

Hi Steve, thanks for reading. Yes it's a fantastic part of Scotland, great mountains.

Preparing for my first trip to Torridon, your account has somewhat calmed my nerves and photos have reassured me that it is possible. I think its just a case of they are not my usual hills and a wee bit aprehension, probably not a bad thing keep me on my toes and aware of whats around me or not as the case may be on the exposed bits.
Really looking forward to my wee adventure next week. Have ridden thru the area many times but this is the first time hiking.

LJgee wrote:Preparing for my first trip to Torridon, your account has somewhat calmed my nerves and photos have reassured me that it is possible. I think its just a case of they are not my usual hills and a wee bit aprehension, probably not a bad thing keep me on my toes and aware of whats around me or not as the case may be on the exposed bits.
Really looking forward to my wee adventure next week. Have ridden thru the area many times but this is the first time hiking.

Hi there Ljgee, first of all, I hope the weather treats you kindly and you get the right conditions for your visit to Torridon next week. The mountains themselves are great and you'll enjoy every moment, even the exposure, Liathach is the one I would really like to do, we're saving that one for a good clear day, if you manage to do Liathach have fun, take care and enjoy the mountain. Have a good trip.