Staying in Kinlochewe gave us a daily preview of how the weather was shaping up over Beinn Eighe and on Monday we woke up to clear blue with whispy clouds covering the tops of Sgurr Ban and Sgurr nan Fhir Duibhe,the sort that would burn off as soon as the temperature started lifting,it had already started to reveal Slioch so our planned visit to the great Beinn Eighe was on.
Trying to decide which way up would be best I looked at the map and decided to park in the large carpark off the A896 at NG95755685 and walk to the start of the path going up to Coire an Laoigh thinking that,once down, we were at the car at the finish of the walk.
So this is what we did,the walk along the road to the start only took 20 mins or so,the path starts down from a small clump of trees by an imformation board.It climbs steadily all the way up to the Coire, steepens near the top,and finishes by a large cairn.From here turn right up a stoney path to the trig point on Spidean Coire nan Clach,take a breather and then move onto the summit proper which is a little further on the ridge to the right. 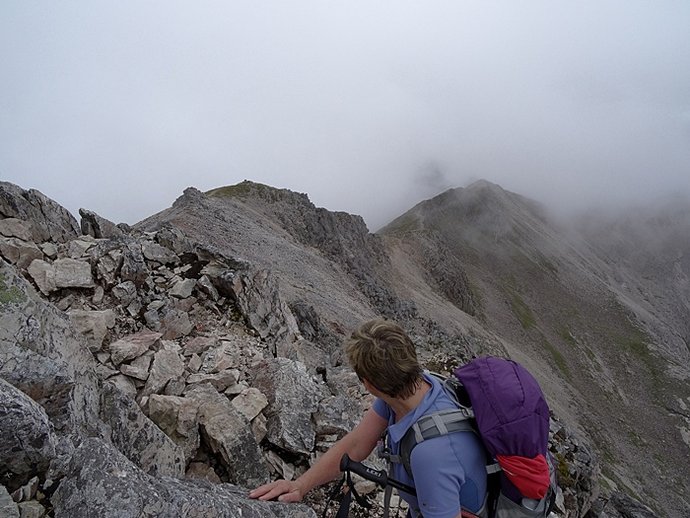 Denise on the ridge heading towards the summit Misty views from near the summit At this point on our walk the clouds were still over the summits so we did'nt get the views from here but we did get the odd glimpse of Ruadh-stac Mor,Coinneach Mhor and Sgurr Ban through the mist,it looked otherworldly and mysterious, Something hidden and mysterious

when we got back down to the trig the way forward along the ridge seemed to disappear,it felt very pioneering. Heading into the unknown

The walk along the ridge from here is very straight forward over loose scree and boulders,the path is never hard to follow, even in the mist,and when we got to the bealach before the climb up towards Coinneach Mhor the cloud rolled away from the left hand side of the mountain to reveal Coire Dubh Mor and just the top of Stuc a' Choire Dhuibh Bhig on Liathach, We could even make out the carpark but not our near neighbour Ruadh-stac Mor,not just yet anyway. 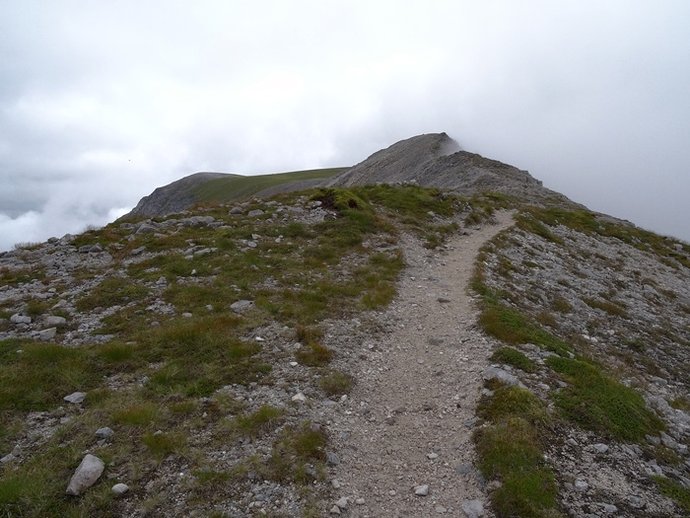 When we arrived at the cairn marking the top Coinneach Mhor and the path coming up from 868m bealach above the descent route the clouds as if on the orders of him up there suddenly just disappeared and we got our first proper views of the day and,wow, what a place,this is why we do it,all this climbing up moutains to get views of this,pure nature in the raw. Just before the descent into the bealch the mist started clearing Views on the way upto the summit of Ruadh stac-Mor where we had lunch and just looked. We could see Ruadh stac Beag,Sgurr Ban,Sgurr nan Fhir Duibhe and Creag Dhubh on one side,Beinn a' Chearcaill,Beinn an Eoin and Sgorr Dubh on the other and much more,too many to mention,centre stage was taken by Triple Buttress and the cliffs of Sail Mhor, I took loads of photo's, what a place,just magnificent. Views from the summit,Triple Buttress Eventually we had to turn our attention away from the fatastic vista and start our way down.From the summit re-trace your steps to the bealach Looking over to the bealach and the start of the descent More views on the way to the bealach Pano of part of Beinn Eighe,it's a big mountain.

and start the steep descent down the scree gulley keeping to the right where the going is more solid,eventually getting to the bottom and then picking your way down to Loch Coire Mhic Fhearchair.We found the remains of a Lancaster Bomber which crashed here in 1951,not much of it left but the piece of fusilage we saw was obviously visited because it had poppies placed in memory of the 8 crew killed in the crash. Some of the wreckage. People do still remember the crew

From here we could see the path leading around the edge of the loch towards the outflow, once there the path back to the road is plain,long and quite tiring but,however, the interest is maintained by the sheer bulk of Liathach looming above us. It is a long walk out but, on reflection, I think personally that I'd rather do this portion at the end of the day rather than the beginning.
We had a fantastic day on Beinn Eighe a fantastic mountain,I can see why people hold it in high regard and I am now one of them.