A first trip to the Southern Uplands took us up beautiful Moffat Dale to the horseshoe around Blackhope Burn. The flood plain full of lush green fields surrounded by lofty mountains strongly reminded me of northern England - another contrast to the more familiar Cairngorms.


hart-fell.gpx Open full screen  NB: Walkhighlands is not responsible for the accuracy of gpx files in users posts

If the uplands south of the Central Belt have a stereotype of rolling, gentle hills, Moffat Dale must be an exception. The hills surrounding the valley are steep, high and relatively rocky, with impressive rows upon rows of perpendicular feeder streams cascading down deep valleys of their own before reaching Moffat Water itself. We left the A708 by heading through the gate just to the west of the road bridge over Blackhope Burn, and an intermittent path led up tussocky ground towards the cleft dug out by Hang Burn above. Tussocks turned to dense ferns, but a narrow, overgrown but obvious path led through them to the cleft. By the cleft there was another, damaged gate which had to be stepped over, beyond which a couple more paths led upwards. The one directly up the fall line soon fizzled out, so we retraced our steps to near the gate, instead trying the one to the right. This traversed the hillside without ascending any more. Beyond a small area of scree it actually started to descent, so we abandoned it and headed directly upwards. Fortunately the ferns were over to the left by now, but it was very steep - slippery ground ensured hands had to be used! 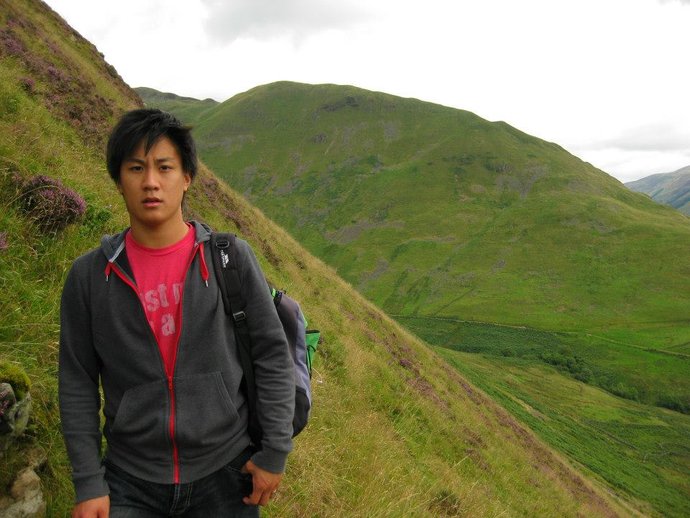 At about 350m the ground abruptly levels off, with a tiny lochan and a few surprised sheep. 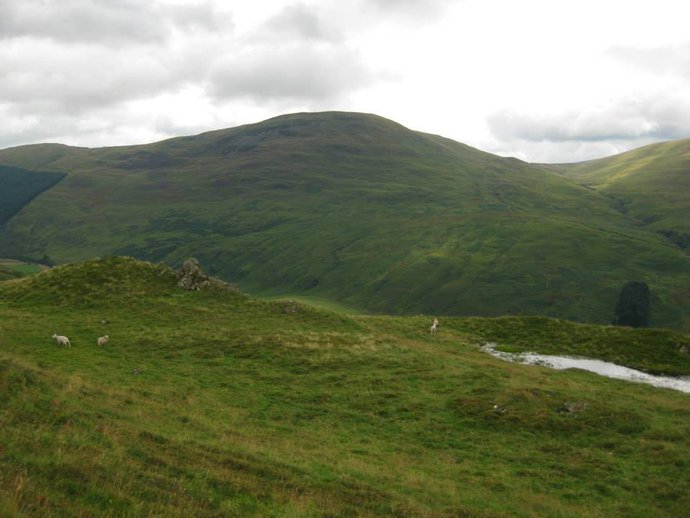 We carried on following Hang Burn uphill, with occasional traces of a path. The water course is attractive, with one reasonably high waterfall. 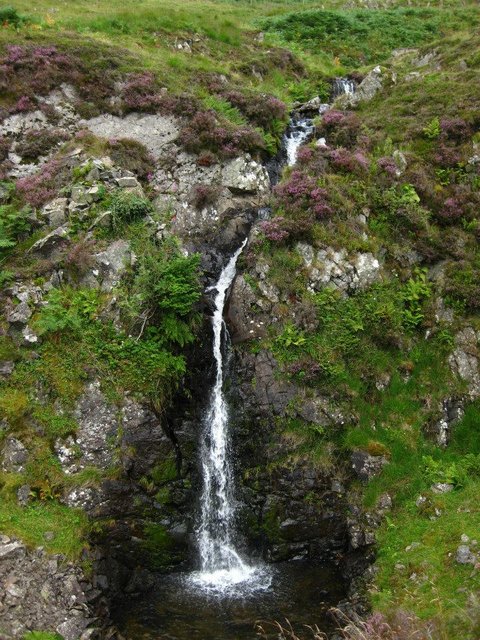 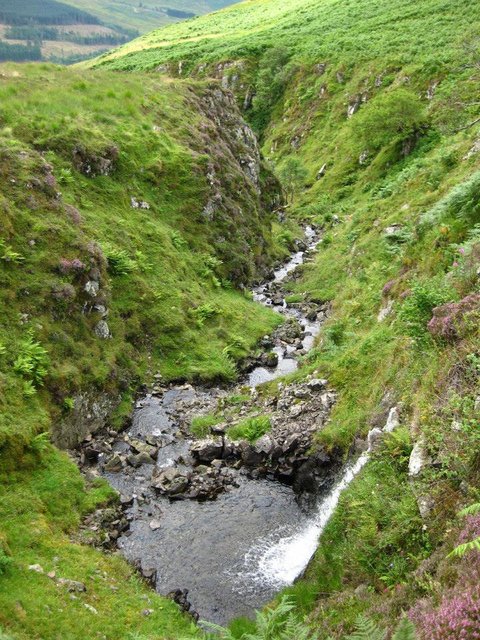 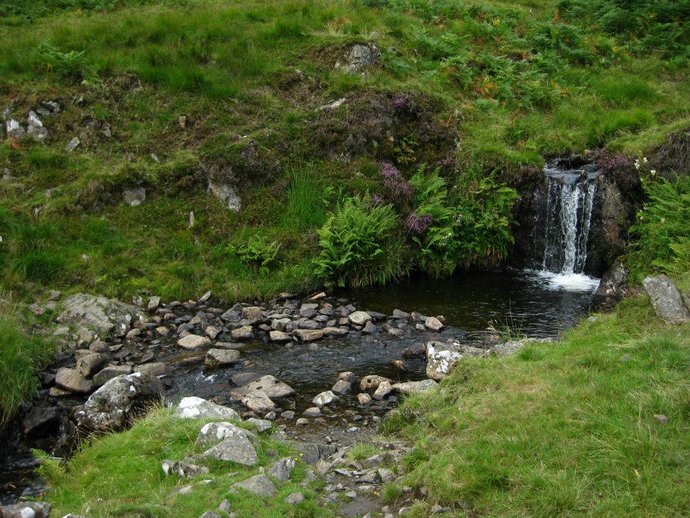 Onwards and upwards. Grass changed to heather, and suddenly heather flies with long hanging legs were everywhere - another similarity to some past Lakes walks! They didn't bite though - deep vegetation and uneven ground was more of an annoyance. The hillside was criss-crossed by sheep tracks, but like most sheep tracks, they all traversed the hill rather than climbed it.

As the dropoff to the right steepened at about 550m, we finally found a reasonable path. This stuck to the edge of the cliffs and had an excellent outlook over Blackhope Burn, with Saddle Yoke looking impressive. 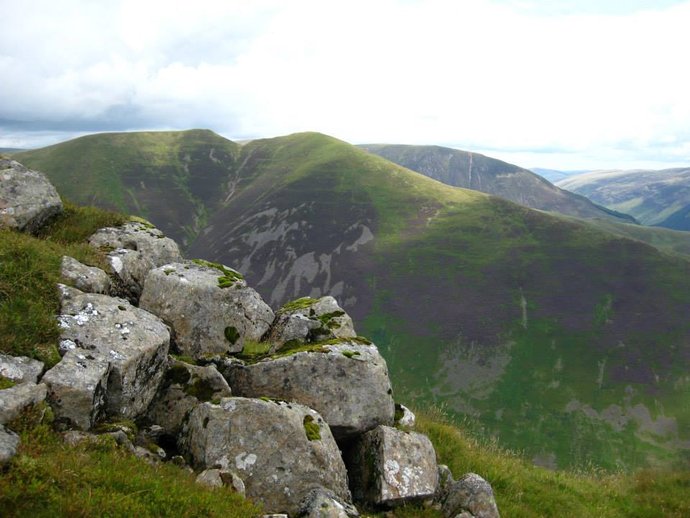 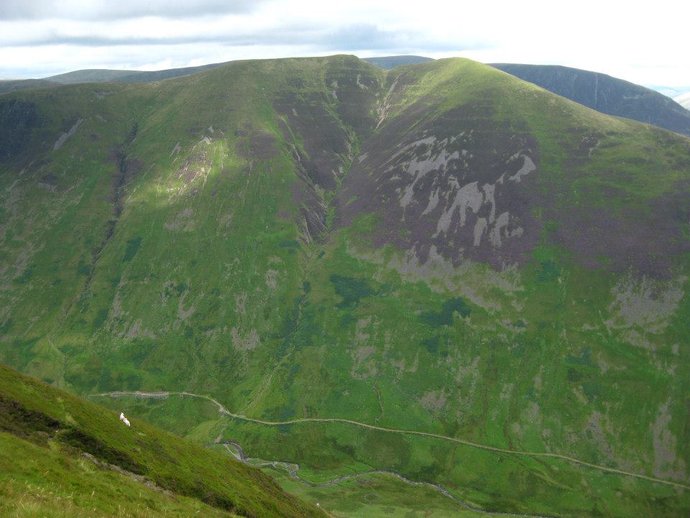 It was nice to reach 700m, as this marked the end of the constant ascent! There was a keen wind from the northwest. Turning initially west, the path became fainter again and slowly curved round to the right to reach Swatte Fell - a flat, insignificant swelling but apparently a Donald. Once again, the best views were towards Blackhope Burn. 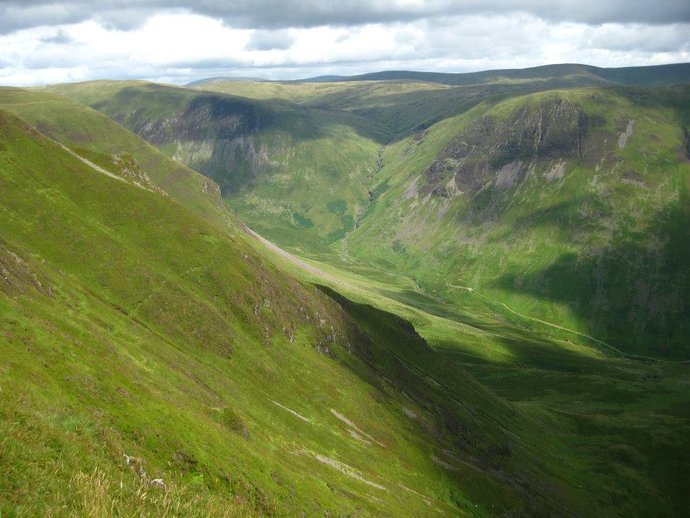 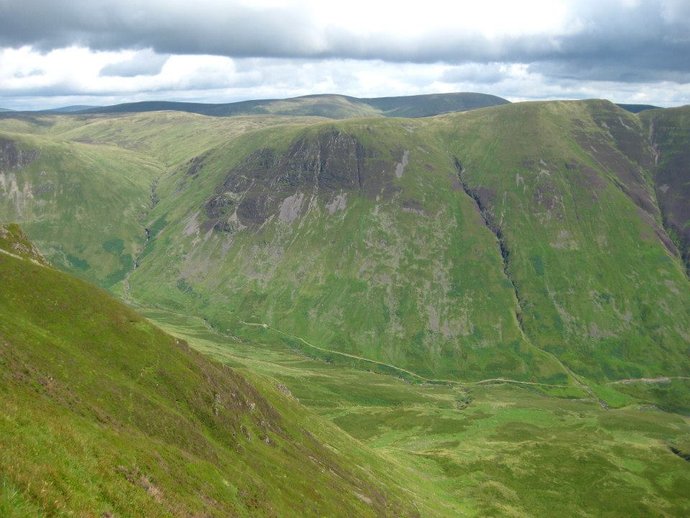 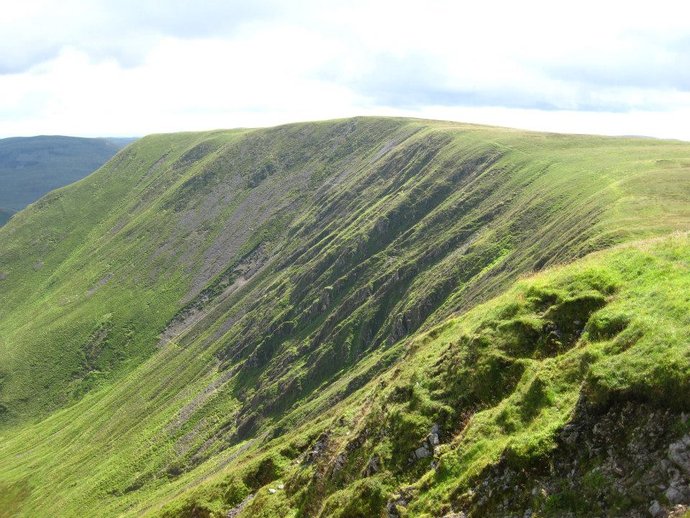 Continuing northwards over Falcon Craig, there was a short, steep descent to 700m before the final climb to Hart Fell - initially thigh-burning, but soon flattening out. The summit was another flat one, but had a good windshelter so made a great lunch spot. There were good views north and west, towards Fruid Reservoir: 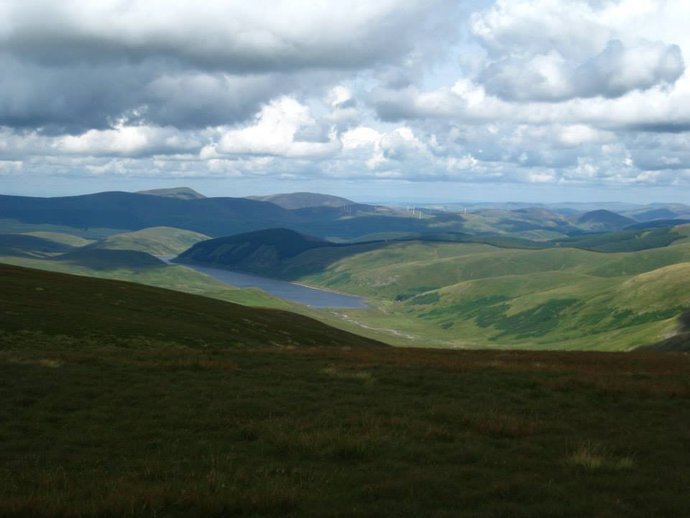 Turning east, the wind was now behind us and we made good progress down the fenceline over Hartfell Rig. Beyond here, the Whirly Gill made for a whirly big descent too (hoho), although staying north allows you to reduce the height loss. The areas has a lot of watercourses and boggy areas, but these were easily avoidable - more of a hazard were random holes in the ground - some deeper than an person - at the bottom of which subterranean streams ran! 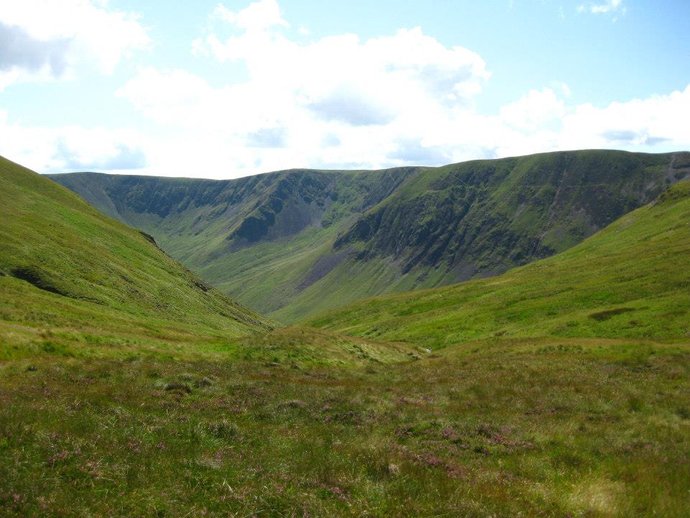 ...beyond which another tiring ascent began. Looking back: 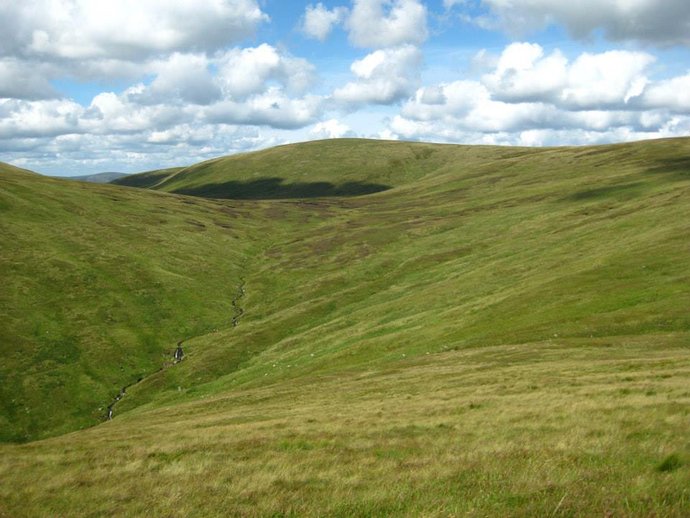 Sunshine was breaking through more widely now, and Moffat Dale came back into view near the top of Under Saddle Yoke. 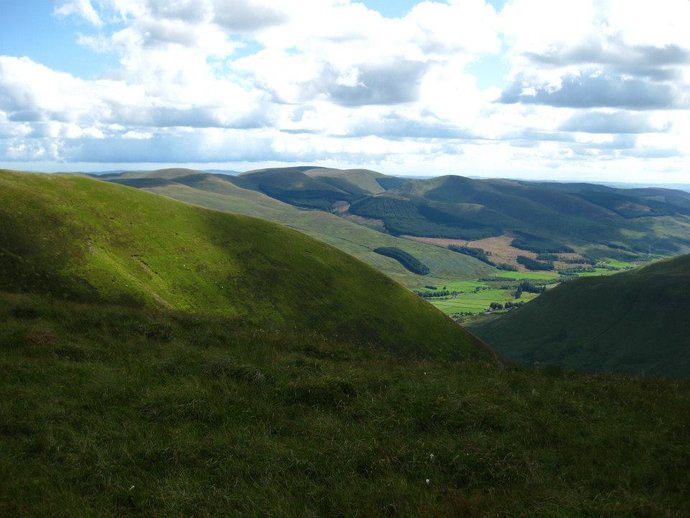 Now, Under Saddle Yoke and Saddle Yoke are undoubtedly attractive, pointy summits, but the ridge in between them was much shorter and less dramatic than expected. 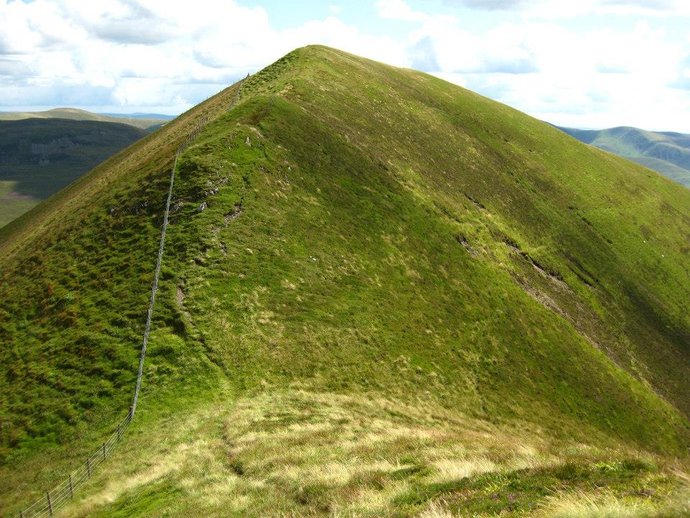 The best part of this little ridge is the view down Nether Torr Gill to Blackhope Burn 500m below. 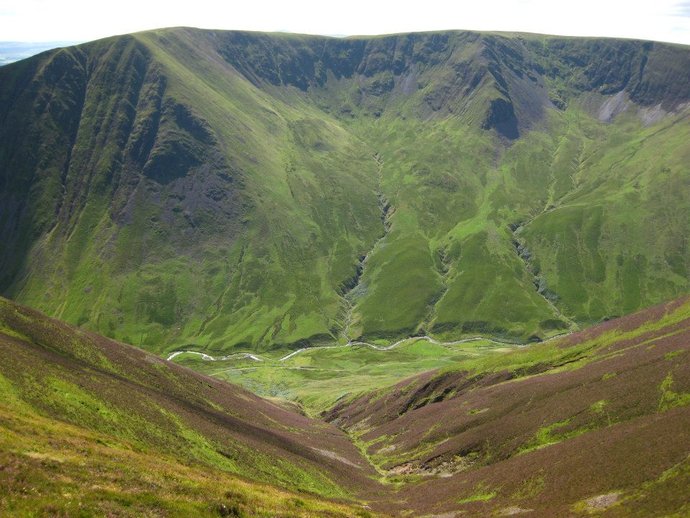 The reascent to Saddle Yoke was also shorter than expected, which was welcome - despite its name, Under Saddle Yoke is actually the higher of the two summits. 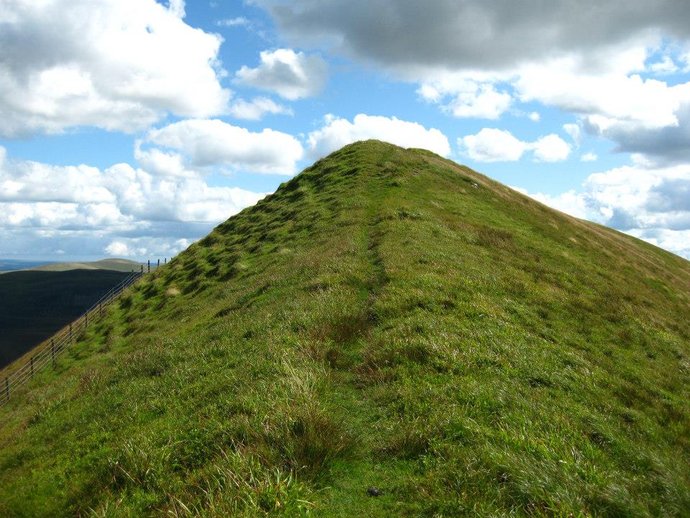 The rest of the walk was the highlight of the day. Lots of sunshine, great views, and a steady descent on a good path. The Ettrick Hills (I think) on the other side of Moffat Dale looked enticing. 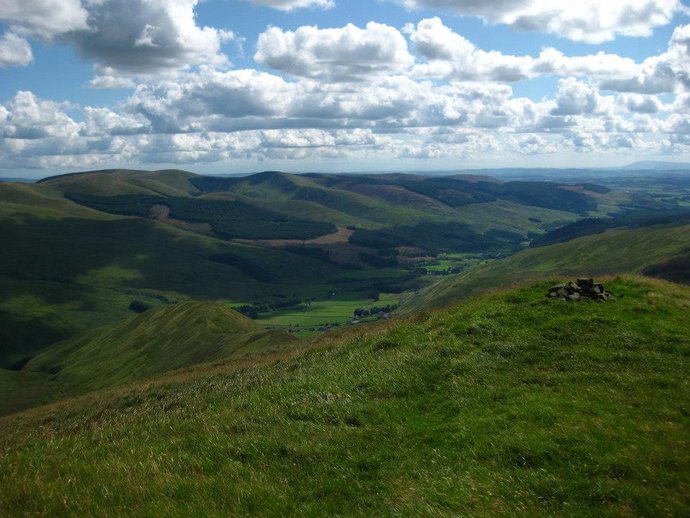 Finally the path steepened again on the last descent to the valley track, only fading a few hundred metres away from the valley floor. 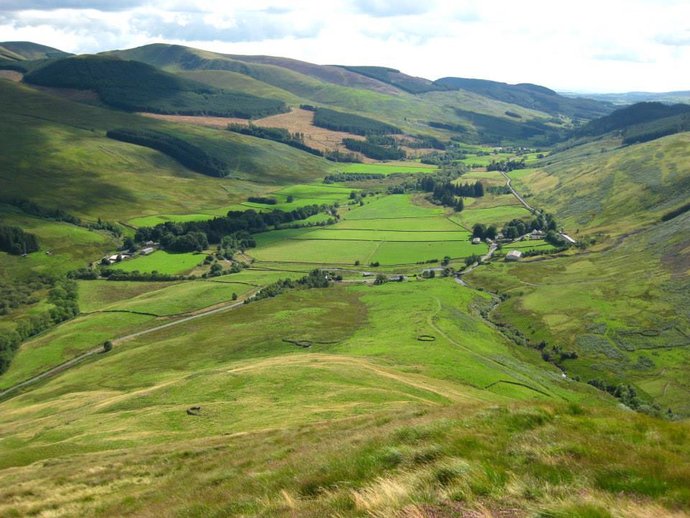 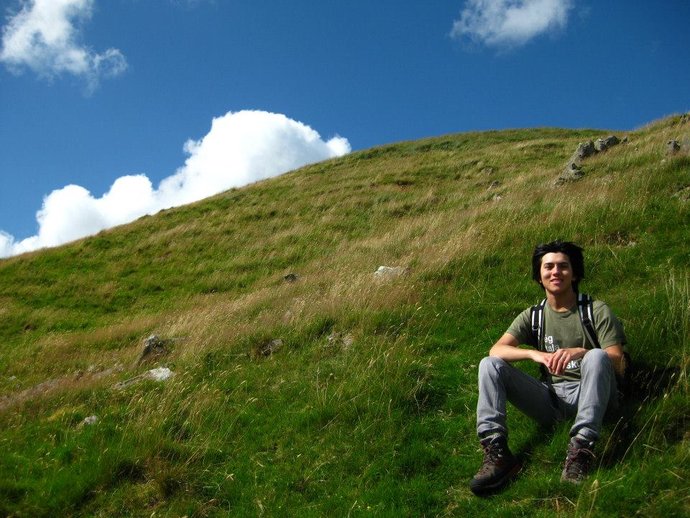 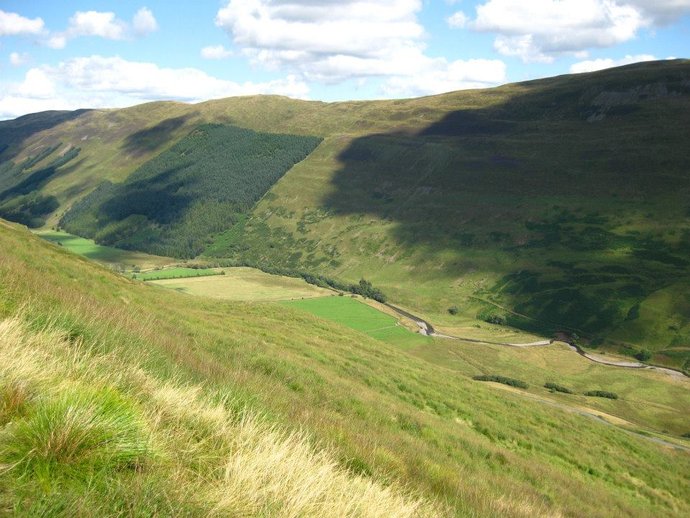 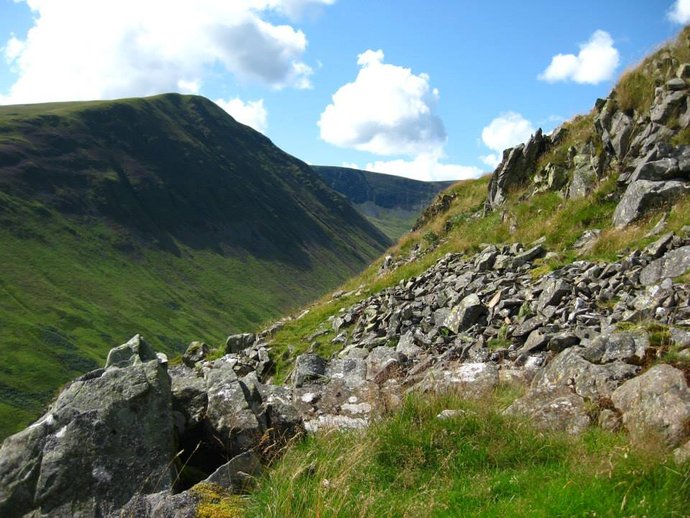 From the valley track, its only a few minutes walk back to the road and the car. Looking behind, you can see the whole day's walk - rougher going than expected, particularly the ascent to Black Craig, but the whole valley is impressive in scale and definitely worthwhile! 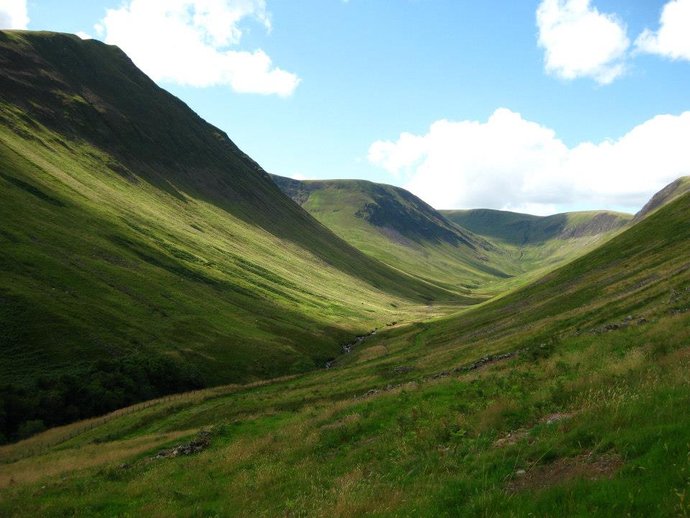 Good description and great pictures. Don't like the sound of holes in the ground though!

Nice report and photos. But didn't you walk that on 9th Aug, not 16th 3 days after you posted this. I met you as you dropped down from Hartfell Rig to begin your ascent to Saddle Yoke. I was heading down Whirly Gill. I did get to the bottom before you as I saw you on your final descent as I drove off.

Hope it's not your last visit to the borders as the hills here are as interesting as some above the highland line. You've done 3 Donalds, only 86 to go!

Good point! Date changed now. We didn't see you leave the valley, are you sure you beat us?

Undoubtedly; saw you coming to the end of the ridge as I got into the car. Remember that you still had ascents over moorland and I had a steep descent and a flat walk out. Was actually quite aware you weren't in sight as I left the glen so kept looking for you. But all in all it was a good day and nice to meet you - albeit briefly.

Haha I was only joking!

Great report and photos. Much easier to pronounce those hill names than the Gaelic ones (for most people)! Whirly Gill

Love the photo descending into the valley.

looked like a great day, have always wanted to do this one, so this is a great reminder why.