Welcome to the jungle

Welcome to the jungle


Welcome to my report (nothing to do with Guns n Roses) on a tough day out in the west, weather could have been better, in fact much better

The intrepid explorers for the adventure were Cat (cmarcol) & Simon (simon-b), Simon was back north of the border for yet another 2 week holiday

One big difference with his holiday this time is the weather, instead of bringing warm dry weather, he has dragged up wet, wild & windy weather - named by the meteorologists as Hurricane Bertha

Simon posted his 'wish list' prior to crossing Hadrian's Wall, unfortunately it has not started off very well, those of us lucky enough to live in Scotland can only offer our sympathies to our fellow walkers

The plans for the walk were hatched via pm's with an invitation posted to all about 3 days before the walk, but sadly no one else fancied our company

I had arranged to pick Cat up at 7am but as usual I was early again, sorry

Arrangements were made to meet Simon in Tarbet at the hotel at the road junction, it seemed the obvious place as Simon was staying in Killin & coming south down the side of Loch Lomond from the north & we were coming from the far east & heading north from Balloch.
We met at 8.30am & decided to leave Simon's car in the car park opposite the hotel & travel in one car. We struggled to find the parking area as described by WH & abandoned/parked the car in a layby on the tarmacadam road that is actually the start of the WH route.
After a brief huddle we decided our route, I wasn't really much use at this stage as I had forgotten my map & compass

Cat had 2 compass's which were giving slightly different readings, so after checking with Simon's compass the dodgy one was left in the boot The way ahead, note the lowish cloud The locals tucking into breakfast

We were planning to follow the WH route to the letter, so the first 7km were along an excellent tarmac'd road, had I been doing this walk alone I would definitely have brought my bike. The 7km took about 70 mins whereas using a bike you could probably do it in 20 mins, give or take a few minutes

That part of the walk was very pleasant, the road was almost flat & gave us a good chance to have a good chat

Once past the old house on the left, we then left the road/track & headed uphill, we knew and expected the conditions underfoot to be a bit 'damp' but it turned out to be much wetter than I certainly anticipated This is the point where we headed uphill, Simon taking a photo of the way ahead, Cat looking at the undergrowth

The trudge uphill was not very pleasant, not only was it muddy & slippy underfoot, but the bracken which was shoulder high was wet, so we took it in turns to be leader & get a bit of a soaking The ascent through the jungle

After about 10 mins heading uphill we spotted some fellow walkers following us who we would meet later.

The ascent up to Meall an Daimh on a nice dry day after a dry spell would be very enjoyable, but after the recent deluge all the vegetation and rocks were damp and great care had to be taken 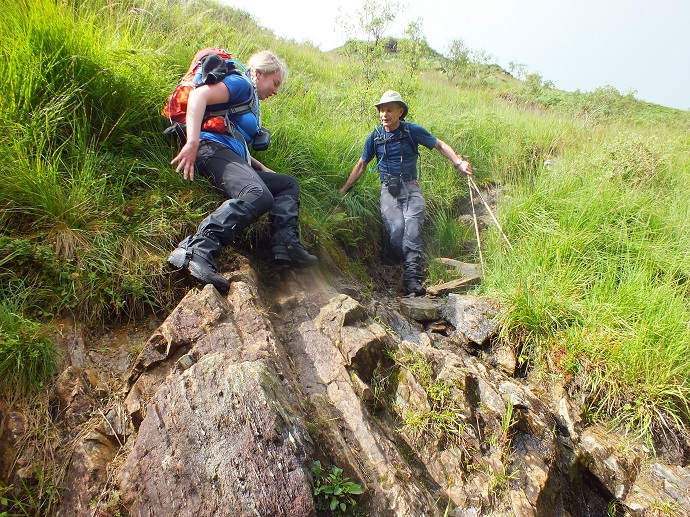 Nearing the summit in the clag

The path was easy to follow all the way to the summit, even I couldn't lose it

However the majority of the path was like a small burn Shortly after leaving the summit we met up with the 3 chaps we had seen following in our footsteps, so we stopped for quite a lengthy chat. One thing we discussed was the descent route, they were planning to return the same way, which have been even less fun than the ascent. We advised them of our plans & showed them on the map & a print out of the WH descent. A few photo's taken on the way down. Looking down onto the abandoned semi-derelict house 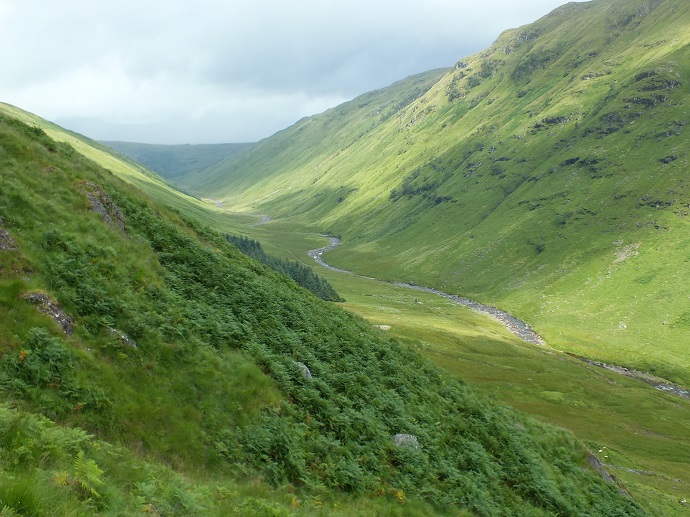 The River Fyne meandering towards Loch Fyne down the glen A few obstacles on the way back to the car She wasn't for moving, we had to pass her by on the grass

The walk back along the road was a bit of a chore, not only were there a couple of hefty showers, we were passed by the 3 guys we met earlier, they had cycled in & passed us in dribs and drabs

Our feet were becoming a bit tender and the walk along the road seemed to take an awful lot longer than the walk in. Not long after passing the Loch Fyne brewery we were passed by the 3 guys again, they even had time for a pint before we reached the car

The moral of that is anyone thinking of tackling this walk, try & take a bike

The bracken does seem worse this year than normal. Definitely one for the bike but, looking on the bright side, you saw more than me

and it looked an enjoyable trip for all - cheers

Your day is all so familiar to when i did this walk. Wet muddy path, overgrown bracken, wet legs, no views for me and then the herd of Highland coos.

I did however use my bike

Excellent report Martin as usual with some quality pictures, looks like you guys had a great day

still to do this one Martin ..will defo try and take my bike! I saw your post and would have loved to have joined you guys but unfortunately was working

I've been looking forward to this report Martin. An accurate description of our day. Actually, I did enjoy the ascent, despite the bracken and wet ground. It was really nice to meet Cat, and I look forward to walking with either or both of you again.

Took me three attempts to bag this one. It just seemed to get inside my head. Sadly I had the same summit views as you did too

It's a Fyne brewery though, and well worth a pint (or two

Nice one Martin, this is on next years to do list

Apologies to Cat & Simon, just realised I forgot to include a map

Will start doing my 100 lines

Nice day there FF , and captured well in the images. Know what you mean about the bracken..I get worried that the ticks are waiting underneath to pounce onto another host!!

scottishkennyg wrote:Nice day there FF , and captured well in the images. Know what you mean about the bracken..I get worried that the ticks are waiting underneath to pounce onto another host!!

If it makes you feel any better I've had 8 ticks this year and, despite my numerous misadventures with bracken, none of them were caught in bracken!

I'm going to start reading more about the vegetation before I come on walks with you Martin! This is the second welcome to the jungle I've had this summer!

Enjoyed the day very much!

Martin, when I get home I'll post a photo of you both in the bracken, and I recorded the route on GPS, so I'll post a map too.

Cat, talking about two ventures into the jungle, I enjoyed Wednesday's so much, I did Ben Cruachan and Stob Diamh the next day.

simon-b wrote:Martin, when I get home I'll post a photo of you both in the bracken, and I recorded the route on GPS, so I'll post a map too..

Thanks Simon that will then back up the title for the walk, especially as my photo's of the bracken didn't really do it justice

Only photos I have that are a bit different. 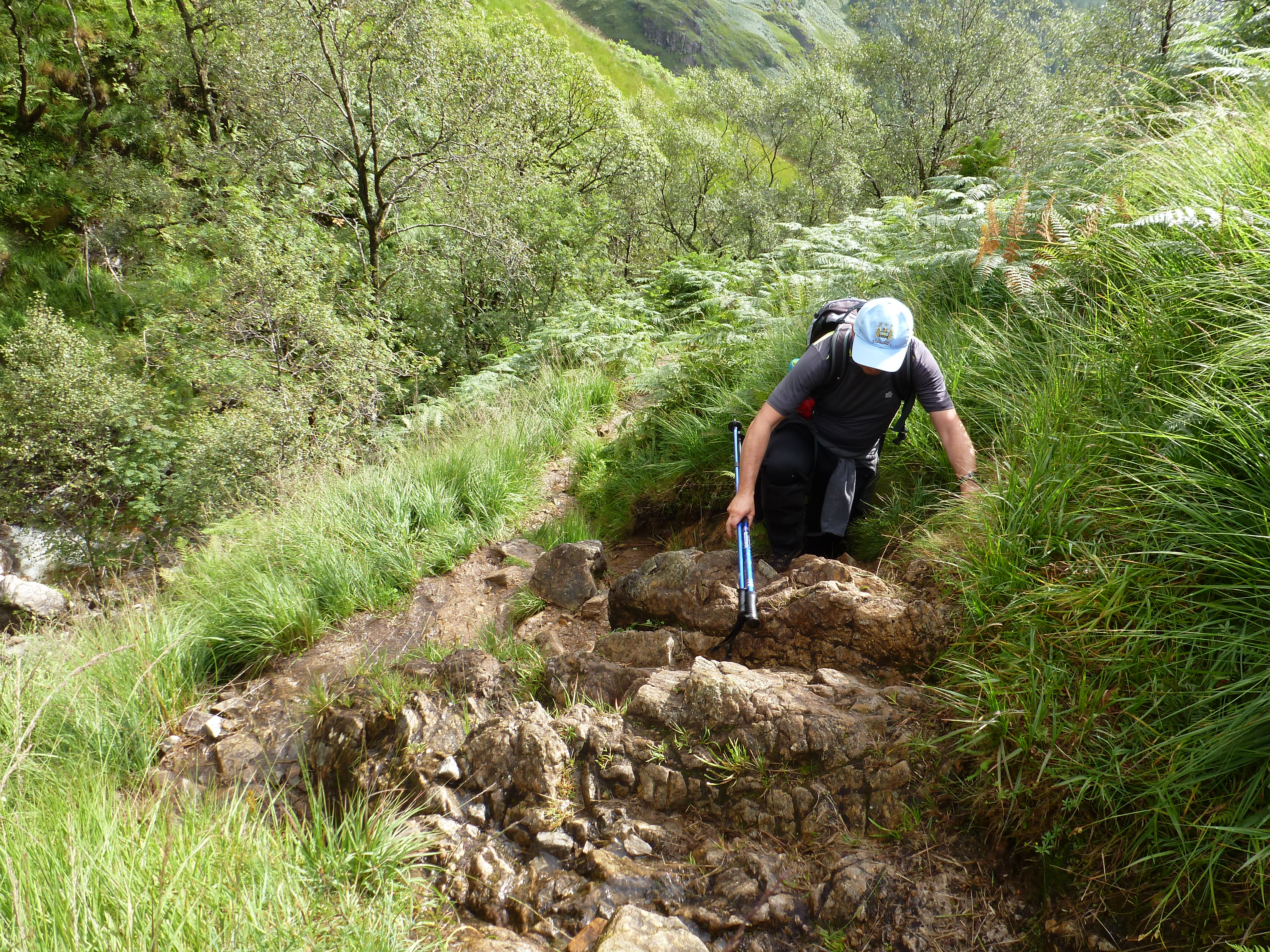 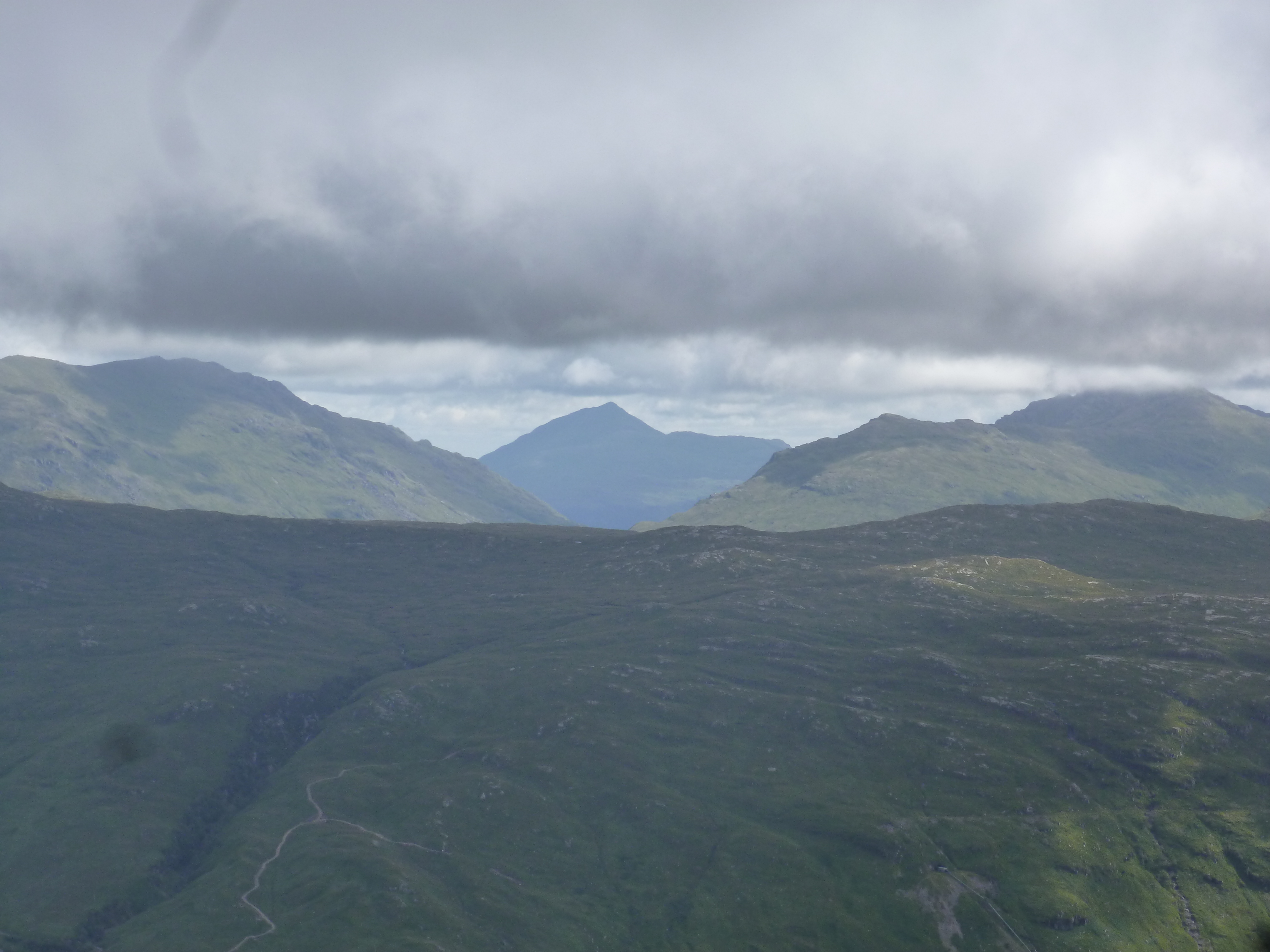 scottishkennyg wrote:Nice day there FF , and captured well in the images. Know what you mean about the bracken..I get worried that the ticks are waiting underneath to pounce onto another host!!

If it makes you feel any better I've had 8 ticks this year and, despite my numerous misadventures with bracken, none of them were caught in bracken!

I'm going to start reading more about the vegetation before I come on walks with you Martin! This is the second welcome to the jungle I've had this summer!

Enjoyed the day very much!

8 ticks this year, and I was moaning because I got my first ever