Munros included on this walk: Beinn Fhada, The Saddle


The trip had been planned since June and I was originally coming alone, but to my surprise my eldest James said he’d join me. So it was we travelled to Ratagan on Thursday to stay in the SYHA. We shared the drive and prayed for the weather and saw the Buachaille and the Ben in great shape. I’d taken James up Helvellyn via Swirral Edge when he was five on a weekend in the Lakes and apart from a trip up Whernside about six years ago, this would be the first time we’d spent any serious time together since then.
Arriving at Ratagan we booked in, admired the view, and went off for a pint and a meal and on returning to the hostel had another couple of beers (a mistake on my part) and eventually turned in.

DAY ONE
The Saddle via the Forcan ridge was Friday’s plan with the Five Sisters ridge for the Saturday, but all were weather dependent. So off to the car park by the Malagan bridge, kitted up and off we went up the stalker’s path to the bealach between Biod an Fhithich and Meallan Odhar. The weather was iffy with sun at first followed by showers at infrequent intervals, but the cloud stayed high and most of the tops clear. James was clearly enjoying himself and didn’t seem to find the climb at all bad, I on the other hand felt quite odd and was finding the going really quite hard. I was wearing a different rucksack and carrying far too much stuff, possibly parental anxiety (I really needn’t have worried), but my progress was not good! We reached the bottom of the ridge and attempted the first real pitch, James was up it well, but I could not make it and was feeling quite dizzy when I looked up. I really did feel rough. It was then after a short discussion we opted for the back door route. I realised I had committed the cardinal sin of allowing myself to become dehydrated and not had enough food, it was like someone had pulled my batteries out and I was slowing to a halt. (Remember the Beer!). The journey continued after we had swapped rucksacks (mine was twice as heavy as James’s) and we disturbed several ptarmigan I was becoming increasingly concerned that I wasn’t going to get to the top so suggested to James he went for it himself once we had reached a good point where he could see the path and ridge. So he did this whilst I slumped against a large boulder and stuffed myself with food and drink in an effort to get some energy back. James was off like a shot and soon far ahead and away up the final steep bit and out of sight. I watched and waved until he disappeared, then the anxiety set in, followed by a case of the ‘galloping but what ifs’. I set off after him and after what seemed an age he appeared at the ridge and came down towards me with a grin from ear to ear and totally exhilarated (his first Munro!) We retraced our steps, hit another rain shower and made our way back to the car. 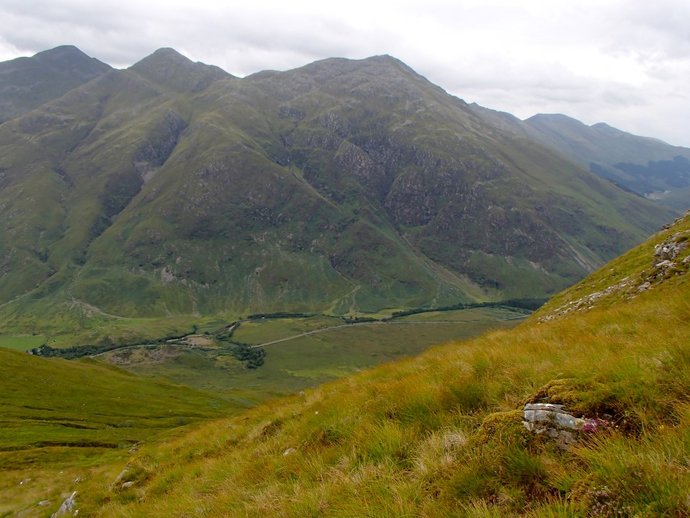 I was really annoyed at not making either the ridge or summit and with myself for being so stupid, but having reflected on it, it was probably the right decision for both of us.
That evening we tried without success to get a lift to the start of the Five Sisters, so had to abandon that plan, any way MWIS was saying weather bad for Saturday. Eventually Plan B appeared in the shape of Beinn Fhada, as I was not happy about leaving the car anywhere overnight or having to worry about getting back to Ratagan after a long walk.
DAY TWO
A good night’s sleep and an earlier start found us at Morvich parking opposite the Outdoor Centre and quickly out on to the path towards Glen Choinneachain. What a path! Just the start through woods and carpets of wild flowers and an ascent designed for the aged! 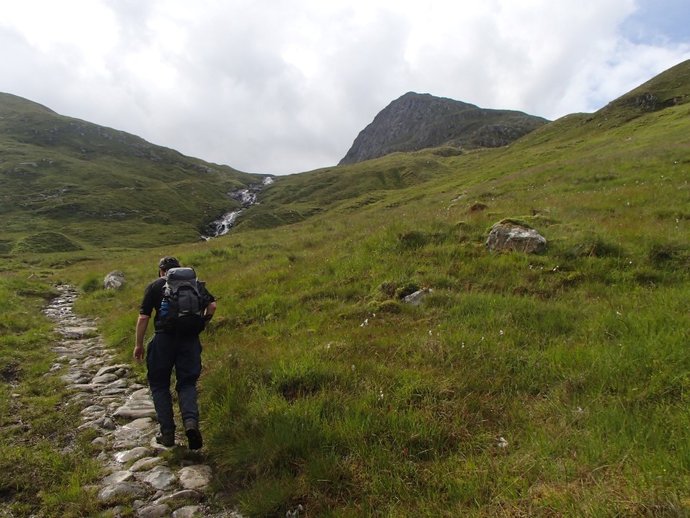 As the path unwound upwards so did the view, I felt great and James occupied himself snapping away. We stopped at the waterfalls at the mouth of Coire na Sgairne for a break, sustenance and a quick check of the map. A couple we spotted ahead of us showed the path zig-zagging ever upwards and they were soon out of sight as we stopped to deer spot. We’d seen the odd deer hoof mark and now at last could see them. Rather pleasing as James seemed to doubt my tales of deer spotting and that they’d be high up for the summer months. This wonderful stalkers path eventually tops out on the ridge and then points you in the direction of the summit. In clag it would be a good bearing test, but today the views were clear and the summit came into view. 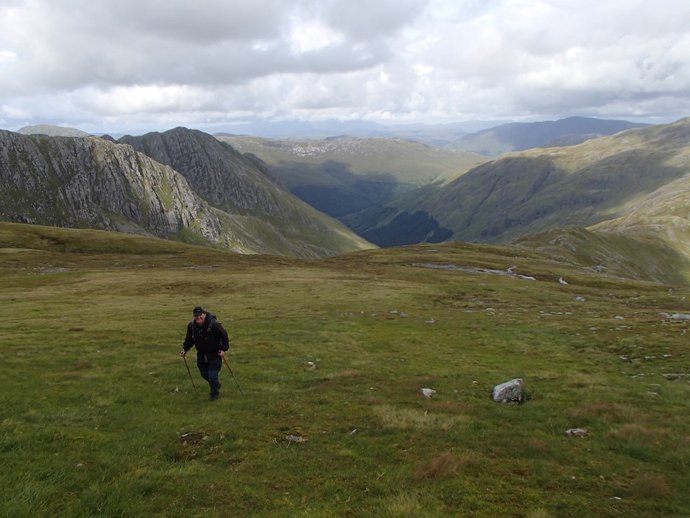 The summit gave 360 degree views and a chilly wind from the west, so we lunched the other side of the cairn and shelter and agreed we’d been lucky with the weather. Suitably refreshed we set off across Plaide Mhor which looked like every Yorkshire moor I’d been on, except the views to the Five Sisters were stunning. 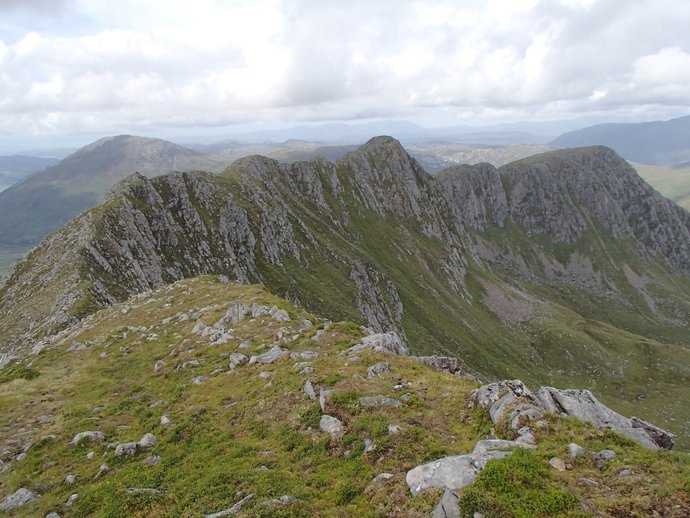 On reaching the top of Meall an Fhuarain Mhor, the ridge began to unwind in front of us. This proved to be a delightful full body workout as we walked, clambered and slid down a series of ribs towards Ceum na h-Aon-chaise, Sgurr a’ Choire Ghairbh and eventually Faradh Nighean Fhearchair. My sticks were consigned to the rucksack and I followed James. Even the ‘bad bit’ fell before our efforts although Dad twitched a couple of times before dragging himself up it. The steep up bit The route exhilarated both of us and time seemed to stand still, we were having fun! Eventually we got to the top of Faradh Nighean Fhearchair and could see the way down; we could almost see the car

After a bit of wandering about in a downward direction (there didn’t seem to be a path), we got ourselves on top of Beinn Bhuidhe. We did a map and direction check just in case and set off down the line of least resistance, which after much complaining about knees, no path etc., etc., made it to the path along the glen again and to the car at Inchnacro.
It had taken us about eight hours in total, but worth every minute. My time with James, his enthusiasm for the hill and a feeling of ecstatic knackeredness made every step a triumph and when rounded off with a pint of Skye Red at the Kintail Lodge Hotel, well here were two happy lads!

Sunday dawned, cloudless and calm as we packed up and hit the road for England, James took more photos and as we made Fort William for breakfast and present buying, the heavens opened and Scotland reverted to the Augusts of my childhood. Dreich!!

Some crackin' pics there! Well done on a fine walk and a super report

Not sure there ARE any ptarmigan in that 'spot the ptarmigan' phoo though......

Keep looking there is at least one! Thanks for the comment, two great walks

That was great! Yep, the ptarmigan are well camouflaged - is there just the one? Even though you didn't quite do the Saddle, it sounds like your couple of days on the hills were a great experience - and that's what counts.