?
A major confusion seems to have arisen with the naming of one of these East Drumochter Munros. "A'Bhuidheanach" is Gaelic for "the yellow thing" - fair enough. However, it seems to have caused general puzzlement that there are no less than three hills up on this flat and featureless plateau that have all been named "the yellow thing": a minor top just named "A'Bhuidheanach", another minor top named "A'Bhuidheanach Mhor" ("the big yellow thing"), and then the third and HIGHEST, the actual Munro summit called "A'Bhuidheanach Bheag" - "the WEE yellow thing". However, puzzlement only arises if "Bheag" is taken to be the Gaelic word for "small"... Having now experienced said Wee Yellow Thing, it is clear to me that the fundamental error here is that "Bheag" isn't Gaelic at all - it's clearly intended to be the more familiar English word "Vague".
Well, we probably only had ourselves to blame. I only had one weekend day free in August for a walk, and the forecast was totally pants

. All the same, Tom had also had very few opportunities to get out for a walk this month, and both of us were keen to get something ticked off if possible. These two East Drumochter Munros looked easy enough, and given that by all accounts these two poor creatures are unlikely to ever feature on too many "Munros" calendars, we thought that at least we wouldn't be missing too much if we got nae views

.
We got an early start, and Tom's car was the only one in Lay-by 87 off the A9, which is the usual starting point for this pair. The quarry track that leads up to the East Drumochter plateau was just across the road. 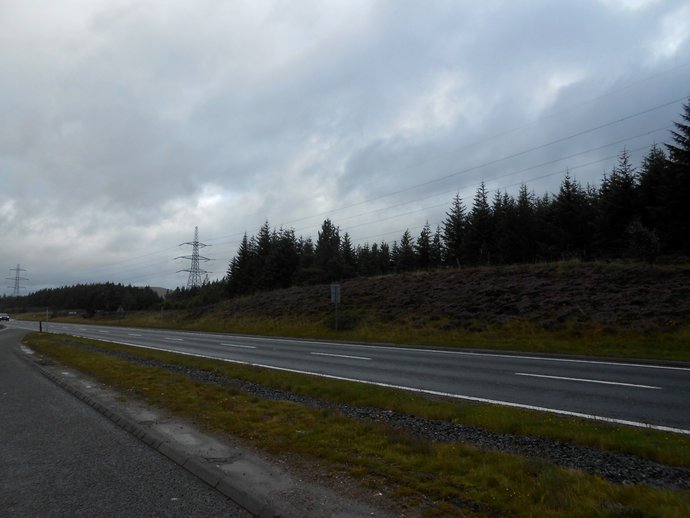 At least this excellent track continues right the way up, and its zigzagging route up made for pretty easy height gain. 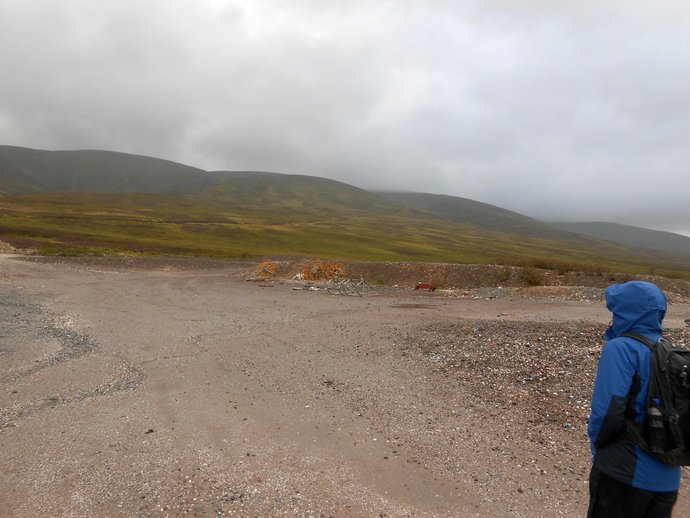 About halfway up, the rain eased off for five minutes or so, and we got reasonable views over to the other side of the Drumochter Pass. The West Drumochter Munros, which are altogether more distinguished hills, were looking rather fine: To the north, there was a nice view down over Dalwhinnie - a bonny spot, but chilly in the winter, I'd bet 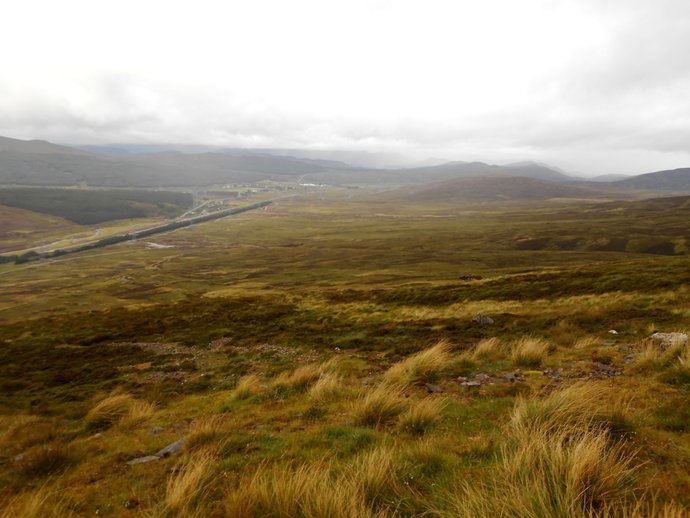 Eventually we came to the disused quarry, and shortly afterwards to the point where the track diverges at a cairn to send branches north and south towards each Munro. 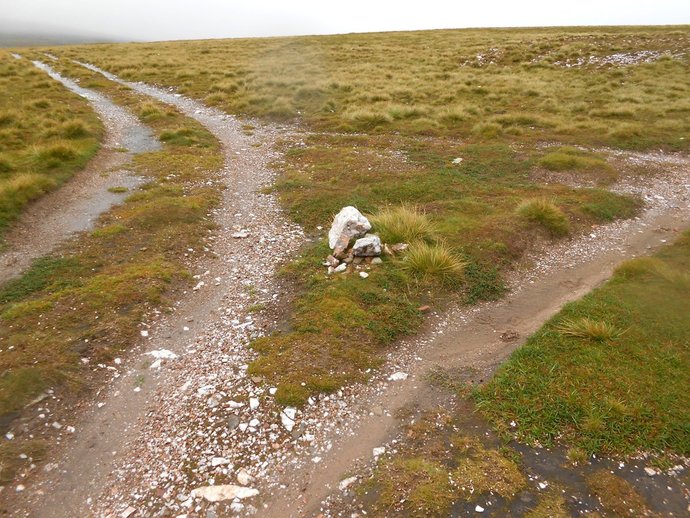 We reckoned that the southern of the two Munros, aforesaid A'Bhuidheanach Vague, was going to be the bigger navigational challenge on a day like today, so we decided to tackle it first and took the southward track. It was easy enough at first, and there were even some breaks in the cloud giving us hazy views over to the east. 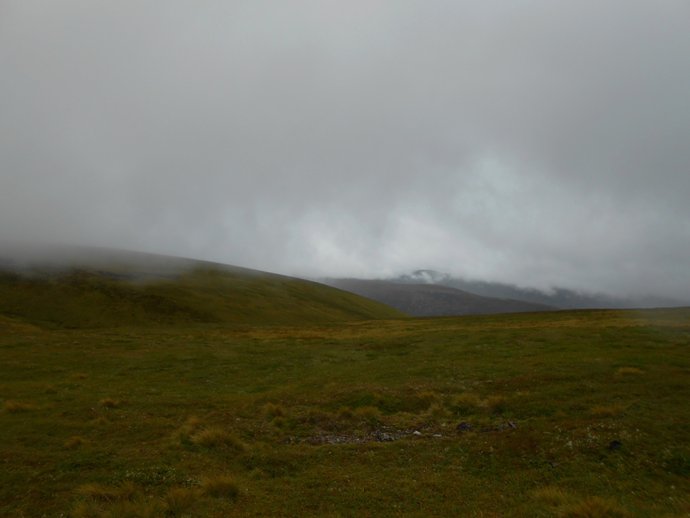 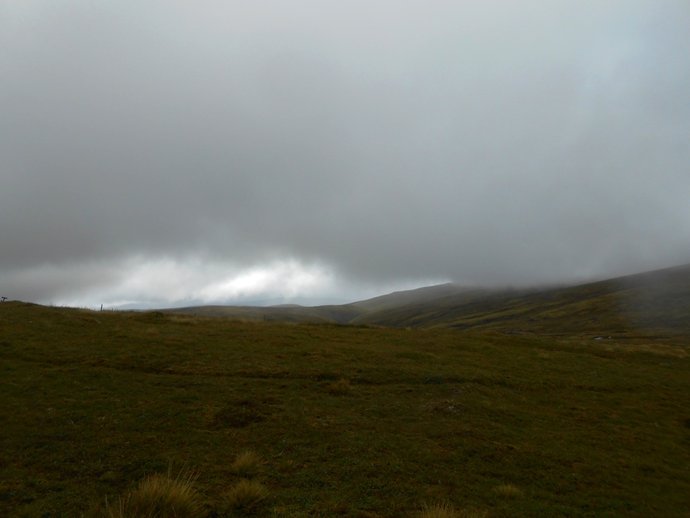 A wee bit further on, we came to the cairned minor top of A'Bhuidheanach, which is actually much pointier than its parent Munro. Well, it's all relative 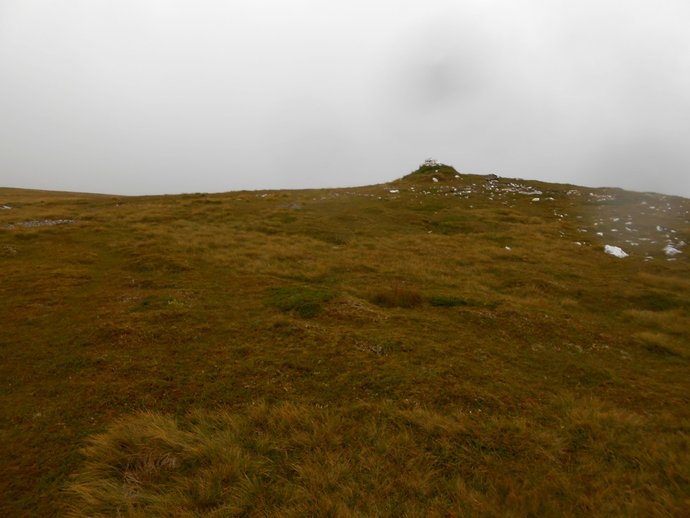 Some helpful stone arrows just to the left of the cairn kindly served as indicators to the start of a side path that avoids what would otherwise be a tricky wee steep bit en route to Vague. Well, either that, or someone was just having a laugh and pointing the way to a particularly vicious bit of bog Fortunately, it wasn't necessary to tackle the boggy bit directly: the path bypassed it to find a cunning way across onto the northern slopes of A'Bhuidheanach Mhor, where it petered out. 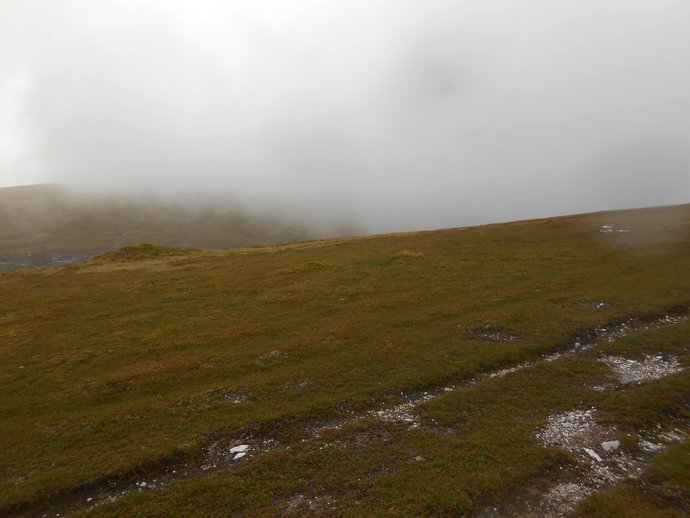 By this stage, we thought that all we had to do was just keep heading uphill and we'd get to the summit. However, as the steady drizzle matured to heavier rain and then to driving sleet, we managed to completely bypass the true summit with the trig point, to end up at the high point to its west at GR655775, which is also given a spot height of 936 metres on the OS map. Given that there is a degree of controversy over which is the true summit, this was all completely deliberate on our part of course ... not

! A quick check of the GPS showed us our mistake, and we headed over eastwards to the "official" summit trig point. This has to be the most bizarre Munro summit I've been at yet - just a completely random trig point plonked in the middle of a boggy moor - but I suppose you just have to trust the Ordinance Survey to have worked out which bit of this featureless plateau is a few millimetres higher than all the rest... All the same, there was something of a sense of achievement in having found the thing in such dreadful weather. Our rather pained smiles probably say it all... 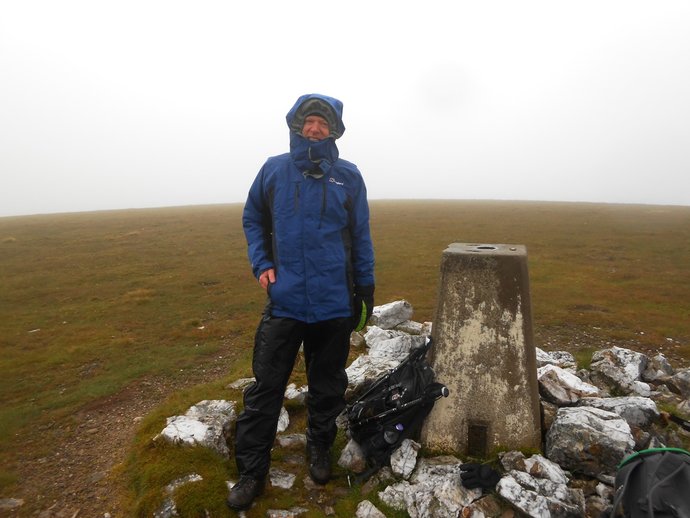 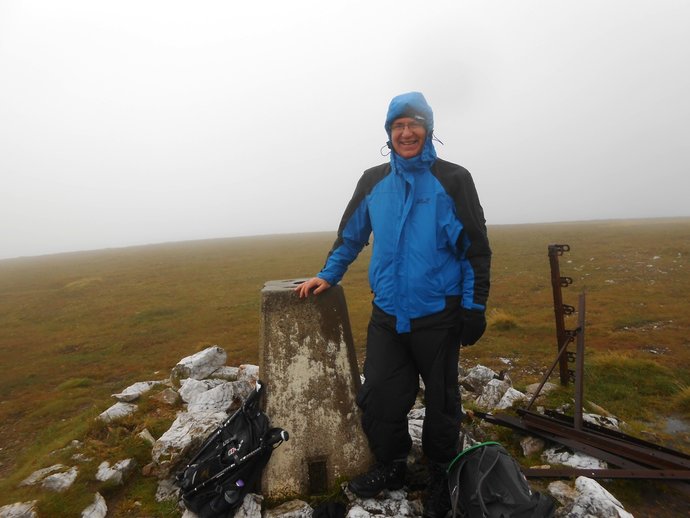 Determined not to repeat our navigational indiscretion, we now set off on a direct bearing towards the summit of A'Bhuidheanach to pick up the track again ... even if that bearing happened to take us right through the middle of the boggy bit we'd seen on the way over! 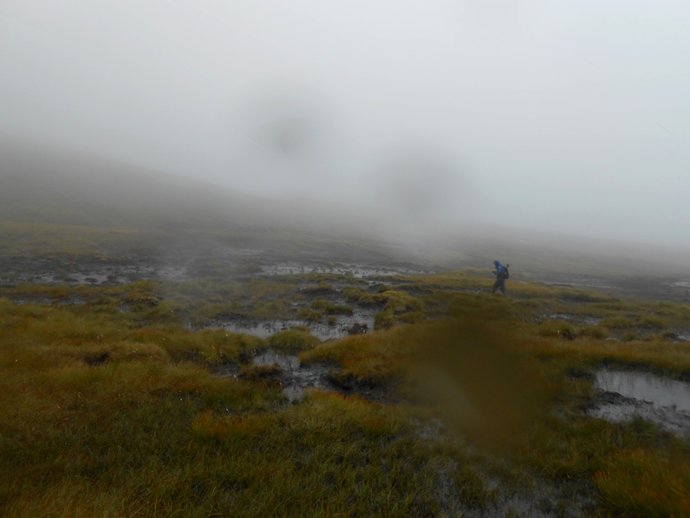 As we got back near the track bifurcation about the old quarry, the clouds parted again and we got a view back to the majestic A'Bhuidheanach Vague (or one of the various Bhuidheanachs, anyway

), soaring like an eagle above the East Drumochter plateau... It was a straightforward enough plod along the track towards the second Munro, Carn na Caim, which at first looked fairly promising, almost with some tentative aspirations towards very slight pointiness. 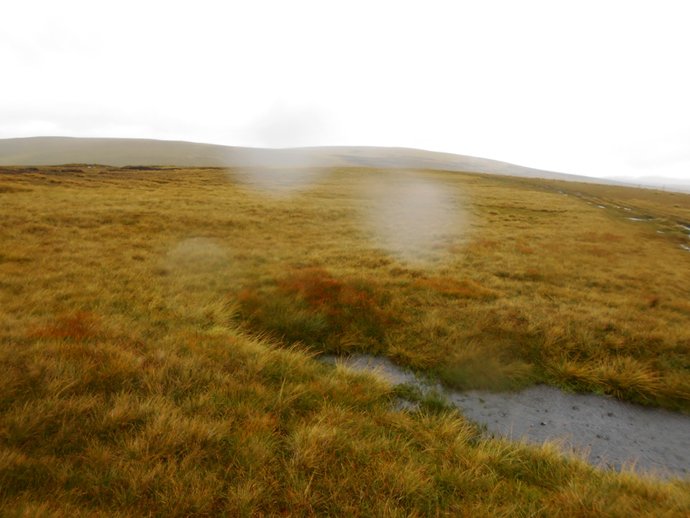 Higher up, though, it degenerated into yet more completely featureless plateau. At least we saw some wildlife for distraction - large numbers of grouse, mountain hares, and even a ptarmigan... the ptarmigan was supposed to feature in this photo, believe it or not, although you'd be hard pressed to spot it through the sleet! In theory it should have been possible to pick up a line of old fenceposts that would guide us to the summit cairn, but in practice we somehow managed to miss these in yet more driving sleet (it's supposed to be AUGUST - has no-one told them

?), and yet again we had to get the GPS and compass out to locate the true summit. More pained smiles! 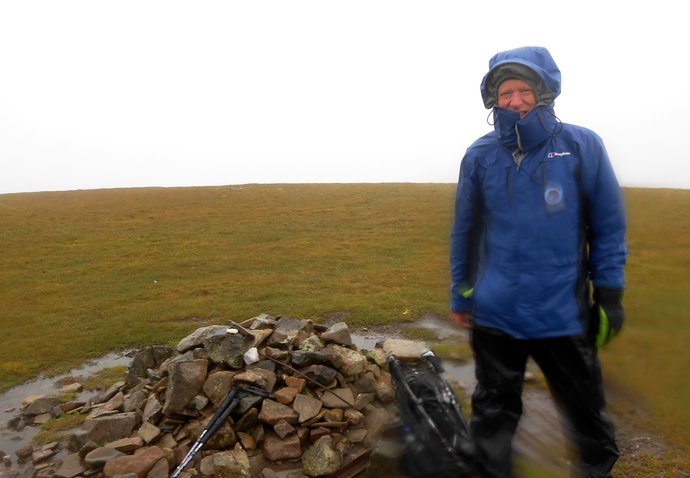 By now, it was lunchtime, but the weather had turned so bad, it was just funny We ate our sandwiches standing up, with our backs to the wind, and then just hot-footed it back down to the car.
I've probably been a little harsh on these two hills. Actually, considering the weather, this was a far more enjoyable outing than I'd have given it credit for. Tackled on a good day, this pair would have been a tad unexciting, but in weather like this, it did feel like a wee bit of an adventure. Useful navigation practice too!

Ha ha - beag means vague in BHK language! Love it. It all looks a bit vague to me over in Drumochter. I think the weather was the same all over this weekend - did you have the gales too? Great read that.

AnnieMacD wrote:Ha ha - beag means vague in BHK language! Love it. It all looks a bit vague to me over in Drumochter. I think the weather was the same all over this weekend - did you have the gales too? Great read that.

Cheers! Oh yes, it was blowing a gale too ... did I forget to mention that

seems to rain more often than it's dry near Dalwhinnie unfortunately - looked a bit dreich up there, kenny -
but on the bright side, your weather was better than mine on these hills

A soggy report there guys, well done for braving the elements. many of the hills round these parts would see a tad 'uninteresting' but they are good safe ones for winter.

I'd count this as a good day for Drumochter, you got some views.

How many times have i driven through this area and saw nothing but rain and clag? Just about every journey i think

Aye did these in similar conditions