After a lot of humming and hawing (seem to be getting good at that,) I plumped for Beinn Chabhair, due to forecast, distance away and not been to these hills before. Oh, forgot to mention, long time since I was last in Drover’s Inn!
Anyway, things looked reasonably encouraging, as I got my gear on, looked for possible path up the Beinglas falls, made my way along the A82, to the wooden bridge spanning the river Falloch, then around the field. 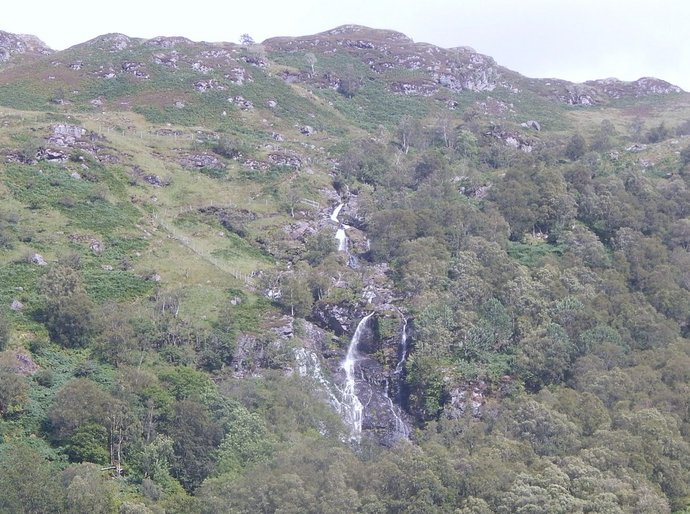 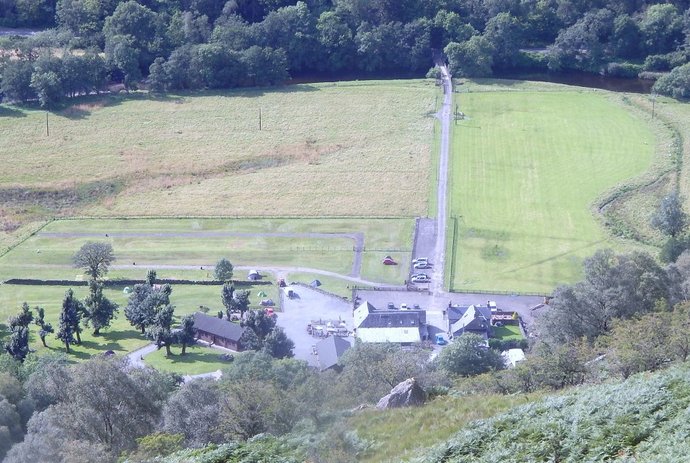 Didn’t like my first mistake, which was to turn right, over the footbridge and go up the south side of the falls, through some thick bracken. Then again, when I came down the correct way, I thought it may not have been much worse.
Once up top, I didn’t like having to find a crossing point over the burn, which was raging like a mad bull! After trudging through some hard going, along the bank, found what looked like a reasonably makeable jump. Threw my walking pole over to the other side, looked at the deep pool below, hummed and hawed again,thought mcuk that and headed off further upstream, possibly saving my life in the procss.
At last found a spot, crossed over, made my way back 50 yards, rescued my walking pole and finally hooked up with the path, proper. Did not like trying to decide which of the two rugged ridges ahead was my hill. Can see how others end up Parlan hill. 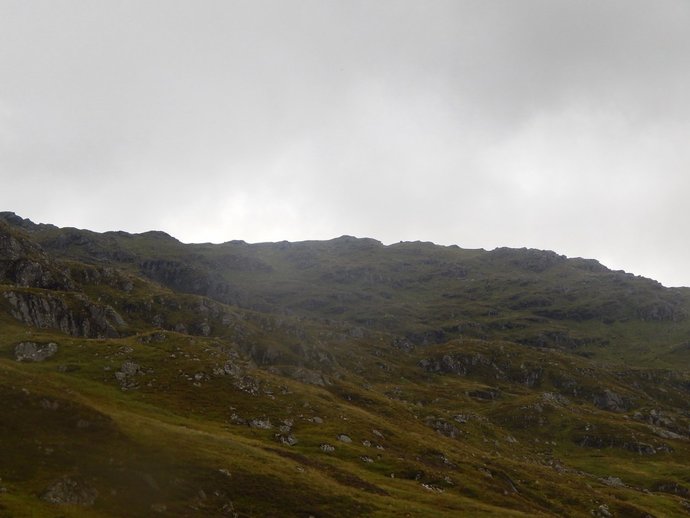 Didn’t like long splash over the next 20 miles, ok maybe only, 2 miles of swamp, up to Lochan Beinn Chabhair. Didn’t like jumping over the really wet bits, or dragging boots out those bogs that didn’t look so obviously boggy. Didn’t like the many hops, skips and jumps from one bit of ‘path’ to another in search of the best path, only to find the same problems. The 'clear path,' was now feint and the feint bits, submerged! It's a bit like swapping queue's in the supermarket, or crossing lanes on the motorway. You never win!
Did like those good bits of path near the Ben Glas burn, where one could hear the torrent flow. Didn’t like the fact they were few, far between and only lasted a few yards, before coming to an end. Eventually reached a spot where I realised I was heading more to the hill on the left. Better check GPS, as cloud was low. Yes, liked the fact I was on right track. Should come to lochan soon. 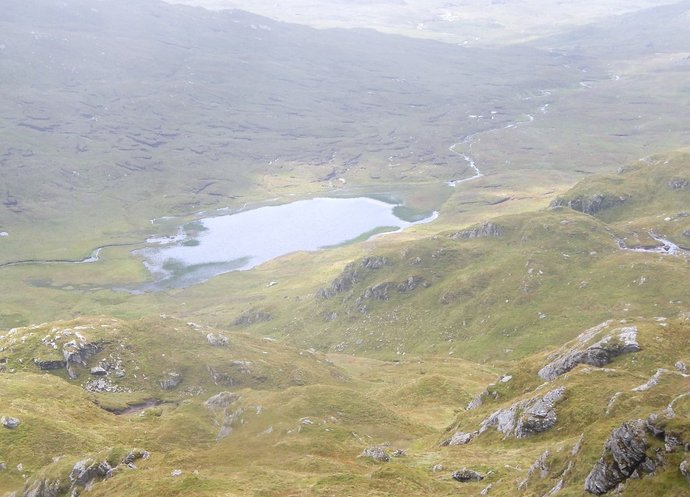 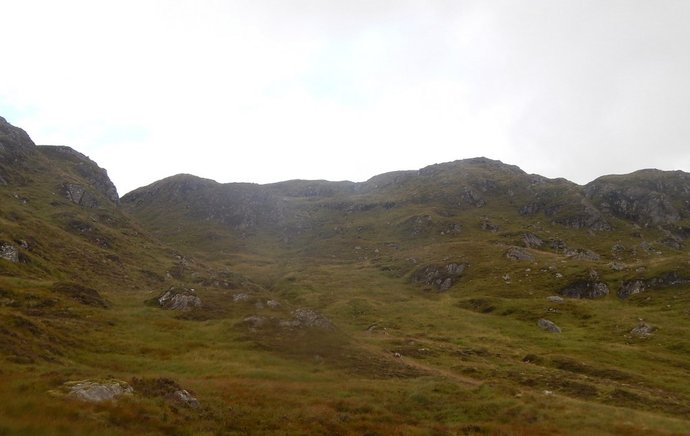 Path up Meall nan Tarmachan is more discernible than in photo, but not much.

Liked being able to spot track up Meall nan Tarmachan, but didn’t like look of height which lay ahead – looking at map now, this is over 400 metres, but it’s a cruel con trick! My legs were feeling tired by now. I didn’t like this. The path up was a bog, or burn. I didn’t like this. Then began to go up, round, down, round the many rocky knolls and boggy bits. Many false dawns. Didn’t like this. Vis poor, no views. Yes, didn’t like this. Finally made it to the top, knackered and no views, three hours. Liked and didn’t like. Thoughts of maybe doing An Caisteal and Beinn a'Chroin, which were almost invisible, had long since gone from my mind, which I liked. 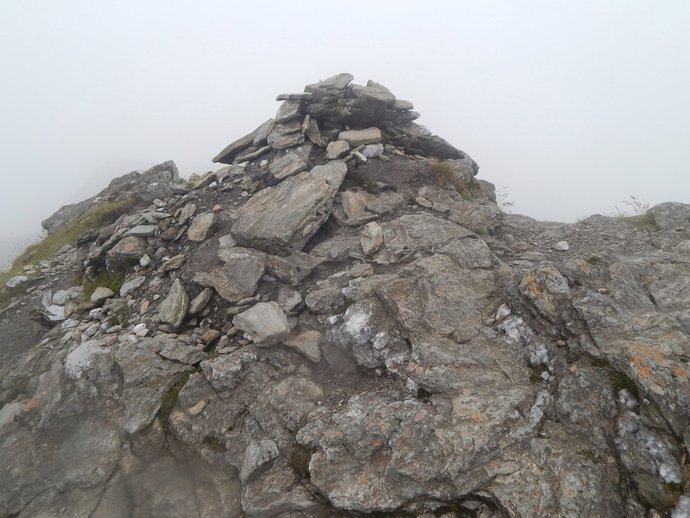 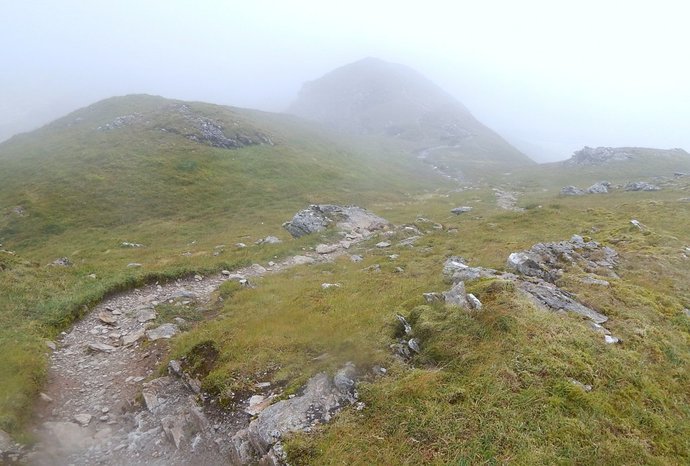 Ridge down from summit. 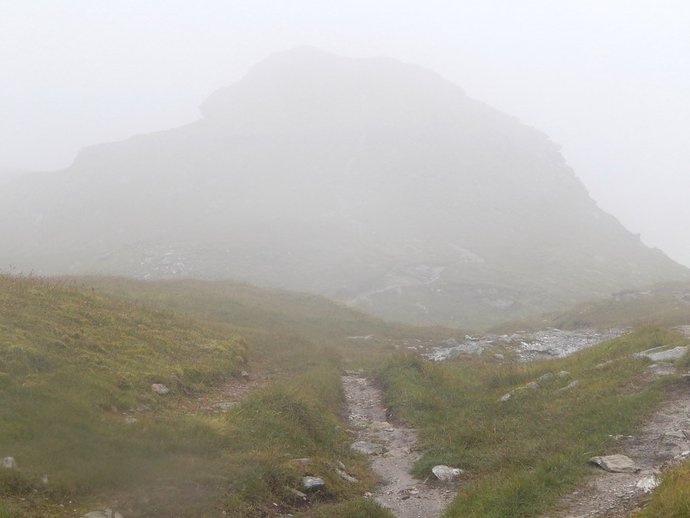 Ridge back to summit. 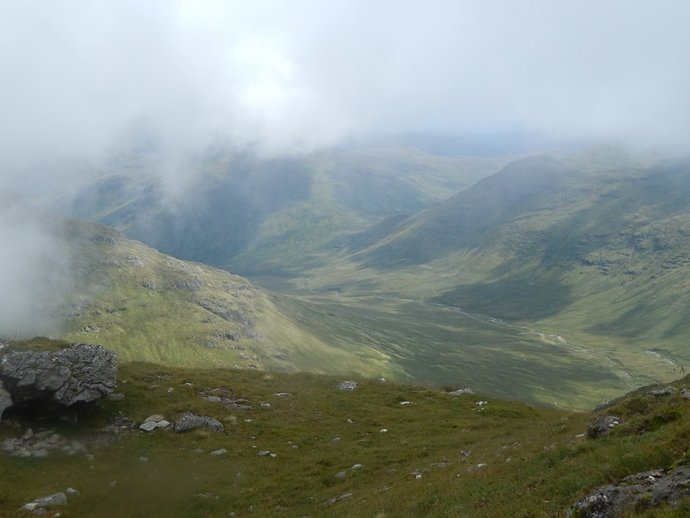 West into Coire a' Chuillinn. Looked a better way up to me?

Turnaround and back same way. Every step down seemed awkward, too big, onto rough edges, slippy, boggy, etc, you know what I mean. Didn’t like it and same splish, splash over bog. Can well understand how folk get lost on this stretch, when clag is down. Didn’t like rain and wind in my face, but liked fact it only lasted half hour, before sun came out, just above falls. 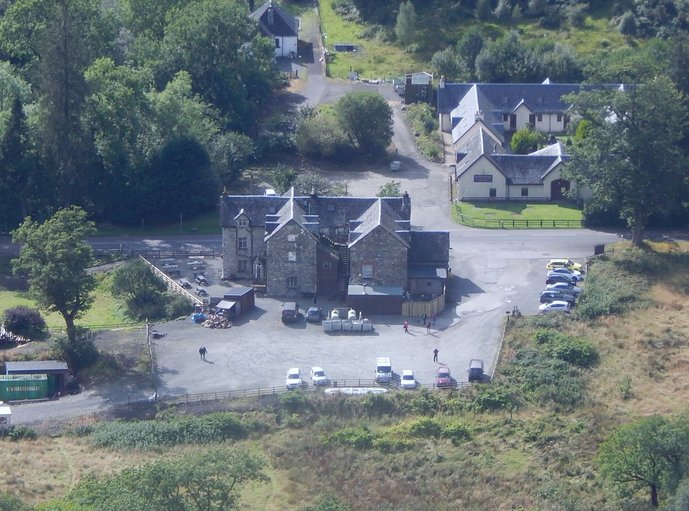 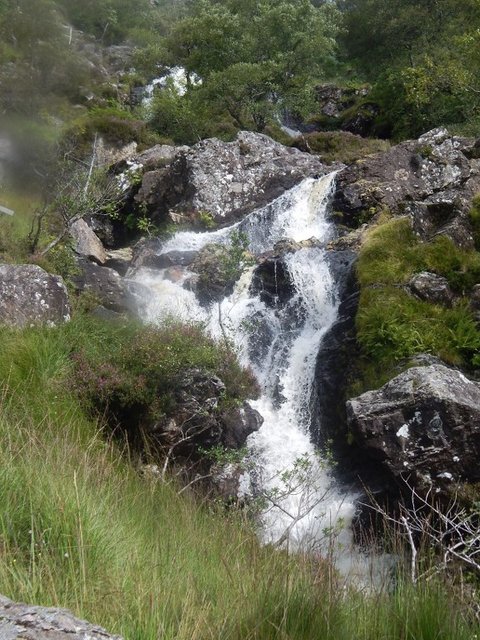 Did like first views down to Drover’s Inn and then close up views of the falls, from the ‘proper’ path, which I was to discover, sits behind the wooden wigwams. Back at car in five hours exact. Didn’t like fact I couldn’t find my wallet in car, nor fact I only had couple of pounds in loose change in my pocket, but boy, Mr Grumpy did like his wee, half pint of cider in the Drover’s Inn.
Now, some of you may think I did not especially enjoy, Beinn Chabhair, but ……….. 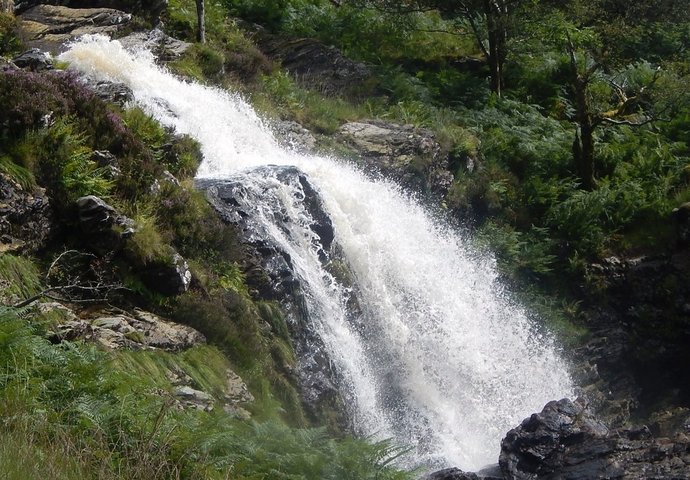 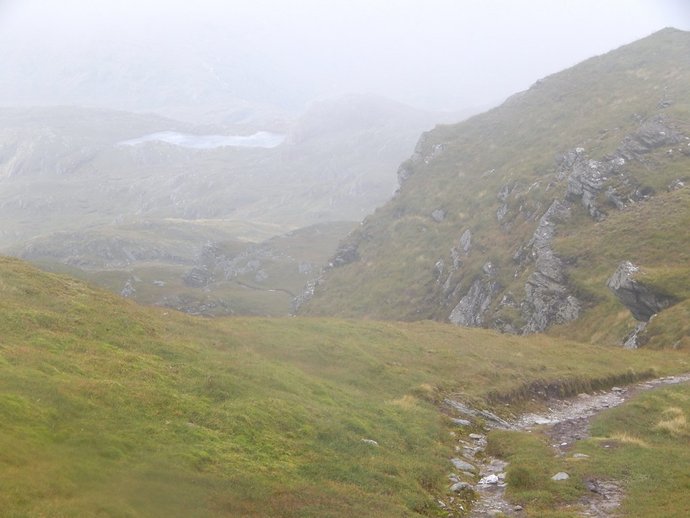 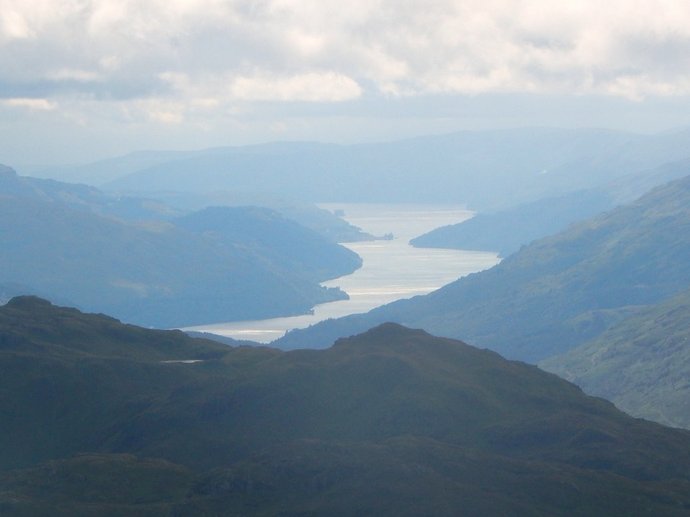 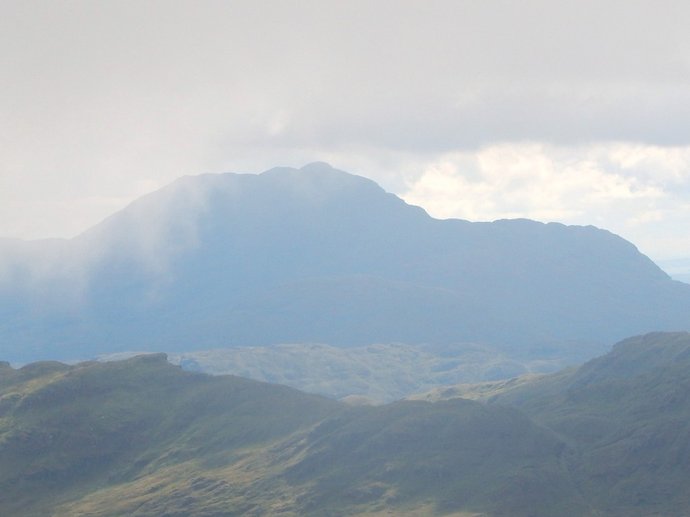 A fine mountain Jim. Some nice pictures and a good story.

I was up there today, but climbed from Derrydarroch, so missed out on the delights of the Drovers.

I was up there today, but climbed from Derrydarroch, so missed out on the delights of the Drovers.

Thanks, Simon. As you can sense, I didn't have the best day and for some reason - think it was the boggy stuff- found myself tired and not over enthusiastic about this one. Was it any drier from Derrydarroch?

Alas, my couple of bits could only buy me a half of cider, but probably just as well I had no more.

I had a hard day out there in blazing heat. The swamp is a perma-feature I think. As is the tiredness before you get on the hill proper.

Nice report. Reminded me of my ascent in continuous rain, howling wind on top resulting in a crawl to the cairn and the long , squelchy plod back the way I came - but at least I didn't miss the path on the way up.

Quite an achievement that.

Etched in my memory as a tick hard won, never to be repeated.

simon-b wrote:
Thanks, Simon. As you can sense, I didn't have the best day and for some reason - think it was the boggy stuff- found myself tired and not over enthusiastic about this one. Was it any drier from Derrydarroch?

There was some wet ground lower down in the glen at first, but not too bad when the proper ascent got underway.

It's a great hill, but I can understand why the telmatalogical (go on, look it up

) environment got you grumpy!!

BTW: where is the Drovers? I was desperate for a half of shandy after I'd done this (on Friday, WR posted), but I didn't know any reasonable places of cultural, architectural and historical interest within striking distance, other than the Village Inn in Arrochar, which is a few miles down the road...