This weekend a large group of us descended on Skye all with different plans for the next couple of days, and with this being my first time I was eager to get up into the majestic Cuillin mountain range. After a long drive all the way from Glasgow we arrived at the bunkhouse in Carbost a short drive from the fine peaks.

On friday night still battling a fierce cold which had been plaguing me for a week I made an early retreat to bed in preperation for the early start, and on waking made the preperations to what I would need for the day. The plan had been decided to take in a route round the Coire a' Ghreadaidh starting from the top Sgurr Thuilm to Sgurr a' Mhadaidh and finally to Sgurr a' Ghreadaidh. Only a small group of us would be heading out today while others tackled the Red Hills and some other routes. The party today consisted of Willie, Alice, John, Colin, Craig and Myself. 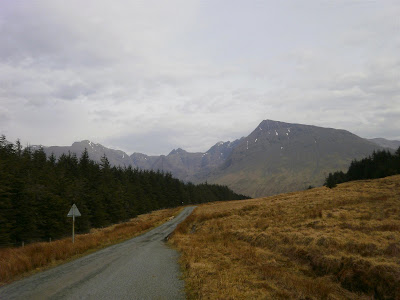 On reaching the parking spot at the Glen Brittle youth hostel, some snow could still be seen on the top so I decided to take my axe, however I left the crampons behind knowing that any snow would be soft and managable.

Following the line of the Allt a' Choire Ghreadaidh past some nice waterfalls carved out of the valley on its meander down we reached the lower portions of the coire and were being greeted by some very strong gusting winds which came out of nowhere and nearly knocked you on the ground. At this point we made the decision that any strong winds would be very unpleasant on a long and exposed ridge so we would instead make our way way to both peaks from the bealach known as An Dorus (The Door). 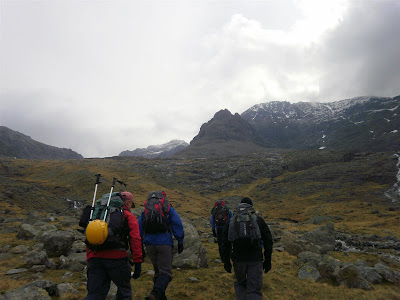 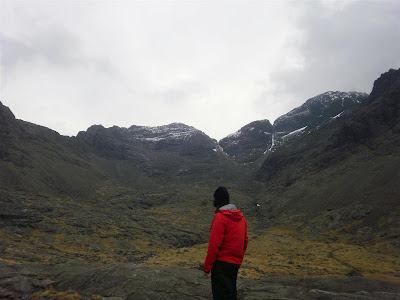 The climb to An Dorus was over and up lots of very loose scree and rock which would hurtle down the slopes to anyone or anything below. This coire was just fantastic and surrounded with magnificant butresses and gullys formed out of ancient volcanos and much different to anything which exists on the main land. 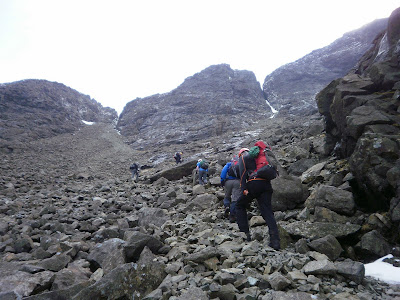 An Dorus itself is the bealach, but not like any other bealach but more a small Arete of rock at the top of a gully, with another steeper gully at the other side. The climb up An Dorus was a little tricky due to snow and lots of melt water streaming off the rocks at other side. 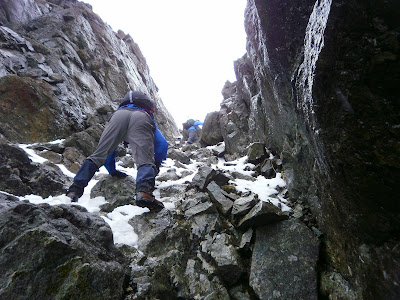 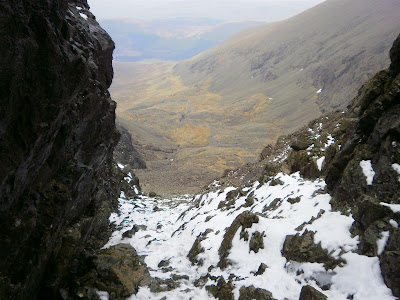 At the top of An Dorus the team climbed up the crux which was a bit difficult with wet rock and snow, and the exposed drop to the other side of the gully. At this point I was feeling pretty weak after the ascent and my cold and could not commit myself to the move in the conditions and it was to much hassle to get the rope up to them and set it up so I told them to go on. Willie also graciously bowed out at this point. After a couple of minutes reflection I decided I needed to push on through my pain and find a way up and at this point another party had veered off to their left rather than come up where we were so I downclimbed An Dorus a little and found a ledge which lead up some easier ground to the summit. I dumped my rucksack here to retrieve on the way back down to give me a energy boost and made my way up to meet the rest of the team on the summit of Sgurr a' Mhadaidh. 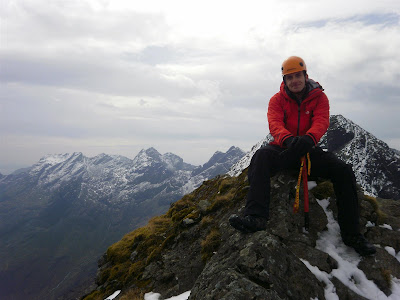 The views all round are fantastic and although it is a pretty cloudy day the clouds are much higher than us. Sgurr a' Ghreadaidh looms higher behind as a reminder of the next peak of the day. 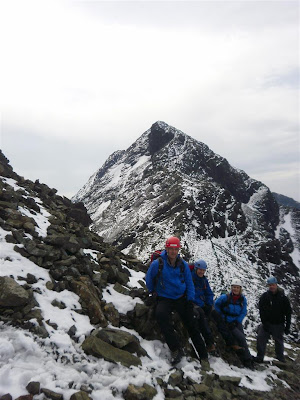 We made our way back down to An Dorus to take a look at the route up to Sgurr a' Ghreadaidh. It is decided to rope up just now rather than be caught on any difficulties unaware. Willie decides to head back down to the bottom of the coire for lunch. 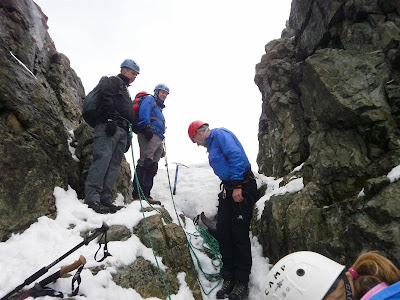 The climb out of An Dorus is reasonably straight forward with enough hold but could be trickier on the way back down when looking to the exposed views down below rather than upwards. 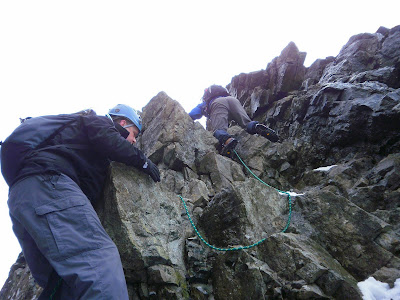 We followed the ridge which up was a mixture of dry and wet rock with patches of soft snow on precarious slippery downwards facing slabs so taking care up the ridge is a certainty. 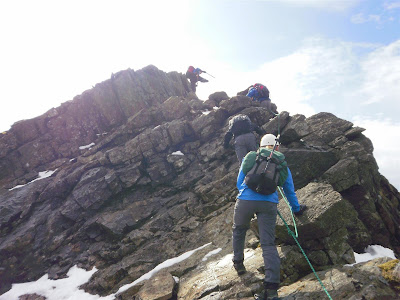 This ridge passes the top of a much steeper and ominous gully known as Eag Dubh (Black Cleft) which is full of snow and looks like it would be an interesting winter climb. It then comes to an end at a butress of rock known as The Wart and the ground becomes easier so we take the rope off and leave it here for the way back down. 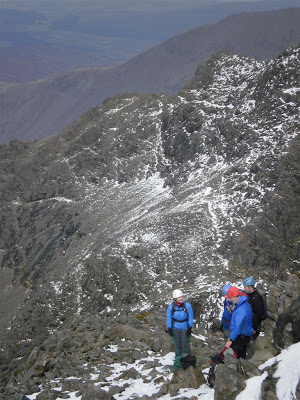 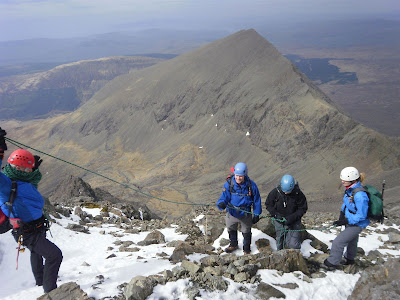 From the edge of The Wart we climb up a nice snow slope kicking in steps as we go which takes us up onto a final ridge leading to the summit. We have reached our second summit of the day of Sgurr a' Ghreadaidh which gives us even greater views than before over the Cuillin, the mainland and other various Hebridean Islands. This is as good a time as any for a spot of lunch. 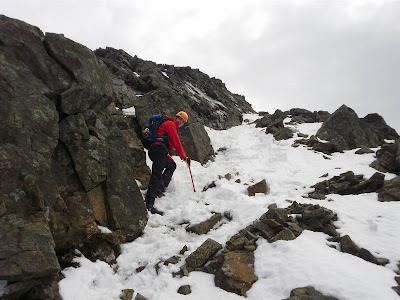 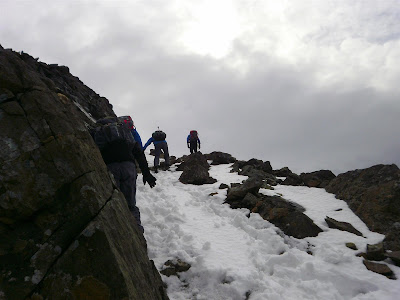 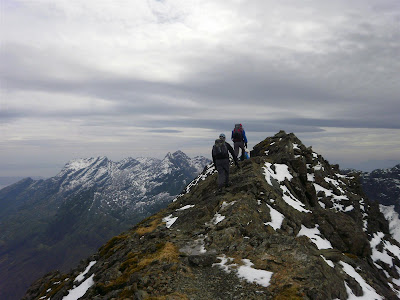 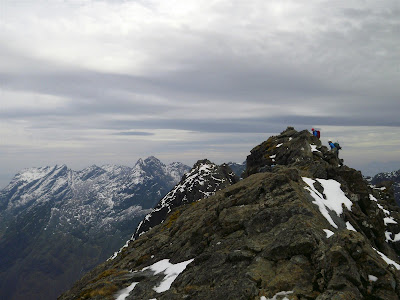 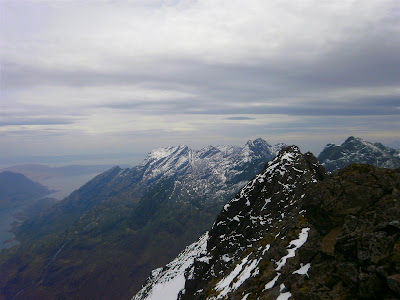 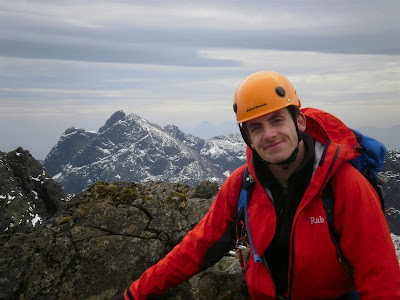 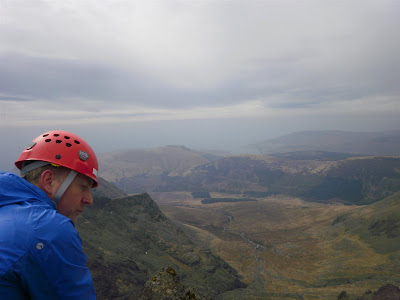 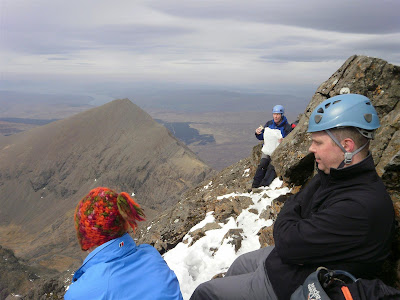 We make our way back down the same way but knowing the ground ahead pack the rope away and climb down freely. A couple of tricky moves later and are at the drop down to An Dorus again and as expected looks a little bit more exposed so we use the rope to get down again. 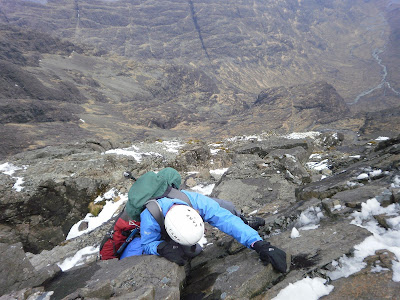 We make our way down to meet Willie again. A brilliant day in the Cuillin with some snow and everyone is happy. Hopefully tomorrow will be as generous. 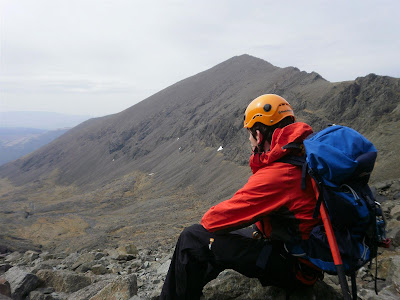 Great report Milesy. I would need my bravery tablets to attempt anything like that whilst there is still snow around

It just looks like a different planet from the mainland

your report goes to show that you never really know what weather to expect in scotland.

good effort for your first day on the cuillin

And I'd need 'bravery tablets' (wish someone would invent some) just to do it at all, in dry, settled, calm weather!

But superb and detailed photos - thanks

Nice report Milesy, managed to get those two in last summer.

Legs were wobbly that day and there was no snow, so well done.

I had to sit at the bottom of an dorus for an hour and wait for the cloud to clear before making any decision's about going up but luckly it did and was worth the wait, great couple of hill's...