For the third time in four years, I booked a room at Dunlochay B and B in Killin. This time involved driving further west for my targeted mountains than on previous visits.

14 8 9.gpx Open full screen  NB: Walkhighlands is not responsible for the accuracy of gpx files in users posts
At about 5:30 am I set off from Wakefield, and was walking from Inveruglas around 11:00 am. This was a fine day with some excellent views. Climbing Ben Vorlich was my first venture into the Arrochar Alps. 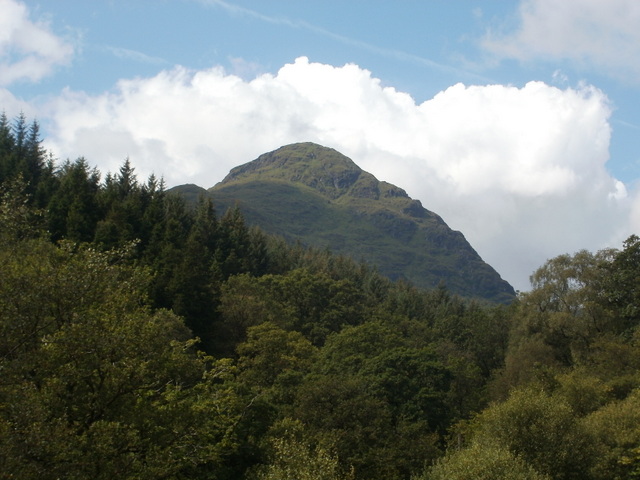 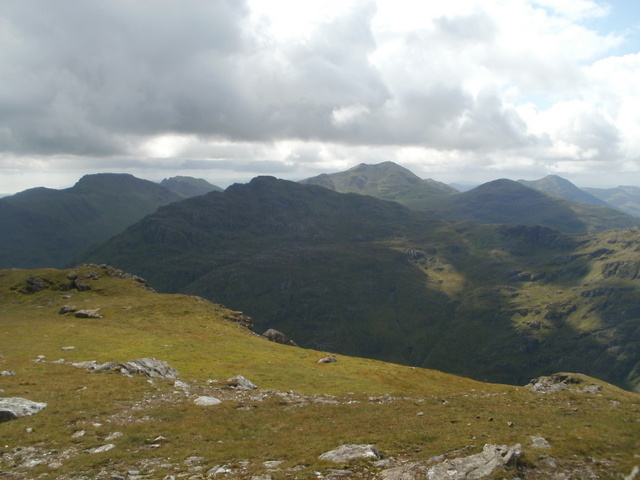 The rest of the Arrochar Alps from the trig point Loch Lomond and the Crianlarich hills from the summit 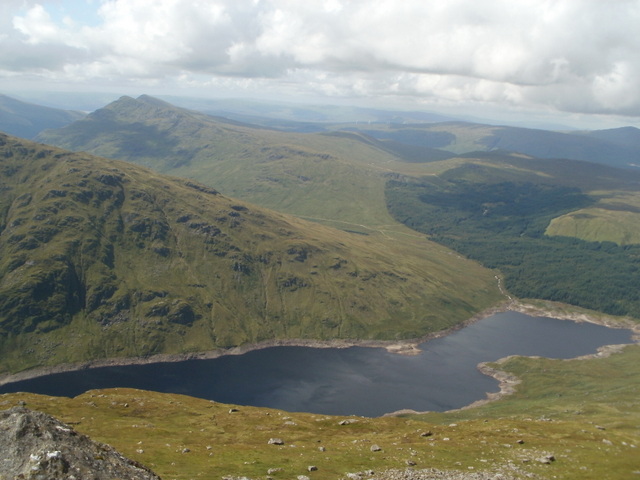 Loch Sloy from the summit

After descending, I drove to Killin and checked in. The next day, the aftermath of Hurricane Bertha arrived in the Highlands, and I stayed in the glens and straths.

2014-08-11_1013 136km.gpx Open full screen  NB: Walkhighlands is not responsible for the accuracy of gpx files in users posts
The weather forecast still wasn't brilliant, but sounded more hopeful further west. So I headed for the easier pair of the Cruachan range. Looking towards the hills from the parking spot was not very encouraging, but I set off anyway. Looking towards the day's targets from the start

I was soon in the clag and the rain was on and off. Conditions on Beinn a' Chochuill weren't too wild, but after leaving Beinn Eunaich the wind was really blowing me about. Eventually I dropped out of the cloud. 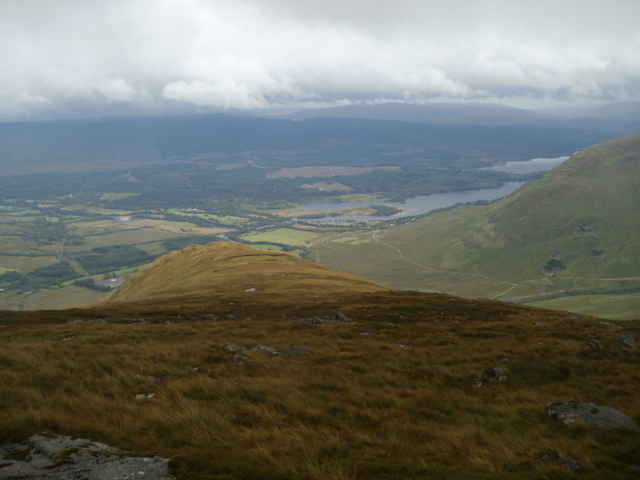 2014-08-12_1118 140km.gpx Open full screen  NB: Walkhighlands is not responsible for the accuracy of gpx files in users posts
Another wet and misty day, but the wind was easing a little. Still not a day for a big walk, so I chose the Bridge of Orchy pair, one of the easier options on the agenda. Ascending into Coire an Dothaidh

I went for Beinn Dorain first, approaching from the bealach on a bypass path to the west, then returning along the ridge.There was not a lot to see on either summit, and there seemed to be a few 'red herring' paths on Beinn an Dothaidh. At last, I emerged from the low mist, and in time saw Bridge of Orchy ahead. Coming down alongside the Allt Coire an Dothaidh

There were one or two wet West Highland wayfarers sitting outside the hotel, as I got into my car and drove back to Killin.

14 8 13.gpx Open full screen  NB: Walkhighlands is not responsible for the accuracy of gpx files in users posts
Despite the inevitable motorhome-at-a-snail's pace on the A82, I was only a few minutes late meeting Martin (Fife Flyer) and Cat (cmarcol) at Tarbet. Martin drove us all to Loch Fyne. It was good to walk with him again, and a pleasure to meet Cat for the first time. Here they are, making an assault on Beinn Bhuidhe through the bracken... Cat and Martin on their way up from the River Fyne

14 8 14 b.gpx Open full screen  NB: Walkhighlands is not responsible for the accuracy of gpx files in users posts
Another day when the forecast promised better things further west, so I drove to the Falls of Cruachan, to take on the big two Munros of the range. Looking back to Loch Awe, early on the ascent

Conditions were pleasant enough when climbing to Cruachan reservoir and up to Bealach an Lochain. But the clouds didn't lift, light rain started, and there was no view from Ben Cruachan. I still found it an interesting, rocky summit, though. So then it was on towards Stob Diamh, and some careful navigation and foot placement was required, with low visibility and sometimes hazardous wet ground. Moving along the ridge between the two Munros

I did drop out of the clag for a while between Drochaid Ghlas and Stob Diamh. It turned out to be a day with some good views, but not from summits. Stob Diamh was reached, and then I began the descent. The rain came down as I moved back to the reservoir, and conditions underfoot were wet. It began to get a bit drier on the final descent to the car. Driving back on the Oban to Tyndrum road, things began to clear and Stob Binnein looked particularly impressive in the distance.

2014-08-15_0937 103km.gpx Open full screen  NB: Walkhighlands is not responsible for the accuracy of gpx files in users posts
This was a much better day weather-wise, and time, at last, to take on two mountains I've always admired on visits to the Southern Highlands: the two most southerly 1100 metre peaks in the country. There were already cars parked near Benmore Farm when I arrived; Ben More and Stob Binnein were popular hills on this day.

The climb up Ben More from the farm wasn't the painful slog I'd been led to believe it would be. It was steep, but on a path with plenty of foot holds, and pretty quick considering the height of the mountain and the low level of the starting point. View in retrospect of Crianlarich from above Benmore Farm 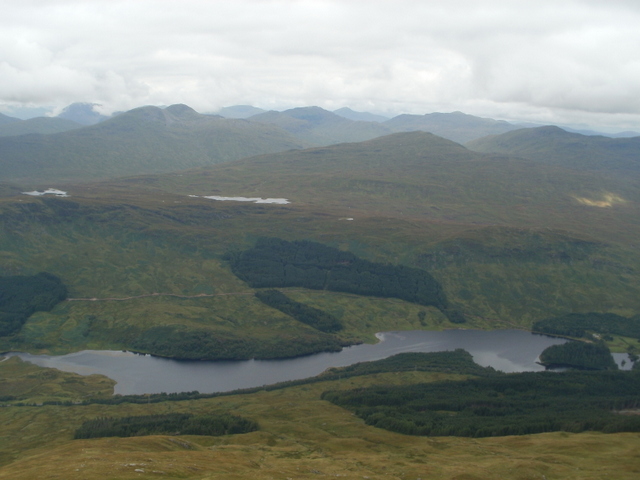 Looking back to Loch Iubhair from the ascent of Ben More

The summit was quite well populated when I reached it, and free of cloud with superb views. Moving on into Bealach-eadar-dha Bheinn, the cloud descended and both summits became obscured. On the pull up to Stob Binnein, the mist began to lift again. I reached the summit: there were clouds around, but plenty of views as well. Looking ESE from Stob Binnein, with Ben Vorlich (Loch Earn) and Stuc a' Chroin in the distance

Looking south from Stob Binnein, there's nothing else as high along the whole length of Great Britain. If I've read the map correctly, the next highest British mountain in this direction would be Snowdon. 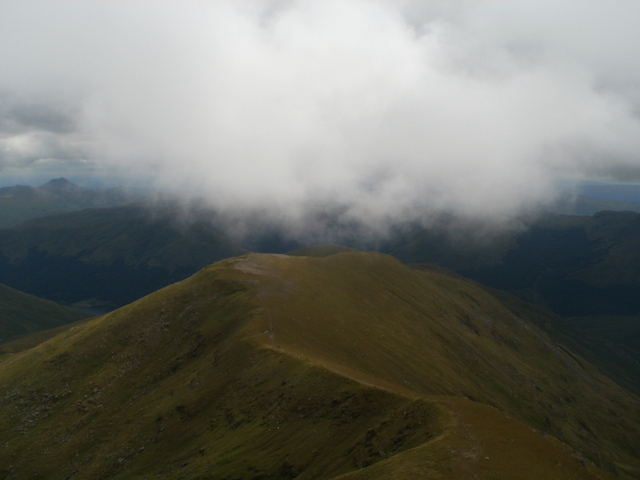 I returned to the bealach, then dropped down to Benmore Glen and the walk out. Returning via Benmore Glen, with Ben Challum in the background

This had been a fairly quick walk for two such big mountains, and I was able to have an easy late afternoon in Killin to wind up the first of my two weeks.

Another fruitful trip, simon - you do like to pack them in - well done

Shame the weather didn't hold up for you....but you still had better views on Ben Cruachan than me

rockhopper wrote:Another fruitful trip, simon - you do like to pack them in - well done

Shame the weather didn't hold up for you....but you still had better views on Ben Cruachan than me

Thanks, rockhopper. The weather could have been worse, and apparently it was further north. So I'm not complaining, but it did mean using up the easier options in the first week, leaving some successive longer days the following week when conditions improved. It was still a great two weeks, though.

Well done Simon, especially for venturing out in what we can only describe as "grotty" conditions

Fife Flyer wrote:Well done Simon, especially for venturing out in what we can only describe as "grotty" conditions

The weather overall wasn't too bad over the whole fortnight's trip. I'm looking forward to walking with you, Karen, Cat and Jimmy again. Hopefully I'll also get to meet some more of our Clachlet Traverse team, which conditions dismantled before the action could take place.

I should have read this one first,shame about the weather,but a very fruitful raid into gods Country.

I should have read this one first,shame about the weather,but a very fruitful raid into gods Country.

Perhaps I should have written this one second, as a prequel. Definitely an enjoyable journey from God's Own County to God's Country.

Pity the weather wasn't more co-operative. You certainly packed a few hills in though - off to read Pat II now ...

There are no complaints about the weather. Places both further north and further south in Britain seemed to catch the tail end of Hurricane Bertha worse than parts of the Southern Highlands did, and I'd brought enough plans to chase the better forecasts.

Ah this brings back happy memories of the first and second year of my munro bagging career.

I like the Arrochar hills, small and yet impressive. And you definitely must go back to Ben Cruachan on a clear day!

Silverhill wrote:Ah this brings back happy memories of the first and second year of my munro bagging career.

I like the Arrochar hills, small and yet impressive. And you definitely must go back to Ben Cruachan on a clear day!

Cheers, Silverhill. I agree about the Arrochar hills. As I've said on the forum before, there are enough Scottish hills I haven't climbed to last a lifetime, so I'll have to climb a Corbett near Cruachan on a clear day at some point.

Thanks for the reply to Part 2 as well.

Super effort bearing in mind the distance you travelled.

Pity Ben Cruachan was in mist. I was up there one evening in late June. Sat up there in a T shirt with no wind. I could see forever!

Super effort bearing in mind the distance you travelled.

Thanks, Ally. It was the distance travelled that made the effort worth it. You've got to take your chance to climb the Scottish mountains when it's there.