So, after yesterday's antics and the issue of Stob Coire a' Chairn, we thought we'd sleep on it (

) and in doing so we had injected a new life into ourselves. So, before breakfast, we headed off to do An Gearanach. Before which, we had to see what the weather was like... Talk about brilliant! Off we go!

Up to Bealach a' Chadha Riabhaich it was, and the up onto An Garbhanach. We'd forgotten we still hadn't made it off the Ring of Steall, so we were pleasantly surprised at how spectacular it was, and were reminded again why it's one of the best munro walks.

An easy but narrow ridge lead to my earliest munro ever, An Gearanach. Ben Nevis. Fact of the day - the peak on the farthest left is almost 40 metres higher than us at 1020 metres, its just Ben Nevis is sooooooo huge! Back along to the tent it was then! You may have noticed the bacon cooking on the trangia

which is the reason for the wild glamping title.

After the bacon we had to pack our house up and onto the packhorse named Dad, before we headed away up to the bealach between Stob Coire a' Chairn and Na Gruagaichean, before heading up to the top of Na Gruagaichean. At the top of the top, I discovered it doesn't (didn't) have a name on the ordnance survey map, so I now pronounce it OOBA JABA. We then headed down about 1000 metres and then up 1015 metres onto Na Gruagaichean. 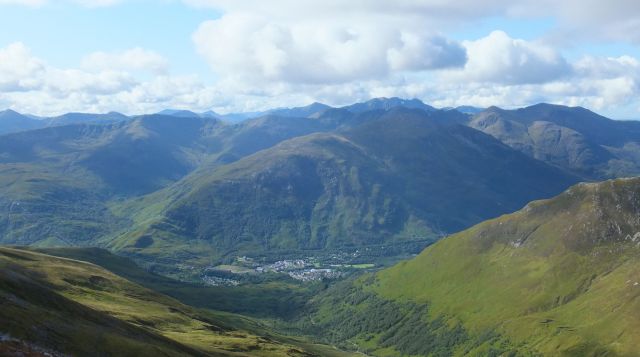 We headed down to the bealach, where we discovered why there were so many stalker's paths around We left the bags here and headed up towards Binnein Mor, the highest, but in my opinion easiest munro of the Mamores.

We then summited our last munro I've never looked down on a munro like this before

We then headed down and up back to our bags on Ooba Dee, and then headed down to Sgurr Eilde Beag, which seemed small, but was still higher than our first munro of the weekend, Mullach nan Coirean by 15 metres. Dad decided we should take the direct route down Sgurr Eilde Beag because of the path shown on the OS maps, so we did that. It turned out to be a very good idea, as once on the slope, the path is maybe even better than the main one all the way to the junction with the main path. From here it was surely just a stroll to Kinlochleven... After what seemed like years we then reached Kinlochleven, where the chippy was closed

, and we were too tired to take any photos.

So - next stop the Cullins in October?

Superb, that looks better than day one. Well done to you and your dad and good luck with Skye in October if you go.

Oh, that was just great!

I have a feeling this won't be your last camping trip??? You'll love Skye - lots of scrambling.

Thanks guys and yeah, this surely can;t be our last trip! Dad's already planning camping whilst doing the last two!

I still can't bear the idea of the descent into Kinlochleven again - it's tourture!

As for Skye, we went in October last year and the weather was perfect, but we then did Sgurr Alasdair, Sgurr a' Mhadaidh and Sgurr a' Greadaidh at Easter, but we were clouded in for those ones. Hopefully the weather will be better this time!