My walking buddy Neil had driven us up to Glen Nevis the day before for our (now annual) trip, we stopped en route in Glencoe to complete some unfinished business on Buachaille Etive Beag. The previous year, we managed Stob Coire Raineach, but before we could manage Stob Dubh, strong winds and heavy rain, forced us back to the car and on to the pub!
Pleased to get Stob Dubh finally bagged, that evening, in the pub (funnily enough!), we had a bit of a debate re where to go the following day, it was a toss up between Bidean nam Bian, and The Ring of Steall. We couldn't decide, so we asked our Facebook pals to decide for us, and we waited for the result.....!
After a rubbish sleep (I've decided I'm not cut out for camping!) we headed to.........Glencoe, and Bidean nam Bian, as that was the winner of the FB poll, but you probably guessed that after the title!
We parked at the car park on the A82, the one with the piper! The weather was great, sunny with a cooling breeze which stayed with us for most of the 8hr walk. After a quick suit & boot, we headed up the path to Coire nan Lochan and onwards to our first summit of the day, Stob Coire nan Lochan. We're heading up there! On our way up the path, we saw a couple of guys across the burn getting ready with harnesses, preparing to climb this cliff, you can just make one of them out in this pic! 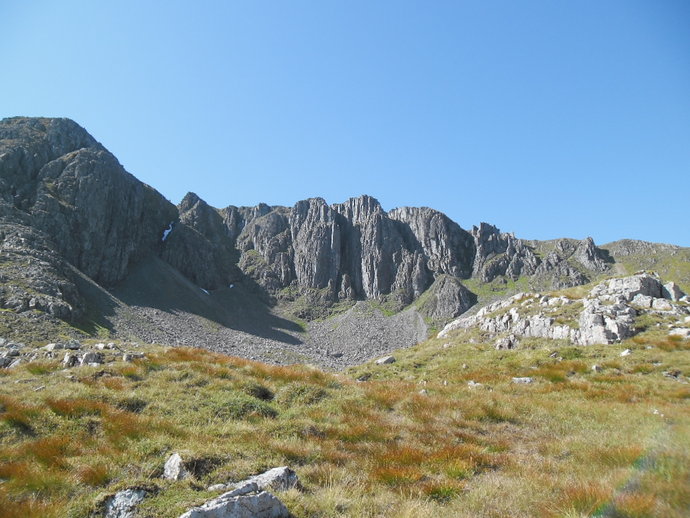 The impressive buttresses next to Stob Coire nan Lochan.

We stopped briefly for a bite to eat below the buttresses, enjoying the views. We then made our way up the rocky "path" to the summit of Stob Coire nan Lochan, I loved this bit! Very hands on and lots of rock hopping From Stob Coire nan Lochan, we headed down to the bealach and looked up at the steep climb towards Bidean nam Bian, this was quite daunting, but once on the path, it was pretty easy, I just stuck to the "three points of contact" rule when I could. I enjoyed this bit as well The steep, hands on path to Bidean nam Bian.

The summit was soon reached and again the views were stunning, we stopped awhile, taking them in, and refueling, we could see the path ahead of us along the ridge to Stob Coire Sgreamhach, it looked quite straightforward after the rock hopping and hands on scrambling of the previous hour and a bit! Looking towards Ballachulish and Loch Leven, with the twin munros of Beinn a'Bheithir on the left. The ridge across to Stob Coire Sgreamhach.

We set off along the ridge with the fantastic views down into the Lost Valley and across to ridge on the other side of the glen, the path passes the Lost Valley Buttress and descends to a bealach where we met with a group having a break, we had a quick chat and then made our way up to the summit of Stob Coire Sgreamhach. It was a quick descent back to the bealach, and then a clamber down the steep eroded path into The Lost Valley, and then the long walk back. Having a break in The Lost Valley

We arrived back at the car hot, sweaty and sunburned, and in need of some refreshment, Neil had, thankfully, a plan in place, and drove us to the Clachaig, where a delicious pint (for me at least, Neil had lemonade & blackcurrant!) was quaffed before we made our way back to the campsite...a fine end to a fine days walking! That evening (over a few more pints!) we wondered how the h*ll the MacDonalds got the cattle up there, we pondered this for a while and thought about who could give us an answer and decided to ask TV historian, Neil Oliver (who Neil, happens to follow on Twitter!) so a tweet was promptly sent...we're STILL waiting for an answer!!

Great pictures of these fantastic hills!

Great pics. Bidean is my favourite munro. Not been there for a few years and usually tackle it from the Lost Valley asscent. I love the serenity when you are on the bealach at the back of the Lost Valley.

Great read. Love that photo of the Lost Valley.

The last photo is my favourite. Really makes me want to be there.

Nic report. Done this a couple of weeks back and had a great day, weather much like yours. It's a stunning place. One I will def do again.

Thats the kind of day you want for this walk, superb.