This was the second day of a two day trip to Scotland. I'd done Ben Chonzie the day before.


From the Ben Lawers car park there's a good tourist path up to the top of Beinn Ghlas. There's only a short descent from Beinn Ghlas before you start climbing Ben Lawers. I came back down Ben Lawers and then followed a path to the right which goes around the side of Beinn Ghlas. From the bealach between Beinn Ghlas and Meall Corranich, there's a path which leads off to the right.This path is a bit steep and narrow, with some easy scrambling, but it leads quickly up to the third Munro summit of the day. 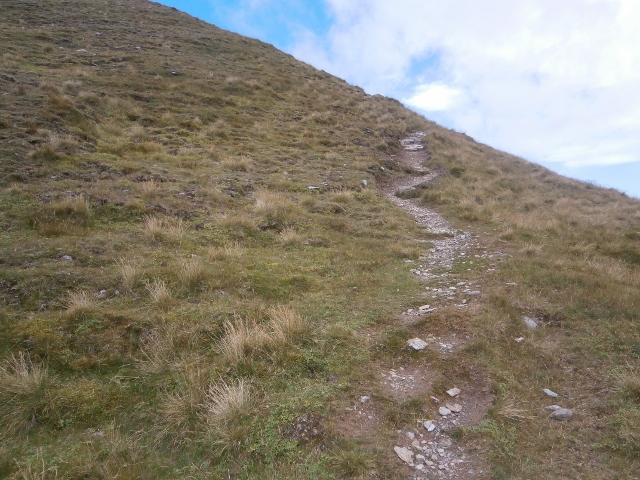 A long grassy ridge leads north from Meall Corranich, but you have to go down off it to join a ridge further east which leads up to the next Munro, Meall a Choire Leith. Once you find the right path, it's an easy walk up to the flat summit. From here I got the compass out and headed off to the south-west.There was no path visible at first, but soon after leaving the summit area I found a fairly clear path which led down the hill, over a small stream and on to a small dam on the Allt Gleann Da Eig. After the dam the path became less clear and the ground was quite rough and boggy as I headed up towards a ridge. Once over the top of the ridge, the Lochan na Lairige and the road that goes past it became visible. I then had a couple of miles along the road to get back to the car, and the long drive home. The road comes into view. Walking back to the car park

That’s good going, drive up from Manchester, do 5 hills over 2 days and then drive back!

Luckily you had clear weather. Well done for the Ben Lawers 4, including the walk back along the road. But I suppose there are worse roads to walk back along. At least this one in quiet and scenic.