Left Cumbria at 7.00am on Saturday morning and headed for Crieff. Left the main road and took the single track road up Glen Turret to the car park at the Loch Turret Reservoir where there is ample parking. Booted up and began our walk at 10.20am. Accompanied by Malcolm, Peter and John. 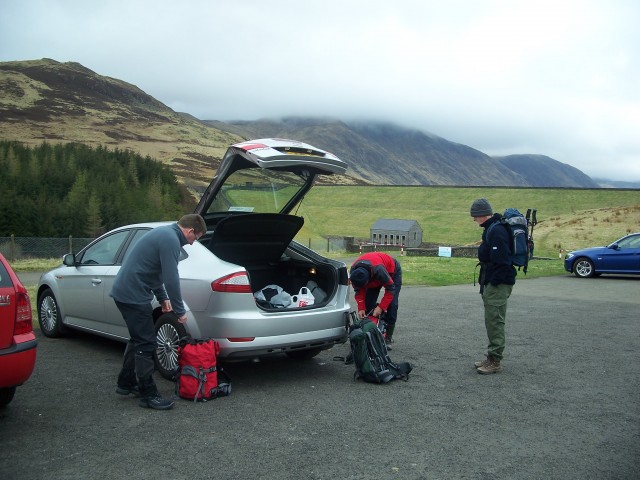 Heading towards the dam

The track along the east side of Loch Turret makes for good walking and takes you 6km aprox. up the valley just passed Lochan Uaine. Views over to the otherside of the side of the glen were good with a clear ridge line in view, however Ben Chonzie itself remained in cloud. 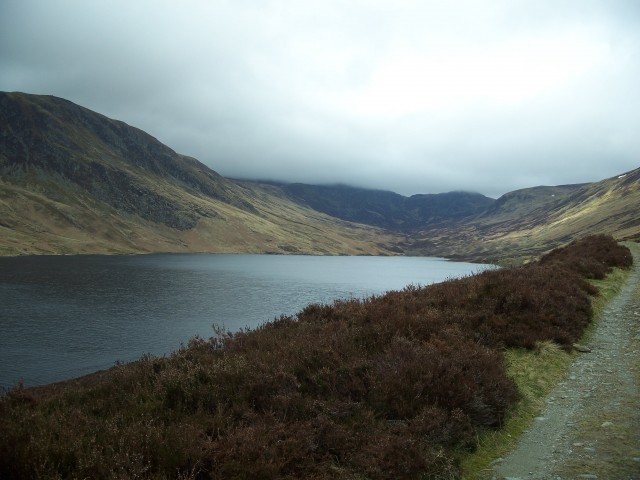 View across Loch Turret towards BC Best view we had of BC

At this point, instead of climbing directly up to the small bealach we decided to head in a more northerly direction and join the end of the east ridge. We then climbed steeply to the cairn on the minor top before heading down the bealach. 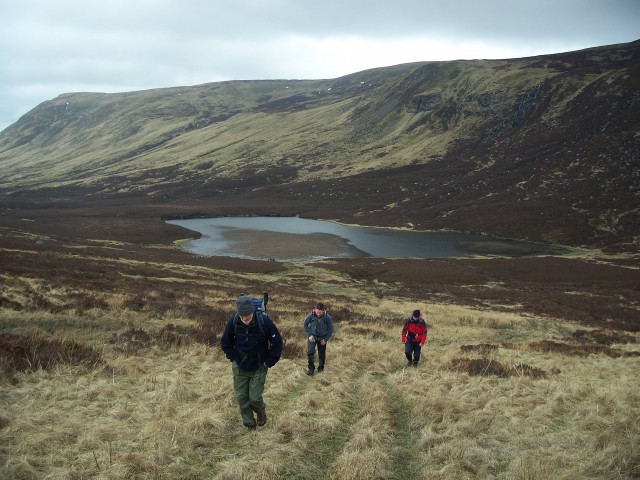 Climbing towards the east ridge

We had limited views to the east and the north. 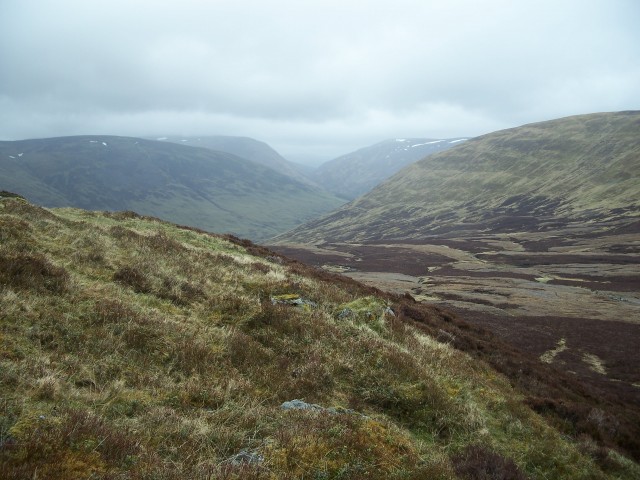 Looking east from the ridge From the bealach the path was distinct, which together with the line of fence posts provided comfort as we entered the cloud. Although the temperature had remained comfortable for walking, within about 50m of the summit the temperature dropped and it began to snow. At the summit (1.30pm ish) we donned coats, took the obligatory summit shots (without any views!) and then headed straight on, aiming to get out of the worst of the weather before we would have some food. Ben Chonzie summit, in the snow! Its cooled down a little

We found the next line of fence posts heading south and followed these through peaty ground until we dropped out of the clag and found a place to eat at the low point before the slight rise to Meall na Seide. Having eaten and then ready to move on, John got severe cramp on his inner thigh. He managed to walk it off and consoled himself with the thought of a masage when he got home!!

We had probably taken too long to eat and should have stopped before reaching the summit of BC. Looking back to Meall na Seide

It was over Meall na Seide and then up to Carn Chois, a nice little peak with trig point and views down to Crieff, Comrie and west to Ben Vorlich. Although it had cleared to some extent, the light didn't make for good photos. Onwards and upwards to Carn Chois Shortly after leaving CC we came across a group of students and helped them with a 'team photo', and not long after this made the descent down the col between CC and Beinn Liath. 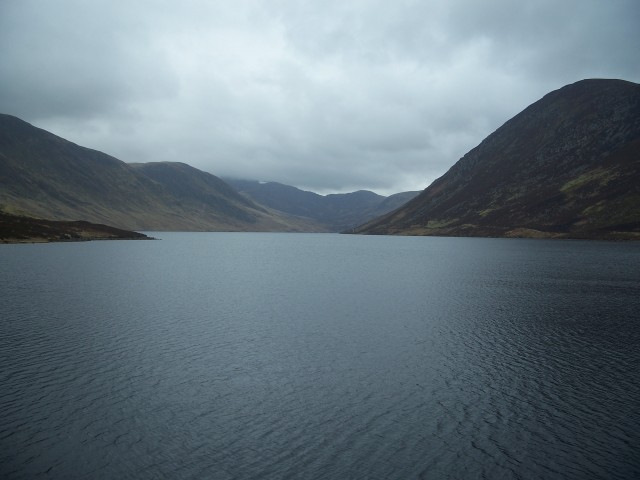 From the dam wall

I know some hill walking books call this a dull mountain, however I must say the route we took provided for a good day out and if the weather had been a little better, I'm sure views would have been good to the other mountain ranges.

Re: Ben Chonzie via Glen Turret

hi, this is the best route for Ben Chonzie by far..... the Glen Lednock route is the reason people think this is not a very interesting Munro. did this route on 5th august 2010..weather was good and great views all around. took exactly 6 hours but spent a lot of time taking photos from the edges of the return route.will post the pics when i work out how to upload to the site !!
thanks for the report and the detailed map.

Re: Ben Chonzie via Glen Turret

Nice Report, and some good pictures.

I climbed Chonzie back in June and had a great time. It was anything but dull or boring.
I also climbed from the Glen Turret side, although my own route was slightly different to the one you took.

Having only climbed this hill from one side, I can't say which of the two options (Turret / Lednock) offers a more interesting day out. I read a few reports about Chonzie before deciding which side I was going to tackle it from.

That's what swung it for me.