Another post on the 'meets' thread this time from Rachel who I have never met, yet alone walked with

The arrangement was to meet in Invervar at 9am, which is a nice leisurely start for me, but Rachel was driving down from Aberdeen just a mere 3 hours

During the walk I can see why I hadn't remembered much about it, the terrain was not what you would call exciting

I set off from Fife at 7am as the AA routemaster reckons it takes just under 2 hrs to reach Aberfeldy, as it happened I was in the car at 8.30 so was able to get ready at a nice leisurely pace, whilst I waited for Rachel. Whilst waiting a chap in a humungous Fiat motor home arrived & asked where does one park for the Glen Lyon hills so I advised him & asked him if he wanted to join us, once Rachel arrived

On Rachel's arrival we introduced ourselves & Derek joined us The car park, me first & it was full on our return, about 8 vehicles Looking back, note bracken - just as well I used to it, the last 3 walks!! The walk/navigation didn't get off to the best start, we walked across the road from the car park right next to the phone box, only to be advised by a local resident we were heading the wrong way

So back to the road and into Invervar, which consists of a couple of properties before turning right and through the gate. The uphill walking then began, Derek was in full flow (verbally) Rachel and I had our listening hats on and we soon reached the top edge of the forest.
We stopped for a quick drink, route check and to catch our breath as we had set off like mountain goats

It was only when we attained quite a bit of height after a real struggle, that we got the maps/route out and had a good look at the surrounding terrain, that we realised our humungous blunder, we had headed north instead of west

We could see Carn Gorm in the distance and the ridge that we should have gone up, so we had to come up with plan B and how we were going to get back on track

We decided to traverse across the higher slopes of Meall Luaidhe and head to the bealach between Meall Garbh and An Sgorr, that way we wouldn't lose any or much of the height we had struggled to gain

Our detour had also added an extra hour onto our planned schedule, when we reached the bealach we had a pit stop as we were all a bit peckish As we neared the summit of Carn Gorm we met Ann (hi Ann) who is a lurker on WH (and doesn't even know her user name) who was on her way down. Ann gave us a target to catch up, which we duly did just after the next summit

I won't mention the fact that Rachel, who said that she is a slow walker, turned out to walk at a fair rate of knots, Derek and I were almost running to keep up A view down Glen Lyon 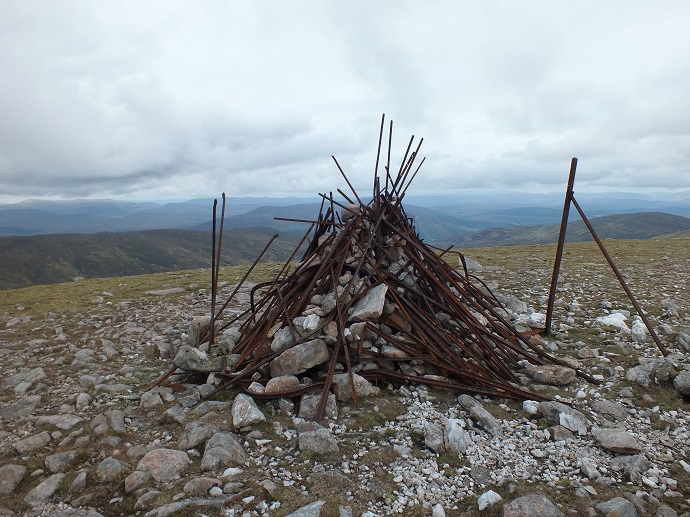 A future cairn in the making, or is it 'modern art'? Rachel relaxing, not for too long though Lovely rock, had it been a bit smaller & fitted in my rucksack it may have been Fife bound

The walk from Carn Gorm to Creag Mhor was easy and uneventful, Derek wasn't in a hurry so he decided to have a long lunch & tag along with Ann for the rest of the day. Rachel then turned on the overdrive and I had to almost run to keep up with her 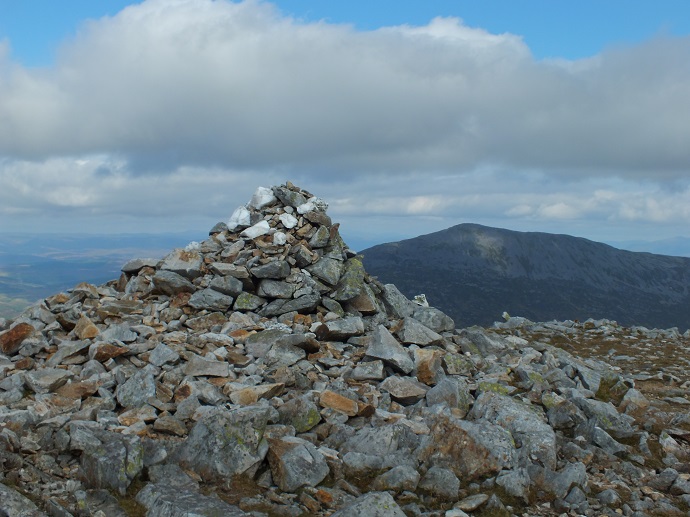 Arty photo, summit of Creag Mhor with Schiehallion in the background Schiehallion zoomed, a few folk on the summit Glen Lyon from on high before the descent

Now for the descent, (Error number 3), we started off following the path and all was well, then as usual it either disappeared or we lost it

We had a good scan over the surrounding terrain and were unable to see any trace of a path, so we just romped down the ridge over heather, grass and the occasional rock or two

We were quite pleased with ourselves having located a path, however (Error number 4) this path was leading us in completely the wrong direction, but we persisted with it in case it started to head west, which it didn't

The path/track took us nearly 2 miles east of where we should of ended up, after clambering over 3 fences, struggling through 2 gates, scaring umpteen deer, we eventually reached the road

Great day out in ideal walking conditions and great company, not sure I will return, they are 4 easy Munro's but certainly not memorable for the right reasons

Only took 54 photo's which isn't many for me

You sure you still want to come at weekend?

Enjoyed that Martin! ..always nice to hear I'm not the only one that goes "exploring"!!

I prefer to think of it as trailblazing! Despite the various navigational issues I still had a good day out! Thanks for keeping me company for a day in the hills.

And the pace you and Derek set off at you can hardly call me a fast walker!!

still, you got far better views than I did having spent most of the time in the clag

We made the same exact mistake on the descent! Very annoying.

that's what happens when you have company, too much gassing and no checking on the map

these things don't happen when you walk alone, well you have to blame it on someone don't you

Nothing wrong with going off the beaten track!

Good to hear you still enjoyed yourself.

Broggy1 wrote:We made the same exact mistake on the descent! Very annoying.

Reassuring, the end of the descent wasn't much fun, climbing fences, but we could see other folk before us had done the same Thanks for that Gordie, you know how to rub it in

We must have passed the bridge by following the track, however only noticed it when I took the photo a short time later

Memo to self "pay a bit more attention when walking"

Not like you to get lost martin,don't think I ever did a walk with you that was straight forward .

Martin, I bet you'd have found the 'correct' route if you hadn't had such good visibility!

simon-b wrote:Martin, I bet you'd have found the 'correct' route if you hadn't had such good visibility!

That sounds like a good excuse Simon, I'll go with that one