It was with some foreboding as my wife and I drove north to Ullapool. The weather in the NW Highlands over the two weeks prior to our trip had been pretty awful. But, we were meeting our [good weather] talisman at Inverness airport (arriving from the Ohio); this time on the first part his honeymoon! This was Craig’s 4th visit to Scotland; he loves the outdoors – the walking and fishing. Naturally, he wanted to show it to his wife. Each time he had joined us in the past (’89, ’97, ’09) we had enjoyed wonderful weather and as we drove up the forecast was improving all the time; the omens were good.

On the drive through Leckhelm we saw some of the destruction caused by the landslips that blocked the A835 two weeks previously. On the south shore of Loch Broom the scars of 2 large slips could be seen clearly – I have been coming to Ullapool since ’66 and never seen anything like this. Landslips on the south side of Loch Broom

One of Craig’s requests was to climb a few more Munros; so, with the forecast looking good we decided on Conival & Ben More Assynt. We left the car about 9:30 am and made our way on the track past the hostel towards Gleann Dubh. A guy looking at the geology in the area joined us for a short way before ‘disappearing’ into the valley to look at some sink holes. Time for a couple of pics looking back to Quinag; the morning cloud had by now mostly burnt off and it felt warm. Looking back to Loch Assynt and Quinag

The walk beside River Traligill was easy going, although the path had been undercut in a couple of places – probably as a result of ex-hurricane Bertha; the erosion looked very recent. As we ‘turned the corner’ to start climbing beside Allt á Choinne’ Mhill we could see clouds scurrying across the shoulder leading to the summit of Conival. Whilst it was relatively calm at low level I knew that as soon as we hit the final slope up to the summit it would be windy and [very probably] cold too.

Still at low level, we found the ground to be very wet with water running down the increasingly rocky parts of the path; as there had been no substantial rain for several days it emphasised the amount that must have fallen beforehand. The path was steep and badly eroded in places, boulders of milky quartz showing through the peat. Craig - the path steepens from here and becomes ever more rocky

We made it up to the small bealach in reasonable time and started up the final slope towards Conival. Now walking over schist (I think), rough and angular, but made easy by a well-worn path that zig-zagged up the slope. Looking back, the view was amazing; so clear. It was much colder in the wind, which at times blew hard as a cloud passed overhead and would then die away to almost nothing. North to Arkle and Foinhaven

The slope soon eased out leading to a short level (ish) bit that lead to the summit cairn and by 12:45 pm we reached the summit – 3¼ hours so OK. Time for sarnies and pics. 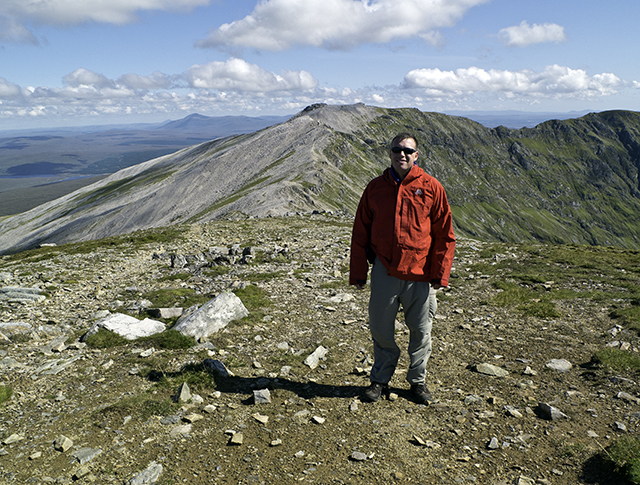 Shortly after arriving we were joined by a couple (from Perth I think) who we thought were in front of us; indeed they were until they made a diversion to the Neolithic caves – very impressive we were told. I think they had a good deal more energy in reserve than we two; looking as they did, seasoned hill climbers. Despite the brilliant sunshine it was cold – no more than 6 – 7C and made to feel more like 0C in the wind; so on to Ben More Assynt and get warm again in the process. The walk so far had been pretty good with only short bits over shattered rock; that was about to end. Although there weren’t any really ‘nasty’ bits the ‘ups’ and ‘downs’ over shattered schist made for slower going; as I’ve oft said before, it’s not the going up stuff like this that’s a problem, it’s the coming down. Quite how the wind contrived to blow on the ‘down’ bits I don’t know, but it did; especially when the wind gods sensed I was about to put a foot on a wobbly bit! Still, we made it to Ben More Assynt [and back] as otherwise I wouldn’t be writing this!

We went to the shelter first and then to what we think was the summit cairn on top of a small rocky outcrop. It was at this moment that the wind blew at its most determined, as can be seen from Craig’s pneumatic strides. The views were amazing; to Bens Hope, Loyal and Kilbreck northwards and to an increasingly hazy Coigach, AnTeallach and the Ben Dearg group towards the south. Craig in the shelter on Ben More Assynt 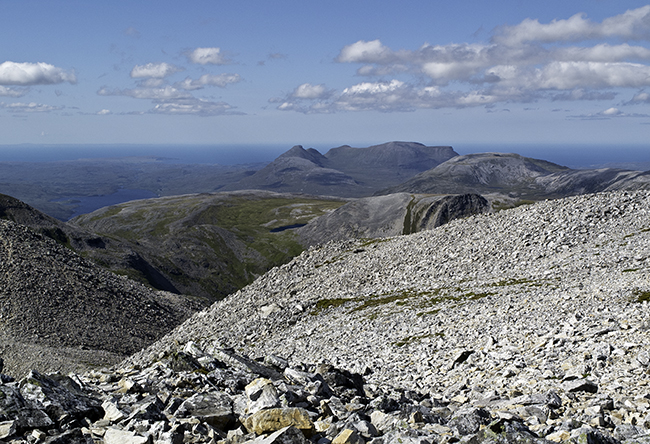 Looking back to the shelter on Ben More Assynt

Despite the wonderful views there no time to dally, so we made our way back to Conival where we paused briefly to finish the food before the walk out. By this stage Craig felt [and his legs certainly did] that he had done 3 Munros; I did explain that the SMC didn’t quite see it his way, but who could argue against the fact that he’d had to climb Conival twice.

Anyway, we ever more slowly made our way down; our legs were tired and this was not the time to hurry. The last ‘easy’ 3 km seemed to take much longer than the walked in, but eventually the hotel and hostel hove into view and we were greeted by a sight all too familiar me. That is, of my car being the last in the car park! It was 7:15 pm and we had taken nearly 10 hours [including stops]; no matter, we’d been gifted with another amazing day on the hills.

We enjoyed another amazing week in Ullapool which ended all too quickly – so allow me a little self-indulgent moment with one final pic – a fitting finale I thought. Re: Craig done it again!

What an amazing day you had for these two hills!

The view are just stunning. I’m yet to go that far north for the munros, but definitely look forward it.
If Talisman Craig lived in Scotland, he would soon be a very popular walking/ bagging buddy!

Re: Craig done it again!

Thanks for sharing your excellent photos. Was over on Breabag that afternoon and descended via Traligill (having gone up via the Bone Caves) but, you must have been behind us by then based on your timings. Was a beautifully clear day but that stiff, cool breeze was a challenge the higher up you were...the views more than compensated