Beinn na Lap, Sgor Gaibhre, Carn Dearg.gpx Open full screen  NB: Walkhighlands is not responsible for the accuracy of gpx files in users posts
I had arrived at Corrour station the previous night, from Tulloch where my car was parked. The journey was fantastic, with glimpses of Loch Treig and views down Glen Nevis, bringing back good memories of a DIY route some years ago, when a friend and I had walked from Fort William to Kingussie. It was mid-May and freezingly cold. The night before we had stayed at Meannanach bothy and were now headed for the warmth of Loch Ossian youth hostel. We marveled at this railway line cutting across the middle of nowhere and remarked how special it must be to make such a train journey.
So a double whammy for me today, returning to an area I had fond memories of and travelling by train. 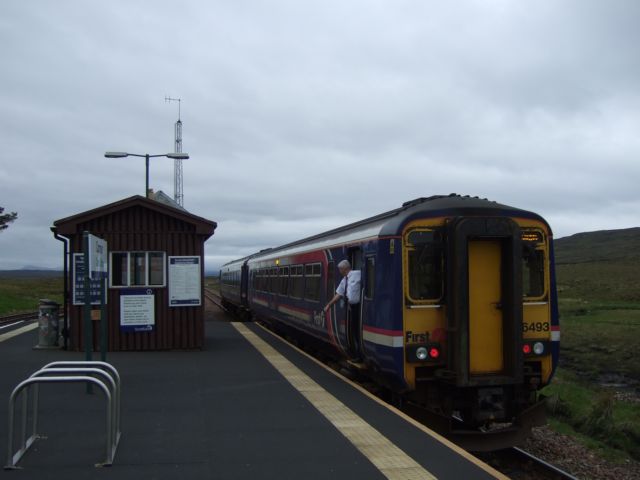 The train leaving from Corrour station

The approach of the youth hostel and Loch Ossian was fabulous. There was a nice crowd booked in at the hostel, a combination of walkers, fishermen and baggers. With everyone gathered in the kitchen/ common room it made for a very sociable evening. 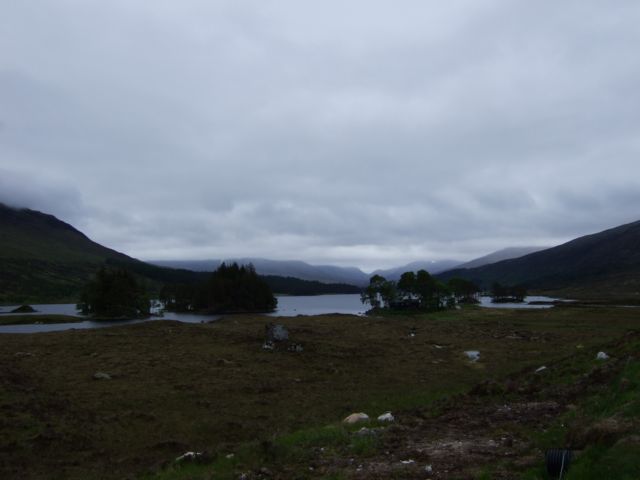 Loch Ossian and the youth hostel

Later in the evening I went outside to take some pictures of the loch. There was no wind and the loch was like a mirror. Mesmerising. 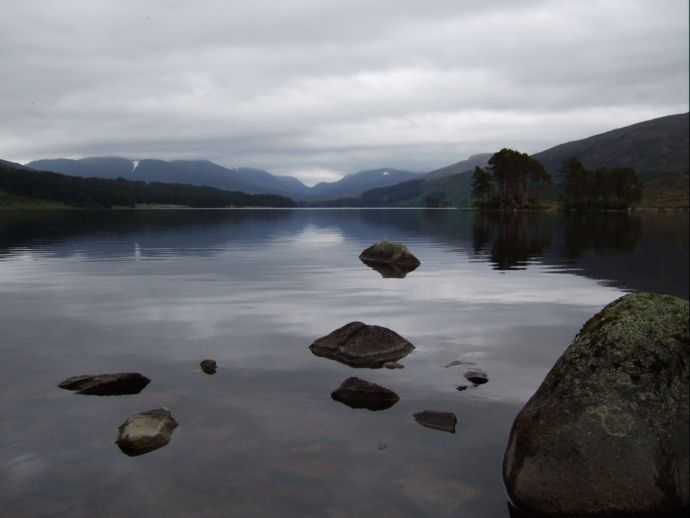 Loch Ossian and the view towards the Ben Alder hills 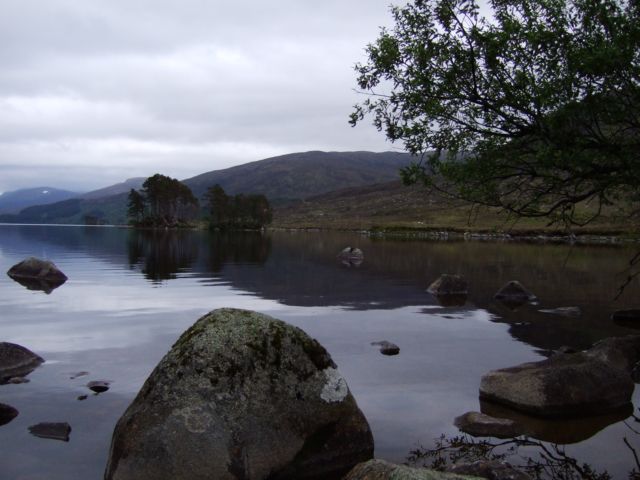 The next morning the views were somewhat greyer. 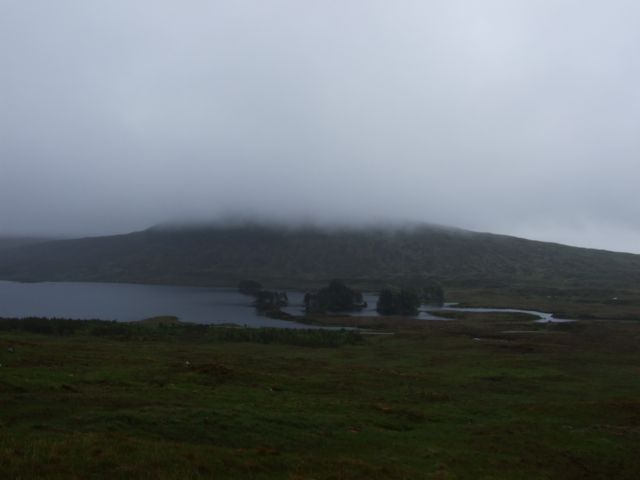 Work on the hydro scheme was already in full swing when I arrived at the foot of Beinn na Lap. The path up is very faint, but it goes in the obvious direction (more or less straight uphill) which helped to relocated it whenever I had strayed off it. The ascent was rather uneventful. Once on the ridge there was very little visibility. The path keeps slightly to the right of the ridge and I was concerned that I might not be able to see the ‘summit announcing’ lochan from there, so I started walking on the crest of the ridge, which was much rougher and after a while the lochan emerged from the mist. On the summit my GPS confirmed that it was the summit. 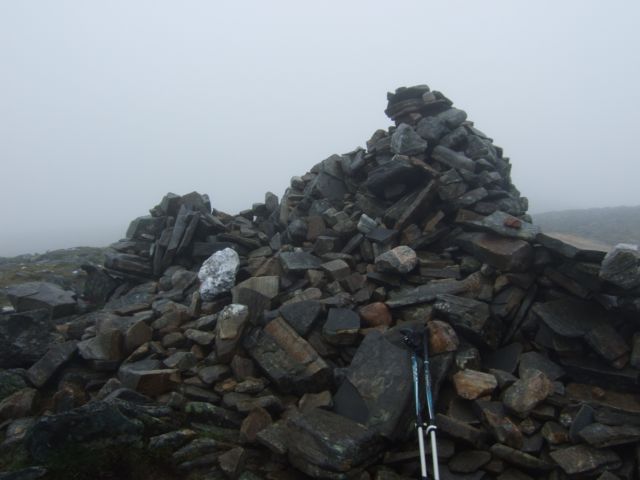 No views, just wind and rain, so a quick sandwich and back to the lochan. Here the excitement of finding a suitable route down the eastern slope began. The map showed crags to the east and south east of the summit. With a southeast bearing from the lochan I should be able to avoid the worst of them. This was correct, first hurdle down. Next, get below the cloud base. This was a matter of taking frequent ENE bearings and walking to the next identifiable ‘landmark’ or anything big enough to have an outline in the mist.

Finally below the cloud, I was pleased to find myself still on course. Now for finding the Allt Loch na Lap, which would hopefully get me down to Loch Ossian in a pleasant way. Well, it was pretty soggy on the lower slopes of Beinn na Lap, with streams aplenty. Also, the edge of the forest is not as sharp as the map leads one to believe. But I saw something that vaguely resembled the wooded ‘protrusion’ next to the river on the map. So that’s what I headed for, trying to avoid the worst of the squelch.

At the fringe of the wood the banks of the Allt Loch na Lap are fairly steep, almost like a gully. I found a way down near some stepping stones, crossed the river and clambered up the opposite bank onto the path. The map does show a bridge further upstream though. I followed the path on the east bank of the river downhill. What a gem of a route this is!

A babbling stream, a few waterfalls, lush pines, some deciduous trees, lower down rhododendrons. All on a gentle slope and a good path. Lovely! 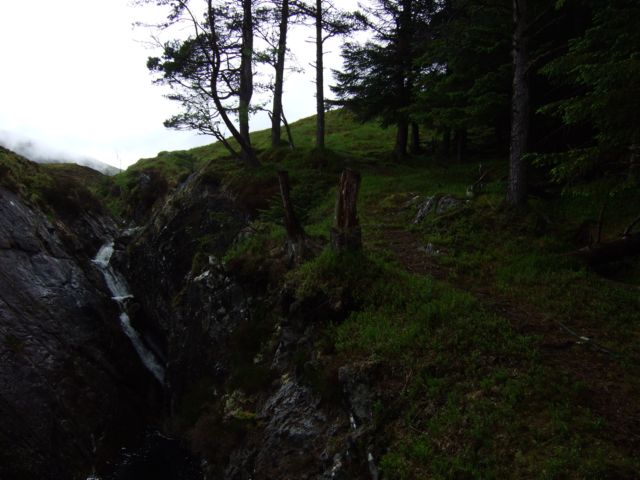 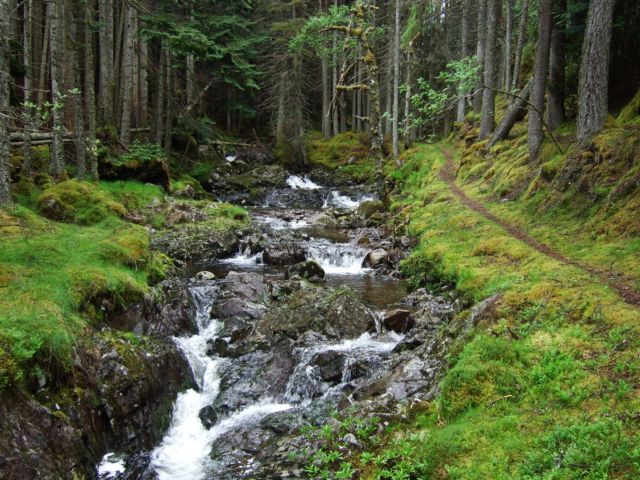 The woodland path further down

The pleasanteries continued along the loch side on the excellent track. Lots of flowers, birds, moss-covered tree stumps and of course the loch. With an outdoor pool! 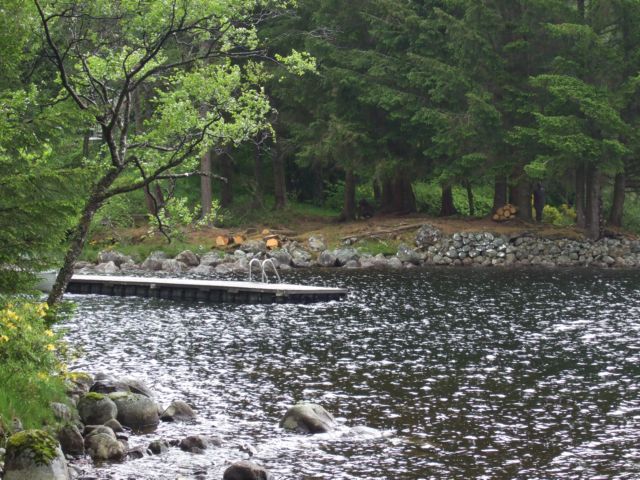 Things had changed a lot north of Loch Ossian since I last was here. There was now a track of road-quality heading up along the Uisge Labhair, all for the hydro scheme. I remember very well when it was still a wet ‘path’! A few years ago, on our way to Kingussie, my friend and I were desperately trying to find some drier ground higher up, until it finally dawned on us that this was not going to happen unless we were prepared to go up to munro height. So we dropped down to the bogs again. 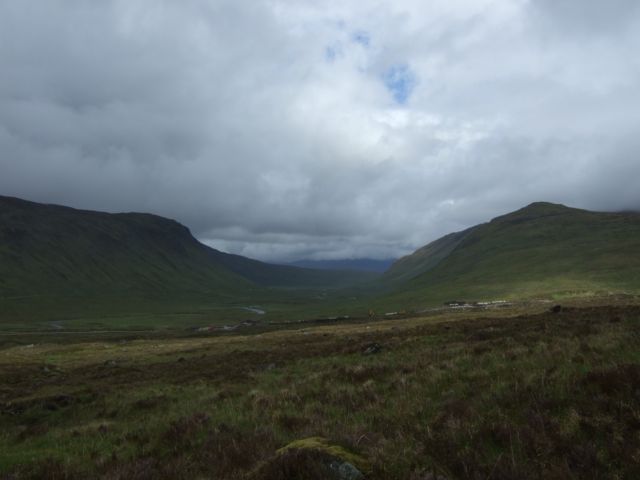 I contoured the tree stumps of the former copse, headed towards the fence (there is a gate roughly in the middle) and then uphill towards Meall Natrach Mor, back into the cloud. 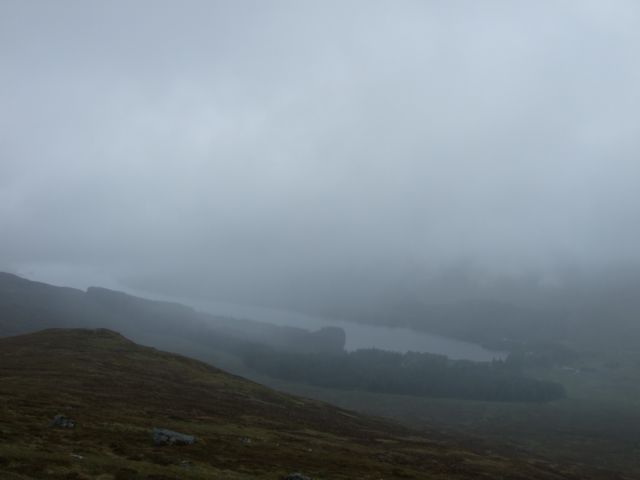 Still some kind of view at Meall Natrach Beag

Hard work. The less said about that ascent the better. Onwards to Sgor Choinnich. The mist was playing tricks with me, making the slope look flat. It was weird: I knew I was walking uphill, but it looked flat and it was very hard work. Extremely demoralising! I was glad to arrive at Sgor Choinnich and walk downhill.
Strangely enough the ascent of Sgor Gaibhre was hardly any effort. As there were no views I didn’t hang about. 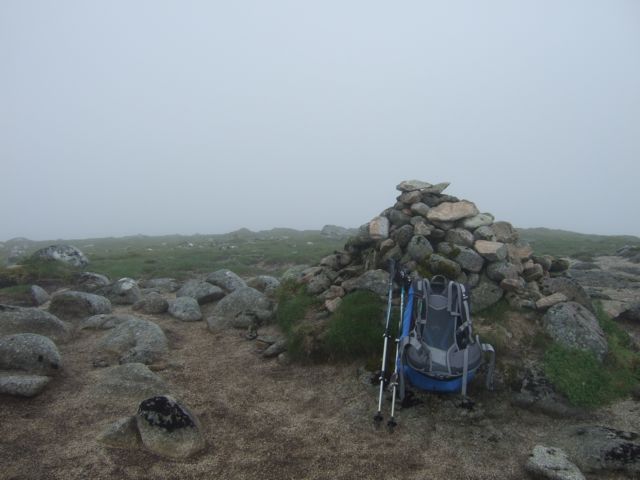 The bealach Mam Ban wasn’t too boggy and it was quite fun finding a way through the peat maze. 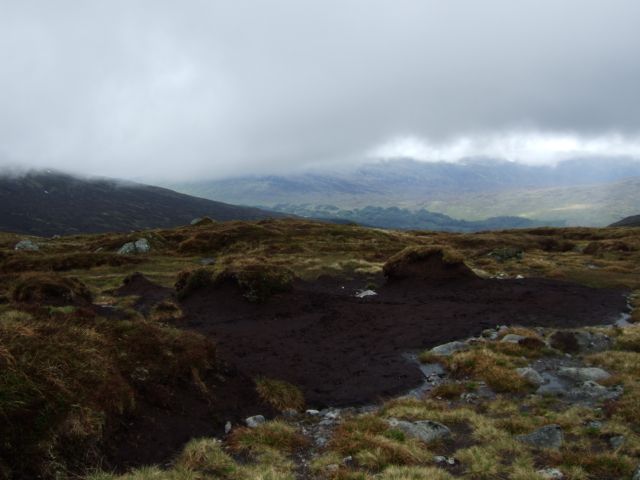 When I looked back to Sgor Gaibhre the cloud had shifted. There was even some blue sky! 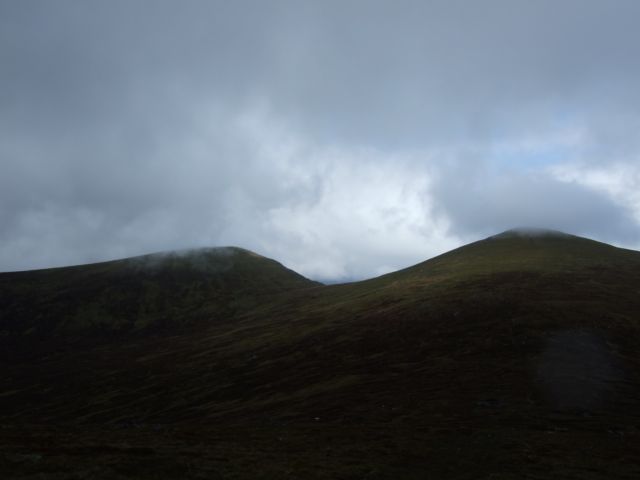 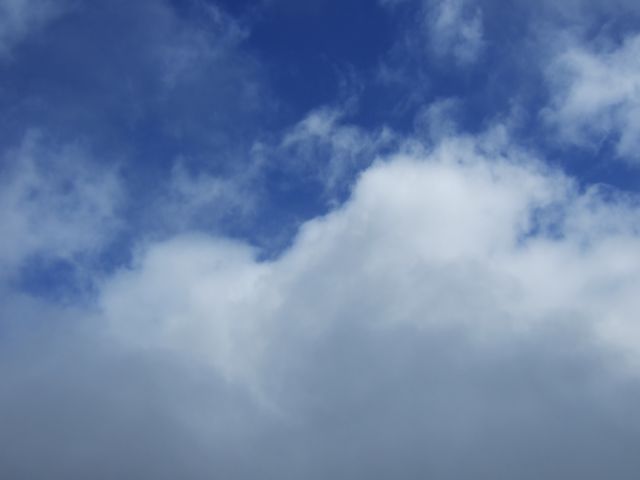 What followed was an uneventful ascent up Carn Dearg, with no views. 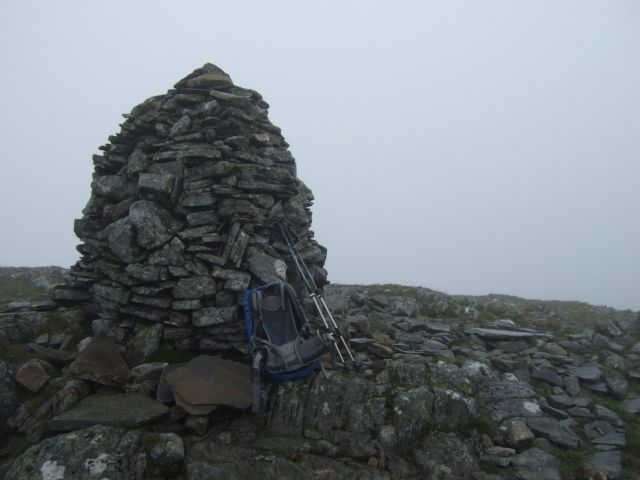 Then down to Loch Ossian over boggy ground. With no visibility I re-applied the take-bearings-and-walk-to-the-next-identifiable-landmark technique. At some point there was a large white shape looming up in the mist. Oh no, not a giant snow field, please, not in the mist! To my great relief it turned out to be Loch Ossian, materialising out of the thinning cloud. Below the cloud base I could now also see the path going west from Peter’s Rock. Finally something to aim for again. 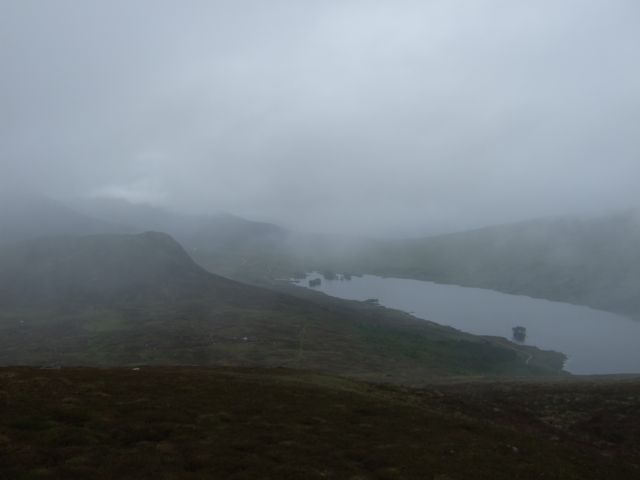 Path from Peter's Rock in the distance below

The walk along the path and further down track was pretty wet, not much different from the hill side. But luckily it was all over quickly. 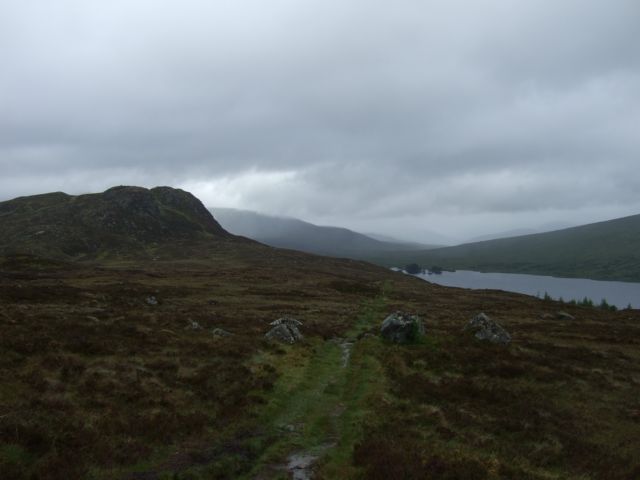 Wet path back to Loch Ossian

I had booked another night at the youth hostel, so that I would have had the flexibility to do today’s hills over two days. And of course there was the attraction of Loch Ossian and the remote setting of the hostel! Like yesterday I spent a great evening in the excellent company of people who all like the outdoors.

It is very doable for a reasonably fit walker to climb these three munros in between trains, without an overnight stay. It took me 9 hours and I hadn’t hurried. If anything the mist had slowed me down.

That sounded a lovely day. I had been thinking about these 2 Munros (combined with a few others) but never thought about a night in the hostel. From your descriptions it might be an option for the shorter nights

Thanks Mountainlove! I think these would also be nice with a dusting of snow!

Great report. It sounds like you really enjoyed these hills, but pity you didn't get the views. Love your pictures of the still loch!

Thanks Annie! Views would have been nice but it was just great being back in this area. And that image of the still loch more than compensated for the grey day that followed. It is a very special place.

Looks like you had the kind of weather we did when doing most of the Mamores. Good report.

The train is a bonus - I've only ever passed through Corrour on the sleeper - undoubtedly one of the best lines in the country. Stunning scenery

Great report Silverhill - shame you didn't get any views from the tops but good to be out in the hills anyway. I've still to climb these and I'm toying with walking in from the road to Rannoch Station when I get round to them.

Only been to Corrour once a number of years ago when Andrea and I got the train up from Rannoch then walked back - seem to remember it was a really nice day.

rockhopper wrote:have only been here once but did enjoy it - brings home the remoteness as the train leaves you on the platform - that looked an enjoyable trip despite the mist- the YH sounds good too - cheers

Thanks rockhopper! This area is definitely worth returning too!

NevJB wrote:Looks like you had the kind of weather we did when doing most of the Mamores. Good report.
The train is a bonus - I've only ever passed through Corrour on the sleeper - undoubtedly one of the best lines in the country. Stunning scenery

Thanks NevJB! Hmm, must catch the Caledonian sleeper some time, if only for the scenery.

Gordie12 wrote:Great report Silverhill - shame you didn't get any views from the tops but good to be out in the hills anyway. I've still to climb these and I'm toying with walking in from the road to Rannoch Station when I get round to them.
Only been to Corrour once a number of years ago when Andrea and I got the train up from Rannoch then walked back - seem to remember it was a really nice day.

Thanks Gordie12! That sounds like an interesting route for these two from Rannoch station. I look forward to your report!