Well,,what can you say, a woman on a mission. A last minute change of mind for 4 big hills on a long circular walk.

I'd been out with Margaret on Meall Ghaordaidh yesterday and had this quartet in mind for today but decided last night not to bother. With John working on Sunday, discussions over tea and toast at 8am soon turned to what to do. By half 8 I'd reverted to plan A and was running around getting organised to head off. Arriving at Dalrigh shortly before 11am I knew I had about 10hrs of good light to cover the circular route of just over 26km.

The track up to Cononish farm is a cracking walk and I kept my trainers on for this section with my boots packed to change into for the climb itself. I was passed by on cyclist, who, strangely enough, I never saw him or the bike again!!!

Did see someone heading up Beinn Chuirn to the North but wasn't him. 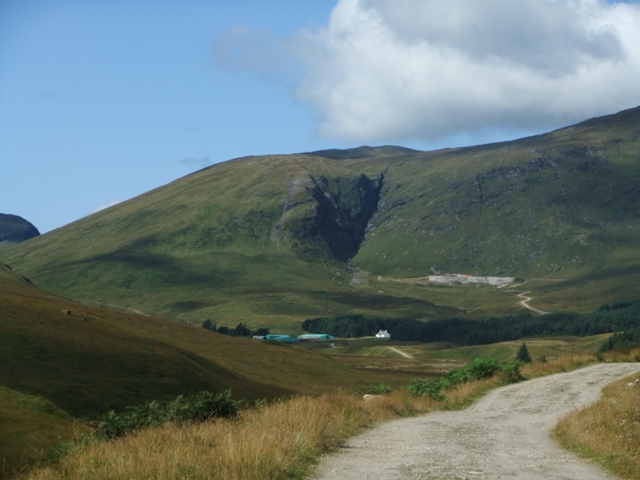 Cononish Farm and the lead mine above The weather was fabulous and I enjoyed the walk up the glen, passing the farm under the lead mine with Lui laid out before me. Passing under Oss and Dubhcraig, I could check out my options for descent. With daylight hours and bog in mind, my plan was to come off Dubhcraig , heading North and back down to the track at Cononish.

Reaching the end of the track, still in my trainers, I passed a back pack, sitting by the road, not hidden and with no sign of anyone around (no bike, so wasn't the chap who passed me earlier) 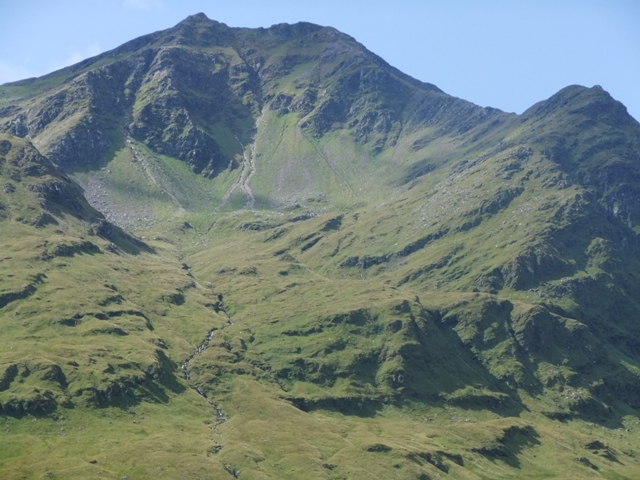 Up into the corry 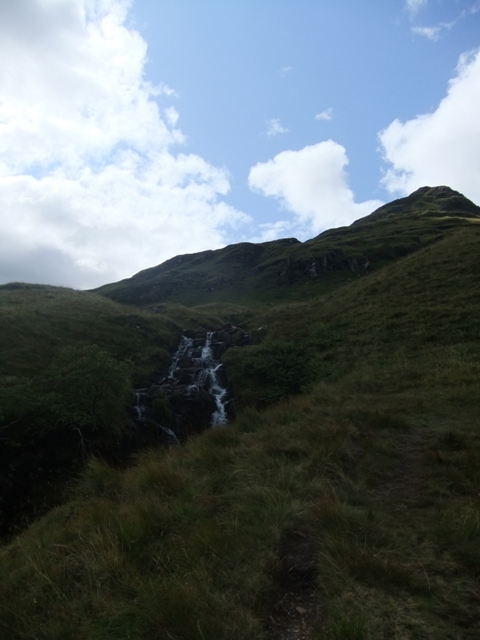 The path following easily up the burn

Looking up into the corry under Lui's summit, it looked a bit daunting but the path is clear and easy enough going,,if a little UP!. Sticking close to the burn, the ascent soon got pretty boggy, still in trainers, I didn't see any need to change into the boots I was lugging around. 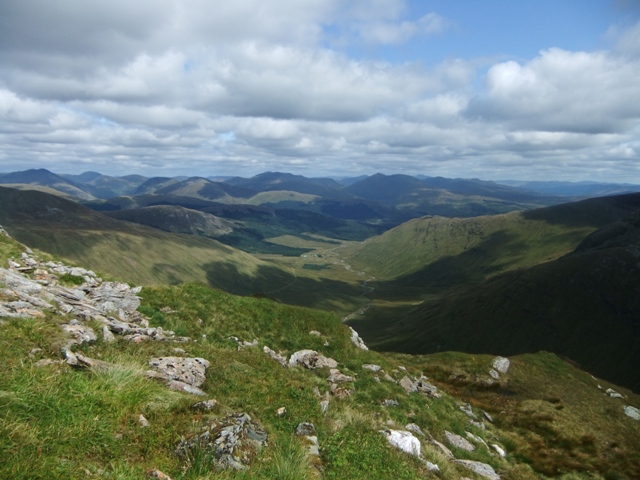 Back down to the track towards Dalrigh

I had checked BobbleHat Kennys report and soon realised that the bit about heading off towards the ridge line up to the right, had passed!,I was already over the burn and still heading up and slightly left. I checked the map and the terrain ahead. Looked like Central Gully was as good an option as any, steeper but hopefully it should get me up to the summit without taking in the distance around the shoulder.

I saw 2 blokes and a dog coming down under the crags ahead, the seemed to appear from nowhere and were making a bit of a meal of edging round the steepest part of the corry.

Reaching the edge of the gully ahead, nice false sense of security before realising it dropped away beyond for another corry. It all got a bit bleak here, very good paths but they seemed to be heading too far East/South. Rechecked the map and new I was under the summit, up to my right, straight UP to my right lol 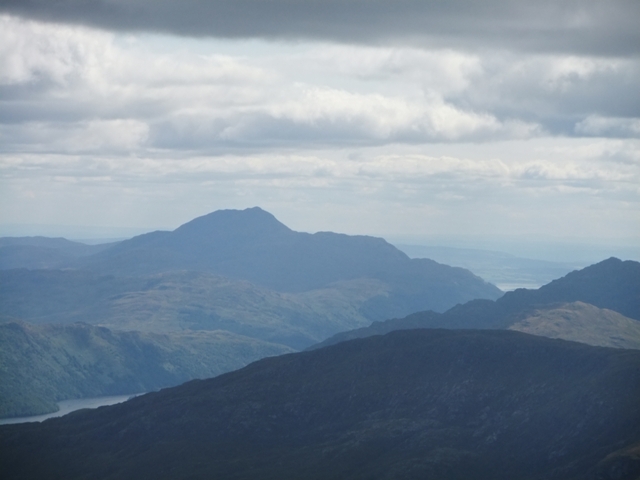 I left the path and clambered over the rocks. At one point I did think "what the heck are you doing girl, get off here and come back another day!" But whats a girl to do,, carry on, that's what. I heard then saw the blokes with the dog following me on the way round, felt like shouting "DON'T FOLLOW ME, I HAVEN'T A CLUE!!!!

With a HUGE sense of relief, I suddenly got to another lip and realised the top was about 20ft up to my right. EPIC!

Getting to the summit, there was another couple already there, 2 guys, not together and another 2 arrived shortly afterwards. A quick chat and some pics taken, turns out the guys with the dog down below were botanists on the lookout for rare plants. Most of those there had come up via the shoulder from the North and weren't sure about a path up my route,,for the last sections, there simply wasn't one lol Finally made it to the top of Lui

The couple at the top were then heading off to a'Chliebh to the West. I followed on shortly, overtaking them at the bealach, at which point I advised they would soon pass me again on the steeper ascent lol 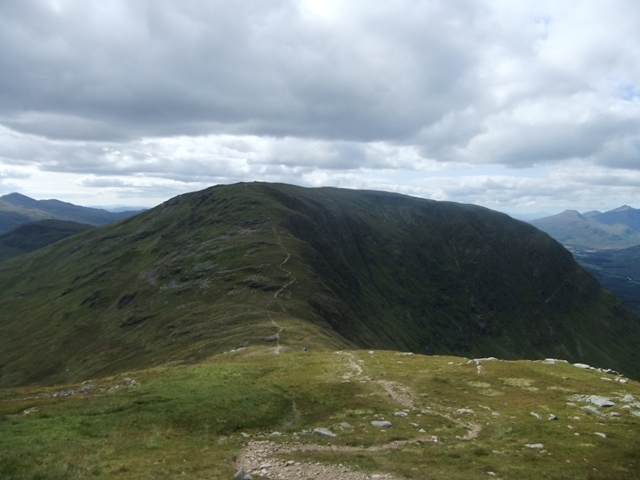 The path out to a'Chleibh

Beinn a'Chliebh is a lot further out than it looks and with daylight time still at the forefront, I wasted no time in covering the ground between as quickly as possible. Reached the top and had my pic taken by the same couple as did the honours on Lui lol 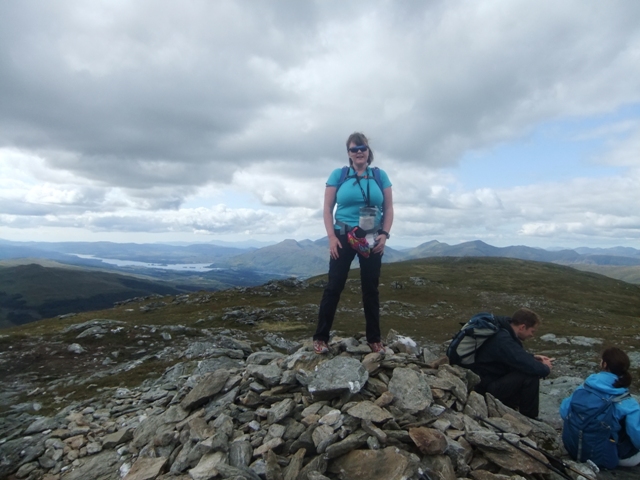 Made it to number 2

We had a further chat, they were heading off to the West while I was still in 2 minds about heading off and saving the other 2 for another day. From here, the route back towards Lui then off South towards Oss looked fairly featureless but not too challenging. Bobblehatkenny talked of this being a long section, hard on the feet with the sloping incline being tough on the ankles. I decided to just go for it. Quick goodbye to the couple and I sped off back down the path towards Lui. I'd gauged how far up I needed to go as there was no obvious path from this distance, so passing by the craggiest sections on the left, I selected a reasonable route to head round the side of Leacann Beinn Laoigh towards the shoulder Sgiath Dhubh.

Oss soon came into view and the route takes you South a bit before ascending the long shoulder then due North through the craggy bits to the top. 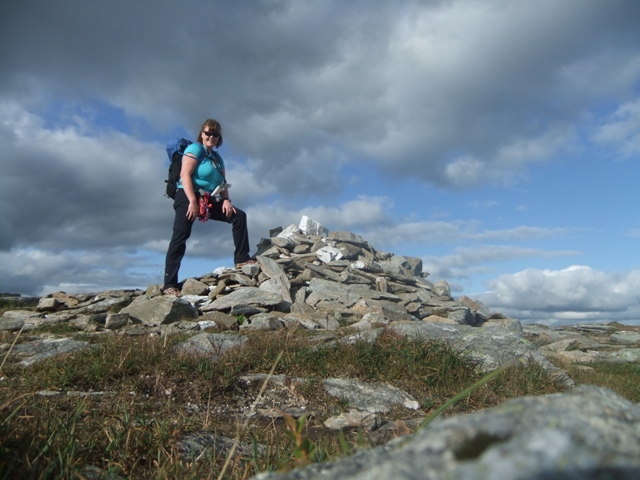 I afforded myself my first sit down of the day here as I reached the top about 20 mins before I'd estimated. It was not after 6pm, 3hrs of good light left, 1 more hill, an off piste descent and a long walk out on the track, again I considered leaving Dubhchraig for another short day. 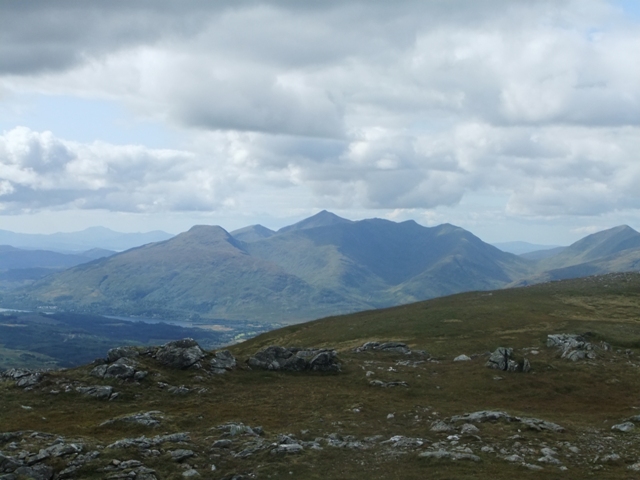 I seem to have established a knack for estimating my time / distance, based on my day on Ben More/Stob Binnean some weeks back. I reckoned Id be over on Dhubcraig just after 7pm, allowing 2hrs to get back to the car. Off I trundled again, making good time across the easy path. 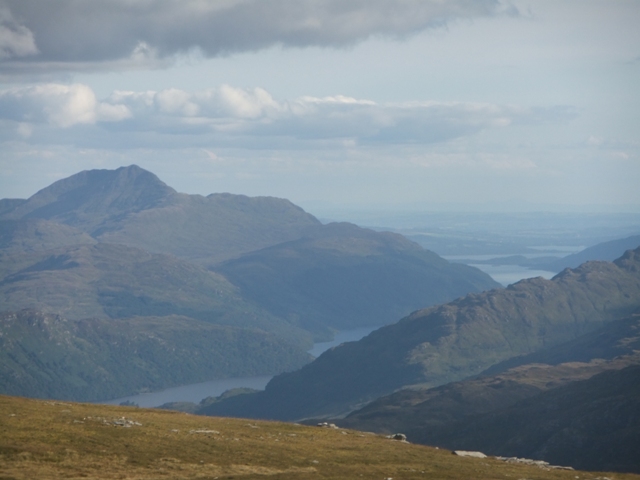 Loch Lomond and the Ben

The sun was getting low in the sky with the surrounding hills taking on a rosy glow. Views around had been great all day, Ben Lomond looking wonderful above the loch. 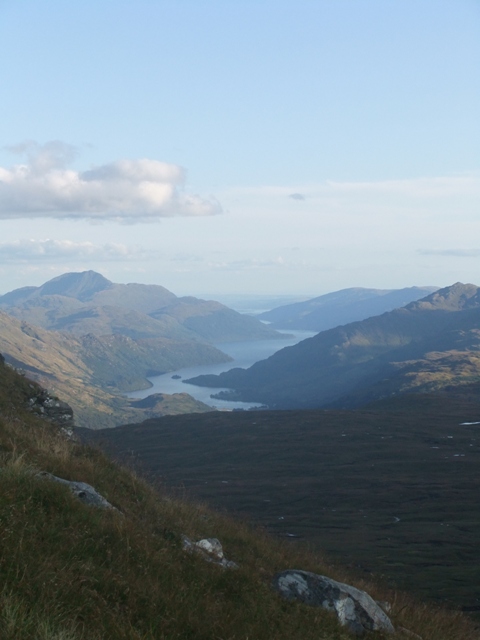 Dhubchraig was a bit rocky on top and the path appeared and disappeared but there was no problems seeing the way ahead. Finally made it to the top of my 4th Munro of the day again, about 10 mins ahead of my estimated time. Another wee sit down to enjoy the beautiful surroundings. 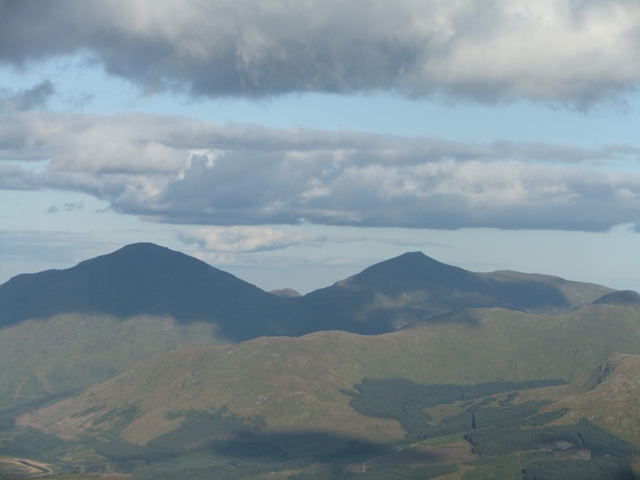 More and Stob B, I believe 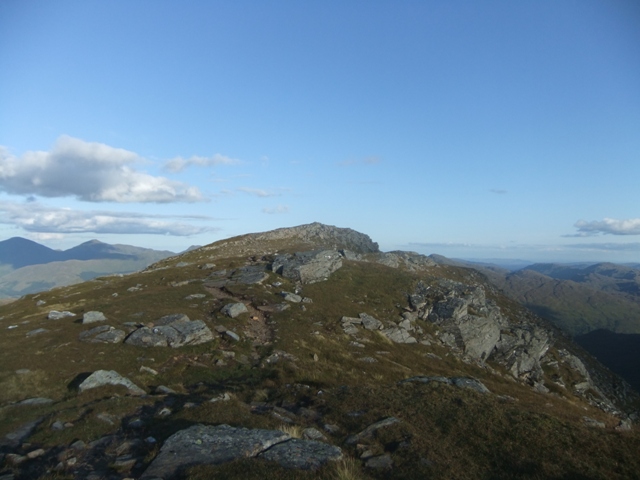 Last couple of hundred yards to the top of Dubhchraig A wistful look towards the setting sun

I decided to go with my earlier choice of heading North back down to Cononish and avoid the bogs and passing through the woods, potentially in the dark). I couldn't see the farm on the track below but could see the mine on the hillside above it and headed in that direction. There is no path whatsoever and it was pretty slippy and bumpy on the grassy descent.

As the farm came into view, I realised I was heading a bit too far West so shifted right and picked my way, slowly, down the grassy, craggy, slippy side of Dhubchraig. On the way up I had checked the map and knew there was a good shallow section on the river should I come out there,,but also that there was a footbridge a little East of the farm itself. I could see the bend in the river that the fb was on but the bridge itself was tucked under the hillside and out of sight. Over to Ben Challum, was up there a year ago this weekend 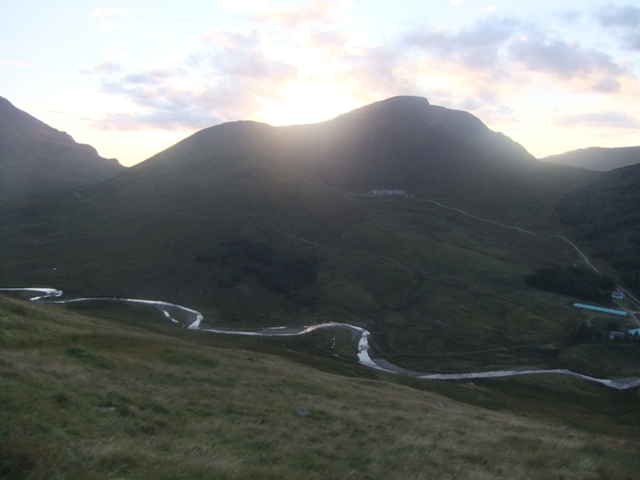 Sun disappearing over the winding river

After what seemed like an eternity, the bridge came into view, hard going this bit. 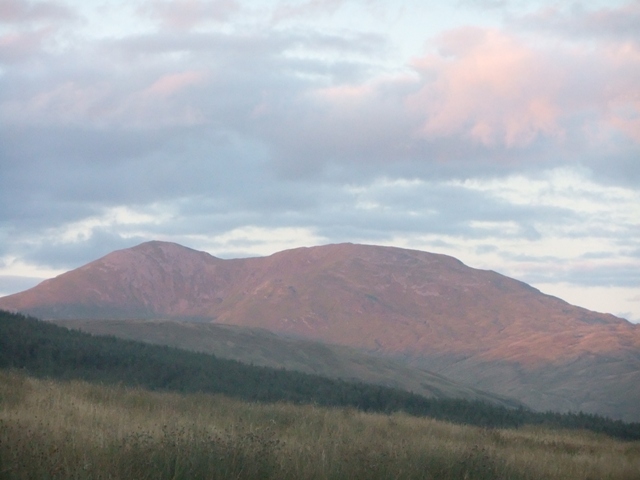 Challum with a rosy glow.

Reached the bridge after more than one tumble, tripping over poles, grass, mud, feet lol

Getting back to the track, I noticed again that the farm doesn't seem to show any signs of life, no people, animals or machinery. WIth about 45 mins of good daylight left, I headed off down the track. Made a couple of calls to let people know I was alive and scooted off.

I had been in my tshirt all day, not a breath of wind for most of it but dug out my fleece as the sun was dropping in the sky, and the temperatures would drop with it. (I only put it on about 10mins before I reached the car)

What a fab day, over 26 km, fantastic weather, 4 cracking Munros, what an achievement.(and never took the boots out the pack,,stayed in trainers all day, prob why I was able to move so quickly lol)

Really wets the appetite for these four.

It was a great weekend for the weather.

We could see your hills from Ben More 7, great day with a cracking set of colours for the sunset.
Chris

Great hike n great report too! Why not do a big hike someday?