Meall Ghaordaidh - Does what it says on the tin!

Meall Ghaordaidh - Does what it says on the tin!


Gonna be a few whistlestop reports here,,, nearly 30 hills to catch up on lol

Meall Ghaordaidh - been circling it on the radar for most of this year and had been advised it was a good one to keep for the winter months. but, getting myself and Margaret out for a days yomping in the great outdoors couldn't wait that long.

I'd just picked up a pair of Mammut Impacts from Go Outdoors in a bid to get some waterproof non winter boots and this was a good, relatively short day to try them out.

John was off doing the Ben Lui 4 as we headed off for Killin. Driving through, there were signs for a local 10k run, thankfully, we were there early enough to miss the crowds. Booting up at the start point, there was already another car in the parking area with another pulling up as we headed off. Some nice people have put a fab big sign,,pointing the way to Meall Ghaordaidh, very helpful.

Heading up through a field full of cows, lady cows, with calves, we got a bit nervy of their proximity, when the wee yins started shifting around, the mothers started eyeing us up so we moved stealthily on, avoiding eye contact. Having heard stories of cows stampeding when the calves get upset, we didn't want any trouble. As we approached the stile over the wall, a maverick cow was guarding it and only shifted a little as Margaret went over first, with me itching behind to get out the way lol

Up and over and into clear ground, sighs of relief.

At this point, I was a little disorientated, having thought Ghaordaidh was the hill we saw in front, but knowing the route veered off to the West, had a quick check of the map and realised we were looking at Meall Dhuin Croisg, a lovely craggy looking hill but, not for today. Heading to the wrong hill lol Found the right one,,,its over the back there

Passing along the track, we could see the pole mentioned in the WH route and soon came to the cairned path, turning off though, we couldn't see the pole any more...strange but still,,nice clear day, open views and the hill ahead. The path up is easily navigable and to be honest, is one of many making their way across the peaty and sometimes boggy ground. The weather was holding well, a bit breezy but clear and dry. 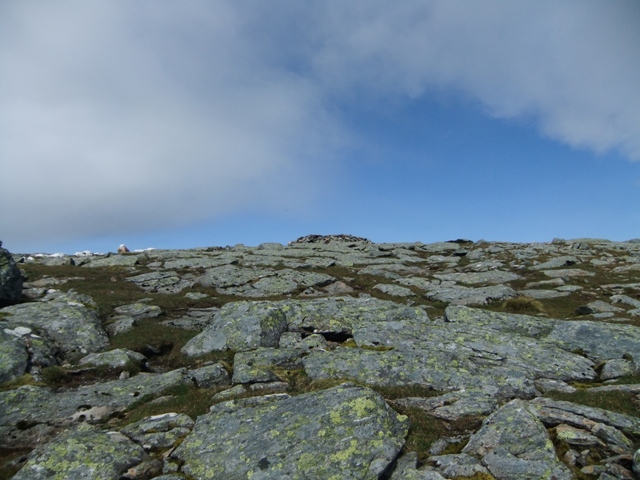 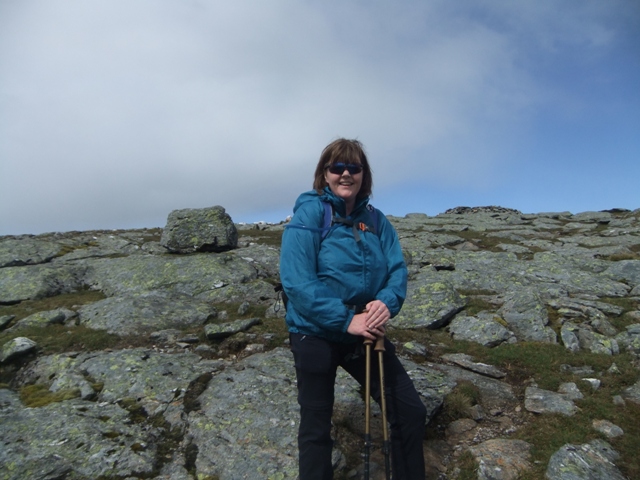 Ben Challum in the distance

The last stages were a bit rocky with some wet areas needing a bit of care to clamber over. We reached the top in around 2 and a half hours under a clear blue sky and a chilly wind. Waterproof jackets on but only for wind protection. Fab day for it The trig is surrounded by a fab stone shelter which gave us somewhere to spend half an hour enjoying a natter and some lunch in the sun. The boots had been fine on the way up but for some reason, as soon as I sat down, the balls of my feet started burning but I was enjoying the 'banter'. lol Gloves out for a chilly bit

Making our way back down, we met up and had a brief chat with 2 groups of 2 on their way up. Negotiating the slippy rocky sections was a bit harder on the way down, nothing to worry about but a bit dodgy underfoot. 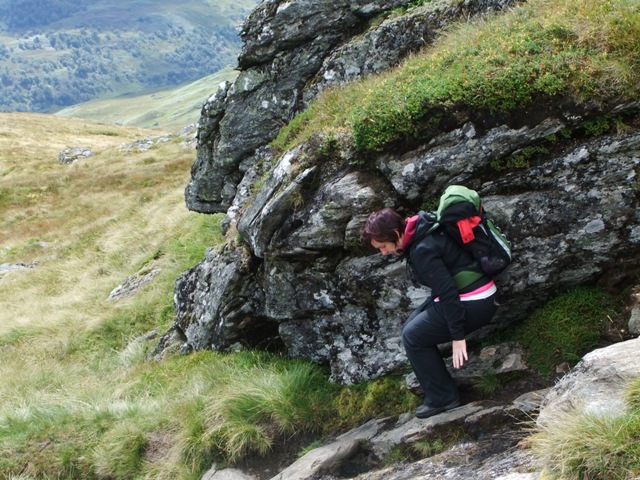 The ascent path disappears and reappears in various muddy patches and we realised we were further North than we had been on the way up, but it was still very clear, we could see the route down and just took our time. The burny feet hadn't eased any and by now were slowing me up considerably. I decided to stop at an upcoming rock to change my socks and see if that made a difference. Unfortunately, I hadn't packed spares lol but, star that she is, Margaret, had a spare set so on with them instead. This offered a bit of respite but I knew it wouldn't be long before they started hurting again. Continuing down, I got slower and slower, yes,,it is possible! Margaret , now becoming a saint in my eyes, offered to swap boots. I politely declined, once, I'm sure, but pretty soon, took up her kind offer. Now, Margaret is a 5 and a half,,my boots were a 5, a fact I didn't find out until we had already swapped,,but her wee boots were like a pair of slippers lol By the time we got down to the sheilings and the track, her wee toes were nipping and I was doing star jumps lol

We got to the track, above where we left it, we then spotted the cairned patch we SHOULD have taken on the way up......How did we miss that? (silly question, eh Margaret?) The cairn AND the pole,,how did we miss that one

Ending a good day back at the car in 4.5 hours, including a leisurely lunch we got into comfy shoes before heading off for the drive home.

Apart from the silly sore feet, this was a braw day oot with ma pal. Boots are heading back to Go Outdoors under their comfort guarantee....nippy nippy nippy!

(changed them for some Meindl Bhutans, and therein lies another tale.)

Thanks for a grand day out Margaret.

Re: Meall Ghaordaidh - Does what it says on the tin!

Looking forward to rest of the reports