Room for two or three cars just off the A82 at Glen Falloch, north of Inverarnan. No-one else there on arrival but there were two other cars on return.

Followed the winding track up the hill and past some cattle until arriving at the “T junction” beside an electricity pylon. Turned right and followed the track NW until funding as suitable point to start up the hillside.

View back to Loch Lomond

Walked past one of the wee lochans

Spotted a little ripple in the surface. Zoomed shot of this wee fellow swimming across the water to the side. Seemed to be finding it hard to land so gave him a wee helping hand before putting him back at the water’s edge and letting him decide for himself where to go next.

Onwards and upwards into the clag past an interesting rock to the summit.

Waited a wee while but it wasn’t going to clear. Headed off southwards and started to see more slightly lower down.

Beinn Damhain in the distance

The clag had cleared completely by now on the way up

Some reasonable views from the summit of Beinn Damhain 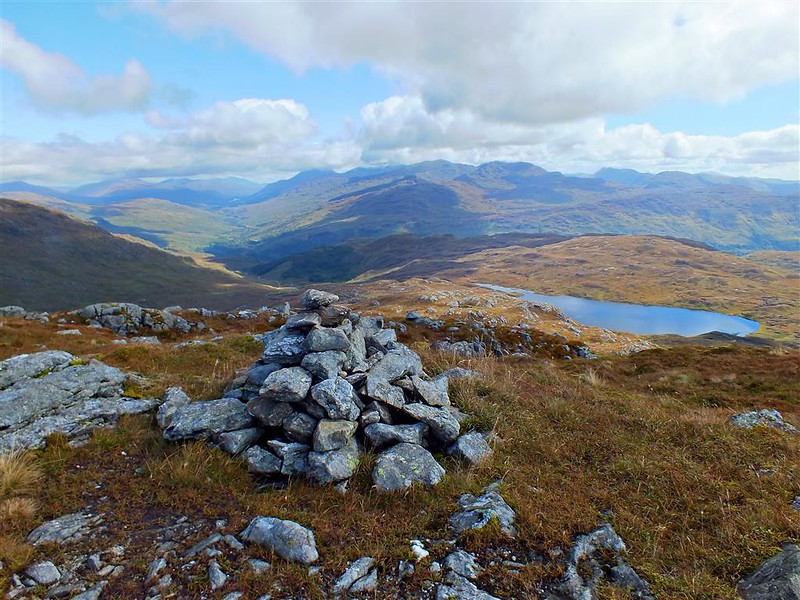 Zoomed to Ben Vorlich and co

Had lunch then set off down past Lochan Beinn Damhain then NE towards the track.

Two dodgy looking HDR pictures on the way down

Back on the track the view to Loch Lomond was clearer

Back at the car there were two others parked as well but hadn’t seen anyone else. Good to be relatively close to home with not too far to drive back.

Great report and pictures, rockhopper. You have hills in your back-yard too! It makes for a much shorter day methinks.

A couple of hills I'm not familiar with but both looked good and the photos later in to the walk are great when the weather improved.

I quite liked the dodgy HDR pictures! It’s good to see the knobbly slopes of the Loch Lomond hills again. It seems an eternity since I last was there. Great that the views improved for you!