When I finished my munros in 2006, I wasn't sure what I'd do next. Photography maybe, or more mountain biking. I didn't think I'd bother with all of the Corbetts, as some of them didn't seem that inspiring (I'd only done 30 or so at the time). After today, I'm halfway through them and I'm pretty sure I'll finish at some point. I always liked the more neglected corners of the Highlands anyway, and the Corbetts and various other lumps and bumps have that in spades.

our_route.gpx Open full screen  NB: Walkhighlands is not responsible for the accuracy of gpx files in users posts
Part of my aim for today was to do at least two Corbetts, as this would take me over the halfway mark (slightly ambiguous as the list has recently changed, and the version on Walkhighlands has an extra summit). I was going to go over to Tomintoul, but the weather looked better to the W, so I went down to Invergarry instead. Despite showers and low cloud down the side of Loch Ness, the weather at the roadhead at Mandally was looking quite reasonable. The 6 miles or so to the stalker's path I wanted passed fairly uneventfully on the bike (pleasant, but you don't see much of Loch Garry), the track being well maintained. Forestry operations at the W end of the track meant I couldn't follow the path I wanted, so I had to use the other one. Luckily I expected the path to be faint, otherwise I would never have spotted it. It was quite clear that very few people used this route, and it was only just followable. This sort of thing is usually a disaster for me, as I don't tend to look at the map much, but I managed not to get lost in the woods!

I crossed a rough area of heather and bog (and a deer fence) to pick the other stalkers path up. Once on the hill, this path was a typical devious route onto high ground, which was barely used but not in bad condition. This took me over Meall Doir' an Daimh and Meall Tarsuinn, with views opening up to Loch Quoich, Loch Garry and Loch Ness. Ben Nevis from near summit of Geal Charn

A bit of contouring took me to the final ascent of Geal Charn, which had magnificent views straight down Loch Arkaig to Gulvain and Sgurr na Ciche, and also straight across to Ben Nevis the Anoachs and the Grey Corries. Ben Nevis still had a very white NE face, but there was barely any snow at all in Knoydart. ...and again, with Glas Bhein in foreground

I sat for 15 minutes up here, but there was still a nip in the air so I had to carry on. Passed another guy, who had started at Eas Chia-aig waterfalls near Loch Arkaig, probably the best place to do this walk from (I'd chosen Invergarry as my starting point as it was closer to Inverness). I crossed over Meall Coire nan Saobhaidh and onto Meall na h-Eilde, passing a second guy on the final steepening to the summit. Busy day!

The snow that had been on these hills in the morning had all but melted by this point, the difference being particuarly noticable on BenTee. Views W were inferior, but Ben Nevis looked just as good and the Kilfinnan Munros (Meall na Teanga and Sron a Choire Ghairbhe) looked interesting from this strange angle. 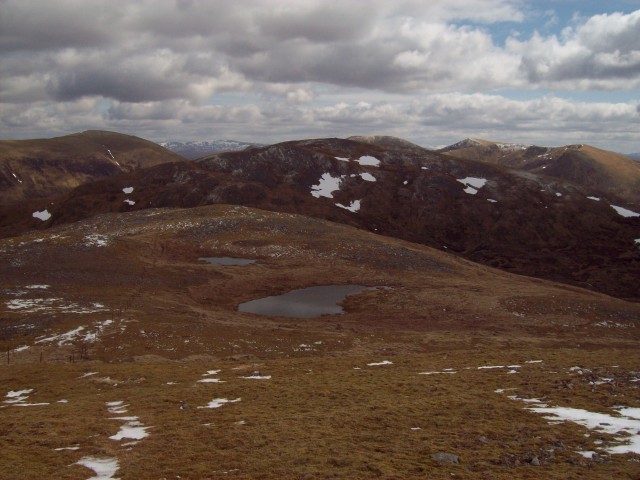 Looking back to Geal Charn, with Sgurr na Ciche prominent in background Another bite to eat, and I headed down the N ridge. Nice walking high up, degenerating into bog lower down. Picked up the path in the corrie which led me back to the route I'd started out on. One thing I'd spotted on the ridge down (and in a couple of other places on the N side of the hill) was a post full of nails at various heights. Anyone know what these were? Passed a few more people on the track backto Mandally. Busiest Scottish hills I've been on in ages!

Great report Malky,
Some excellent photos there, the views over to spidean Miallach and the rest of the hills around Loch Quoich bring back good memories

Nice report. You didn't fancy Meall an Tagraidh too? It looks like a mini Buachaille from the Allt Cam Bhealaich!

Cheers for the comments.

monty wrote:Great report Malky,
Some excellent photos there, the views over to spidean Miallach and the rest of the hills around Loch Quoich bring back good memories

Loch Quoich area looked good. At one point was kicking myself for not going down to do Sgurr nan Eugallt instead, but it isn't going anywhere.

Funny thing - When bagging Munros, I was convinced that I was fairly varied and did lots of other hills. I was quite surprised when I counted up and realised how few Corbetts I'd done. They don't seem so daunting now though - I didn't even make a conscious decision to do many more of them - it just sort of happened!

benno wrote:Nice report. You didn't fancy Meall an Tagraidh too? It looks like a mini Buachaille from the Allt Cam Bhealaich!

Bit off my route, although it was probably the most interesting looking summit of the bunch. I would have definitely included it if I had been approaching from the South though.

Really don't know what the post is! Unless some caring keeper has put a scratching post up for the deer!

Laugh not, I knew a very good and caring dairy farmer who put yard brushes attached to the side of the stalls for when his cows were indoors. There was one which they could scratch the top of their back on and one to do their sides.

Been looking at Ben Tee for quite a while now... your pics make me really want to get out there and do it!

Hi - I was the second guy you passed on the way up Meall na h-Eilde on 3rd May, I was going the other way round. Geal Charn is an undistinguished hill but at least the descent on soft grass was comfortable. What wasn't so pleasant was the final 3km back along the Arkaig road. No risk of being run over but no chance of a lift. The anti-clockwise round took me 7 hours for 19km, but you were certainly going faster! My excuse is age and 2 preceding hard days on the Ardgour Corbetts.

Ben Tee always reminds me of the passage in Hamish's Mountain Walk along the lines of "when one has climbed Tee rather than drinking it!", referring to the ribbing he got from his kids for not climbing on the hill on account of being ill

A great area for hillwalking but murder to get to from Edinburgh (or so I think) - I'd rather drive to John O'Groats than some of the western hills.

bogtrotter wrote:Hi - I was the second guy you passed on the way up Meall na h-Eilde on 3rd May, I was going the other way round.

Hi! Was wondering how long it would be before I met another forum user on the hills. I can imagine these hills wouldn't seem that exciting compared to Ardgour, but they are certainly easier going, that's for sure...

MC/LS - Ben Tee is definitely worth the effort. I think you would make a good round if you went up Sron a Choire Ghairbh as well - a nice little horseshoe. I remember the long drives over from the East Coast (Dundee) too...made me move a bit closer. A82 is still a minor dislike for me though, even from the Inverness end.