Beinn Liath Mhor and Sgorr Ruadh: Jewels in the Coulin

Beinn Liath Mhor and Sgorr Ruadh: Jewels in the Coulin


I did this walk with Sandra. We'd only walked once together as part of a guided walk but I knew this would be a good partnership. The forecast was reasonably optimistic albeit unseasonable - cold, some showers but also the promise of clear spells and clear summits. As it was raining heavily early in the morning, we set off from the car at around 9.25. I was really looking forward to these hills. For some reason, until June I didn't know very much about them. They can't really be seen from the road because they are fairly remote and hidden by the forest and the steep slopes which overlook the road. However from the other side of the road, they looked truly imposing and beguiling, hidden jewels which called for closer exploration.

We took the very detailed walkhighlands description for the section just beyond the railway crossing to the cairn which signals the start of the ascent proper. We reached the start of the ascent in about an hour in kind weather conditions, through lovely woodlands, up a zigzagging path which leads into the Corrie Lair, a lost, secluded glen from which the horseshoe of Beinn Liath Mhor and Sgorr Ruadh rises.

As we prepared the walk up the southern spur of Beinn Liath Mhor, the weather changed quite drastically and we got caught up in squally spells. The hill, which at first had been visible, disappeared completely. However as we were about to continue, the clouds parted to reveal the ridge path, the quartzite scree and the views over to the Torridon hills. The parting of the clouds also revealed the hills to the north - all grey and glistening, like wet sand dunes. Absolutely superb. As we reached the second top, the ridge became more complex, the clouds playing the usual tricks with distance and size. The rest of the walk, to the true summit, took a good 25 minutes. We reached the summit ridge in the clouds and the wind was fairly strong and biting. We sought shelter on the lee side of the large cairn to have lunch and as we were readying ourselves to get on with the rest of the walk, the clouds parted once again, revealing the downward path.

We took a bearing anyway and, in improving weather we headed for the first section of the bealach and the first lochan. We found no difficulty until later. We went over the bump which splits the bealach Coire Lair into two and found the section of descent which descriptions had warned us might need some minor scrambling. It was very minor (compared to the scrambling up to Cheesecake) but exhilarating and satisfying nonetheless. This was a strange configuration, the bump being much more substantial and, once again, complex than anything that could be read off the map and in distance also much bigger. By the time we got to the second lochan which lies at the foot of the ascent to Sgorr Ruadh, the weather appeared to turn squally again. We met two met, a father and son, dressed in barbour jackets, and clearly immune to the cold and wind! We took the long distance path for a metre or two and I noticed the path which leads up to Sgorr Ruadh on the left, marked by a pile of stones. So we headed up to a small shelf from which we admired views over Maol Chean-Dearg (which I climbed exactly a year ago), shed a layer and put on sun glasses and headed up to the second Munro.

This was a fairly swift ascent despite the unsteady slabs/rocks and once more satisfying. We soon reached the summit, had more sustenance and then we discussed the way down. We headed down towards the fairly large Loch a'Bhealaich Mhoir, keeping it to our left and I knew that what on the map was marked as fairly flat terrain was going to be more complex (once again) on the ground as it were. Sure enough, this 'flat' terrain was also punctuated by a series of small lochans and small knolls which made the way to the stalker's path marked on the map more convoluted. We chose to walk south but in a leftward slant, keeping the northern corrie of Fuar Tholl well ahead of us, but at the same time seeking to avoid unnecessary re-ascent over the more dominant knoll. This proved a good decision and eventually we reached the stalkers' path. By then the weather had cleared. The views of the Fuar Tholl were magnificent. The Corbett is both imposing and gorgeous looking. I'll have to come back to climb it. I'd love to see Coire Lair again anyway.

We passed 8 red deer. It was warm and we were also glad we hadn't had to take the alternative route down to catch the River Lair further upstream as this seemed very steep and unsteady. The path was straightforward and the views into the Coire absolutely amazing. We realised fully at this point how far we had walked. We reached the Lair and looked for a good way to ford it. We chose to cross at the small island in the river and the first crossing was really easy. The second one less so and we got wet feet. It took us about an hour to return to the car and the walk through the forest was pleasant. We saw some greenish birds flying through the grass which I think were warblers. 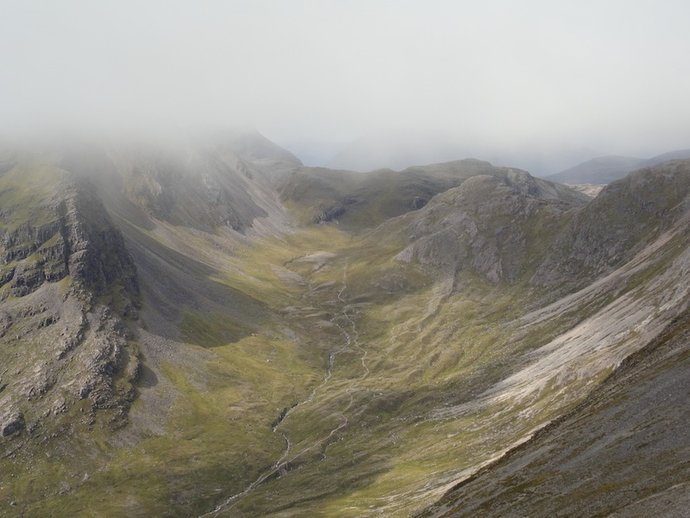 Beinn Eighe in the background, a wet dune in the foreground! 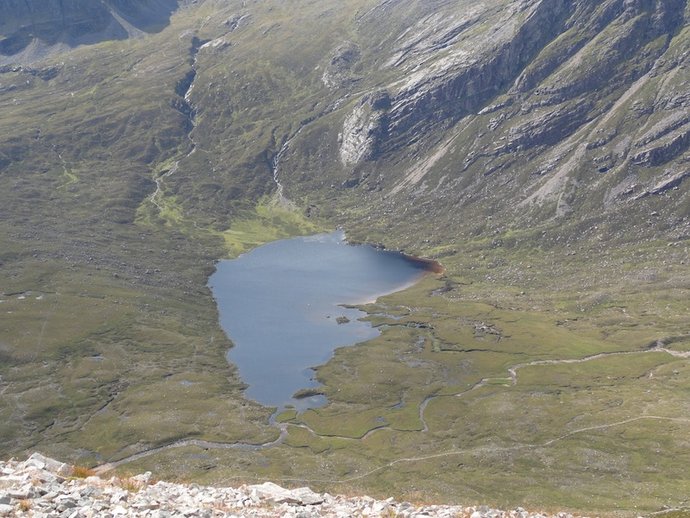 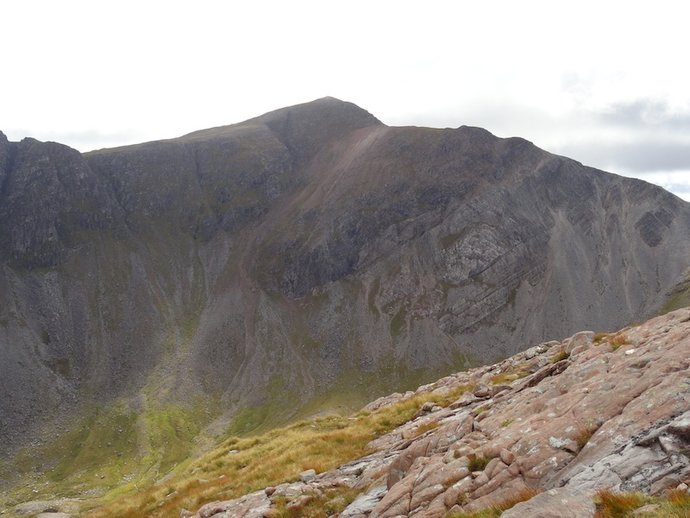 A wee bit of scrambling Last look at the lost valley

Re: Beinn Liath Mhor and Sgorr Ruadh: Jewels in the Coulin

Nice one., bit of a classic, glad you got reasonable weather and views. Like you I must save Fuar Tholl for a clear day, looks wonderful