Quinag (traversed from the North)

Quinag (traversed from the North)


Having stayed at Inchnadamph in August 2013 and admired Quinag, while doing other hills in the area, it had been considered for the trip in June of this year but binned, again in favour of other adventures. I was really looking forward to our planned North-South traverse of the mighty Quinag, an exciting prospect on paper and it proved to be an outstanding day on the hill...thanks, Craig

our_route.gpx Open full screen  NB: Walkhighlands is not responsible for the accuracy of gpx files in users posts
Awoke to no ill effects from the previous day’s traverse of Breabag, perfect, clear weather conditions greeted us as we set-off along the road from the hostel, to be dropped off at the Allt Ghamnha on the Drumbeg road. After crossing to the west side of the Allt Ghamhna it’s a stiff walk through bracken and birch trees before continuing on a relatively pathless traverse above the waterfall across heathery moorland, where the twin peaks of Sail Gorm and Sail Garbh loom into view, piquing the anticipation and, yes, excitement... 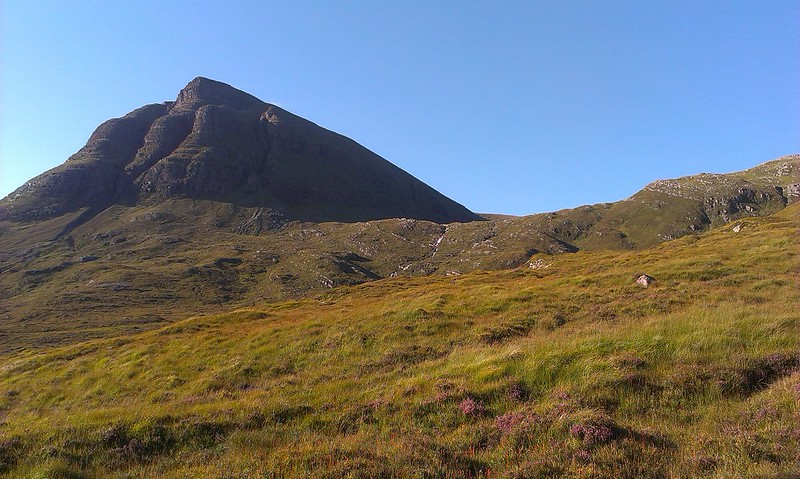 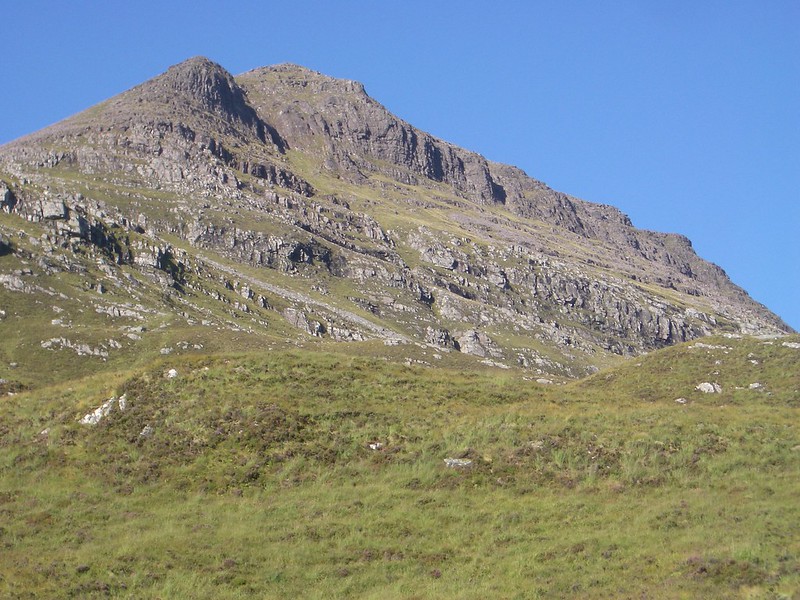 Had a brief stop here to top-up fluids from the Allt (a'Bhathaich) and to brush off two or three stowaways picked up from the undergrowth along the way (a hazard of walking in shorts). Moving well and making good time, we reached the foot of Sail Gorm’s eastern ridge and stopped for breakfast. As we fuelled-up, we watched a pair of red deer show us the way to the summit. 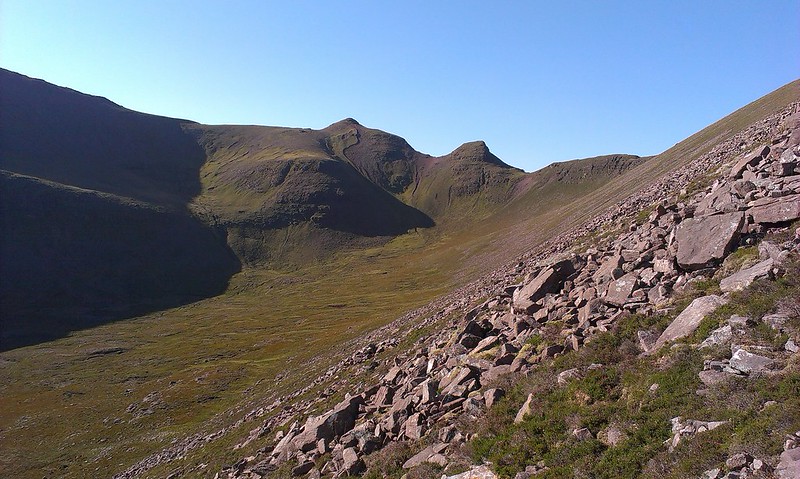 The adventure continued as we ascended this flank towards the summit, emerging above the nose and beneath the summit of Sail Gorm. The views on the way up and from this vantage point were pretty special...

(particularly to the North & West)... 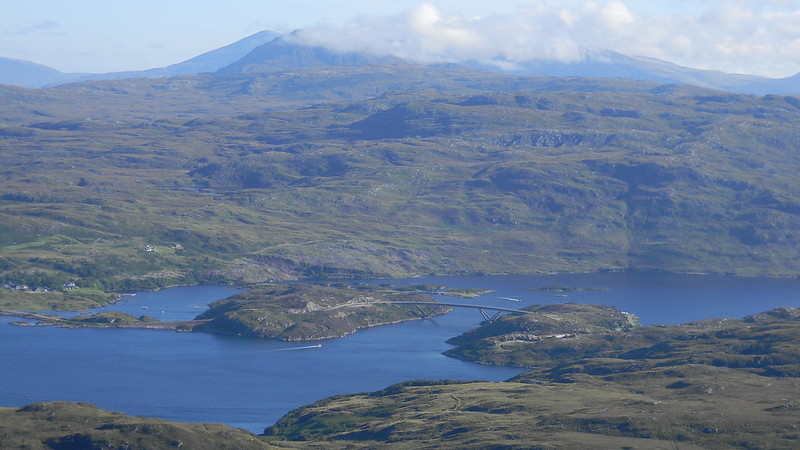 ...and bettered only by, as is the norm around these parts, those from the summit itself on a clear day such as this. 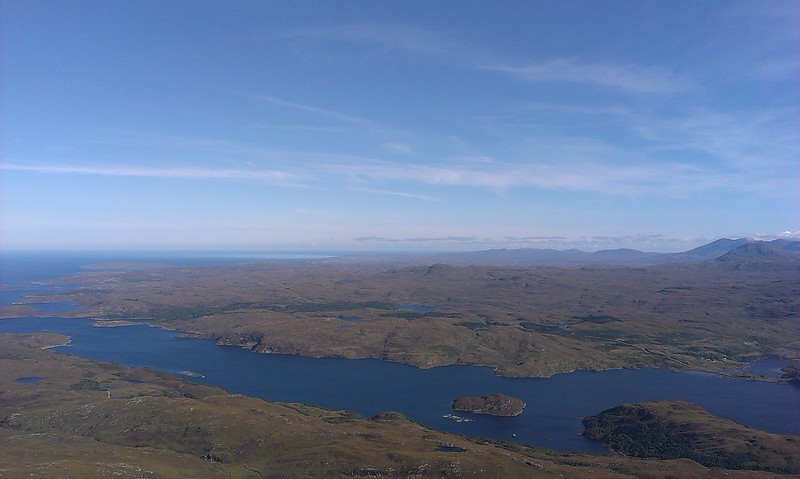 The sad part is not having the skill to covert what the eye sees into a decent photograph.

With Sail Gorm achieved, it’s a fabulous high level traverse of the spine of the mountain from here that leads us to the spot where we nip out and back to Sail Garbh so, off we tread towards Bhathaich Cuinneige... 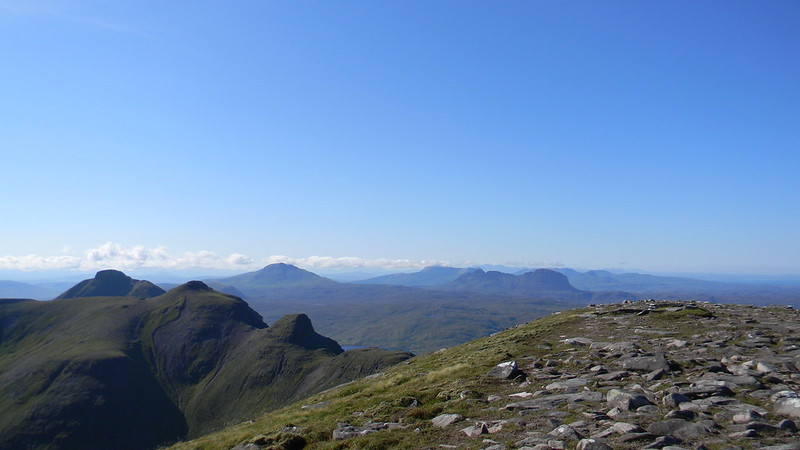 ...anyone else notice the resemblance to a rhino’s head?

No, just me then…

There’s some fun to be had along the way to the highest of the three Corbetts, where a couple of deep chasms off to the South are passed 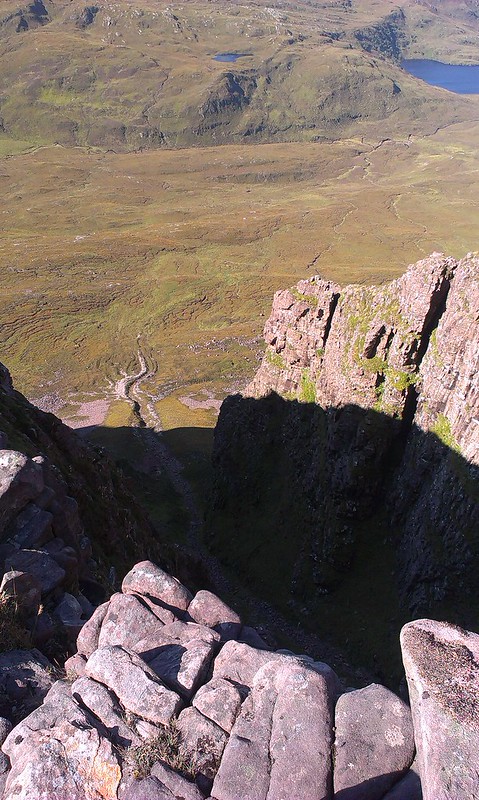 and a couple of significant bumps to negotiate, choosing to go over the top of the first and bypassing the second, though we returned here on the way off. There’d been a stiffish breeze since reaching Sail Gorm but, it was an eerily, though not unwelcome, windless Sail Garbh that greeted us. We’d left the bags in the col below Sail Garbh and there was a spring in the step as we approached the summit. 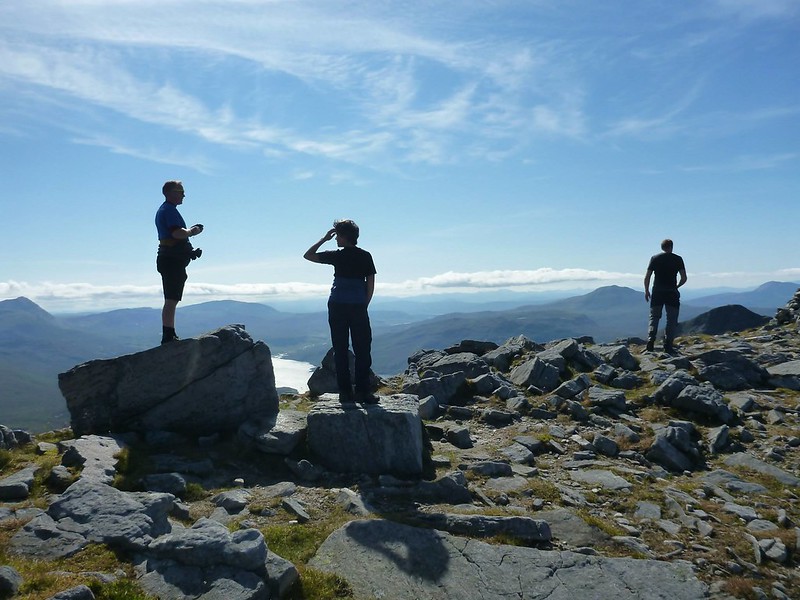 We stopped for lunch on returning to the packs, marveling at a large group, who’d come up from the South at Loch Assynt, ascending the 745m top, and proceeding on to Spidean Choinich. 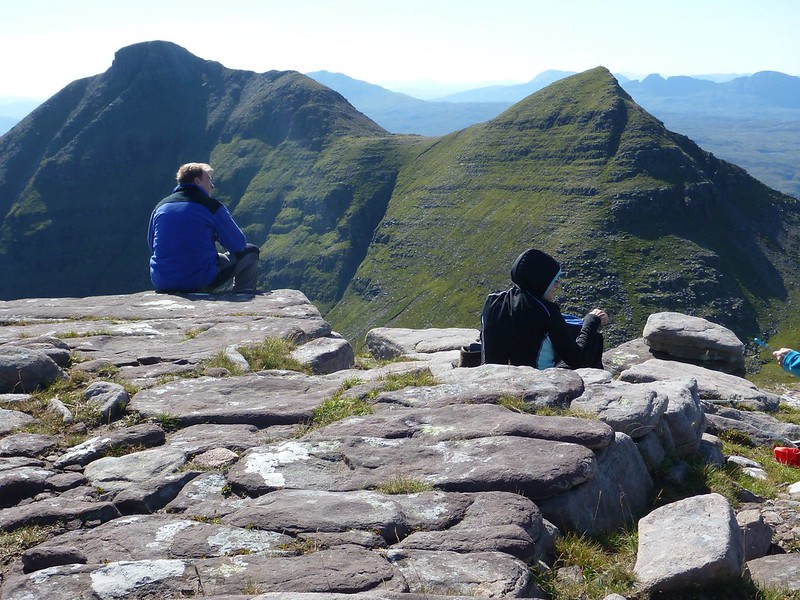 They appeared to be taking some time and we wondered if they were in difficulty but, they did seem to be okay once the top had been gained and were moving more freely towards SC.

Returning via the summit of the 713m top we’d bypassed on the way out, 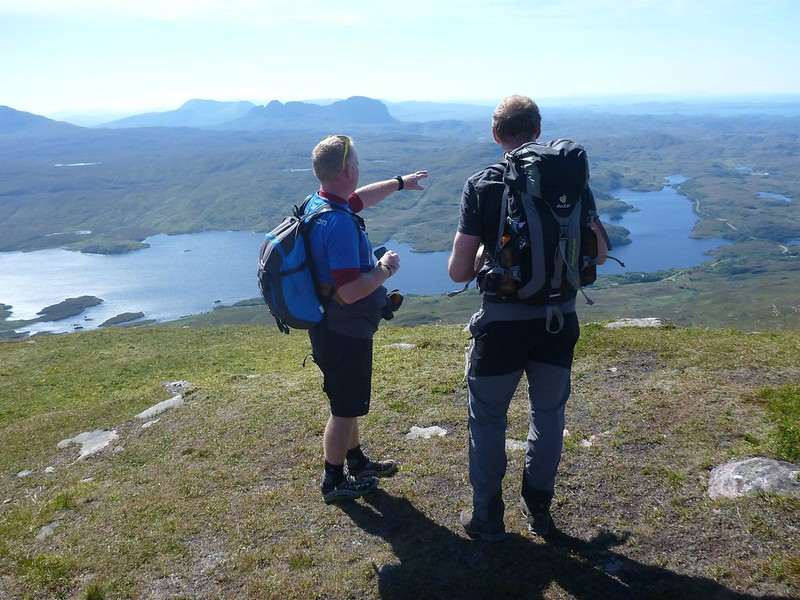 we made our way down to the base of the 745m top, this was yet another really enjoyable section, with the occasional hand on so great fun (this section reminded me a little of An Stuc in the Lawers range and, the fact I was unphased by it says it all about how far I've come since a hairy descent of AS a couple of years back). 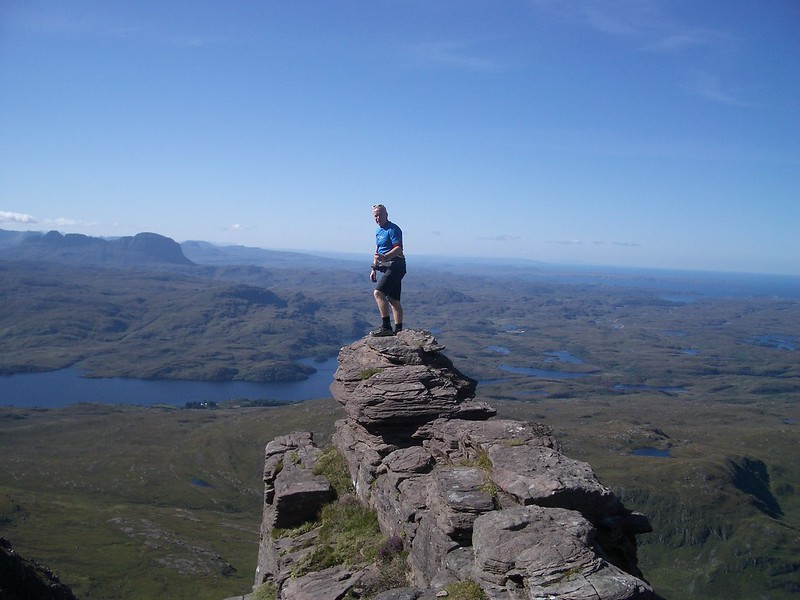 All too soon, we’re emerging on to the summit of Spidean Coinich, which is busy for a Tuesday. The large group we'd watched from Sail Garbh are still up here soaking it all in and a well-equipped, young family are cooking lunch. We sit here for a bit, having a bite to eat and marveling at the views, preparing for the descent…and the road march back to Inchnadamph. 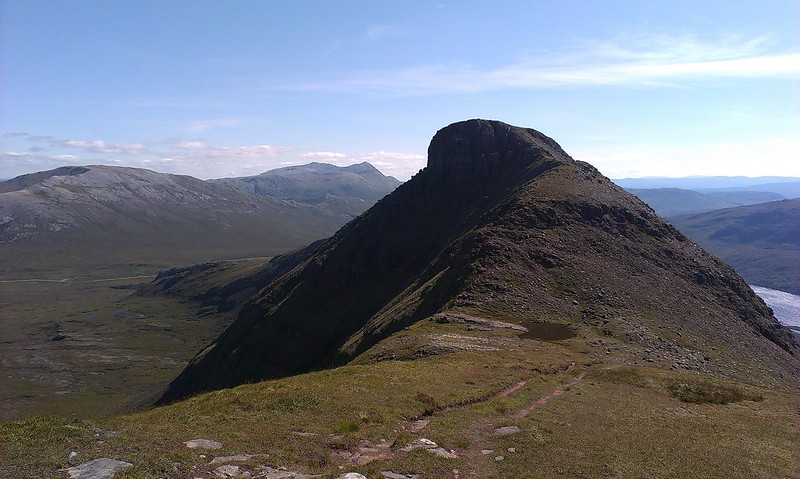 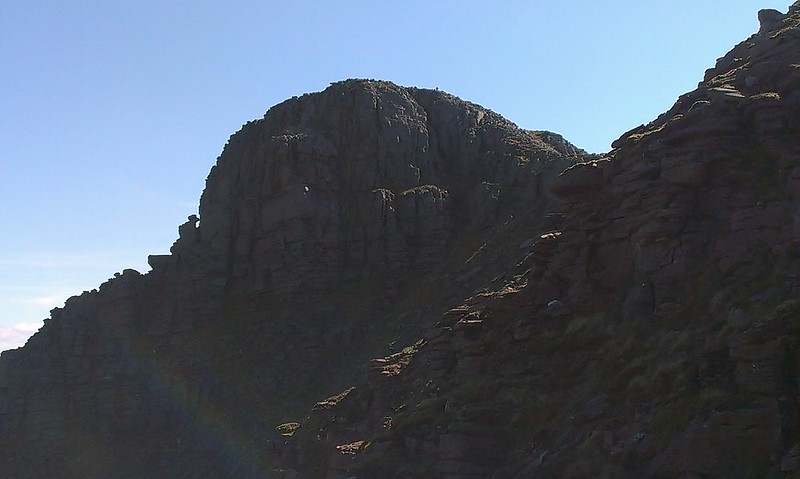 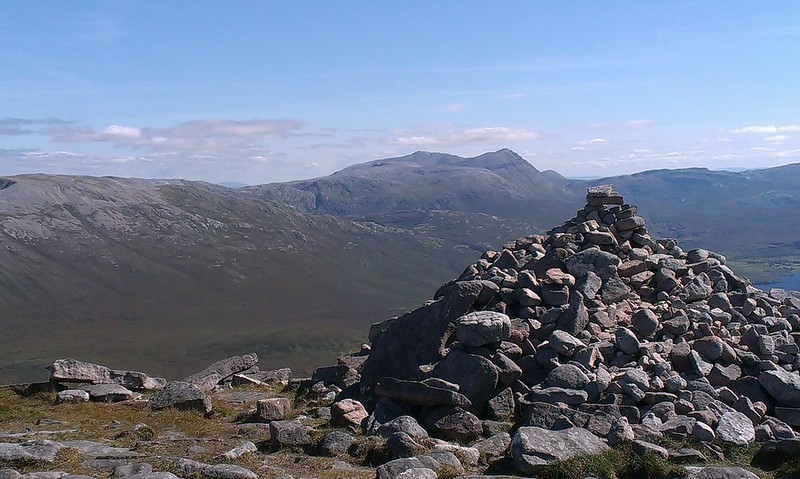 As many of you will know, the angle of the hillside off of SC down to the road junction beside Loch Assynt is a kind one and it’s easy walking until you reach the boggier and more tussocky lower reaches. 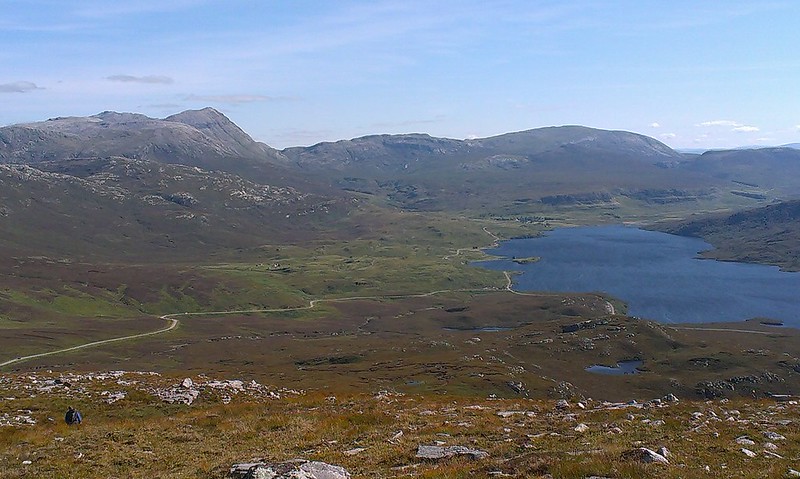 It’s a wrench to begin the descent but, we do and head for the Allt Sgiathaig, with the aim of walking back along the road to hostel however, we were saved this ?km road march when a minibus of Dutch tourists, who turned out to be the large group we’d seen atop SC, stopped and offered us a lift. They were staying at the Inchnadamph hotel and they were only too happy to drop us off…and we were only too pleased to accept!

Back in time to enjoy a beer out back at the hostel, with Quinag holding court, before a freshen-up, an earlier than expected tea and enough time to join our new Dutch friends over at the hotel for a pint and a few games of pool.

This was a fantastic way of doing Quinag, in fine weather, and has rocketed into my Top 5, albeit limited, hiking experiences to date. 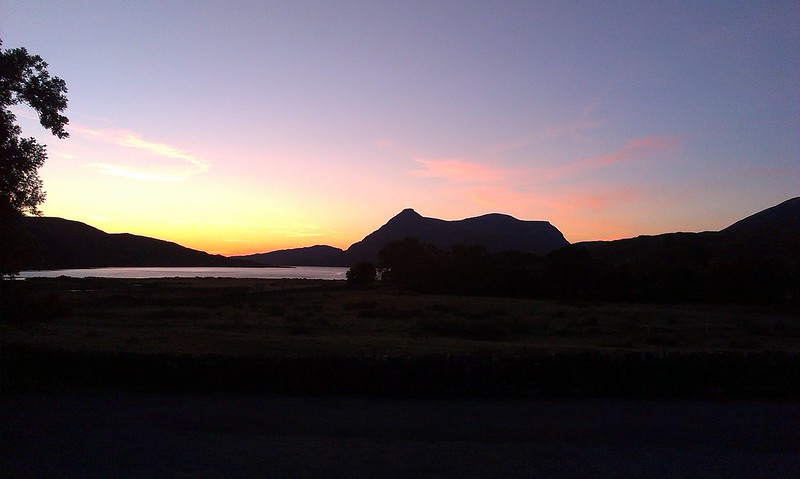 Interesting route, good pictures and definitely a rhino in there!

Well done... went up there in May with some awful weather and turned back.

Some beautiful shots you got.... good shout on the Rhino head. Never noticed it through the murk.

Cracking effort , BV and some outstanding photos. Certainly whetted my appetite for when I am up that way next year and will attempt to the same route.

Fabulous, must try that route!

Silverhill wrote:Fabulous, must try that route!

Avocetboy wrote:Cracking effort , BV and some outstanding photos. Certainly whetted my appetite for when I am up that way next year and will attempt to the same route.

Just had a thought, AB, if you are staying at Drumbeg, you could try walking the road from your digs and approaching from Sail Gorm's western flank. Equally rewarding, I'd imagine and slightly less steep?!

larry groo wrote:Well done... went up there in May with some awful weather and turned back.

Some beautiful shots you got.... good shout on the Rhino head. Never noticed it through the murk.

Cheers, larry-g, hope you have better luck next time. Have had more than my fair share of bad days so, was overdue a good one.

litljortindan wrote:Interesting route, good pictures and definitely a rhino in there!

Thanks a lot, litljortindan, not going mad then

Cheers, malky. Can't take the credit for the idea but, highly recommend the route.