In October of last year I climbed my first munro, Beinn Ghlas, quickly followed by Ben Lawers and An Stuc that same day. And it was safe to say I was hooked. The Carn Mairg group, Ben Ledi, the Cobbler, Beinn a'Ghlo and Ben Lomond have since been conquered with the feeling of wilderness, the challenge and expansive panoramas simply intoxicating. So now to our greatest challenge yet, the South Glen Shiel Ridge. Me and my dad camped the night before and woke to sunshine, a promising start to what would be an epic day. Getting underway at 7:30, we reached the first summit by half 10, with thick mist having covered the top of Creag a Mhaim, so much for that sun! After a quick snack we pushed on with little difficulty reaching the second peak of Druim Shionnach, with the cloud beginning to rise and spirits high. With that it was on to Aonach air Chrith, traversing the fine ridge with views opening up in all directions. After a sharp rise and some hard work we reached the summit at 1024 metres, the highest point on our walk. Descending from the craggy peak, a certain amount of bum shuffling was done to negotiate the steep and rocky sections with some sheer cliffs to our right and left dropping many hundreds of feet below. This was negotiated with little fuss and we were soon on our way to munro number 4.

The cloud had all but cleared by now and expansive views surrounded us as we tackled the ascent of Maol Chinn-dearg. Another relatively steep rise but the summit was gained shortly after half 1 and a sheltered spot was found for lunch. I can safely say a ham sandwich has never been so satisfying! We reluctantly rose from our well earned seat to move on, with the slight breeze now picking up as Sgurr an Doire Lethain was tackled. The legs were starting to tire now but the mind was too preoccupied with the panorama's on either side, mountains and lochs as far as the eye could see. At the top the wind was now whipping across the summit and the clouds could be seen racing across the sky. However the view across to Sgurr an Lochain and its formidable cliffs and crags was stunning, the most distinctive mountain of the ridge.

Descending was now a great struggle as the knees began to feel the trials peaks past and the constant pounding began to take its toll. We were soon on our way up Sgurr an Lochain and the summit was reached after what was the most exciting and enjoyable ascent of the day. We stopped at the top, fuelling ourselves for the final assault on Creag nan Damh, the final mountain of the day. Descending to the lowest point in the ridge we prepared our weary limbs for the final effort. Pushing on up the rocky slopes, the summit was in sight, giving us the shot of energy needed to push us over the finish line. We had made it to the finish and a grand terminus to a fine ridge with views over to Skye, up to Ben Nevis and over the wild land of Knoydart and Kintail perfectly framed in the evening sun. And the most satisfying sight of all, looking back over the South Glen Shiel Ridge and the other 6 mountains conquered. Now how to get down?

I am afraid we slightly missed the path here and with the weather closing in, found ourselves decending a steep slippery slope, our weary knees taking an almighty pounding and puddles forming in our boots. The rain began and was soon coming down in sheets as we tackled the ever more treacherous route with a rather unnerving drop into a ravine to our left. Mercifully we caught sight of a path and reached it before long. Only a forest stood between us and the road now but the mud and bog made for slow progress, caking our soaked shoes. After picking our way down the impossibly steep section littered with fallen debris, we reached the road, the warmth of the car awaiting our cold and tired bodies at 8pm. Who said going up was the hard part?

So what a great day, undoubtedly the hardest in my short hillwalking career but a remarkable experience which fostered not only wonder but respect for these great mountains, which can give you so much but present many dangers. But this has only fuelled the fire within to tackle further challenges! 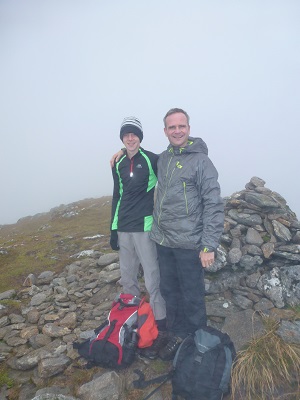 Re: Sunshine on Shiel

Looks like a tough but satisfying trip. Well done!

Re: Sunshine on Shiel