Had been looking at these hills for a couple of years now (online that is, not actually standing looking at them...that would be stupid!), but the chance to get them done never seemed to arise, even though they're quite close by.
I'd been speaking to a guy at work (Ian) who I knew was a keen walker, and he said he fancied doing them (again!) and asked me to join him, I didn't need asking twice!
We arrived at the turning point at the end of the Selkirk to Ettrick road, and parked up, the forecast was for low cloud in the morning, clearing early afternoon, turning bright about 4pm. Right enough, we couldn't see any hills really when we set off but we remained optimistic re the cracking views that Ian had the last time he was here, so we headed through the gate and onto the forestry track that would take us up Bodesbeck Law. It's a fairly steep(ish) climb along the track 'till it reaches the open hillside, where the track soon ends. From here we followed the faint quad bike track to the drystane dyke and fence, which we clambered over, and reached the summit of our first hill of the day. The parking area at the start of the walk. Views were nil, so we didn't hang about and followed the border dyke, on the Dumfries & Galloway side, along a faint path/sheep track down to the col, and then up to Fauldside Hill, continuing on to White Shank and then Smidhope Hill, where we stopped for a bite to eat. The clag still obscured the surrounding countryside, so with (still) no views to enjoy we were soon on our way again, soon reaching Capel Fell...still no views! 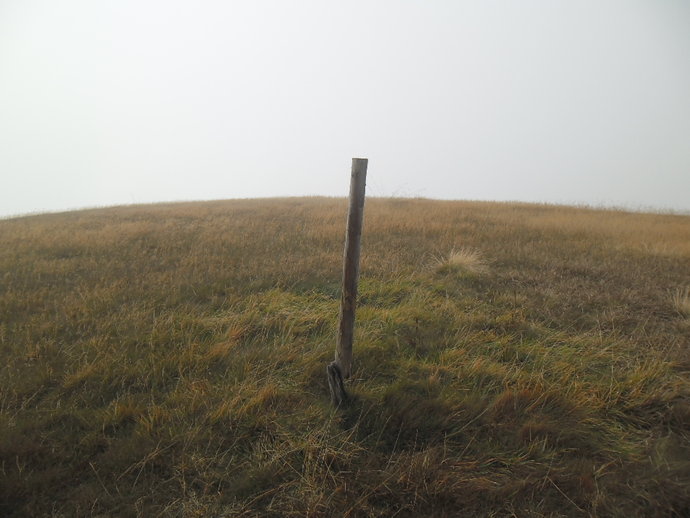 On the descent to Ettrick Head and the Southern Upland Way, the cloud did start to thin and we caught the odd glimpse of the hills around us, we stopped for a few minutes as the sun gradually broke through, eventually giving us views across to Loch Fell and Croft Head. They looked quite inviting but they'd keep for another day, so we continued our descent. The peat hags at the bottom looked quite bad, especially on the D&G side, so we crossed into the Borders and made our way over them on that side...no problem! It's quite a steep climb up Wind Fell from this point, we did consider swinging round towards Windfell Nick and following the less steep slope up from there, but decided to give our thighs a bit of a workout, and followed the fence up to Wind Fell summit and its broken wooden stump! Croft Head in the clearing clag. Wind Fell, looked quite steep...it was! The stile on the Southern Upland Way from Dumfries & Galloway to The Borders...and vice versa obviously! Ian, having crossed the peat hags. The summit stump on Wind Fell.

After that thigh straining ascent we needed some refuelling, and found a sheltered spot just up from Little Nick, and had another quick (2nd) lunch. From this spot the climb up Ettrick Pen looked pretty severe, but once on the path, it wasn't too bad, and we soon reached the large summit cairn. Leaving the summit, we followed the fence to the NW for a wee bit and then headed west down the fairly steep slope, following (yet another!) faint path, soon reaching the end (or start, depending how you look at it!) of the forestry track which led us down to Over Phawhope bothy and back to the car. The bothy looked quite cosy and well maintained, it would certainly be a welcome sight in poor weather. The track back to the car. Potburn Farm, derelict and boarded up, a shame to see places in this state.

We returned to the car 6hrs 15mins after setting off, not bad going we thought, despite the lack of views to begin with, we'd had a cracking day, it was good to spend some time in some local hills for a change, I enjoy the Highlands, but really should spend more time around the Borders, an early New Years resolution perhaps!

What a difference a week and a bit makes!

A shame about the weather, looks good for tomorrow though

Glad I missed the worst of the peat hags!

Certainly does meangarry, I was a bit disappointed at not getting the views, but that gives me an excuse to go back! I enjoyed your report RTMcB, might take that route next time and take in Croft Head and Loch Fell as well, won't be tomorrow though as back to work after a weeks hols!