I had the Knoydart hills still to do, hopefully in the next few weeks so decided on the Loch Arkaig trio so I could get a view of what to expect when I return to do the remote Knoydart 3.

A look at the map in advance showed Sgurr Mor also unvisited, although given the quoted times for the other 3, I certainly wasn’t sure it would be within my grasp, but kept in mind and actually plotted it in advance, so maybe I had made my mind up, not least as it was a far sized walk on its own.

I wasn’t in the best shape when I awoke at 0430 to get ready, having only had 4 hours kip the last two nights, so wearily I set off in no rush.

As daylight overtook darkness on the way down, it was looking somewhat gloomy on the route down Laggan and further on at Spean Bridge, the Corries, Aonachs and the Ben all hidden from view.

But as I turned into Loch Arkaig that all changed and I stopped a few times on route for pics…well its not a road that you can admire them whilst driving, rollercoaster is very apt Jeez

Deer stalking suggested a route up the glen which I duely followed on a good track, but this was some 6 miles in, one lady taking to 2 wheels for the first part of the journey. But once the forest was left behind, my first view of Sgurr na Ciche, still in some clag but soon to clear. 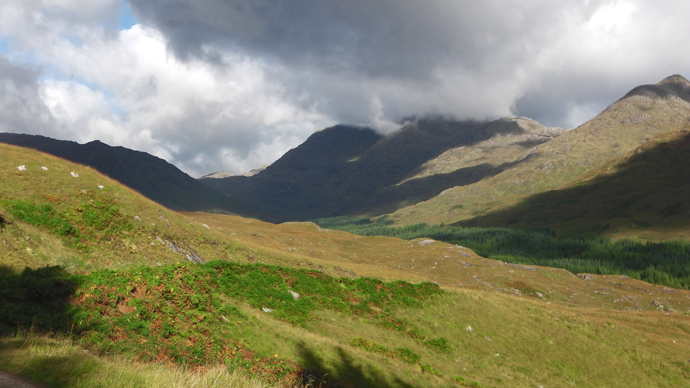 Amazing light today looking back down the glen. 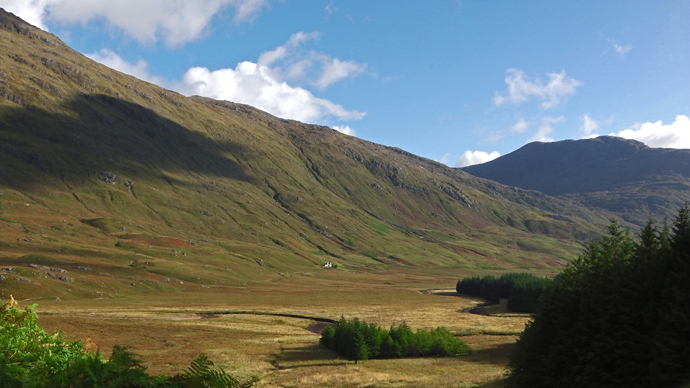 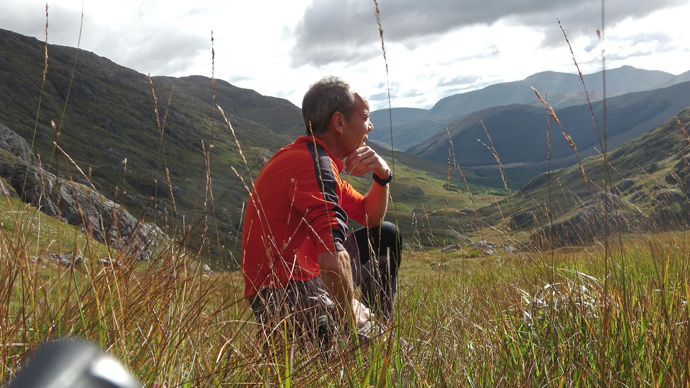 The path skirts the base of the rock face and enters a gulley, where the clegs had a field day with me. 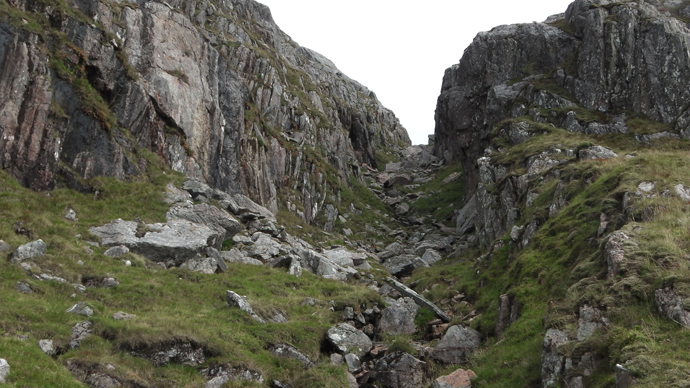 The top of the gully and breeze thankfully, but the uphill still continued until finally at the summit of the tallest of the day, and the views were stunning. 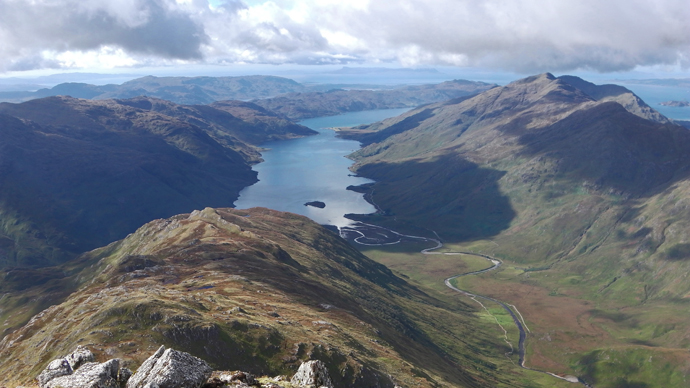 About face for a view of my route, with both of the other two munros ahead, first Garbh Chioch Mor and behind looking some way off Sgurr nan Coireachan. Sgurr Mor out of shot. 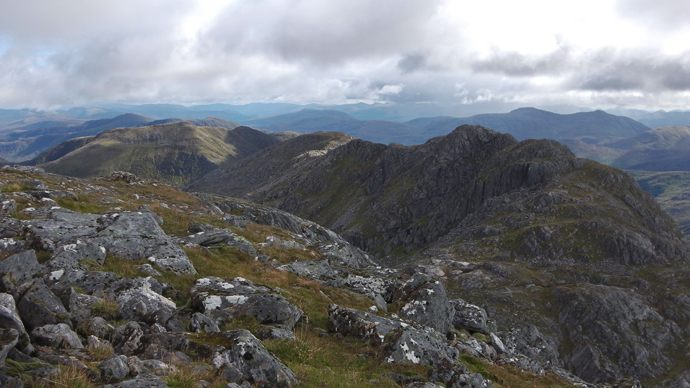 Ascent of Garbh Chioch Mor gave a good view of the ascent route direct up the flanks of Sgurr na Ciche. 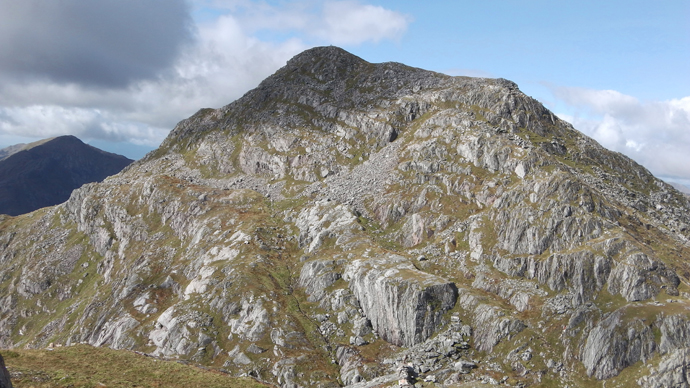 But after a brief stop to take in more views I headed off along the lumpy ridge, and Sgurr Mor came into view. 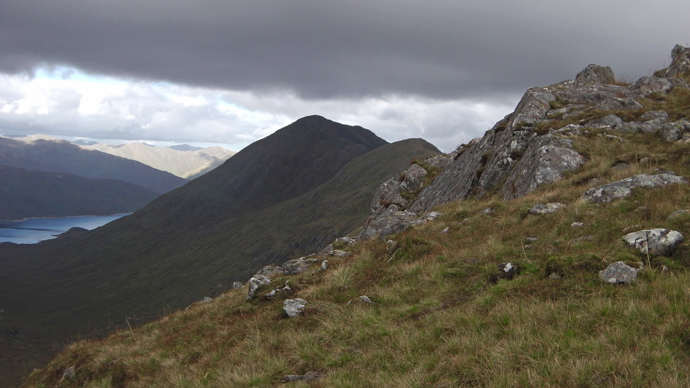 Later looking at the map the distance to this remote one was as much again as the ridge I was now on. My mind was changing, until I met a fellow walker up for the weekend who told me not to dismiss it just yet, he pointed out that the ridge to it looked more inviting than the traverse we were currently on. Hmm, all very well, but the legs need to be willing and able.

At the near side of Coireachan, I sat, map out, should I do it or not. I was weary, the lack of sleep catching up on me, also out of drink, if I were to press on I would need water. I looked long and hard at the route should I do this one separately, it didn’t cheer me up, I was here now, a large part of the climb done, and of course the walk in, not to mention a return drive down Loch Arkaig…that clinched it.

I climbed Coireachan and descended the far side and off the ridge to replenish my water, and set off to Sgurr Mor, with a couple of bumps in the way before Sgurr Mor itself.

The final slopes were zig zagged making the work easier at this stage of the day, with views back to more stunning light shows. 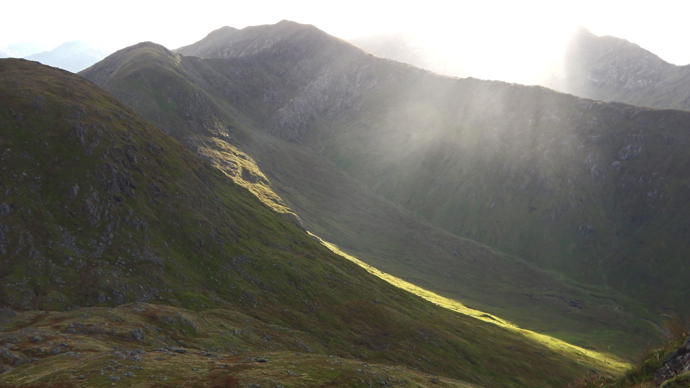 Views also to the Ben and Aonachs now free of that early morning cloud. 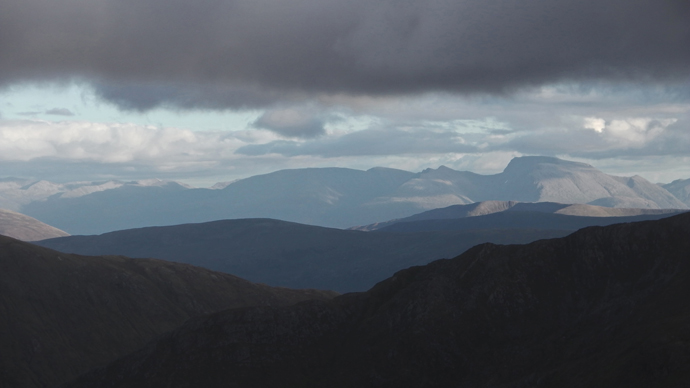 Finally the summit, I was shot ! The pointed outline of Sgurr na Ciche behind me. 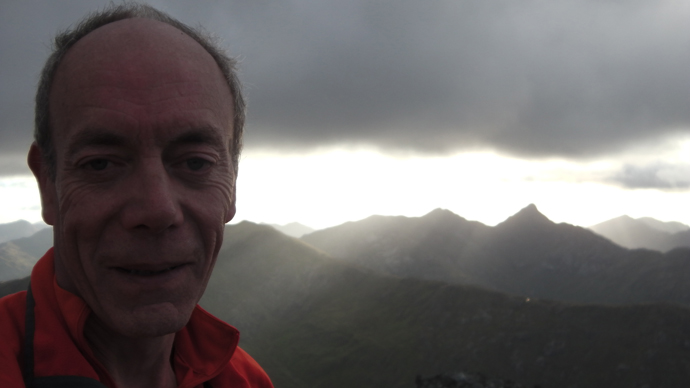 One last look at Loch Quoich 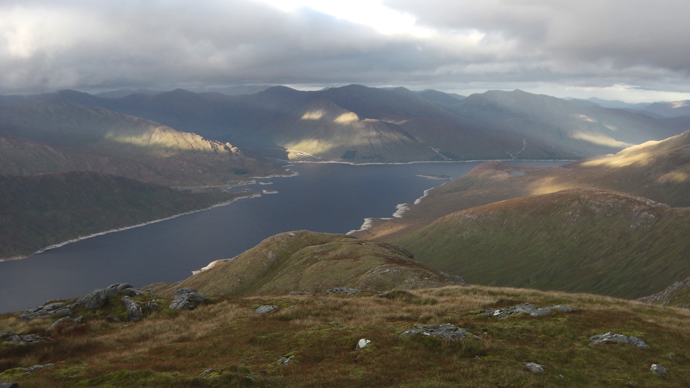 And the surrounding hills as the sun fell lower 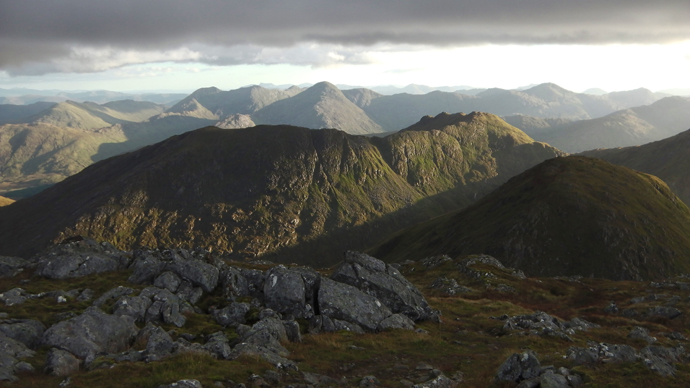 The Grey Corries now glistening too 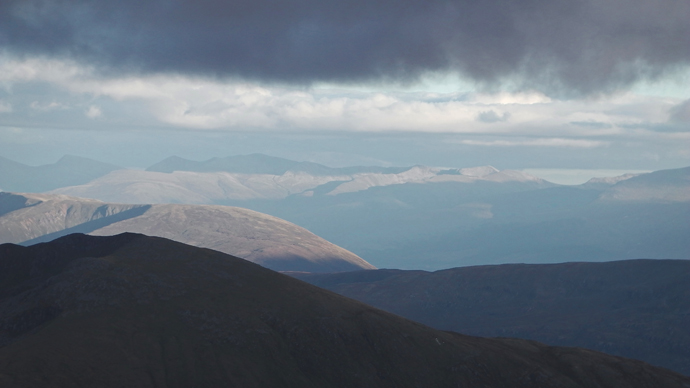 My final shot of the route out through the pass opposite. 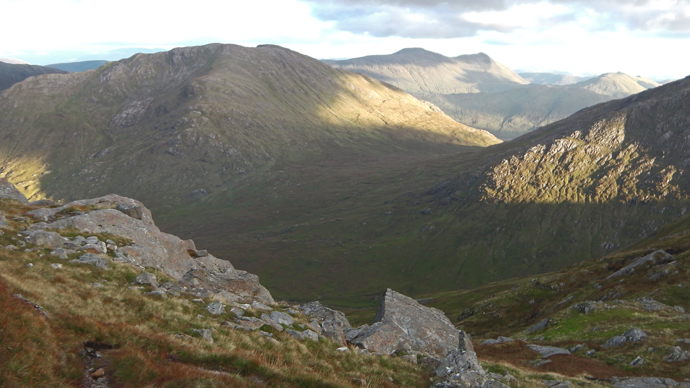 It had been a long day, I was pooped with the walk out over pathless terrain for the descent. But by 2030hrs I reached the car, in all 11.5 hours.

I hurriedly packed away my gear into the car so I could guzzle my drink that I had visions of for the last 3 miles, having almost choked on some cheese due to lack of spit.

I now had almost an hours drive to get out from loch Arkaig and set off forgetting my GPS which I had placed atop the spare wheel. I pulled up after only a couple of hundred yards but despite a search found no trace, so not only a long day but a trifle expensive too.

But what a day to savour

Bummer about the GPS but what a day - great effort.

Haven't seen a cleg for weeks - I thought the season was over for them.

Ooooft now that's a huge day,stunning area I still need to get to

Sussed out the insects They will not reproduce on any other host than deer. They will however bite humans, and the bites are said to be painful and may cause an allergic skin reaction. Initially the bite may be barely noticeable and leaves little or no trace. Within 3 days, the site develops into a hard, reddened welt. The accompanying itch is intense and typically lasts 14 to 20 days. Occasionally, an itch papule may persist for a year.[3] The main annoyance in humans is the inconvenience and unpleasantness of removing keds from hair and clothes.

That makes sense - seen a lot of those around lately and hard to shake off.

A great effort, Dave. That looks like a real beauty of a route, with some magnificent views.

Cheesr Simon-b, it certainly was, although I think Sgurr Mor was a hil too far, maybe with an earlier start as it was 0900hrs when I set off, a late one for me

Great report there, it reminded me well of my 10.5hr day without doing Sgurr Mor, that was another day along with its Corbett neighbour. Are those beasties not known as Kedds?? The Rd Deer at this time of year are crawling with them

Time for bed me thinks

yep, I was crawling with them too

Great report and pictures! Need to head there at some point as well. Seen these little insects on quite a few occasions as well...did not realize they would sting/bite

Cheers Mountainlove, thought I had a long walk till I saw your latest jeez you go girl.
Have to invite you on one of mine

not sure I'd keep up with yours

Great effort, a hell of a job in one day!!

Those Keds were everywhere last week.

Didn't seem to bite, but hung on for grim death, strangely!
The shot of Glen Nevis is simply superb.

The views up there are really spectacular.

Seems that losing valuables on epic treks is trending!

I really don't envy your walk out over that pass. We did Sgurr Mor yesterday via Glen Kingie, which was a 7 mile walk in/out, but the going was fairly level and dry. When dropping back down to Glen Kingie that pass on the far side looked torturous.

Thinking of tackling Knoydart soon too. Probably going to be a Sun/Mon if you fancy a joint expedition?

jepsonscotland wrote:Great effort, a hell of a job in one day!!

Those Keds were everywhere last week.

Didn't seem to bite, but hung on for grim death, strangely!
The shot of Glen Nevis is simply superb.

The views up there are really spectacular.

Thanks Jep, views are stunning, something about having mountains running to the sea, like An Teallach, could sit there for hours taking it all in.

electricfly wrote:Seems that losing valuables on epic treks is trending!

I really don't envy your walk out over that pass. We did Sgurr Mor yesterday via Glen Kingie, which was a 7 mile walk in/out, but the going was fairly level and dry. When dropping back down to Glen Kingie that pass on the far side looked torturous.

Thinking of tackling Knoydart soon too. Probably going to be a Sun/Mon if you fancy a joint expedition?

ah yes, remember you losing a few bits. The map showed a path over that pass, well lucky it had been dry, it was where stalkers drive those quad thingies, and it didn't exactly go in a straight line either.

Bugs were out cripes.

Knoydart, yes no question, think I have 1 days leave, as rest is booked. Sun/mon, is that walking in, camp, bothy, boat ? I was planning to walk into Barrisdale, first day, do all 3 next day, then out or crash out and walk out, but happy to go with any plans, be great to see you and the pack, as long as I don't have to carry the dog food

Beautiful photos. What an amazing looking walk. Thanks for sharing.