With another astonishing weather forecast for this weekend, dry and warm, it made sense to relegate the cycling and get high in the mountains. Checked various options that would be suitable for my ongoing injury issues, and Julie's graded exposure into some fine mountain ranges, so I chose Binnein Mor and Na Gruagaichean (part of the Mamores range) from Kinlochleven. A walk taking in the highest summit of the Mamores - Binnien Mor, under 15K, nice ridges, not too much ascent, great views, a pathless descent and from an area/starting point I'd yet to visit - Kinlochleven. In comparison to our last 2 walks I was hoping this walk would be quieter and have a sense of remoteness, I was also looking forward to the views from the summits as my previous walking of the Mamores, the 10 in one day, presented none at all!!

Left Glasgow at 7.00, it wasn't long before I stopped to take in some sunrise photos from Luss at Loch Lomond. 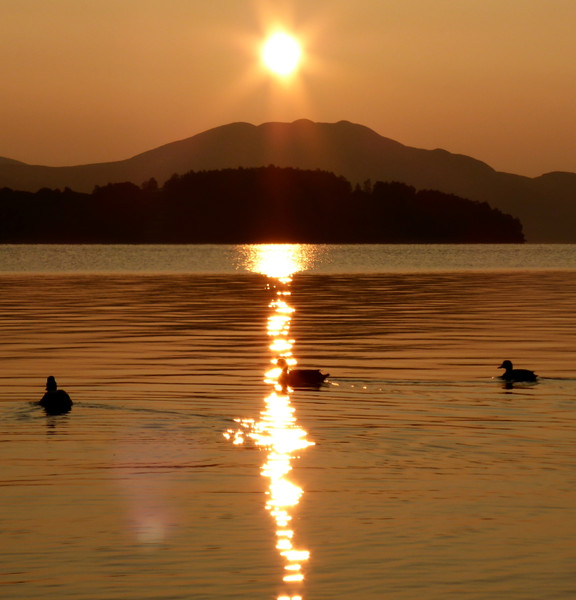 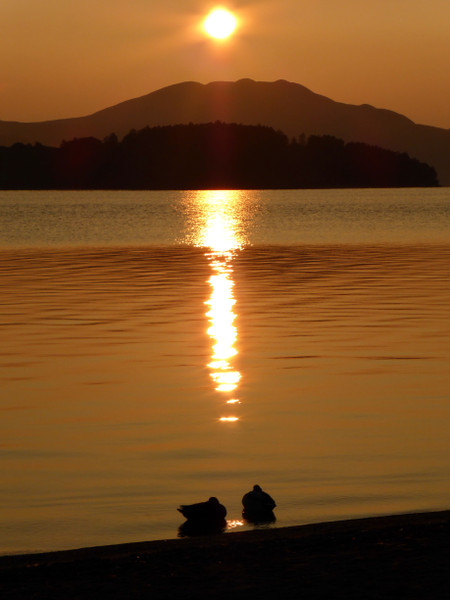 The drive up was lovely. The sun slowly showing itself from behind mountain tops, rising into the blue skies. Rannoch Moor, with its vast landscape, and Glencoe with rugged mountains looking particularly alluring. Arrived at our starting point without issues and good to go at 9.30am.

Made sure I read the instructions several times so I wouldn't get lost in the woodland, which is the setting for the first part of the walk. Thankfully no wrong turns and soon open moorland is reached giving way to stunning views back west to Loch Leven. 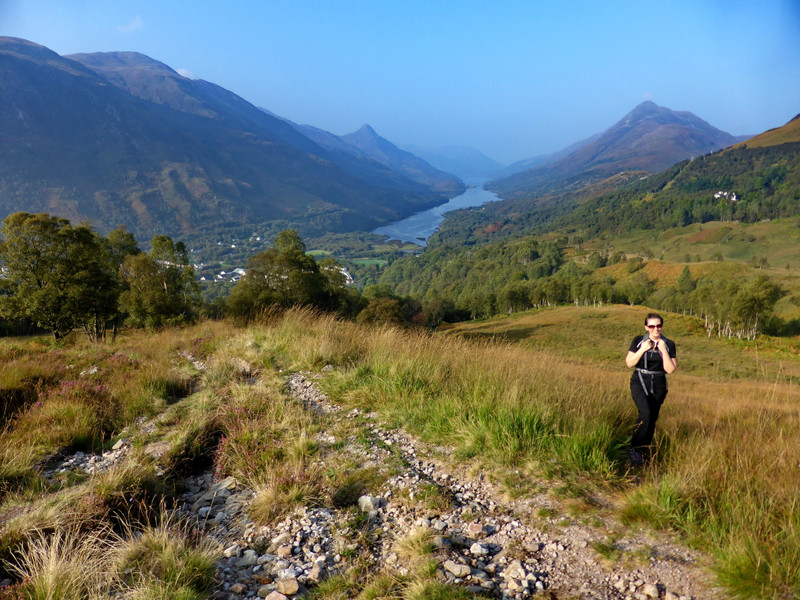 Continue East for another 4K across the moorland. Was really enjoying the wide open space at this point, and the going was very easy on a good path. Only issue was ticks, which would continue for the duration of the walk. I just got on with it though as didn't want anything to enjoy the walk. Julie was using language that I hadn't heard from her before, poor girl 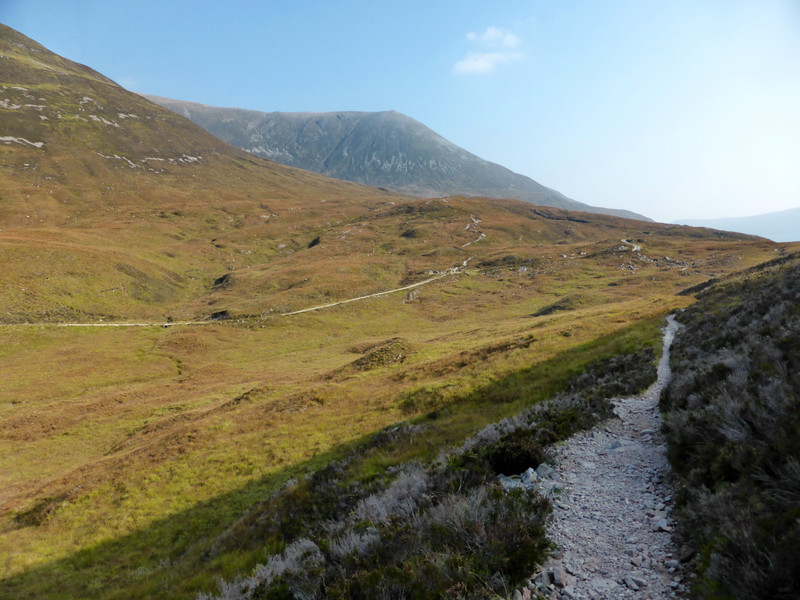 There is the option of a steep ascent up to Sgor Eilde Beag to reach the plateau but we decided on the easier route which took in a closer look at Coire an Lochain (CaL)and Sgurr Eilde Mor.

To reach the plateau head NE from the Northern tip of CaL and head up an array of zig zags. Looking back East. 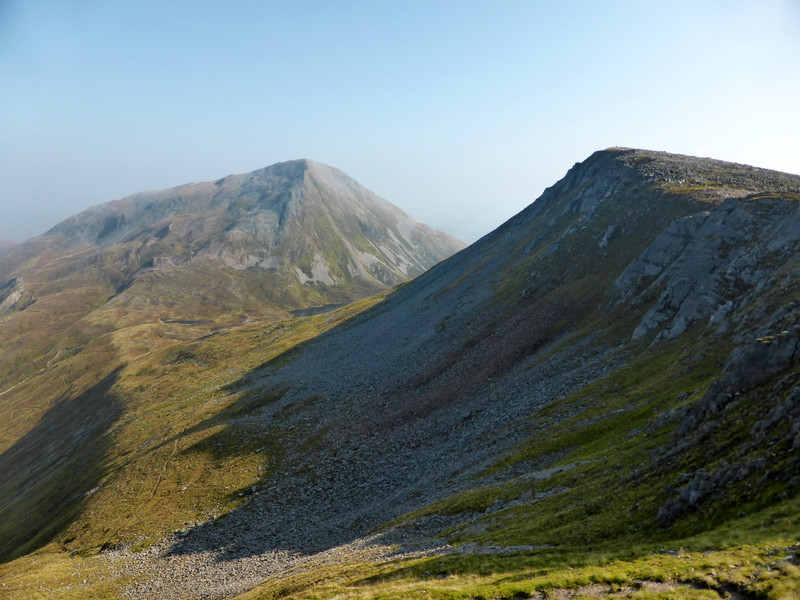 And after taking it very easy to this point, as we did the full day, we reached the plateau which gave access to the ridges and our two targets for today. 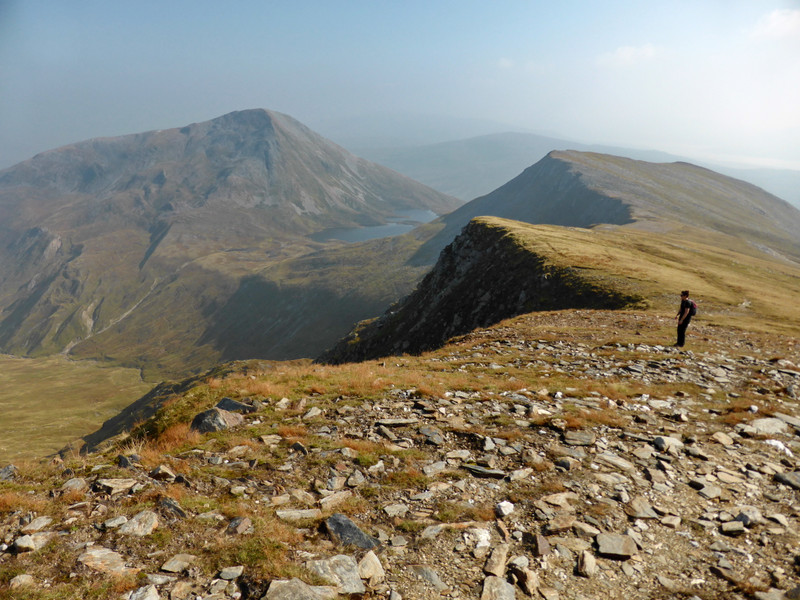 Binnien Mor to the right. 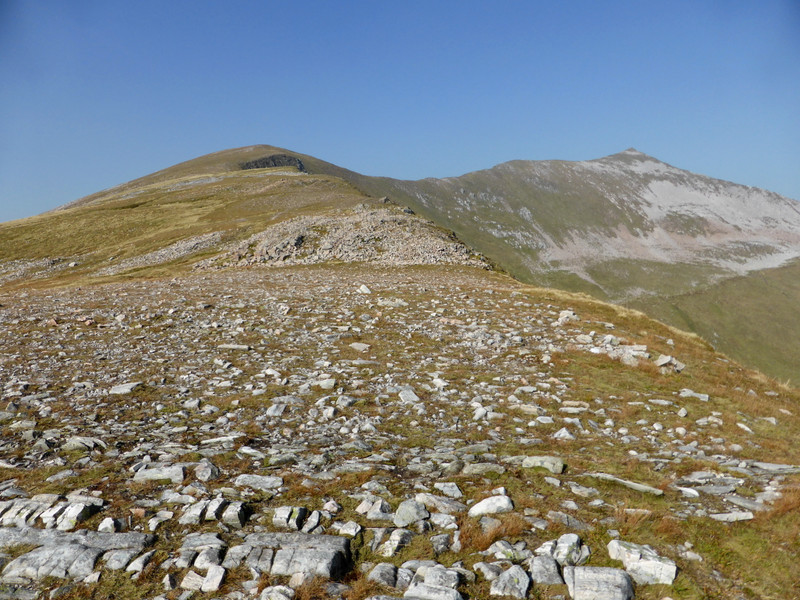 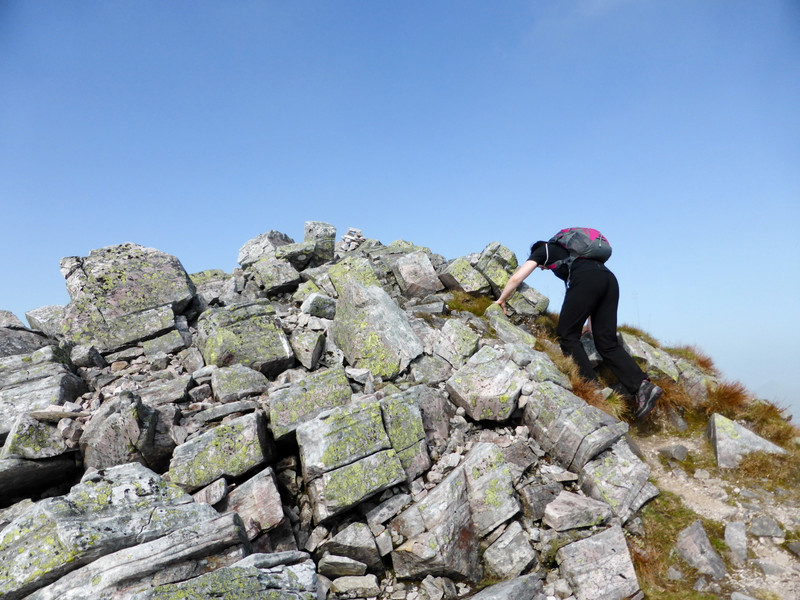 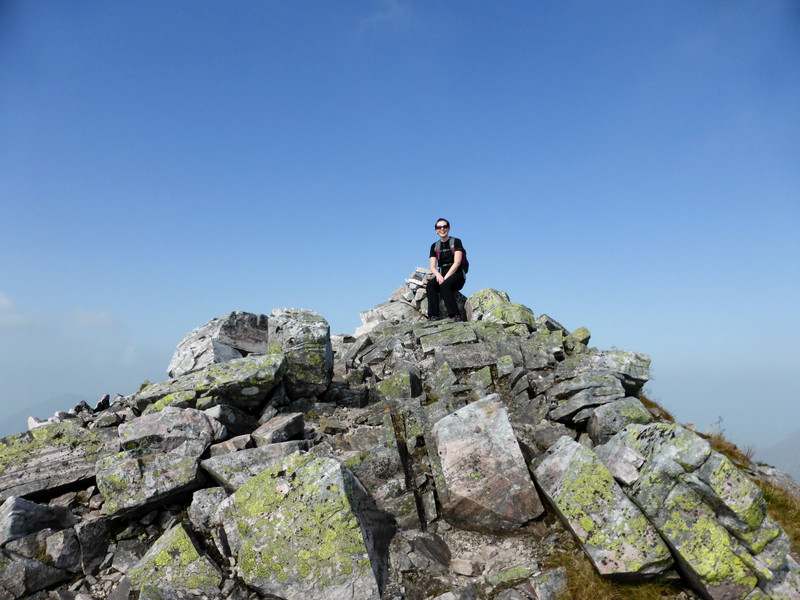 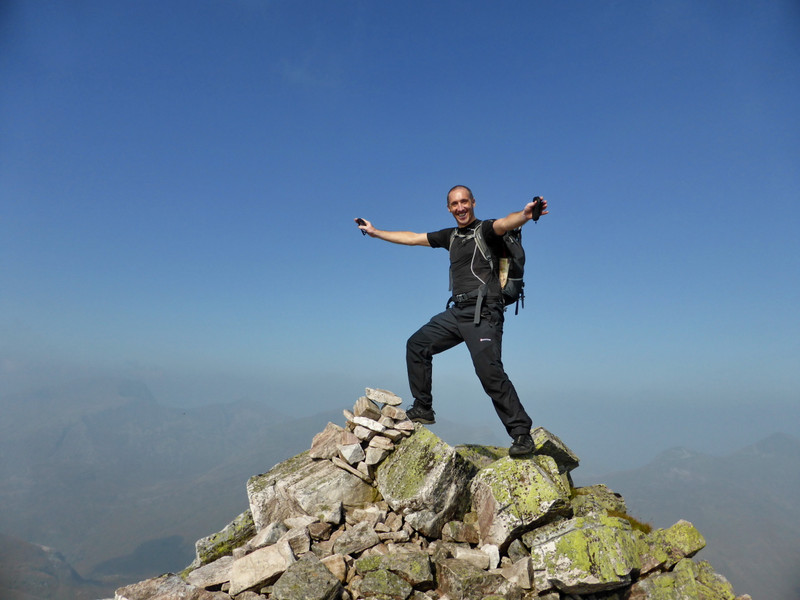 I took a wander further along the ridge then took some photos looking back South to the summit. 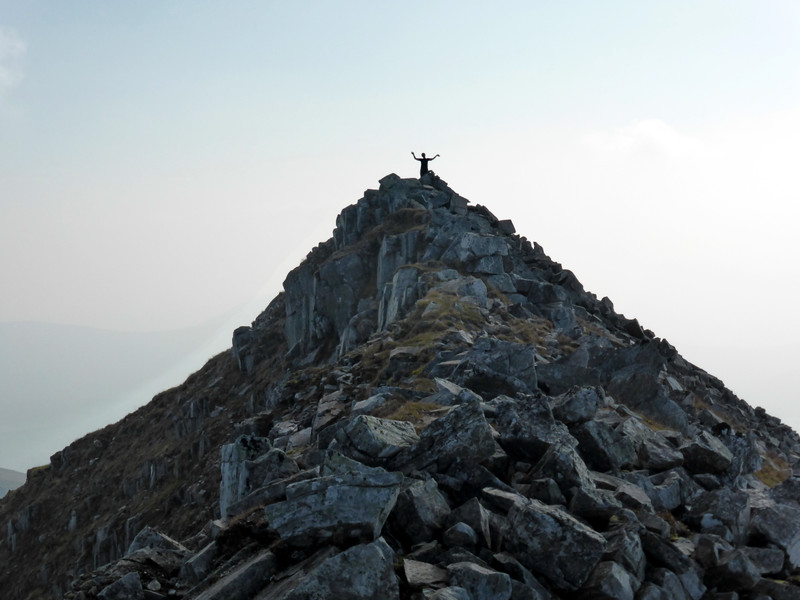 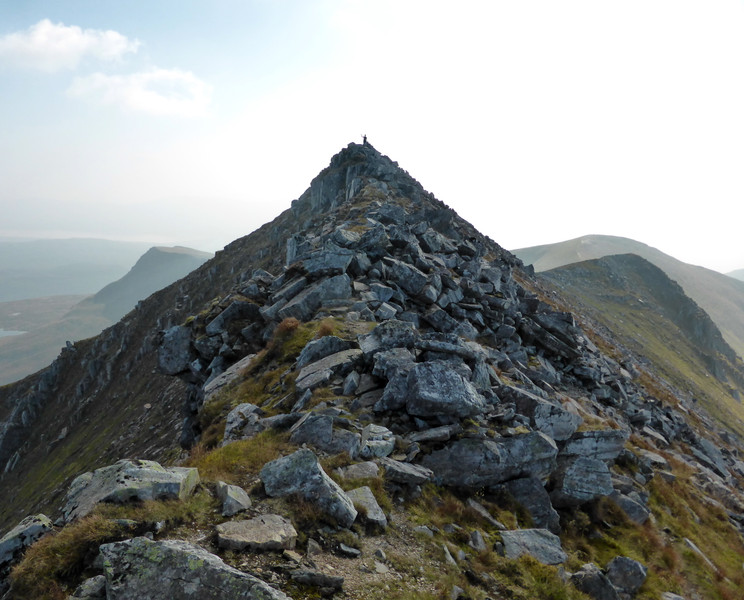 Spoke to Julie regarding the ridge to Na Gruagaichean, she was fine with this. I explained it looked narrower than it actually was 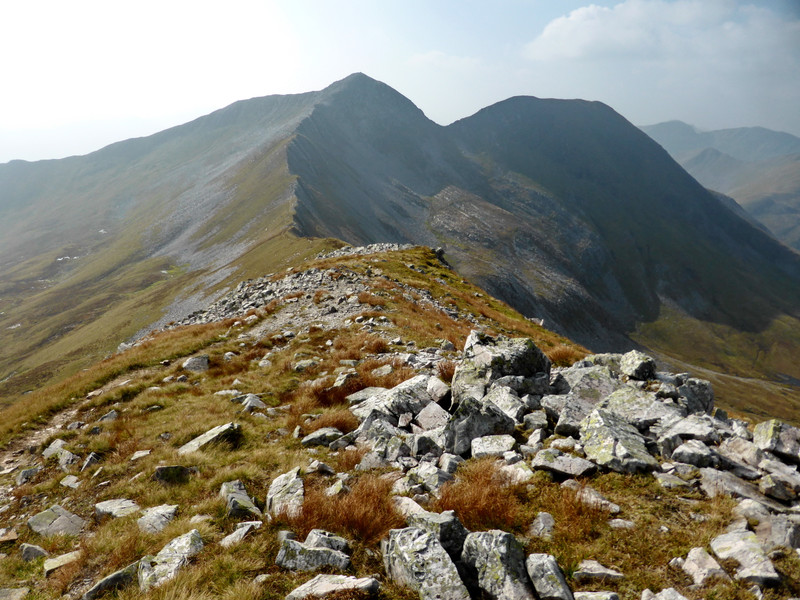 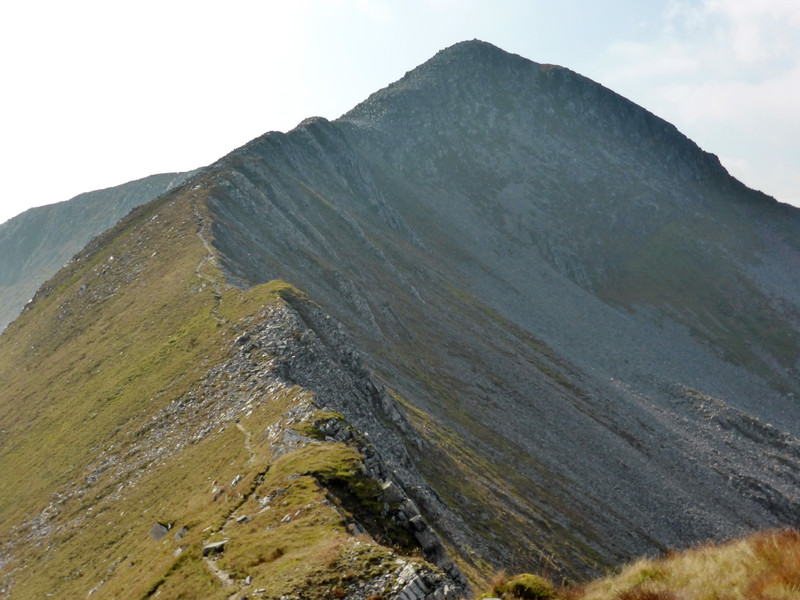 The walk along the ridge was superb, the views N & NW to the Aonachs, Grey Corries and Nevis looking majestic in the searing hazy sunshine.

Julie scrambling up the boulder field which just before the summit of Na Gruagaichean. 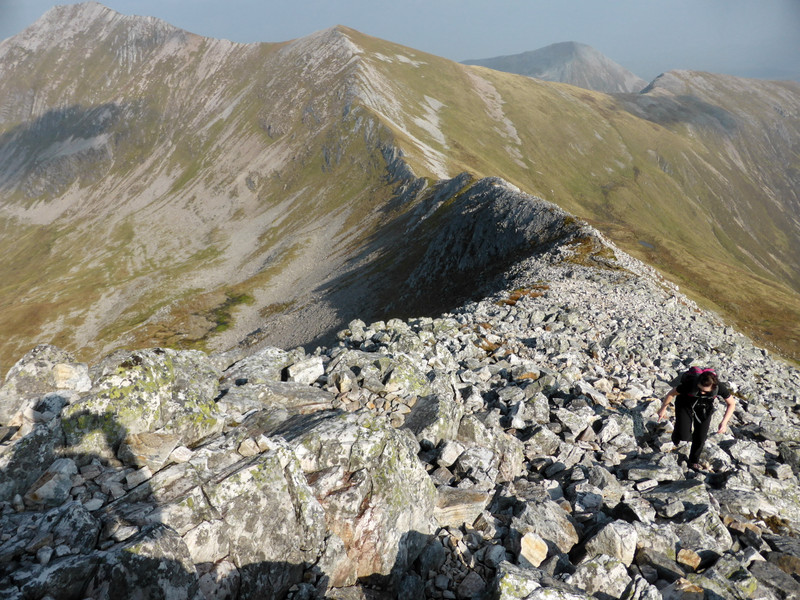 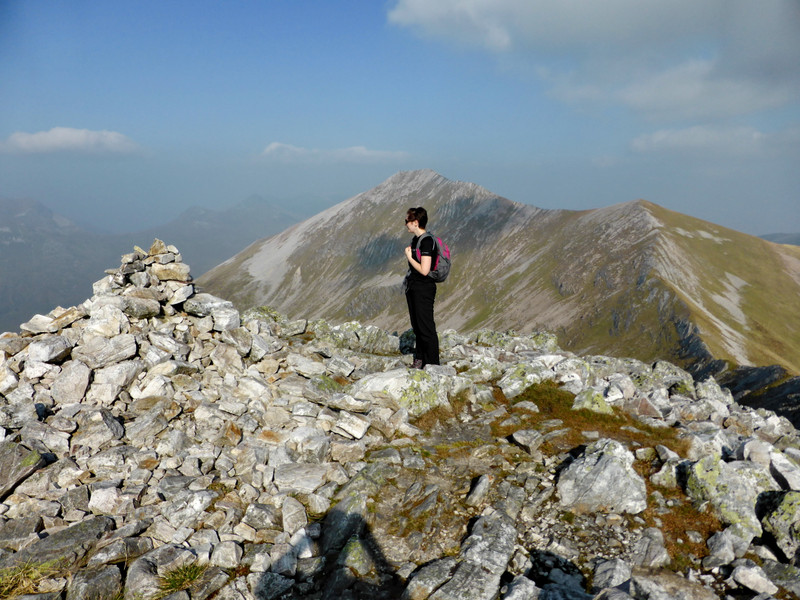 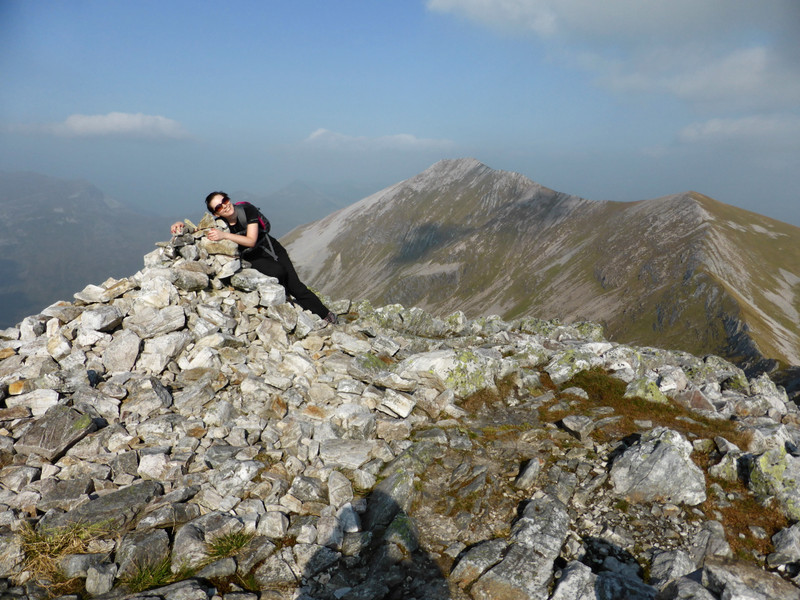 We sat on the summit for an hour or so and took in the wonderful views, the sun belting of our faces...bliss! I was surprised that we couldn't see any other walkers, we only seen one walker at the start and had briefly chatted, this gave the illusion of us being the only people on these mountain ranges. An illusion we gladly embraced

It was now time to head down the mountain. This was the most difficult part of the walk as it involved descending 2k SW from Leach Na h-Aire to reach a path which takes you through the woodland again and to the finishing point. Much care and attention was giving here. 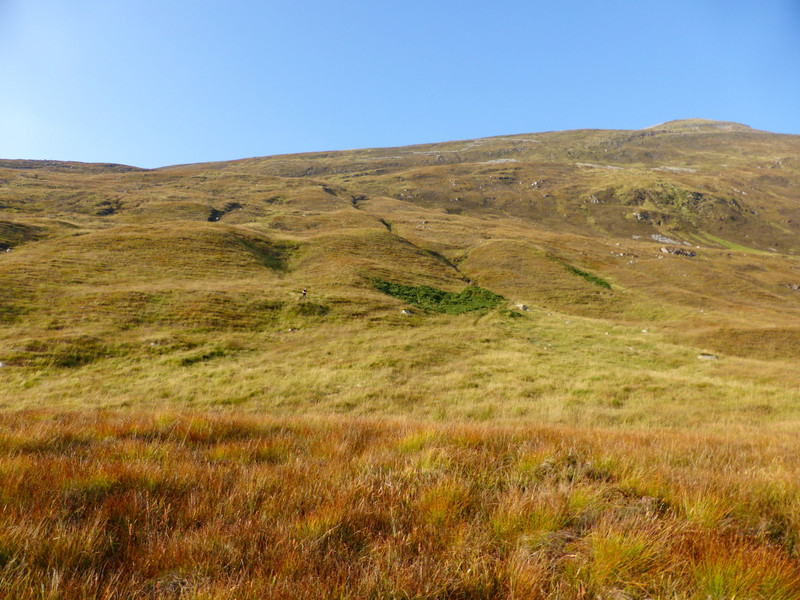 We finally made the path and made our way back through the woodland to the car. 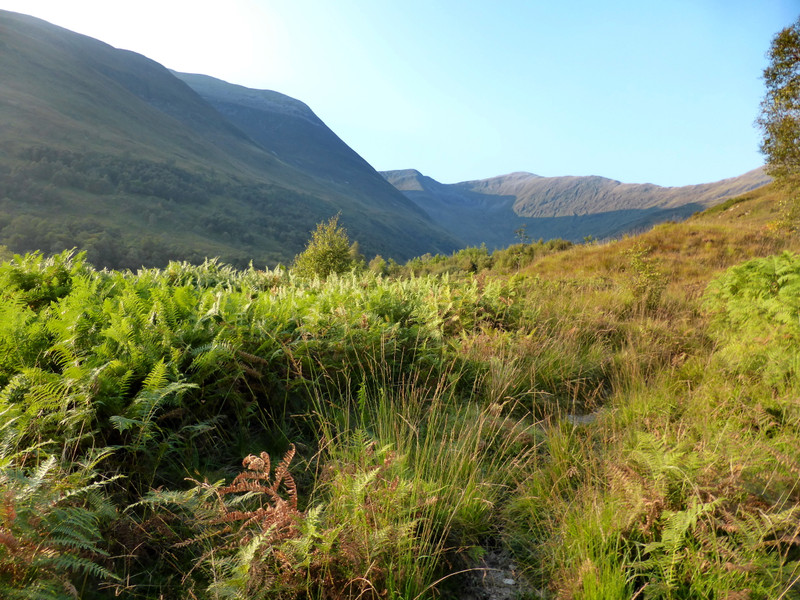 We both felt pretty dirty at the end and made way to the public toilets in Kinlochleven for a wash and change. On route home we stopped at the Real Food Cafe in Tyndrum which served up a decent menu for us two veggies. We gorged on spicy lentil burgers with onion rings and chips

Arrived back in Glasgow at 10pm.

Kinlochleven was very nice, I plan to cycle around the loch very soon, and the walk was fantastic...not long till winter now

We were doing the opposite end of Mamores (Stob Ban - Mullach nan Coirean). It was a great day despite the haze. I actually got sun-burned, unusually for late September...

"Your end" of the ridge looks spectacular. We still haven't done these Munros, but you just made my appetite grow

Amazing photos, appetite well and truly wet for these hills.

Glad you got the views this time round! Great pictures

. Sounds like your rehab back into hill walking is going well.

BlackPanther wrote:
"Your end" of the ridge looks spectacular. We still haven't done these Munros, but you just made my appetite grow

Get them next time BP. Shame we didn't bump into each other, was a good day for a natter.

Yeah, got lucky with the timing....again

Silverhill wrote:Glad you got the views this time round! Great pictures

. Sounds like your rehab back into hill walking is going well.

Me too...on both counts

Ah so this is what i missed , did these in Mist

Good stuff nothing worse than an injury that restricts your options and i wish you the best with the recovery .

I also want you to catch up with me

Great pics as usual. Thinking of doing this which would give my pal 2 ticks (not the kind you were talking about hopefully!) and me one as I've done NG before but not BM.

Collaciotach wrote:Ah so this is what i missed , did these in Mist

Good stuff nothing worse than an injury that restricts your options and i wish you the best with the recovery .

I also want you to catch up with me

How the hell did you get ahead of me....oh yes, I've been injured for 2 years! Just wait till next spring matey

dogplodder wrote:Great pics as usual. Thinking of doing this which would give my pal 2 ticks (not the kind you were talking about hopefully!) and me one as I've done NG before but not BM.

Ah the wee buggers bit all day!! Good luck on your walk.

A fine day out, and my preferred end of the ridge (one of those occasional times when east is better than west...). Brilliant colours make up for the haze

I have a crossing of the ridge (From Kinlochleven to Glen Nevis) planned at some point. Not sure which summits to take in though - too many choices!