What a difference a month makes! Tried to get up these two the day before Easter and turned around due to very thick cloud and large amounts of snow which made the path totally vanish before my eyes. Glad I did, because yesterday conditions were fantastic, except for a bit of chilly wind. My pal from Yorkshire accompanied me this time and we had no problems getting through the forest and out onto the upper moor. The path was considerably less boggy than before and it was easy going all the way up to the summit of Beinn Dubhchraig. It was nice to have some views! We took our summit photos and then dived out of the wind behind some rocks to enjoy lunch with a view of Ben Oss and Ben Lui. I was properly introduced to Kendall Mint Cake - its like Red Bull on steriods. After a short descent off Beinn Dubhchraig we followed the path around to where we were even with the bealeach and turned right, heading up the gentle slope between Ben Oss and the little top below it. No problems from here to the top. What a view of Ben Lui from this position. Just wondering, has anyone ascended or descended Ben Lui from its northeast ridge, Stob Garbh? The Munro book says this is doable but it sure looked steep and fairly dangerous from Ben Oss. After we finished taking in the views it was back up to the shoulder of Beinn Dubhchraig and then down to the forest. A great walk today with lots of eye candy. Don't think I'd want to walk the boggy path in mid summer though. 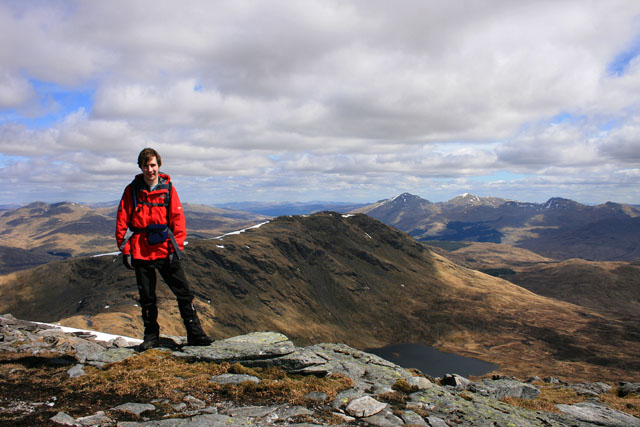 Hi stretch read your report could not have been posted at a better time,as it looks like I am going to tackle these 2 munro"s on Sunday,rather than what I had 1st planned to do.

Nice report Stretch.
Some lovely pictures there. You got some nice weather even if the wind was cold. Its nice to see the snow is gone. Might have a go of these soon.

Thanks guys, these two hills are actually very nice in good conditions, best get to them before the bog fairies pay a visit though

Yes, great report. That Stob Garbh ridge on Lui looks really steep but it does seem alot of people go that way and I've never heard it is that hard.