It wasn’t a good start to the trip – trapped in the hostel on Bridge of Orchy station with a load of railway buffs for over an hour.

The train had broken down and we were invited in for a cup of tea while we waited which was nice. I guess us outdoor types must seem boring when we get going as well. We arrived in Corrour at about 4.30 and it all looked a bit grey and drizzly. 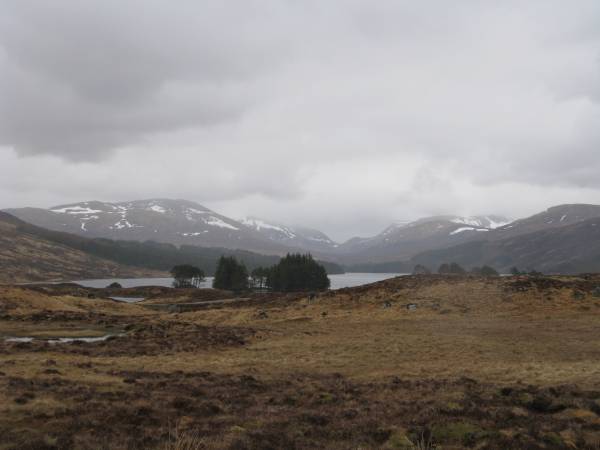 But we walked along to the other end of Loch Ossian before pitching the tent by the river just beyond the lodge.

After soup, noodles, cake and a game of Scrabble we turned in. It was still a bit grey the next morning – Katie seemed reluctant to get out of her sleeping bag 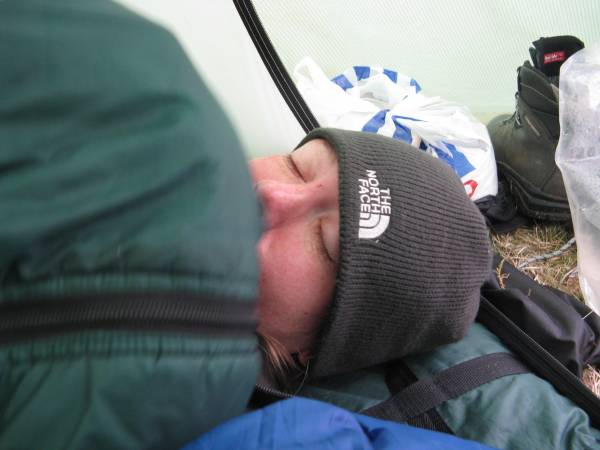 but it’s amazing what a cup of tea can do! We set off at about 8am, crossed the bridge and walked upstream to cross the Allt Feith a’ Mheallain before tackling the grassy slopes of Creagan na Craoibhe. Passing over Meall Glas Choire the ground became rocky as we made our way to the summit of Beinn Eibhinn. There was quite a lot of snow in the north-facing corrie and the way ahead to Aonach Beag was clear, down steeply and then up again to the summit. Geal Charn did not look that far away and we were soon at the cairn having a bite to eat. We decided to head for Carn Dearg via the Diollaid a’Chairn but had to think again. There were a lot of cornices all round the corries and we decided not to risk it. So we walked round the corrie to Sron Gharbh and descended the ridge towards An Lairig before heading east to gain the ridge of Carn Dearg. After lunch at the top we dropped down towards Loch an Sgoir before descending to path and walking back to the tent via Bealach Dubh. It seemed an awfully long way and it was quite boggy after the bealach. But we eventually arrived back at the tent after about nine and half hours.

It was a cold night and we had a bit of a blizzard as we set off for Sgor Choinnich early the next morning so not many photos for this bit. However the clouds did clear after about an hour and it was sunny if not very warm for the rest of the day. We contoured round Sgor Choinnich (well, we were carrying the camping gear!) and headed for Sgor Gaibhre and back. By this time there were brilliant views all round of the Mamores, the Grey Corries, the ridge we had walked along the previous day, Schiehallion etc etc. Having collected our baggage we went south to bag the Corbett, Meall na Meoig.

At this point I started to have the tea and scones fantasy. Reckoning that we would be in Rannoch in plenty of the time for the train I proposed going to the hotel to while away an hour or so over a pot of tea and some cakes. The thought sustained me through the next hour and a half and the final plod down the road to Rannoch. And the hotel was closed. And so were the tearooms on the station. And the toilets. We had very little water left and so, determined to have a cup of tea, I stalked off in search of some water. A very nice lady in a car parked near the station filled one of our pans with water from her flask and we soon had the stove on and were dipping our last teabag in boiling water. Fortunately the train was on time and we rounded off a great weekend with fish and chips in Tyndrum.

our_route.gpx Open full screen  NB: Walkhighlands is not responsible for the accuracy of gpx files in users posts
Sorry, the order of the photos is wrong but I have tried to sort it out without success. Dunno what is going on.

But you get the general idea of what we did I hope. Great stuff, and Schiehallion from a perfect angle...

Some couple of days walking that - well done to the young lassie! I can't believe the amount of snow near the Diollaid ridge! in May!!

I'd have been gutted if I'd walked all that way and found the tea room shut - that kind of thing really ruins my day as I'm a huge fan of cakies and suchlike at the end of the day!

Great pics of the Beinn Eibhinn ridge anyway and thanks for those as I have it to do yet. Think we're gonna tackle it from the Tea Room B&B (if they're still doing B&B - anyone know?), cycle down Loch Ossian, do the ridge and probably cycle back down the other side of the loch for a change in scenery.

Great report. I took a pic of Schiehallion a couple of weeks back from Sgor Gaibhre that is almost exactly the same

At Corrour station? It closed down last year MC - the tea-room mentioned in the report is at Rannoch Station.

Corrour Station has been turned into an extra hostel by the SYHA just last week but I think it is doing food.

Try it from Laggan. 9.25 hours -17 miles but good approach -cyclable for 3.5 miles
Worst part is leaving the path and heading for Sron Fhuarain (?) as endeless burns and peat hags to cross

Ahhh, brings back fond memories of a recent trip we had. Still struggling with my knee joints, and a calf strain.

The best part had to be the ridge above the Culra Bothy.... Just a pitty we saw nothing due to the typical Scottish weather.

Users browsing this forum: No registered users and 178 guests