First of all let me apologise to my walking buddies for the tardiness of this report, such has life been in these past few days this is the first time I've had an hour to sit down and write. In that time, Jonny616 has even been back up to Torridon again and written a cracking report of his own.

So let me take you back to the Saturday before last, the 13th day in September 2014. When not even the referendum could hang in the air, as large as the southern face of the Greyish One. The mighty southern cliffs of Liathach made for an intimidating welcome after the long 4 hour plus drive into the North West from the Central Belt. Perhaps, it was an omen for things to follow, because immediately thought... "No Thanks."
Such thoughts didn't last long, for I was soon under an aerial bombardment. Torridon's Midgie Flying Squadron were swooping in for breakfast. It was time to get booted and suited and just as 9 o'clock tolled, we were off.

The walk starts off relatively straight forward, but soon gets steeper and steeper. Up the glen Sgurr Dubh and Beinn Liath Mhor look grand and from here so does Seana Mheallan across the glen. Great scores visible across the Marilyn, showing the direction of the travel of the ice that sculpted this amazing place.

But in what seems like no time the walk takes you higher than the wee Marilyn and the first, of many, many scrambly bits are reached. These first few scrambles don't present any real difficulty in the dry and soon we were reaching the only rest bite Liathach offers on the ascent, in the little flatish bit at the foot of Toll a'Meitheach. We took the liberty of a breather here, taking on board fluids and pepping up for the last steep slog up onto Liathach's ridge.

After the flat bit the path is a bit rougher and there are some parts where you'll probably need to get your hands dirty, but there are no real difficulties, other than the punishingly steep terrain. As you look along the ridge, the great terraces that make up Liathach just seem to make the moutain look even tougher. Then rather unexpectedly the path begins to flatten out and a small cairn is reached... don't be too exuberant when you reach the cairn... don't run past it, or you find yourself being Wylie Coyote.... only humans don't recoved from 3000 foot falls like cartoon coyotes! Coireag Dubh Beag lies way down below and bring a stark reminder to brains fogged by the tough slog up the mountain that Liathach is not a mountain to trifle with and this is a tame part!!

At the wee cairn our party split in two, three of us went of the Eastern top, Stuic a'Choire Duibh Bhig. Hoping to gain a view of Beinn Eighe through the grey mists. Nae such luck, but the wee top was in the bag..... This top is the same height as Ben Vane at Arrochar... Ben Vane's a tough nut, but SCDB makes it look like a walk in the park... then the realisation dawns SCDB is not even a munro! The grey mists were annoying, they were sparse enough that we could see all the great drops around us, but dense enough to rob us of most of the stupendous views we knew this mountain grants walkers.

We didn't hang around on the eastern top for long, no real views and three pals to catch up with meant time was short on it. The walk back towards the wee cairn if anything provides an even better view, the narrow ridge leading up to Spidean a'Choire Leith. 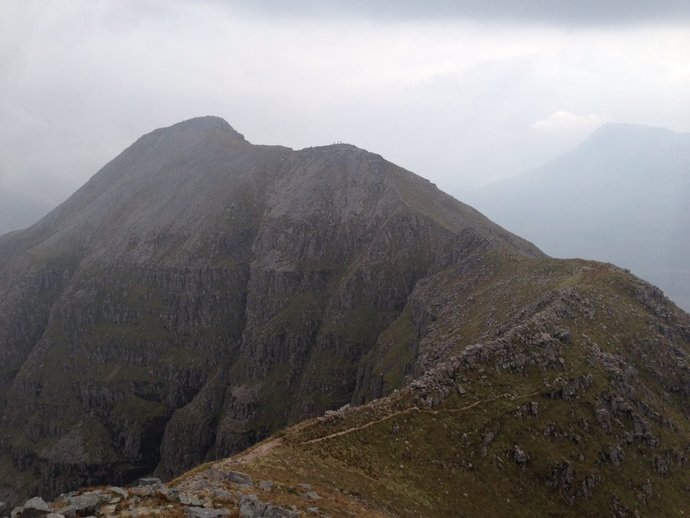 The ridge is however easier than it looks, yep there is exposure, but only on one side and the paths are broad. A steady plod along these paths and over some boulders passes without much difficulty. Soon we had caught the others at the top of Spidean a'Choire Leith. Number 90 in the bag for me and definitely one of the most challenging and rewarding. "YES!" I had made it! I had strived for the impossible dream and gotten it, even if the views were partially obscured. The descent down from the Spidean is over an awkward a steep boulder field, can't say I enjoyed it too much, but my mind wasn't thinking about boulders...it was thinking about the ever approaching pinnacles. We were literally heading into The Teeth of Liathach, Am Fasarinen. As we approached them I decided I'd was going over the teeth and not around them. I was to be last up. I wanted to watch the others and see what route they took... this was the first time I had done any "real" scrambling and I didn't want it to be my last.

The first pinnacle has a big rounded boulder near the top, with only a couple of wee grooves to get your feet into. For an experienced scrambler, no problems. I however just couldn't see where to put feet... on the other side of the boulder.... nothing. Thin air for the best part of 900m straight down. Time to ask for help. Cue Spider, his patience was excellent. Footstep by hand hold, he got me up.. on to the top of the rounded boulder... only I decided to sit down.. Straddling the rock like it was a horse... right foot hanging over the afore mentioned thin air. The left foot was much better, it was dangling about 10 feet off the ground!! ... Leaning all to the left... (I'd rather fall 2 or 3 metres than 900!) I bum shuffled along the rock, found a protruding rock, stepped onto it and up! The first pinnacle was conquered.... I needed a seat and I needed dram, but I only had lucozade... the relief swept through me. Then a strange buzz, thinking back I still don't know if I enjoyed that or not!

As I took a swqig of Lucozade, Alec was making the top of the second pinnacle. I followed him shortly after and then onto the third, the but by then I'd had enough of scrambling. With the largest pinnacle to come, I opted for the bypass.... no easy alternative. Walking the bypass is like walking on a shelf. A narrow terrace extending out about one or two feet from the sheer cliff face, that snakes it's way round the front of the mountain, in and out of gullies; it slithers over damp patches, exposed boulders and muddy spots. It's not for the faint of heart. 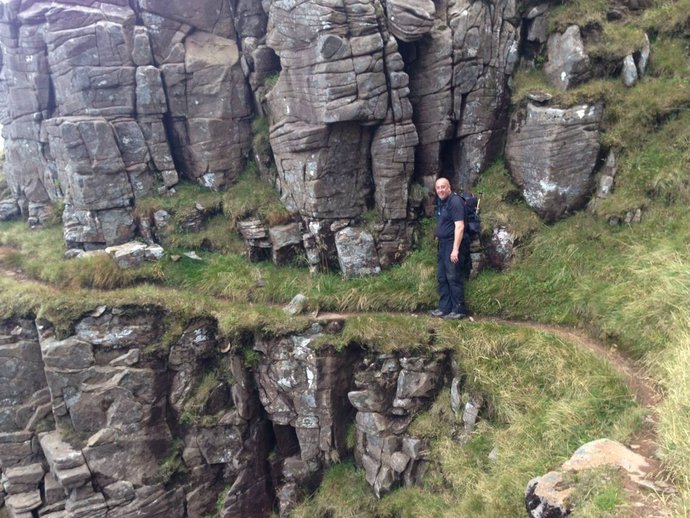 Once The Teeth are past it's a casual plod up the hill towards Mullach an Rathain.... It shouldn't be named after the police, it should be named after whisky..... cause after the trauma that's just past and the knowledge of the difficult descent to come, you might need a dram at this relatively peaceful summit. The greyish haze however, once again robbed us of any real views, only nearby stuff visible, Beinn Alligin all but invisible.

"Mullach nan Uisge Beatha" is left behind and an intially easy walk down the ridge is brought to an abrupt halt, on scree type stuff. It's not a scree run, but it's all loose and horrible and incredibly steep. Down, down, down it goes into coire. All the time however the path gradually improves, until the grassy stuff is reached again. "AYE!" I was down... almost! The path alternates between a dirt path crossing grass and rocky/slabby patches. It is, no matter, a tough, tiring descent and I was burst by the time the ladder style was reached. Thankfully the road isn't much further beyond. Where once again Spider came to the rescue. He was miles in front of me by now.. he brought his jeep along to the end of the descent path and gave us all a lift back along to the car park... Better Together... at least this once ... until we all fell victim to the Torridon Airborne Midge Squadron.

Forty-Five midgie bites later, we were driving past Beinn Eighe in glorious sunshine, all the summits completely clear. Such is, the always constant, Hillwalkers Law... at least when you're walking with the Clagmeisters Jonny616 and Gammy Leg Walker!

Well done guys, the Grey One is always a superb adventure, even if the day is a bit hazy... Actually, we were just next to you that Saturday, on Beinn Dearg, another good scrambling test!

Love it...I think the photos off that Bypass path have just about convinced me not to try it!!!

Avocetboy wrote:Love it...I think the photos off that Bypass path have just about convinced me not to try it!!!

Save it for Winter, when you can't see the path

Felt quite tense reading that and your photos didn't help!

tried the first pinnacle but it was to slippy so took the path all the way after that.

Just kidding! I was so desperate to climb the pinnacles and was sooooo disappointed because I couldn't as when Wuls and I were there the weather was total pants and wet. To be completely honest though the bypass path was incredible! I loved it

I am glad that I have done it but I will be back on a glorious sunny day to climb the pinnacles and those astonishing views that those mountain have to offer.

The Midges up there are bloody awful!

A wonderful mountain, for sure. You got some pretty decent photies too, clag notwithstanding.

Glad this ones now done.

Rollon the next one.

I remember sitting on this by-pass path having my piece

Very informative photos despite the clag, thanks!

and a great day out too!