I decided to risk a mixed forecast to hopefully take on the three fells at the head of Upper Wharfedale on Saturday with my thinking being to start with Birks Fell then hopefully take on the notorious Yockenthwaite Moor before reviewing just how much the rough walking had taken out of me before deciding whether to add Buckden Pike to the day.

A cold start greeted me in the morning (it was 2 degrees driving through Kettlewell) with thick valley fog all around at the start at Buckden.

However the signs were good that this would actually be a good morning for walking with a good chance of getting above the valley cloud.

The car park was already quite busy at 9am but I was soon heading off in the opposite direction of most the people there towards Redmire to start the climb to Birks Fell. 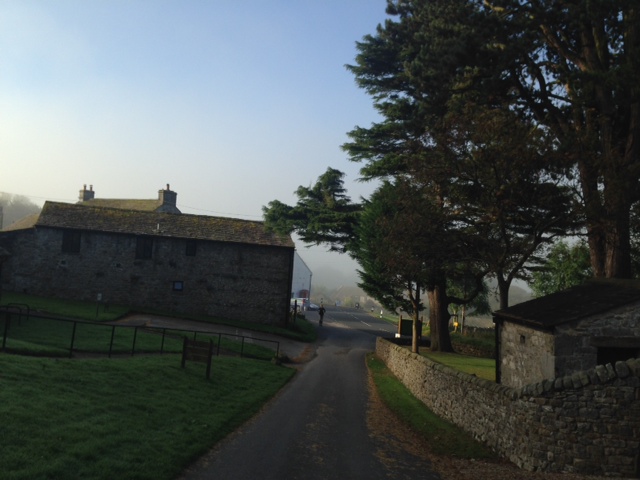 Initially this is on an excellent track and progress is quick and easy until I hit the wall on the summit plateau near the Trig Point on Firth Fell. The views were excellent at this point with Buckden Pike looking majestic across the valley and a lovely cloud inversion engulfing the valley below it. 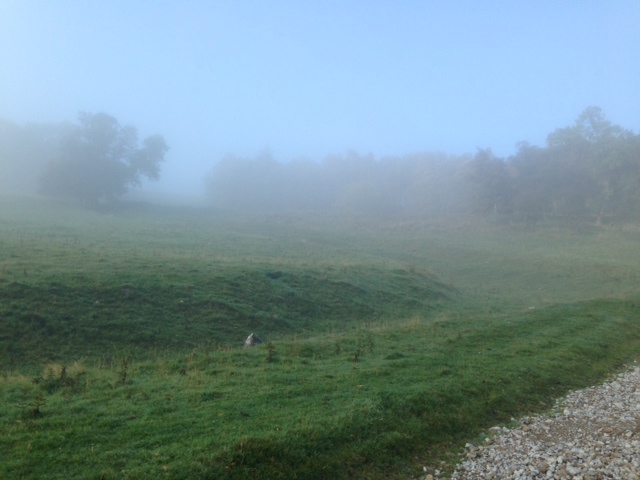 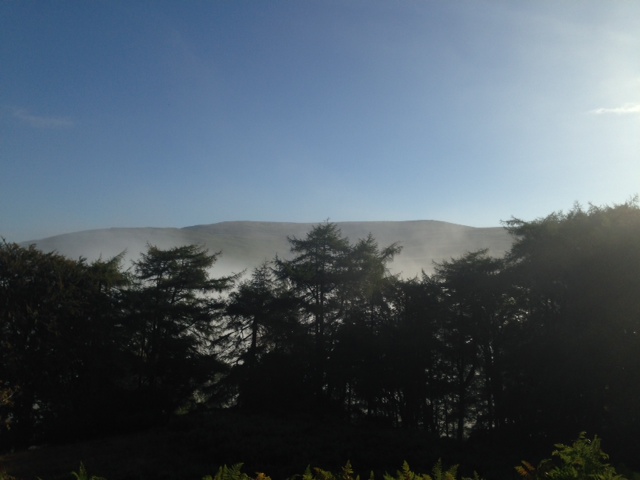 Above the cloud now 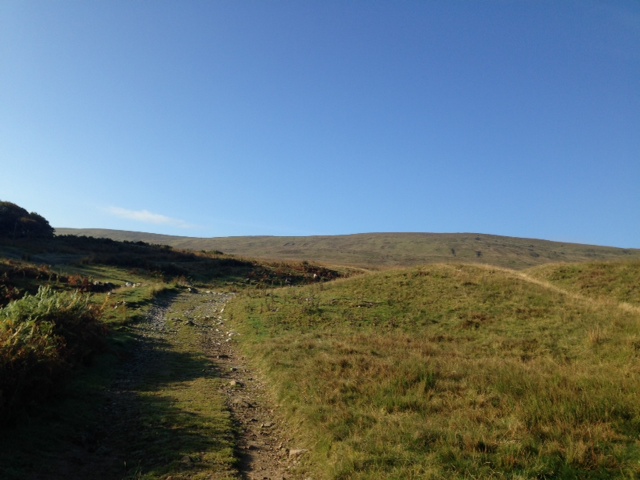 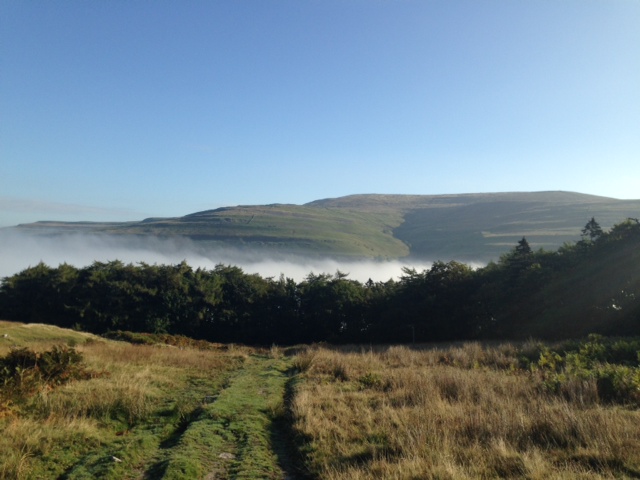 Buckden Pike across the valley 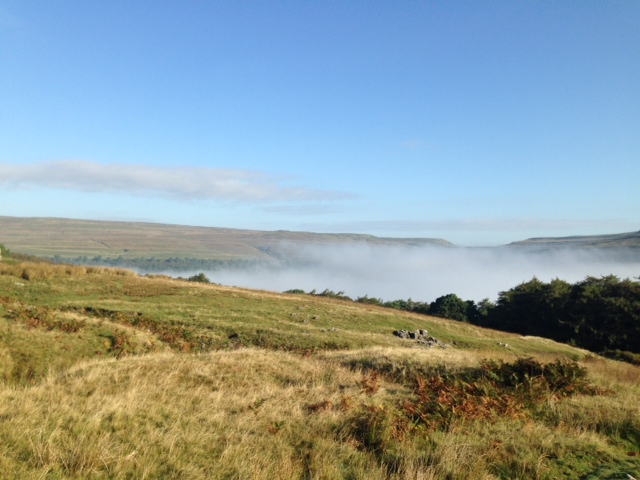 Up until this point the weather had been superb and was showing some real signs of winter arriving. However, it was getting cloudier as I turned to follow the wall that led me past Birks Tarn and up to the cairn on Birks Fell (which stood on some earth that looked slightly man made to me).

I also visited a cairn on the other side of the wall that must mark the high point on the fell according to the map - although there is little difference in the entire ridge from Horse Head to Firth Fell in truth.

I quite enjoyed this stretch of Birks Fell and would imagine it would make a pleasant short walk from Buckden for anybody wanting to do it on it's own (it would almost certainly be quieter than the Pike). 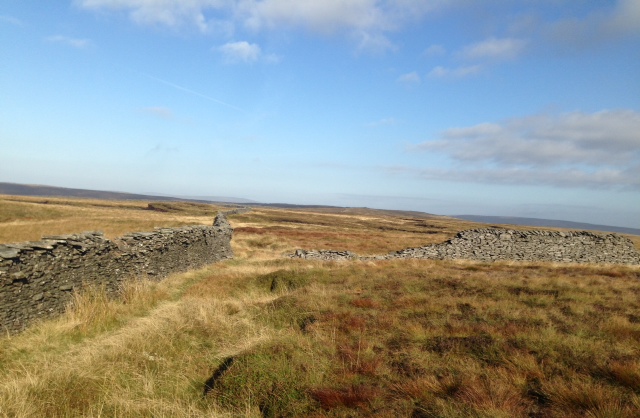 I followed this wall to the summit of Birks Fell 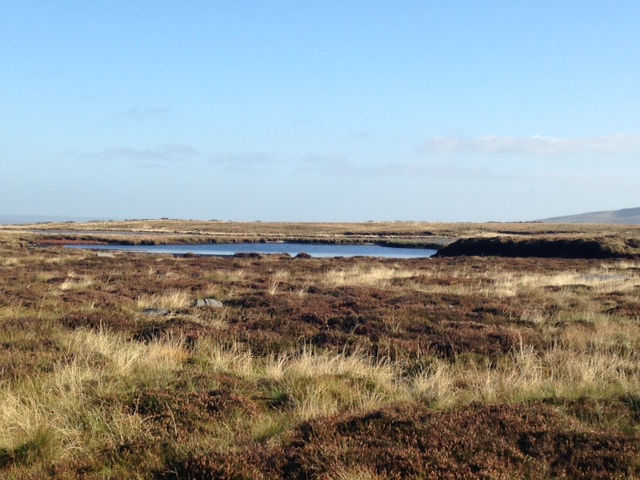 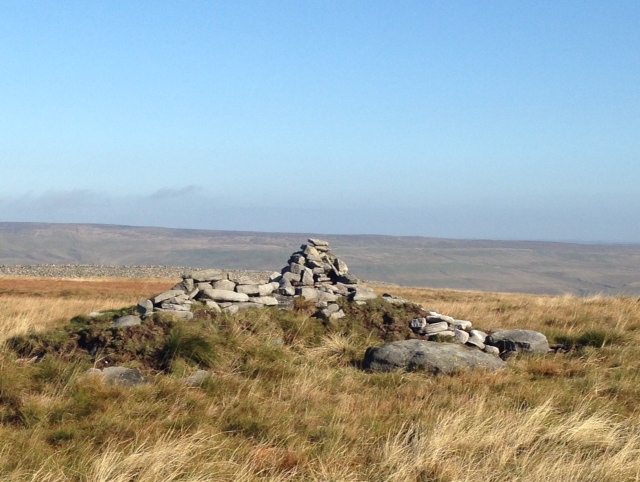 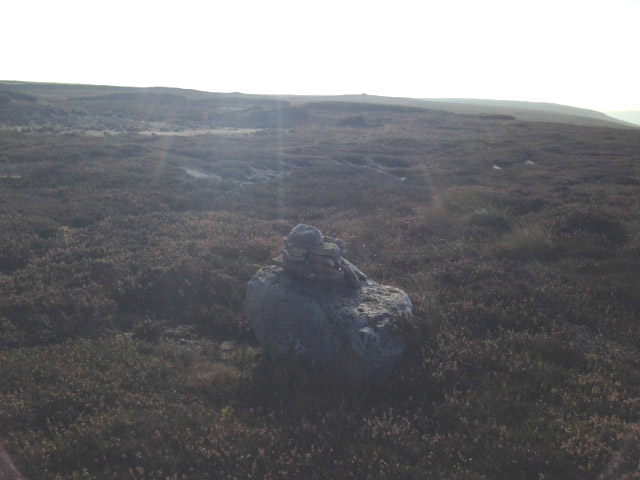 It was now time to take on one of the rougher stretches of the route over towards Horse Head. This was mostly a case of following the fence over a few boggy patches and one short stretch of large peat hags that I suspected would give me a good taste of what was to come on Yockenthwaite.

This was hard work but was over quite quickly and I was soon heading towards Sugar Loaf and the cairn on Horse Head. I didn't get all the way to the Trig Point though as I joined the main path heading right off the ridge towards valley level and Yockenthwaite. 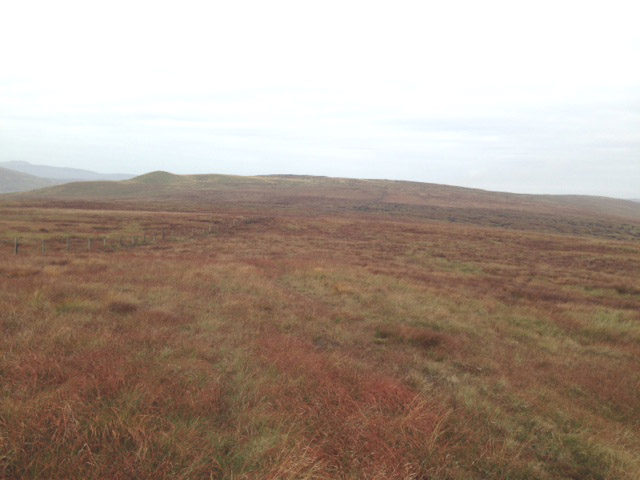 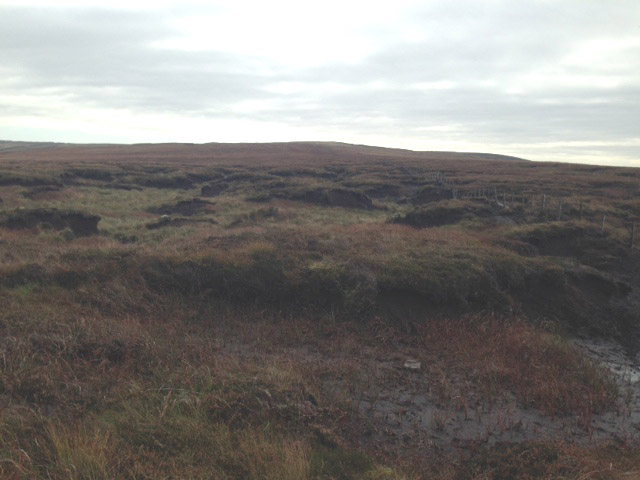 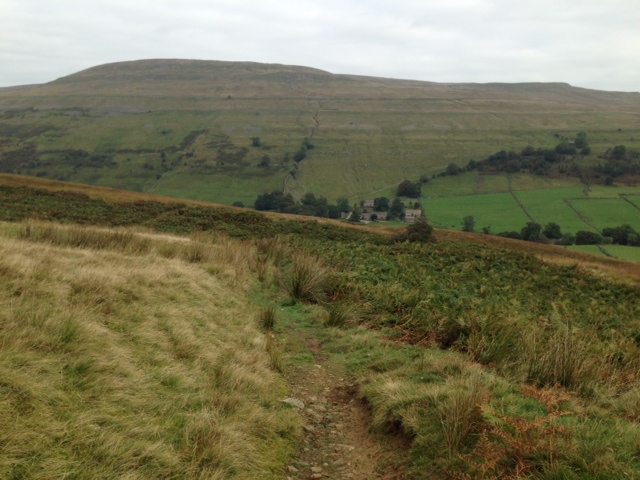 From here it was time to regain the lost height by ascending Yockenthwaite Moor which seemed to have a reputation as either being "not as bad as it is said" or a "truly evil place" according to several reports I'd read.

It was certainly not bad to begin with as I followed the bridleway out of Yockenthwaite and then a vehicle track and then intermittent sheep trails to gain height through a few rocky outcrops.

Eventually I came to the plateau and I was gobsmacked to see several people already on the fell. Surely they all couldn't be walkers?

None of them seemed to be too bothered by my presence but I could see that they were all waving flags and not wanting to cause a problem I decided to make a beeline for the nearest one to me who turned out to be a young girl.

She confirmed to me that they were having a shoot but there was no problem with me being there as long as I went with her to the Summit Trig Point first. I followed her as she easily negotiated the bogs (she was wearing wellies) and soon enough I was at the Trig Point without ever really encountering anything too bad at all - probably mostly due to being more concerned about being shot! 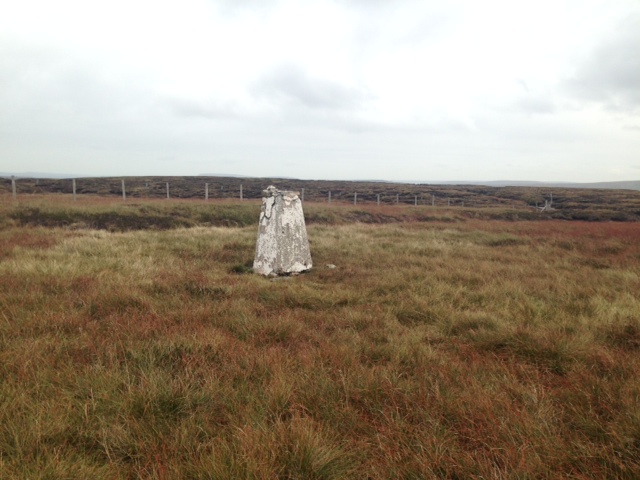 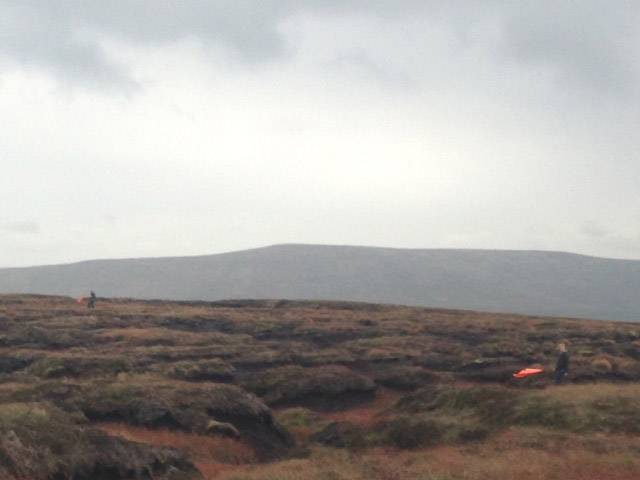 She then asked me which way I was heading off and as I confirmed that I was heading to Gilbert Lane (any idea of not doing Buckden Pike firmly gone in my mind now) and in the opposite direction to the shooters she waved me on my way and I breathed a sigh of relief!

It was now a case of more bog dodging along the peat hags of the Moor as I followed the fence on the top. To be honest all of these hags are negotiable with a bit of leaping and back tracking etc and I must say I've encountered far worse in the Bowland Fells and the North Pennines (indeed the short stretch between Birks Fell and Horse Head is probably worse as well).

A word of warning to anybody following the fence line on the map. There is a junction where several unmarked fences join and it is quite unclear which one to follow. I was lucky enough to have Buckden Pike in view on a clear day so I just aimed in that direction but anybody caught there in mist should probably look to follow the wall on Strans Gill back to Yockenthwaite. 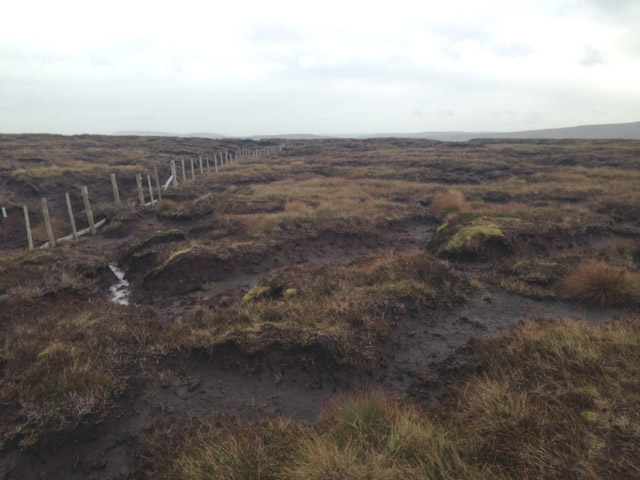 Following the fence off Yockenthwaite Moor

The closer I got to Buckden Pike the better the terrain became and it was with some relief that I eventually hit the really good path at Gilbert Lane which I followed back to the high point of the B6160 road. 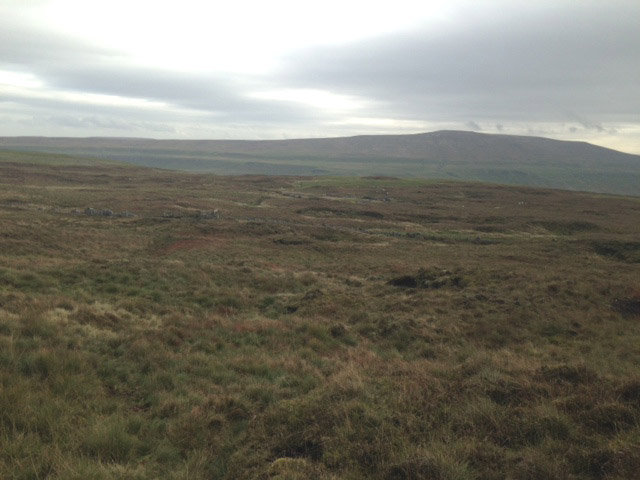 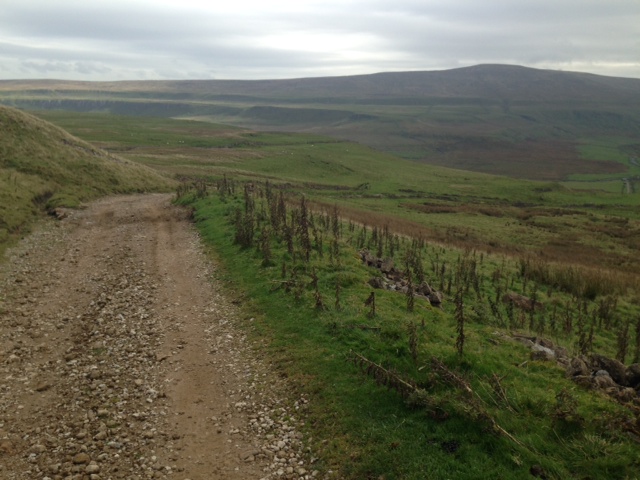 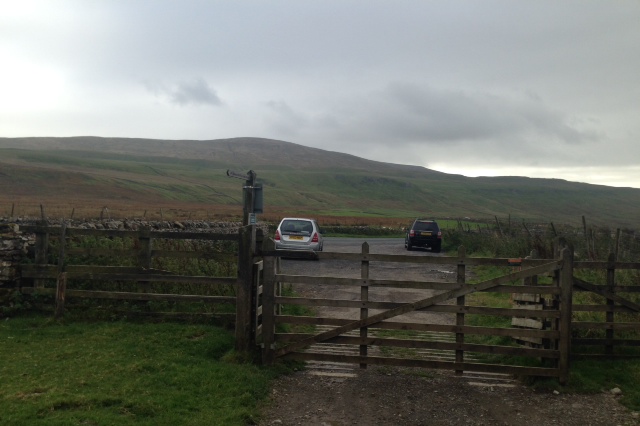 I'd foolishly presumed that there would be a path to climb Buckden Pike from this point but while I could see an odd green path besides a wall I couldn't see an easy way of gaining a foothold on the fell.

Not wanting to lose any more height I took a probably not legal route over a few fences and gates - one which warned of a bull in the field but thankfully I never saw him - to eventually hit the good path coming up from Buckden where I joined a procession of people on their journey to the summit.

From the summit I could see that Yockenthwaite Moor was now engulfed in mist and rain - I wouldn't want to be up there now! 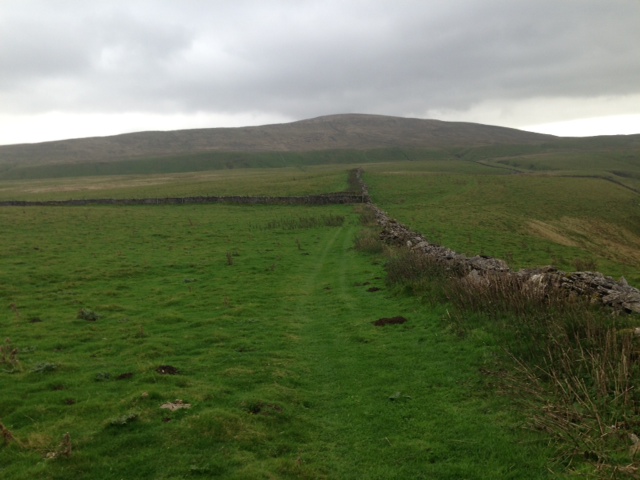 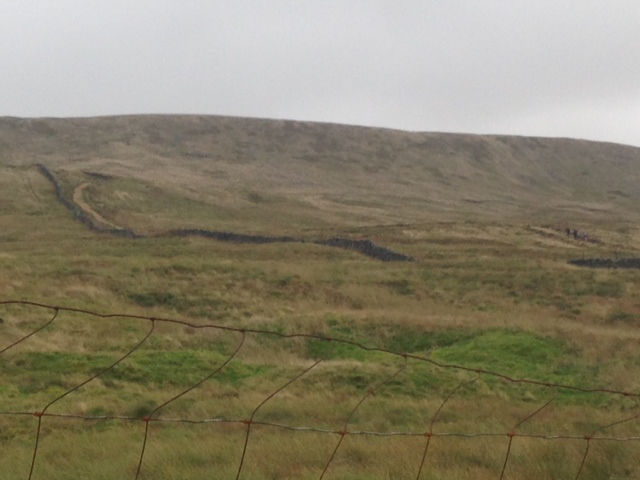 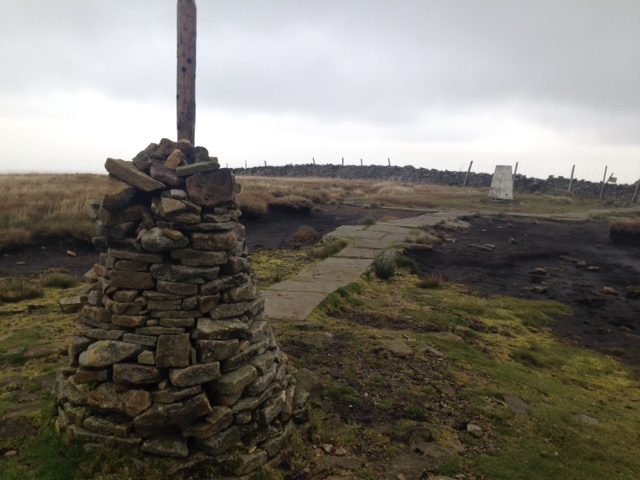 It was now a case of following the good path all the way back down into the Village. 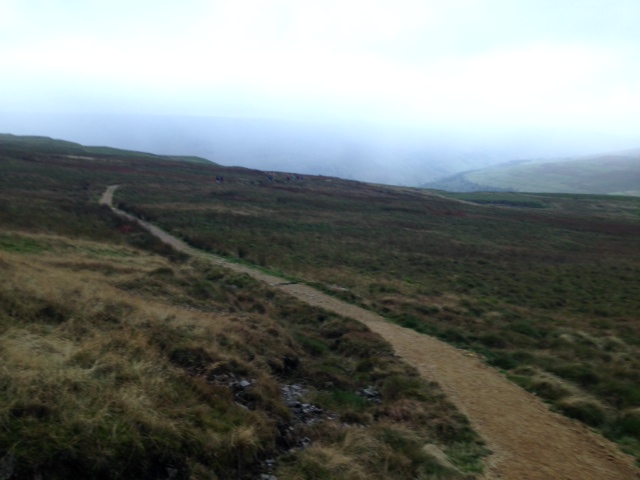 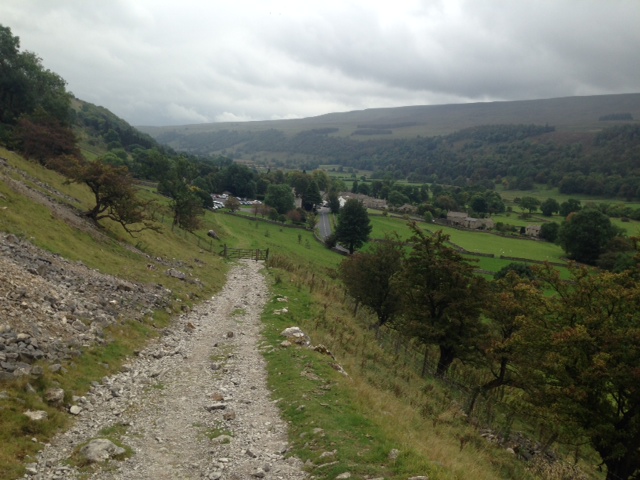 Buckden Rake back into Buckden

A tough and challenging route over some rough terrain but very worthwhile and I got some excellent weather for it (particularly in the morning).

A sterling effort to get those three into one walk, Broggy (especially in only 5 hours

This is probably the right (dry) summer for Yockenthwaite Moor, but I also found the southern approach pretty tolerable, although your way off down the fence looks a bit more daunting... The main path up Buckden Pike is really nice though - and it must be an 'inversion hotspot' as the only one I've ever seen was also below the same hill!

Yeah this is the first time I think I've ever looked down at a blanket of cloud in the valleys although I did once get up and above the clouds on Ben Nevis of all places so I guess I can't complain.

How does Yockenthwaite compare with the wetter places in Wales just out of interest?

There aren't many deep peat-hags like Yockenthwaite (or Kinder/Bleaklow) anywhere among the Welsh Hewitts - the only place that's even at all similar (probably no better or worse and - similarly - there's only a mile or so of the serious hag-hopping to negotiate) is Llechwedd Du in the Arans. The worse Welsh bogs are more often flat & green, grassy-looking but very wet, like some of the outlying areas of the Lakes - quite a lot of the Arenigs are like that, and definitely the heights above the Elan Valley. I wouldn't want to put you off going through the Welsh hills at all though!

Good to know Poppy - I can always check your reports for details on them as well having followed a few of them already (Rhinogs/Cadair)!

Although doing Wales is not really on the agenda at the moment - I would like to finish the Dales off and then maybe the Pennines next year while slowly ticking off a second round of Wainwrights - although I do enjoy an odd trip a year over there and as you mentioned in another post there are some of the very best hills in the Country there (Tryfan, Snowdon, Cadair etc).

Looks a great walk, I'd love to do a bit of walking in the Yorkshire Dales some day, looks a good area to enjoy walking.

Sarah86 wrote:Looks a great walk, I'd love to do a bit of walking in the Yorkshire Dales some day, looks a good area to enjoy walking.

Sorry I'm a bit late answering this one, Broggy. It's a lovely area around Upper Wharfedale and Langstrothdale.

Sarah86 wrote:Looks a great walk, I'd love to do a bit of walking in the Yorkshire Dales some day, looks a good area to enjoy walking.

It is indeed. Get yourself here, Sarah.

I did Yock fell from the North which wasn't too bad. In the mist the summit was a god forsaken place. Even the promised tarn (Middle Tongue) shown on the map failed to materialised having given up the ghost and dried up. It's a top that has to be done as it's "on the list". A Return is very low on the priorities.