Having Friday and Monday off, the plan made several months ago was for a camping trip to Moidart. Circumstances dictated otherwise – still trying to shake off a cough and cold ruled out Friday and a poor weather forecast for the north west suggested Moidart wouldn’t be ideal. Shorter walks seemed a better option hence a late change of plan to head for the Braemar area.

Drove up past Perth then via Blairgowrie and parked in the wee layby (on the left just north of the Spittal of Glenshee) beside another car. The driver asked for directions to Aberlour (fishing trip) – seems his satnav took him up this way rather than the A9.

Got ready and walked on the wee track to the side of the road round the corner to the gate where the main track starts.


27-SEP-14 01.gpx Open full screen  NB: Walkhighlands is not responsible for the accuracy of gpx files in users posts

Further up turn to the right and on to the summit 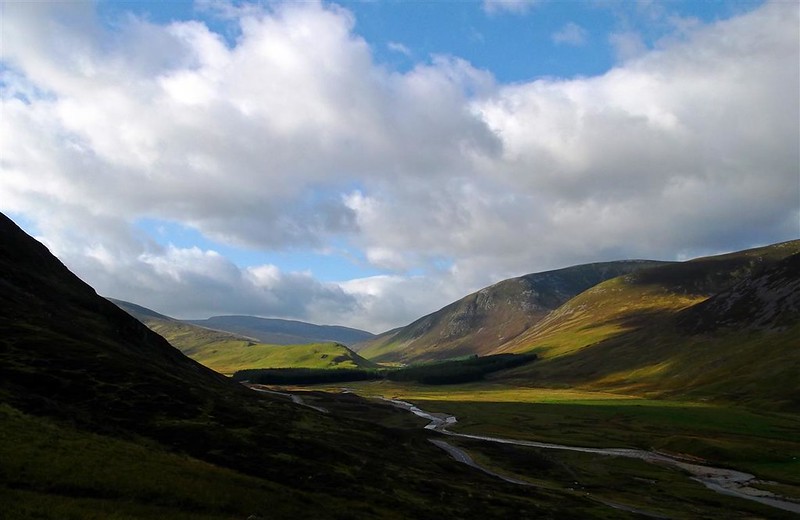 Back to the car then drove up past the ski centre and stopped in a layby just south of Newbigging.

There are various ways to approach this hill including the walk up by Callater Burn. Most straightforward seemed to be from the roadside.


27-SEP-14 02.gpx Open full screen  NB: Walkhighlands is not responsible for the accuracy of gpx files in users posts

Walked back down the road a little to what looked like the start of a track. Didn’t really come to much so just kept going through the heather with some rocky sections on the way.

Towards Braemar and Morrone

Weather staying reasonable - wind getting up at times

Back at the car, stopped for a break and some early lunch. Then drove up to Braemar and round to the Linn of Dee – satnav wanted to take me up the old military road then across the Victoria Bridge to Mar Lodge – didn’t seem quite right. Still some spaces in the car park at Linn of Quoich.


27-SEP-14 03.gpx Open full screen  NB: Walkhighlands is not responsible for the accuracy of gpx files in users posts

Set off around the same time as a few other walkers – think they were heading towards Allanmore. Headed towards a gap in the trees (middle of the photo) then found a track leading up the hill towards Carn Dearg.

Continually lost and found the track on the way up

Reasonably clear but windy at the top

Drove back round to Braemar. Stopped to text home and have a break and some more lunch. Then drove to the car park just past the bridge at Auchallater.


27-SEP-14 04.gpx Open full screen  NB: Walkhighlands is not responsible for the accuracy of gpx files in users posts

Walked along the roadside initially then crossed down to the bridge over the Clunie Water. Then left over another wee bridge, alongside the fence then up to pick up the main track up the hillside.

Patterns on the other side of the A93

Higher up turn right towards the summit

Mar Lodge and Linn of Dee

Descended the same way – Auchallater and car park in the distance

Back at the car park I met a walking party – they had been on four of the munros to the east of Glenshee, had walked back down Jock’s Road and were waiting for their tour bus.

Now just after 5pm, had an initial think about heading down to Auchavan for Monamenach as it was turning into a nice evening. However, it would take a wee while to get there and I’d probably end up walking back in the dark so decided to leave it until the following day.

Little in the way of parking spaces so parked just past Auchavan on the potholed road which leads to Dalhally – beside the river before the bridge.


28-SEP-14 01.gpx Open full screen  NB: Walkhighlands is not responsible for the accuracy of gpx files in users posts

Set of early before dawn initially with a head torch. Back up to Auchavan and past the houses. Found the track but initially missed the shortcut to the left – then across the field, on to the main track and followed it up the hillside.

Lots of deer on the skyline but with hardly any light the photos are blurred. Stags bellowing on the hillside. Followed the track until it ended, turned right and headed up to the summit.

No sign of it clearing so headed back down. Cleared a bit lower down.

Auchavan to the right, car and bridge to the left

Looking brighter over to Badandun Hill

Back to the car with the weather looking reasonably promising. Hardly any wind. Drove down the road to the end of the Fergus farm track and parked on the verge leaving the farm road clear.


28-SEP-14 02.gpx Open full screen  NB: Walkhighlands is not responsible for the accuracy of gpx files in users posts

Followed the track through the farm, up through the tress then on to open ground. Went further up the track until finding a suitable place to cross.

Then up the hillside through the heather

Nearing the top, the mist rolled in and the rain had started.

No views at the top

With the rain getting heavier, decided on a more direct route back down to the trees above the farm.

Still raining and misty as I got back to the car

Back at the car it was now just on 10am. Had hoped to go on to the two Grahams, Mount Blair and Mealna Letter (Duchray Hill). Waited a wee bit but there was no sign of the clag and rain clearing. Drove down the road to where the Mount Blair route starts – still raining and very misty – couldn’t see any of the tops. Had absolutely no wish to start either of the walks in rain/clag, see nothing and return in rain/clag so decided to leave them off.

Changed into dry clothes, drove home. Needless to say the weather cleared up considerably near Blairgowrie and was very nice around Gleneagles. Back home in time for lunch – meant I could watch some of the golf and miss the traffic on the A9.

That's an impressive bit of serial bagging, RH, lots of ascent on Saturday.
I love those shots from Morrone of the stripes of light and darker green foliage - really like camouflage paint on the hills.

Really enjoyed this, haven't been to Braemar for over a year now and I really miss it. Good to see your photos, The Mar Lodge Estate is something special

A good 2 days bagging there RH. All nice short walks these or long hard ones if you combine them. Good stuff, cheers

Pity about the last two, rockhopper, a good haul nonetheless and you've given me a few ideas...again.

Having a little chuckle/cry at the directness of your Monamenach route, as it brought back memories of doing this back in January when set off from the Compass outdoor Centre with the intention of doing Mealna Letter as well but, wasn't feeling great and walked around Loch Beanie, almost to your start point! (up between Craigenloch and Creagan Caise Hills), to ascend Monamenach. Was really toiling in deep snow on the way back and took me about 8 or 9 hours all in by the time I reached the outdoor centre. Somehow mustered enough energy for the drive home but, broke out in a fever on return and ended up in hospital that night with a virus that was attacking my joints and ultimately messed-up both achilles'.

Can smile about it now but, if I do manage to get out this winter, I'll be taking more direct routes

Good report, I haven't seen many reports of those hills. I like the idea of combining shorter walks into 1 or 2 days.

Tick, tick, tick, great stuff! That must be a different experience for you, considering your munro bagging reputation

: a trip that lasts only 1 hour and 6 minutes! Makes sense to do lots of those in one day

. Shame the weather didn’t co-operate on Sunday for more bagging.

Nice one RH, no slacking for you

Quite a bit of planning involved, you must have had the maps out

Good effort rockhopper - done all of these except for Carn na Drochaide. Morrone may not be the most attractive top with all the masts but on a good day the views north are just brilliant.

Hope you enjoyed the golf, watched every shot over the 3 days (the only sport that can keep me away from the hills).

That's what I call life after compleating. Definitely something to look forward to; it's great to have a reason to revisit the Braemar area.

Looked a good weekend. Hope your cold/manflu has cleared up.

thats what I call ticking hills off! Well done for the round of hills...impressive! Can't say I was ever done by 10am on a Sunday