Was trying to save this one for emergency's, but forecast looked ok for Killin area and less good for other hills I had in mind, so Meall Ghaordaidh it was to be. Was a bit later in the day when I got to Glen Lochay. Parking spot was full, so had to opt for an alternative lay-by. The WH guidance was quite handy, keeping me on correct route up by the Allt Dhuin Croisg, then onto the hill, by the small cairn.
It was quite a steady hike, but not the steepest. Unfortunately, despite being warm and wind free, the views were obscured by a considerable haze, however the pleasant September meant the bogs were virtually dry. Imagine it could have been a very different story on a different day. Nearing the rockier, upper section of the hill, I found myself on a good path, drifting more to the ridge on the NE side, yet people were descending from the SE. It wasn't too far, or too difficult to traverse round that way, to give myself more reassurance, though I was tempted to keep to this track and find my way to the top from wherever it led me. Enjoyed the climb up to the top, which took 1.6hrs. I was greeted by a lady who enquired where I had just come from? It transpired she and her partner were a bit conflumoxed as to where they were. After convincing myself I was where I thought I was, I spent a wee while convincing them and they were just a little surprised to find out, it was not Stuc an Lochain! Having done a 'wrong hill' before, I didn't feel too smug. 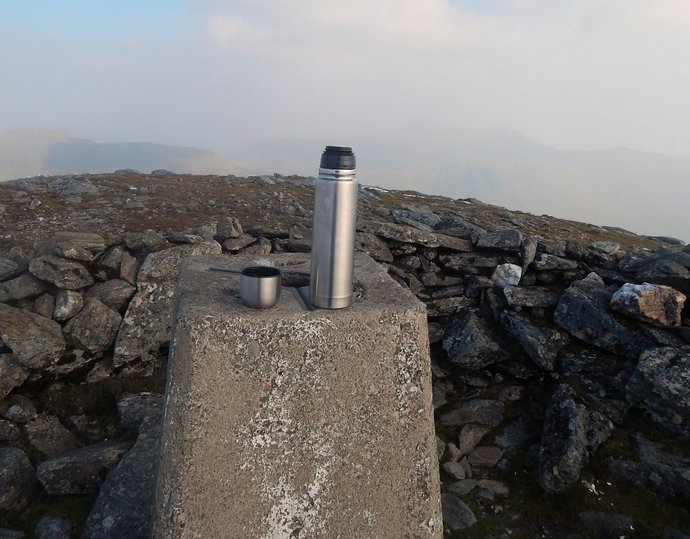 A couple of hazy photo's, a drink and then it was back by much the same route, taking a hasty three hours, altogether. Not my most memorable hill, but I'm sure on a clear day, the views would have been braw. A feint, hazy and somewhat distant Stuc an Lochain. A feint, hazy, distant me?

September has been a dry month but a non-view month, either in clag or very hazy, but that is the penalty for no rain

Good stuff! I can recommend going back on a clear day and tackling it from Glen Lyon.

Thank you, Martin. The couple who were 'on the wrong hill' had come up that way. Certainly seems to be the more "classic" route. Me? I'm just looking for an easy ride! (and to keep my camera, ha ha!) Am watching post re Grey Corries, but don't think it would work out for me.

I did this 2 days before you on a Saturday and had the place (and car park) to myself....
Mind you, I did set off at sunrise so it may have got busier later.
The views from the top were fantastic.

Aha, the early bird gets the early parking space, Kaye! And, the good views - most of the time! It would also have been relatively dry for you, too. Looks like the wets stuff moving in now, unfortunately.

I like your pics of the final summit climb. I did this one back in January with a fair bit of snow about, so its good to see your pictures and work out what lines I took through the crags.