This had really been my last chance to get a walk in during September, the rest of which had been taken up by holiday in Portugal (can't complain, but limited hill-bagging opportunities), on-call commitments and then a 30-year school re-union on the evening of the 27th

- a memorable occasion that went on til 5:30 a.m., but which obviously ruled out the 28th for a walk

. Even by the 29th I couldn't summon up much enthusiasm for an early start, and I also had the complication of having to pick up my wife from Edinburgh Airport at 8:30 p.m. (she'd been visiting our eldest in Oslo while I'd been re-unioning). I therefore settled for a wee two-bagger fairly close to home, doing the relatively obscure Corbett Beinn Stacath plus its wee Graham pal Creag Mhor.

our_route.gpx Open full screen  NB: Walkhighlands is not responsible for the accuracy of gpx files in users posts
I started at the fairly ample car park at the end of the public road at Ballimore Farm, then crossed the bridge over the Calair Burn by the ongoing private farm road, but turned off immediately right on the small Public Footpath signed to Brig o' Turk - the footpath sign is visible in the photie below. 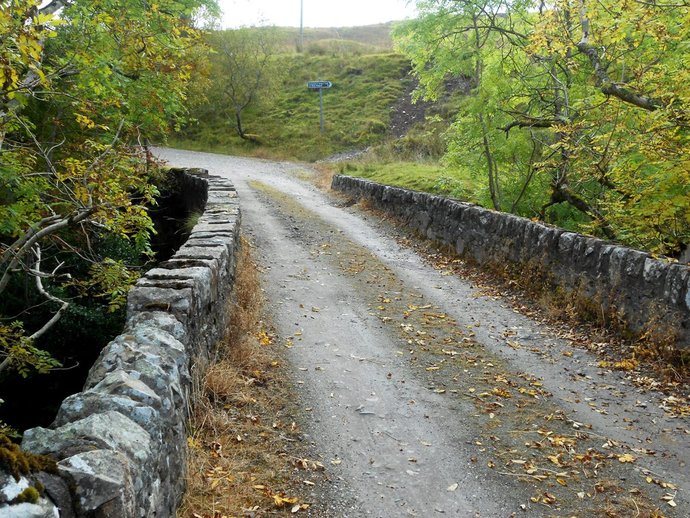 From what others have posted, this footpath can get fairly squelchy after heavy rain, but it actually wasn't too bad today and gave better going than I'd expected. There were some lovely autumn colours around, and Creag Mhor was looking a shapely wee hill from here, somewhat pointier than I'd expected it to be. I followed the directions in Brian Johnson's useful recent Cicerone guide on "The Corbetts", sticking with the footpath until shortly after it took a swing to the south, where a bridge over the Allt a'Ghlinne Dubh becomes visible over to the west. 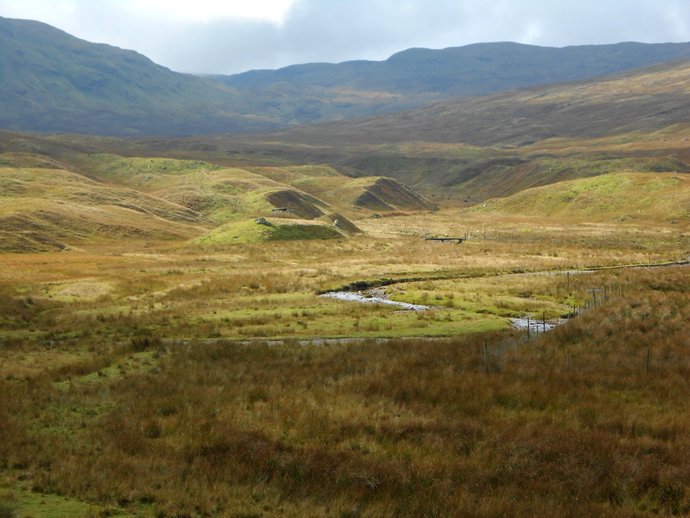 I headed more or less directly for this bridge, which involved fording the southwards branch of the Calair Burn en route - possible without wet feet on a dry-ish day like today, but it could have been tricky in spate conditions. Before long I was at the Allt a'Ghlinne Dubh bridge, which is roughly at GR508165. From the bridge, Bein Stacath almost manages to look pointy

, but this is of course deceptive - this is only a minor east top, Point 684, and the main summit is notably flat. 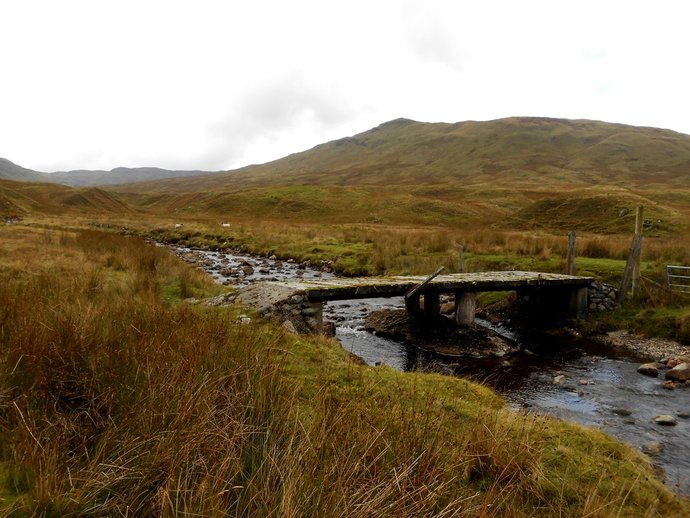 It was a bit of a slog from here up pathless and relatively steep grassy slopes onto Stacath's broad east ridge. Once up on the ridge, however, the going improved immediately, and there were some good views back down over the Gleann Dubh. 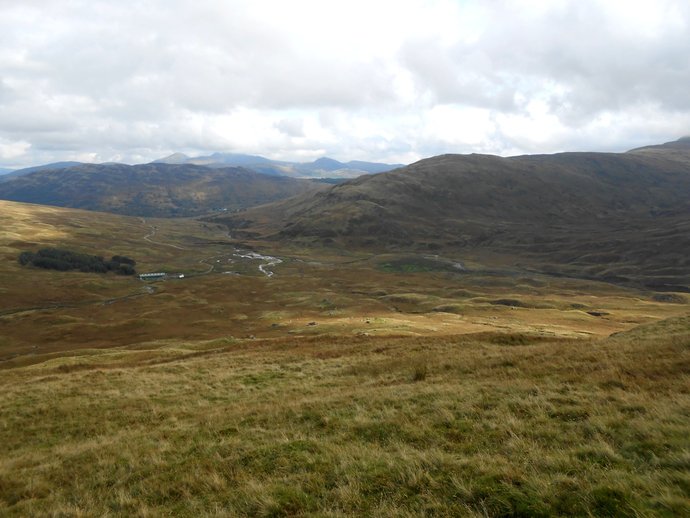 Creag Mhor was looking good from this angle, pleasingly dappled with patches of sunlight. 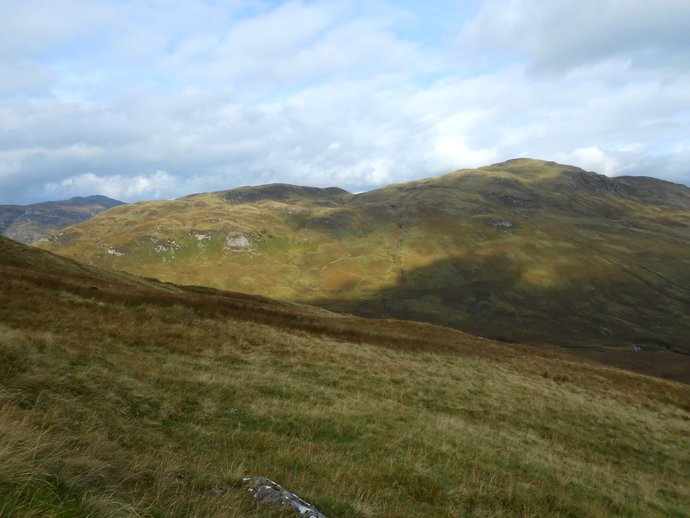 I encountered a fairly large stag on the way up - there is a deer farm to the south. He eyed me suspiciously for a while before sauntering off northwards, but he didn't seem quite such a sensitive soul as the farm's signage would suggest 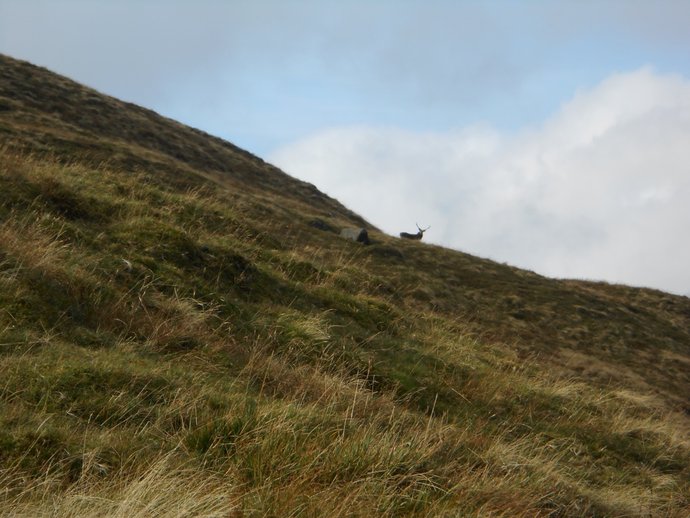 Stacath's broad east ridge is pathless and undulating, but the grassy terrain gave fairly good going, and it wasn't long til I was at the summit trig point. Time for the obligatory silly auto-timer shot! To be honest, this was largely unintentional: I'd initially planned to sit on top of the trig point but the maximum time delay on my wee Nikon Coolpix is 10 seconds, and that just wasn't long enough to get up properly, leaving me stranded like a seal on a rock

- ah well, I include this one for potential entertainment value. 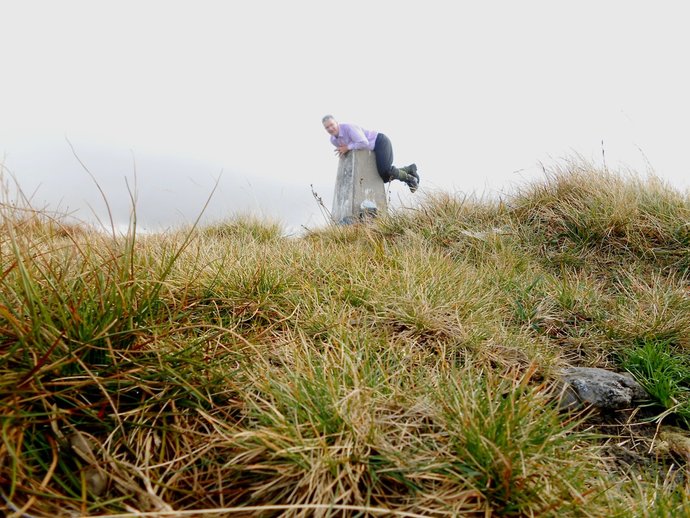 Time for a fairly leisurely lunch break while I appreciated the views. The weather had been improving steadily, and although the Munros to the north and east still mostly had their heads in the clouds, Stacath managed to provide a pretty good summit panorama. 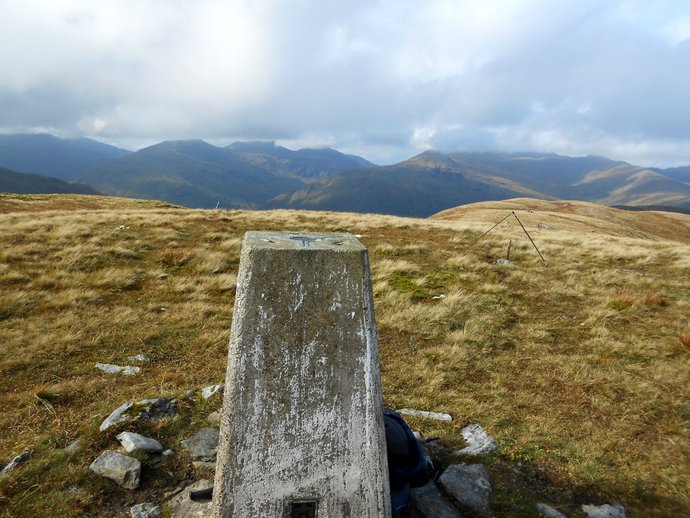 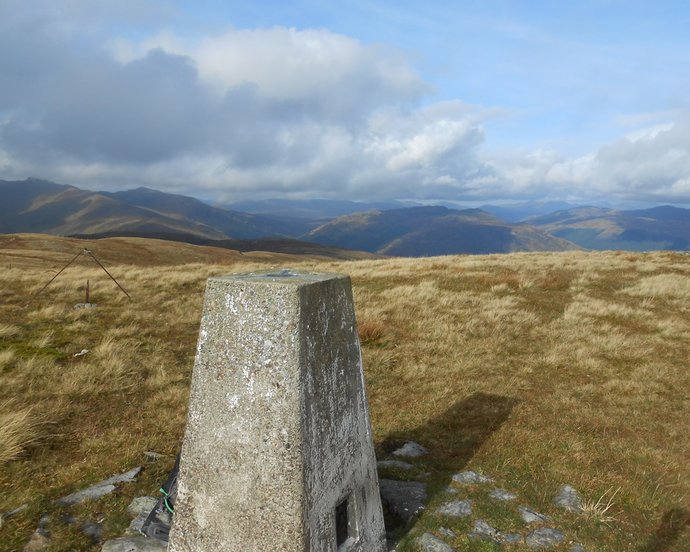 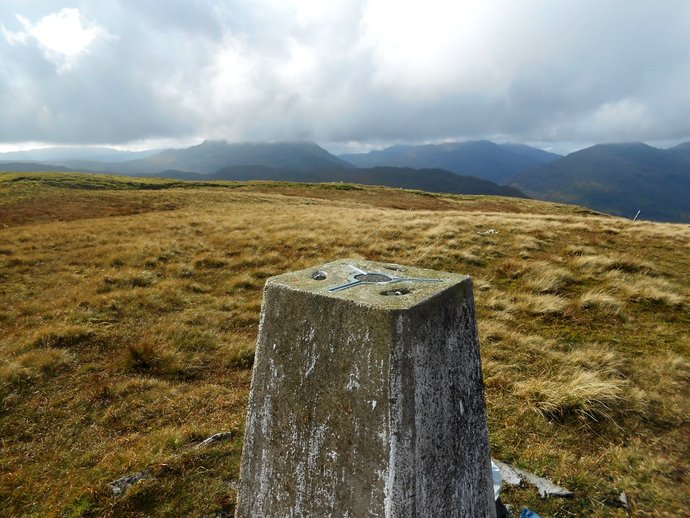 To be honest, I was starting to like this hill. It doesn't have a particularly good rep, and it is admittedly something of a shameless heap of a thing, but on the other hand it is very handy for the cities of the central belt and it turns out to have a lot more going for it than I'd expected. In fact, I hereby initiate a campaign for the rehabilitation of Beinn "Boring" Stacath into Beinn "Fairly Interesting" Stacath. A few things that may make this hill moderately interesting:
1. It is an International Man of Mystery - it goes by at least three names, and no-one seems to be able to agree which one to use. The SMC gives it the official name "Beinn Stacath" ("Pointy / Peaky Hill"), and this is also the name used on the walkhighlands website. However, it is widely known locally as "Stob Fear-Tomhais", "The Surveyor's Peak", presumably because of its trig point - this is the name used in Brian Johnson's Cicerone "Corbetts" book for instance. To confuse things even further, Alan Dawson's "Relative Hills of Britain" refers to it as "Ceann na Baintighearna" or "Her Ladyship's Head", although the OS map clearly uses this to refer to the northern Top at GR471178 rather than the main peak at GR474163. Apparently it even has an older fourth name, "Meal Aonach", the Mound of the Ridge. Would the real Beinn Stacath please stand up?
2. It may be a rare example of overt sarcasm in mountain nomenclature. "Beinn Stacath" seems to mean "Pointy Hill", more or less, yet the main summit brings to mind pancakes, doormats and other such similarly pointy stuff

...
3. Its summit may be only slightly pointer than the average pancake, but it does have a rollicking broad ridge extending northwards to Ceann na Baintighearna and then extending eastwards towards Creag Mhor, which gives an enjoyable romp of a descent route, with grand views northwards over Loch Voil and Loch Doine. 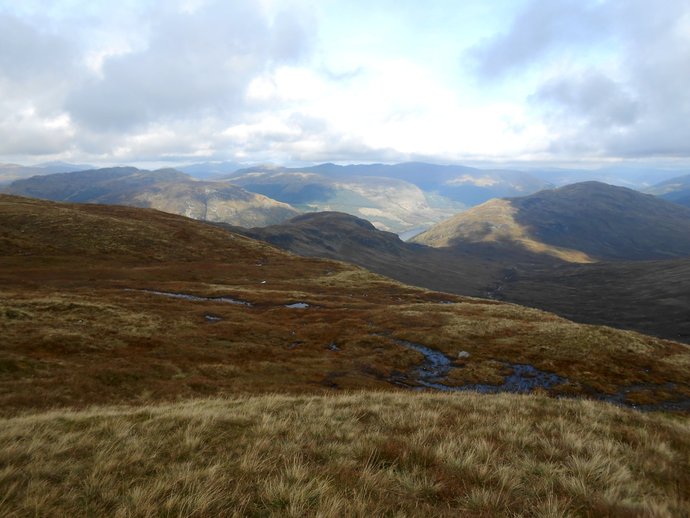 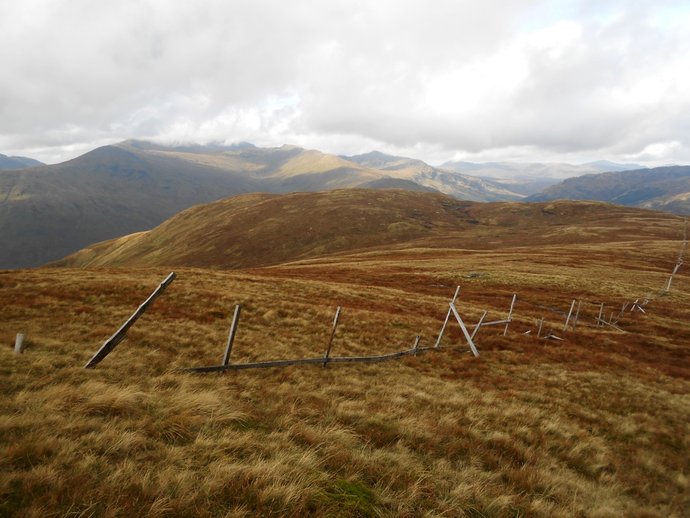 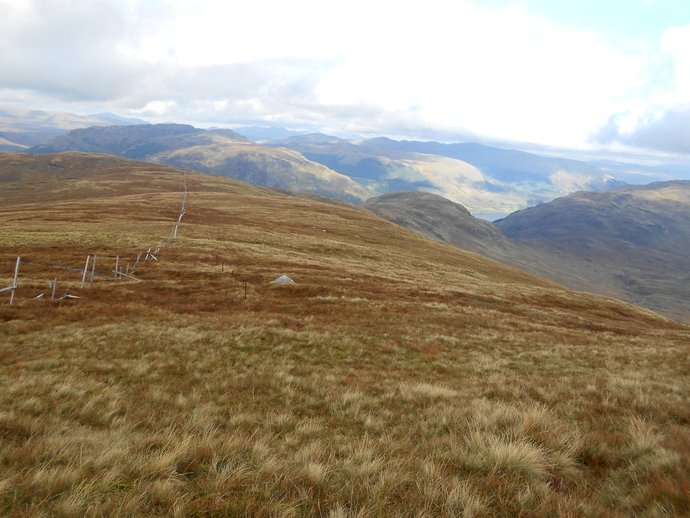 4. At this time of year, it is home to a substantial population of giant hairy caterpillars. These really are rather impressive: here's a close-up of one. Anyone care to hazard a species? Anyway, I had plenty of time to ponder Stacath's many unexpected merits as I stomped merrily down aforesaid broad ridge, northwards towards Ceann na Baintighearna at first, and then eastwards to the bealach with Creag Mhor. There were some mildly craggy sections en route, but these were all avoidable by sticking fairly close to a line of fencing, which would be handy for navigation in poor visibility. 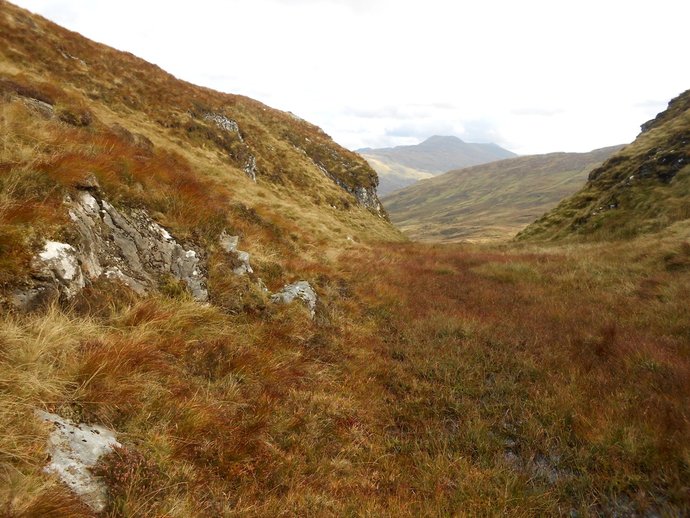 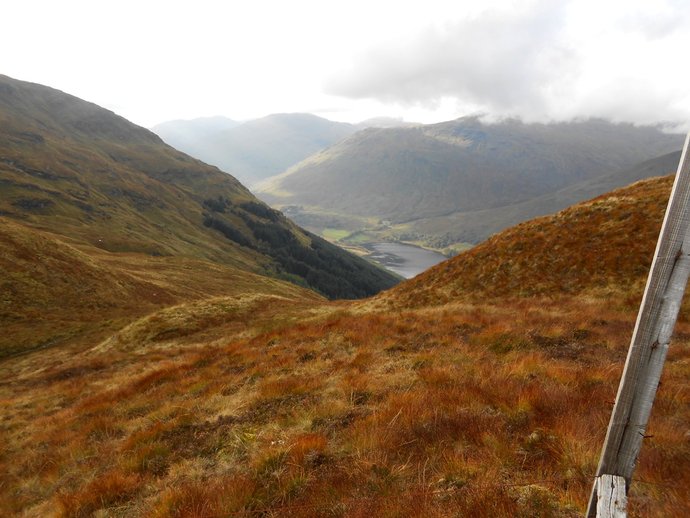 The descent to the bealach with the Graham was through relatively steep bracken, but at least the fine autumn colours provided some distraction. 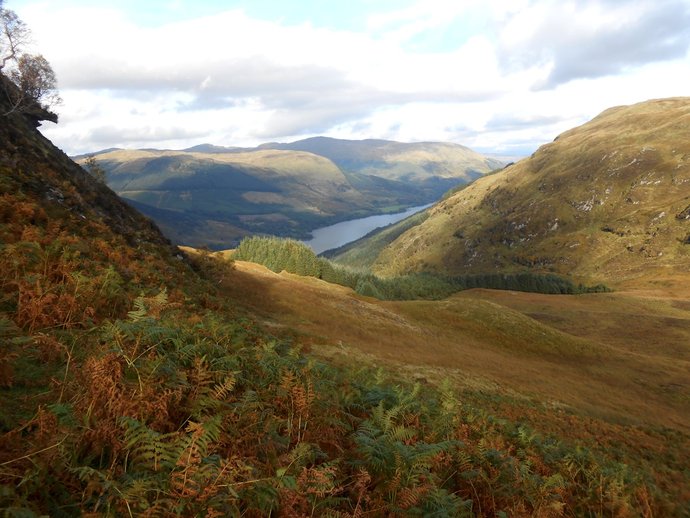 Whatever one's views on Beinn Stacath, its wee pal Creag Mhor is undeniably a Fine Wee Hill, being a well-defined cone with some entertaining minor craggy bits. There was a good view back towards Ceann na Baintighearna on the way up its west ridge from the bealach: 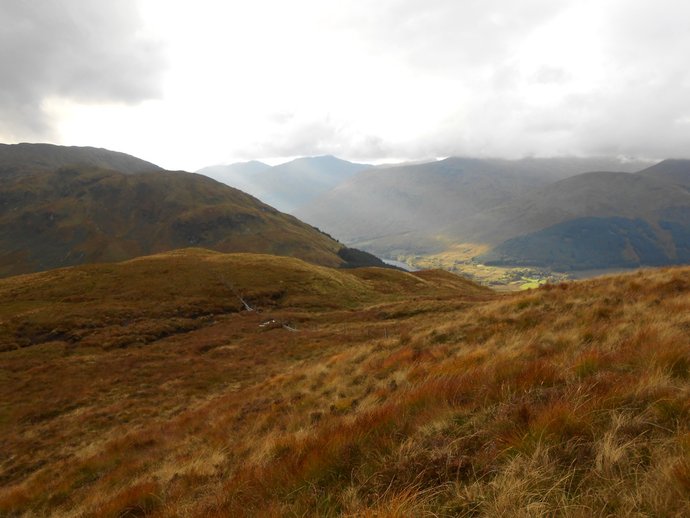 A bit higher up, I joined a line of fencing which goes almost all the way up to the summit, and which again might be navigationally handy in poor visibility. 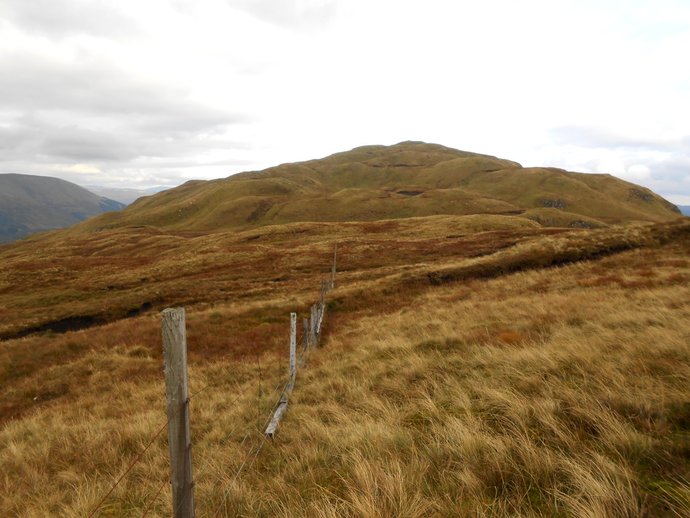 It wasn't too much further from here to the summit, which turned out to be a rather cute wee cairn perched on top of a large boulder. Thankfully I didn't attempt any further auto-timer shots up here... 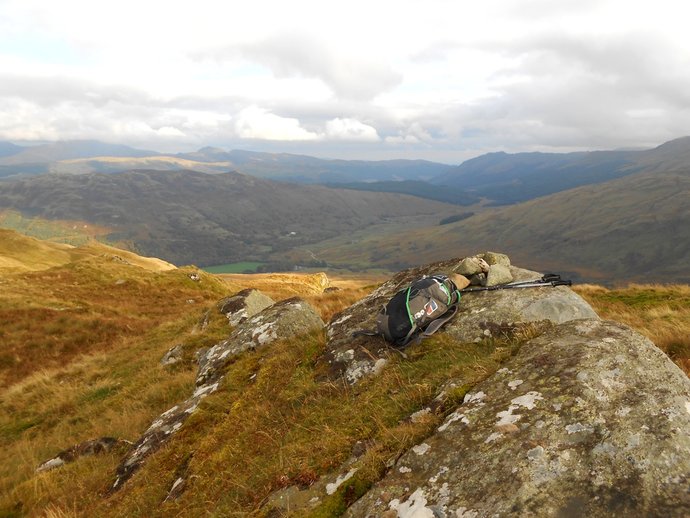 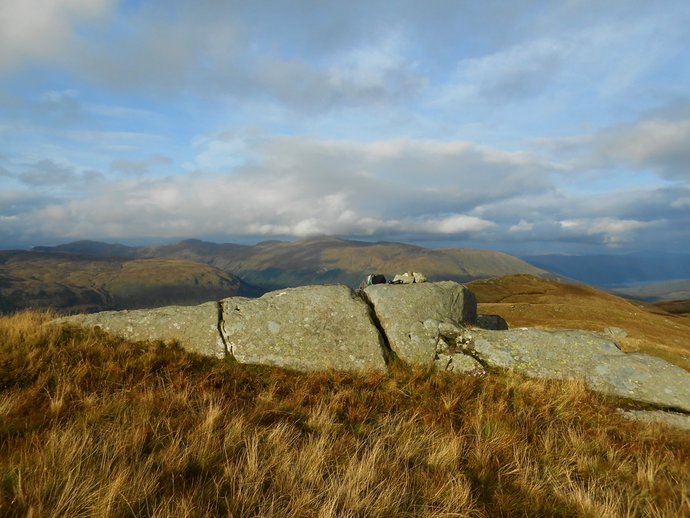 Rather than plod down the rocky and undulating east ridge, the easiest way down from the Graham turned out to be to take an early right-hand turn just east of the summit, descending the grassy gully of the burn that starts around GR508185. 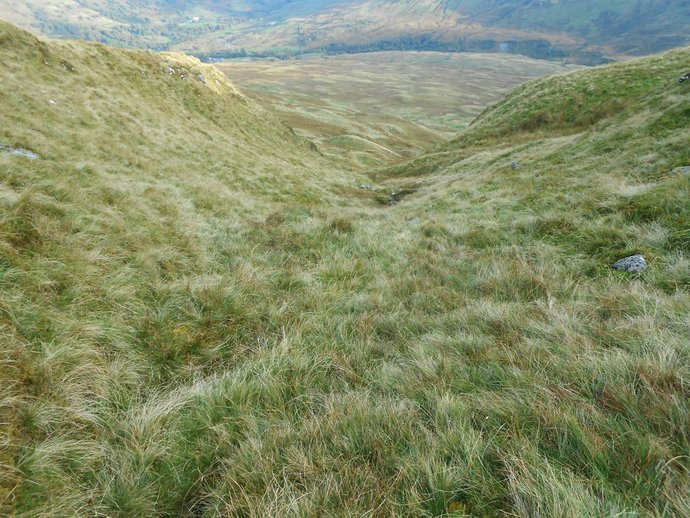 This gave a straightforward route all the way back down into Glen Buckie, joining the track to the north of the Calair Burn just before the high gate in the deer fence with the famous warning sign about the Sensitive Deer. On the way down, there was an interesting view back up to Creag Mhor's southern crags, which presumably give this hill its name. 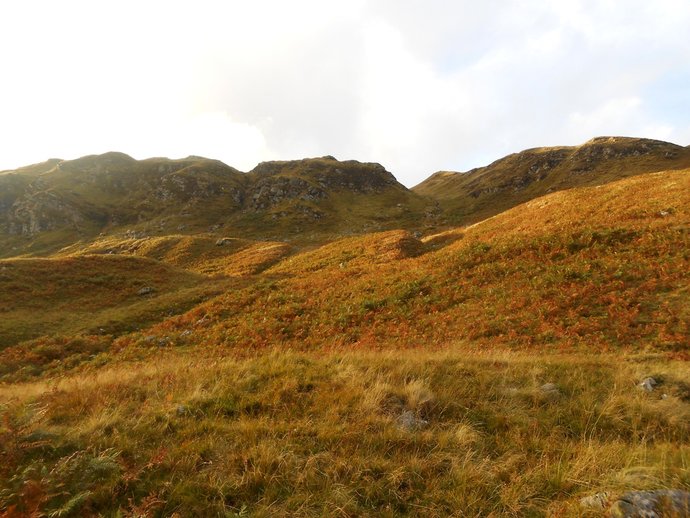 A surprisingly entertaining half-day's route this, and very handy for Glasgow

Looks a topper ,wee ones are sometimes the

Aye, it was an unexpectedly grand wee walk! As you say, the smaller hills often give a better walking experience, especially on those "rare" days

when the Munros have their heads in the cloud...

Nice wee walk, with the lovely autumn colours starting to come through.

Great report of some nice hills, did the same route myself earlier in the year.

bobble_hat_kenny wrote:At this time of year, it is home to a substantial population of giant hairy caterpillars. These really are rather impressive: here's a close-up of one. Anyone care to hazard a species?

Pretty sure your hairy caterpillars are the larvae of the Fox moth. They seem to be having a good year judging by the sheer number of them I've seen in the hills recently.

No sign of stalking ? I did Creag Mhor on the 19th Oct. a couple of years ago and bumped into a shooting party who said I couldn't go. However, they turned out very nice and showed me an alternative route when I went all pathetic on them and said "I told my husband I'd be on this hill so in case I didn't come back, he'd know where to find me." I obviously must have looked the sort that MIGHTN'T come back.