After our rather cloudy day on The Ettrick Horseshoe the previous week, I was hoping for better weather/views on our next outing, the forecast was for some low cloud in the morning, but clearing early afternoon onwards (heard that one before!) so it was with some optimism we set off from the rough carpark at the bridge upstream from Talla Linns. There was a fair bit of cloud, but it was covering the hilltops, so we were alright on the lower levels. We crossed the bridge and started along a rough quad bike track which goes up the easy north side of Molls Cleuch Dod, with views across to Nickies Knowe to the left, although we couldn't see the top because of the cloud! Three quad bikes with farmers/shepherds and loads of dogs running beside them passed us on their way down off the hill while we made our way up, one stopped and the driver quizzed us about our intended route, nothing bad...I just think he was wondering why anyone would want to head up them there hills, he warned us about the thick fog, and told us to be careful before heading on his way down the track. We found a fence which we followed up past Talla Craigs and which then headed west, on a gentler gradient than before, the cloud at this point started to come and go, so we caught glimpses of the hills around us. We stayed next to the fence a wee bit longer than we intended and found ourselves at the bealach between Molls Cleuch Dod and Carlavin Hill, so a bit of doubling back brought us to the top of Molls Cleuch Dod, where there were two small cairns, one next to the drystane dyke, and another a few mtrs away from the dyke, we went to both...just in case!
From here it was simply a case of following the fence/drystane dyke towards Firthybrig Head and onwards to Donald's Cleuch Head, still following the fence. From this stretch of the walk we could see over to Lochcraig Head, and The Eildons a....w....a....y in the distance. Heading (roughly) east along another fence took us to the summit of White Coomb, where we stopped for a quick bite to eat, with views across to The Ettrick Horseshoe, we could easily pick out Ettrick Pen and the path down through the forestry to the Phawhope bothy. We retraced our steps back to the original fence, and made our way downhill to the dreaded Rotten Bottom (I wasn't looking forward to this bit!) negotiating the peat hags wasn't too difficult, it was the (in some places VERY) boggy bits in between, Ian stuck to the fence and made it safely across, I, on the other hand, decided to cut diagonally across and head up the short steep slope on the other side. this proved to be an unwise move as I ended up having to double back a couple of times, I eventually made it across but next time I'll stick with the fence!
Ian and I met up and swithered about tackling Under Saddle Yoke and Hart Fell, but felt we should maybe leave them to another day, when we get round to tackling the Hart Fell Horseshoe proper, and so we continued on to Cape Law and Din Law, where we stopped on the rocky outcrop for our second lunch, overlooking Gameshope Loch, which apparently is home to some large wild brown trout, thanks for that Google! The low cloud had all but lifted by now and we had decent views down to Fruid reservoir and beyond (I've never seen so many wind turbines, I'm all for renewable energy but.....!) we could see across the A74 to the Leadhills area and Lowther Hill with its distinctive "golfball" on the summit. For much of the walk we could hear, and then see skeins of geese passing overhead, presumably Pink Footed, on their way to the Solway Firth, must've seen over 1000 in total.
It was a steep descent to Ellers Cleuch where 3 Raven were making their presence known by cronking loudly, a steep descent, usually means a steep ascent and so up we went, soon reaching the plateau top of Garelet Dod, our final Donald was in sight so we cracked on, still following that fence, to Erie Hill. It's a fairly steep climb up to the summit, but it didn't take too long. We looked across to Garelet Hill, but decided to call it a day and make our way down to Gameshope Burn, find a place to cross the burn and join the track back to the main (if you can call it that!) road, and then back to the car. This descent was really steep, in hindsight we perhaps should've zigzagged our way down, but we found a fence (HURRAY for fences!) which we used along with our walking poles to steady ourselves, and we soon made it down to the burn, a safe crossing point was found a few metres downstream, so we reached the track and were back at the car in no time...well actually, it was about 40 mins!
A good days walking, some of the hills are pretty steep, so give the leg muscles a good workout, the views when the cloud finally lifted were cracking, worth the wait!
Some pics of the day...... We cross the bridge and follow the track to the left. Garelet Hill is at the back in the cloud. Ian and the fence we followed all the way round...pretty much! Still quite cloudy! 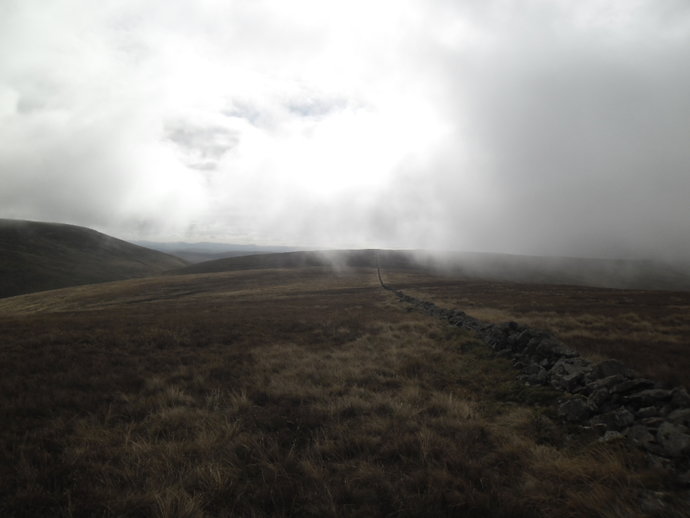 Drystane dyke heading into the distance from Molls Cleuch Dod. Our only glimpse of Loch Skeen 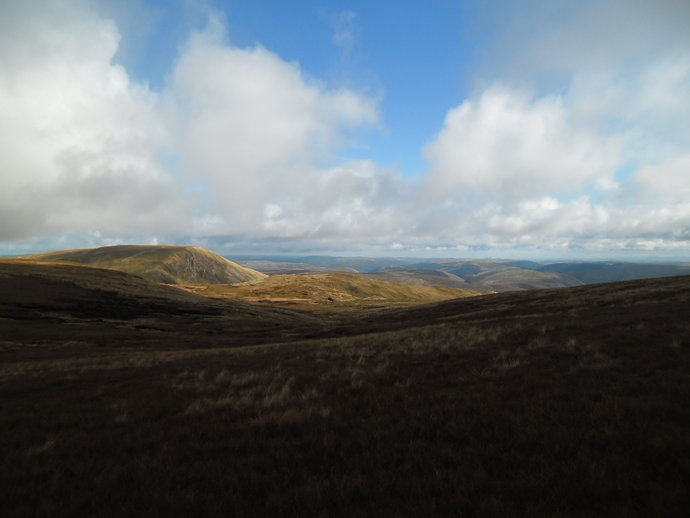 Lochcraig Head on the left and you can JUST make out The Eildons on the horizon, just to the right of centre! Approaching Rotten Bottom with Under Saddle Yoke to the left. YAY! I made it across Rotten Bottom! Looking across to Falcon Craig and the far side of the Hart Fell Horseshoe. The rocky outcrop on Din Law, time for lunch #2. A safe place to cross! The descent and the fence we hung onto, doesn't look steep but it was! Looking back along the farm track. The farm, with Talla Cleuch Head to the left. A rather overcast Talla Reservoir

Good to get out into some local hills again, many thanks to Ian for planning the route and providing transport!

Re: 5 Donalds from Talla Reservoir

Cheers for this, i think i will follow this route for the 4 Donalds. When i did White Coombe i didn't even know Donalds existed.