Geal charn, A´ Mharconaich, Beinn Udlamain, Sgairneach Mhor.gpx Open full screen  NB: Walkhighlands is not responsible for the accuracy of gpx files in users posts
These hills had been looking very tasty from across the road yesterday, especially Sgairneach Mhor’s elegant north facing corrie. The munro bible describes them in two separate trips, but they seemed to be well doable in one day. It would mean a 4 kilometer walk back on tarmac, but that should be fine. I parked at Balsporran. There was one other car in the car park.

An Torc was looking very fine from the car park. 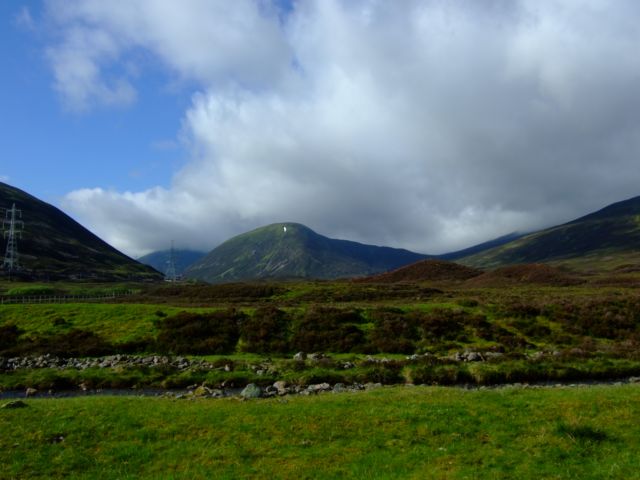 So, past the B&B, from which some lovely breakfast smells were escaping, across the railway up along the track. 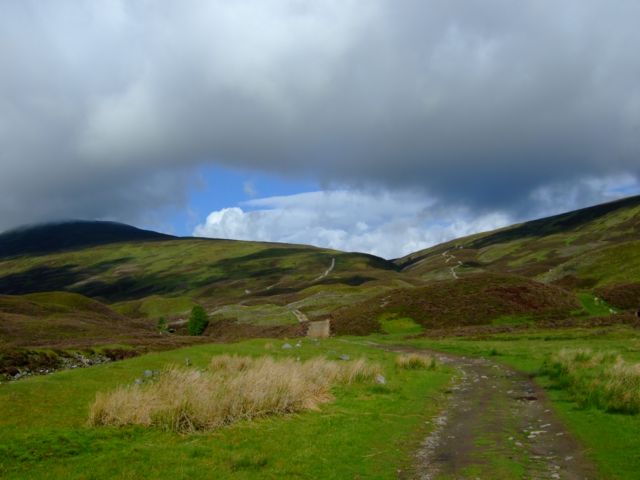 Turning right at the second fork. It was pretty good going for a while, until the track hit the bogs. As usual this improved higher up, typically where the track stopped. On the plateau I looked back to the ascent route and saw two walkers in the distance, they seemed to be walking fast. But for me it would now be easy going, so they weren’t going to catch up just yet. Does anyone else get competitive in the hills?!

Good views of the Drumochter Pass. 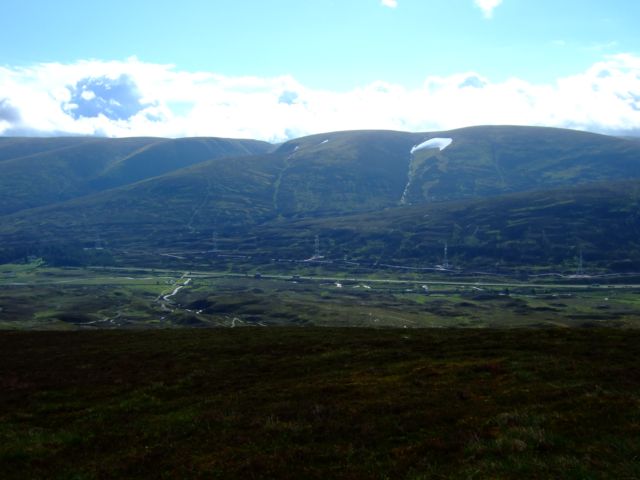 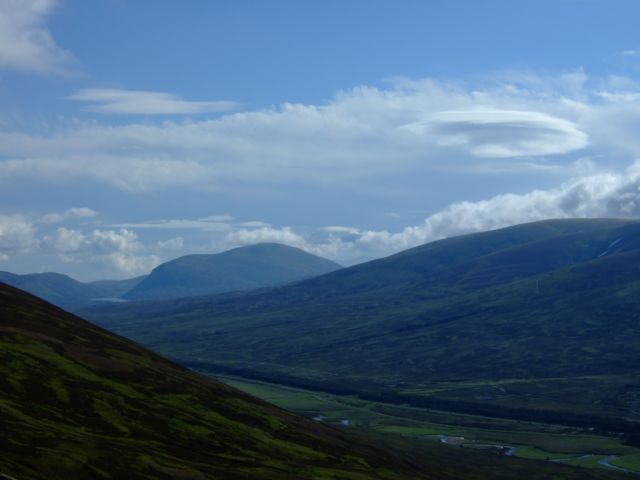 On the summit of Geal-charn I walked past the first cairn, which seemed to be the higher one, straight to the second cairn, which had the benefit of a windshelter. It was too cold for not moving in this wind. Having made myself comfortable in the shelter I ate a sandwich and goggled at the stunning views across Loch Ericht to the Ben Alder hills. I must return, I must return! 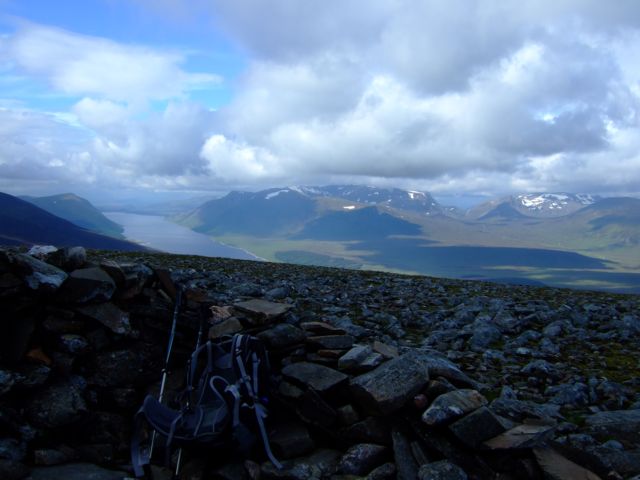 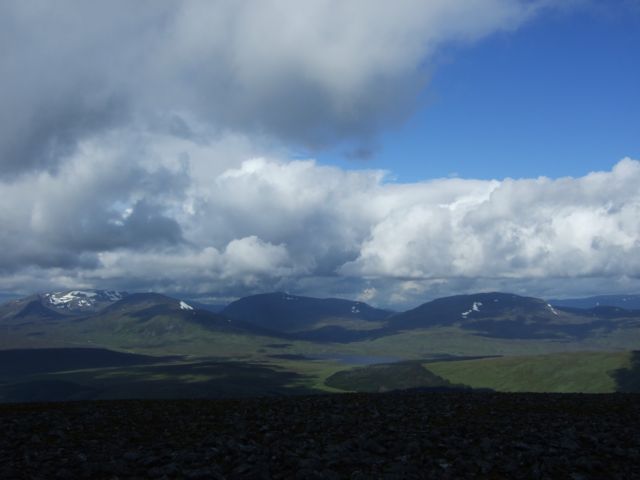 View towards Carn Dearg, Beinn a' Chlachair and Creag Pitridh

It was then more easygoing down gentle slopes. The other track from Balsporran cottages came in from the left near the bealach, but unfortunately didn’t continue in my intended direction. On the upside, there were more good views of the Ben Alder hills. 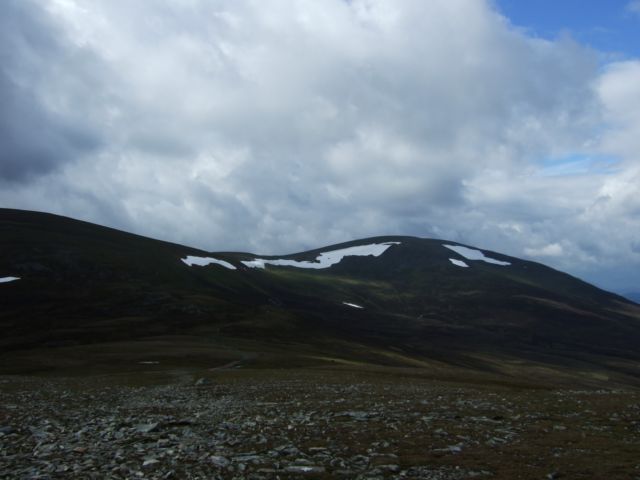 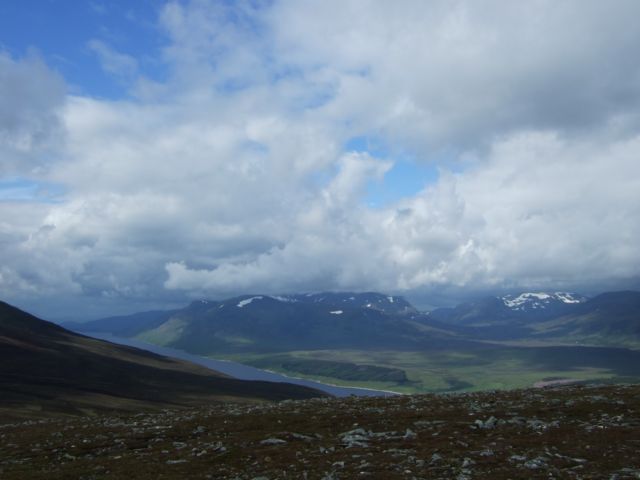 I picked a route uphill in a SSE direction and then came across a path. Looking back towards Geal-charn, the two walkers were now approaching the bealach. Goodness, how did they do that?! I couldn’t help myself and upped the pace a bit. They were hot on my heels and then took a short cut across Coire Fhar. OK, that would be rougher than my route, so I might still arrive at the summit first!

Honestly, it’s your holiday, not a race!

They arrived at the slight dip on the summit plateau just before me and steamed ahead. It would be weird to keep walking 5 meters behind them so I jogged to catch up and we arrived at the summit together. Not that it was a competition…. 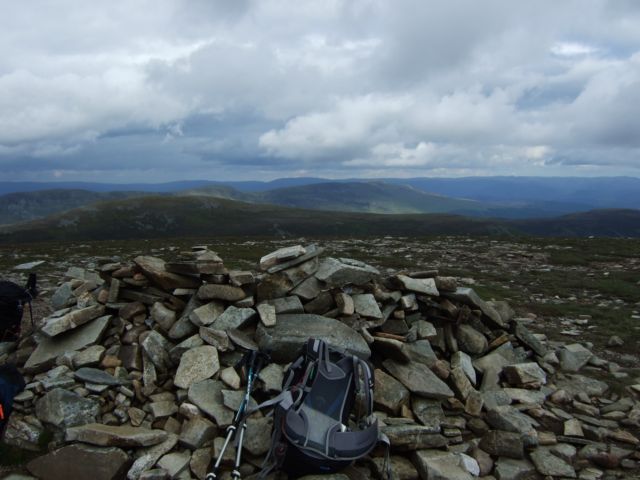 They were two guys from Glasgow, one of them training to do the West Highland Way in a day. Ah, that explained the brisk walk. They were taking the mick out of themselves by comparing their preparation for today’s trip. One had calculated energy expenditure, based on distance, ascent, pace, and had carefully selected foods that would top up the calories. The other one had had a rummage in his loft this morning, found some army rations and thrown them in his bag.

We continued towards Beinn Udlamain together whilst chatting, but I had to let them go at the 861m bealach. My legs were far from fresh after 11 days of bagging and with still 3 days ahead of me, I thought I’d better save them a bit.

So, back to my leisurely holiday pace up on easy slopes. It didn’t take long before I got to the summit of Beinn Udlamain. 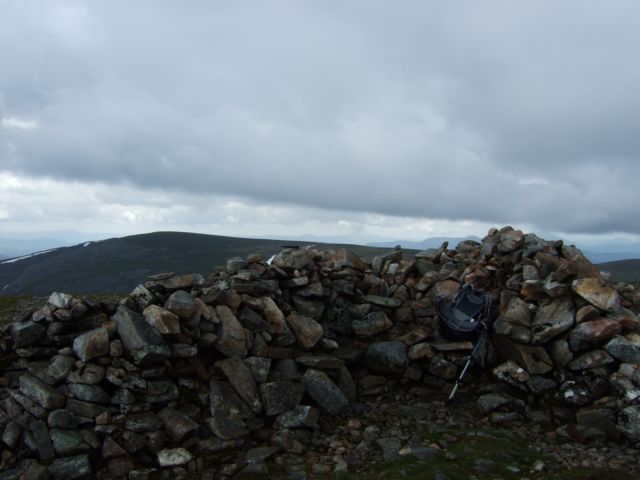 The view towards Ben Alder was getting a bit obscured by bad weather but judging from the wind direction Sgairneach Mhor should stay cloud free for a while. The two other walkers had disappeared out of sight. 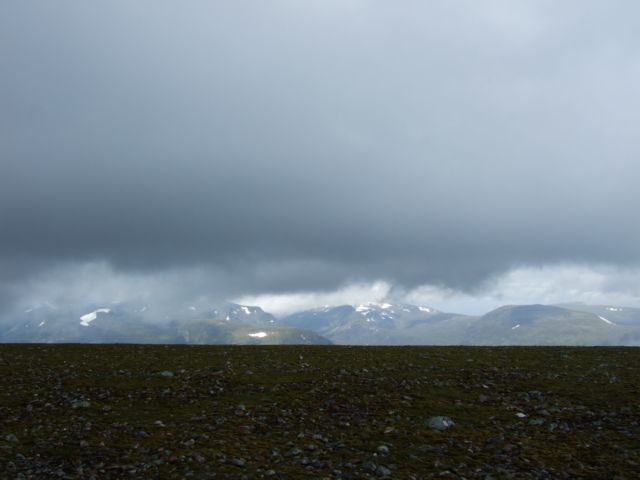 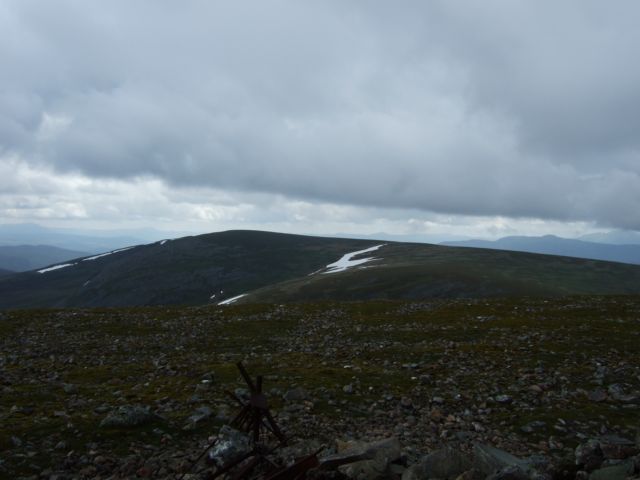 More easy slopes down and then up again to the final munro for today. I could get used to this! 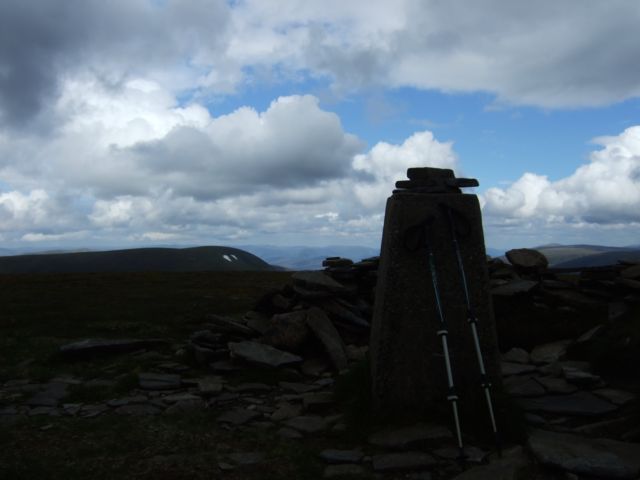 At the summit the wind shelter came in very handy again for admiring the views whilst having a short break. Once more, easy slopes down with great views of Coire Creagach. A light drizzle had started and this was a cue for putting on the waterproofs. It didn’t last long, but I couldn’t be bothered taking them off again, which later turned out to be a good decision. The original plan was to head for the track that crosses the Allt Coire Domhain at NN608748. This was not visible from high up, but I could see a bridge 1km further east. So I headed for the bealach just before the 758m hump, skirted the hump and then went down its NNE ridge aiming for the bridge. There was a path (well flattened heather that is) most of the way. It got a bit boggy lower down, but I’d had worse. At one point I underestimated the firmness of a heathery tuft, it collapsed, my heel slid from underneath me in a classic banana skin slip fashion.

One leg in the air and splat! A soft (and wet) landing in the bog. Thank god for the waterproofs! Covered in mud I continued the descent. At the river some old fashioned laundering was done and then the waterproofs were hung out to dry on my rucksack whilst I made my way down the track. 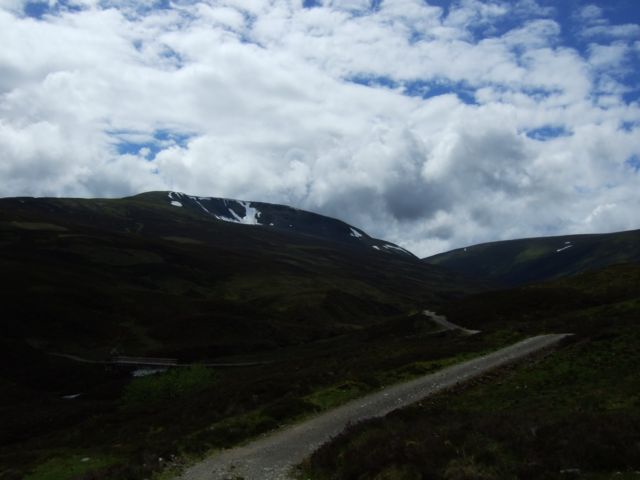 On the track, looking back to Sgairneach Mhor. Bridge in the bottom left.

The track was not too rough or steep, which is always a bonus at the end of a day’s walk. Just before the tunnel

A hairpin bend led through a tunnel to the other side of the railway and then onto the cycle path, which I had all to myself. The cycle path is a bit lower than the road. So even though the road is near, the 4km walk back was quite pleasant. All in all a good day, with four easy hills and great views. It's a nice round starting high and you do get some good views down Loch Ericht.

Can remember taking the bike to cycle up to Balsporran but probably not worth the extra hassle esp as you noted the walk's OK. Wondered if you'd though about adding on the corbett, the Sow of Atholl, at the end ? - cheers

That looked a cracking day Silverhill. I did the same route in July and it's one of my favourite days this year. Very underrated hills. I think I took the same stalkers path down through the heather around the Sow of Atholl, but in hindsight I do wish I had tagged it onto the end of the walk like RockHopper mentioned. I was short on time to get home and also thinking about saving my legs for the walk back up the A9. But as you said, the walk back is actually okay and having slipped down the boggy heather covered stalkers "path", I doubt it would have taken much longer to go up and over the Sow

Love the colours in your pictures, you had some great views across Loch Ericht

Another good day you got there in Drumochter

Looks a good walk. We did a far shorter walk in the same vicinity last summer and really enjoyed it.

Thanks rockhopper and SecretSquirrel!
I hadn’t planned beforehand to do the Sow of Atholl as well, but did briefly consider it whilst skirting the 756 hump. In the end I didn’t for the same reason as SecretSquirrel: the 4km walk back on tarmac. Which turned out to be not bad at all. I suppose I haven’t got the Corbetts that firmly on my radar yet. Maybe that will come when I have finished the munros.

Thanks Johnny Corbett and litljortindan!
They are easy hills and on a good day make for a very pleasant walk. Ideal for legs that are getting tired!