A report on my very first munros, Ben Macdui and Cairn Gorm…


Ben_Lawers (2).gpx Open full screen  NB: Walkhighlands is not responsible for the accuracy of gpx files in users posts

I was nervous for a number of reasons; my first munros, my first solo hill walk, and I also had no prior knowledge of the area. So I decided it was better to be safe than sorry and popped to the Rangers office to sweeten them up ready for the inevitable rescue attempt later that afternoon. They immediately sent me off to the (slightly grumpy) lady in the shop for an OS map and compass and I went back to the Rangers who told me to put my phone in my bag and leave it there. ‘Phones aren’t for navigating!’ That was me told. Though I weakly indicated that phones were for taking pictures and, you know, ringing Rangers in times of distress.

Anyway, once they had filled me with wise walking words, I headed off into the sunshine, Peggy the sidekick in tow, ready to take on the challenge ahead.

It didn’t feel much like a challenge as I set off. It was so beautiful I barely noticed the distance and time passing as I took in the views around me. Absolutely stunning. We got up the first hilly path and hit a small plateau that had a small gradient heading slowly up to the next peak. This is where the various groups and solo walkers I had seemingly been walking up with (awkwardly trying to keep an acceptable distance apart from each other) fell behind a bit. Not from my immense speed you understand, but rather one walker doing a path check for the park, and the other a photographer who I bumped into on my return at one of the two lochs at the base of Ben Macdui, taking what I suspect are some powerful photogaphs. 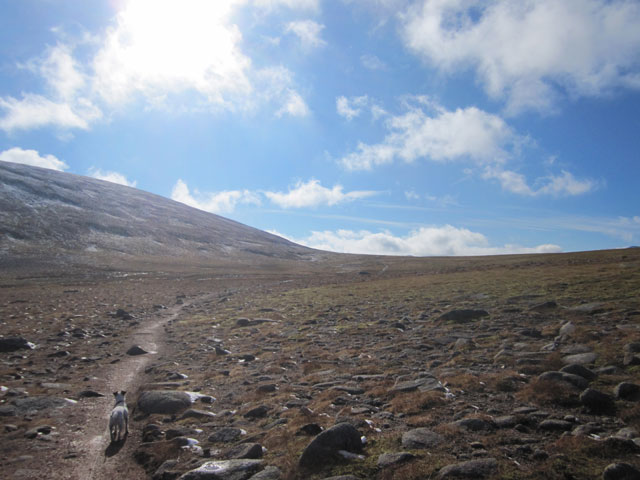 As I got over the second peak, the view ahead stopped me in my tracks. I’m lucky enough to have trekked to Everest Base Camp and Kilimanjaro, but for me the snowy landscape ahead was some of the most beautiful I had seen. Down towards the two lochs, and the path ahead showing my route to the summit, I admit, I took a photo on my phone and sent it to various people with a rather smug message (it finally reached them about 15 hours later when I found some 3G in Scotland, which is rarer than seeing a duck wearing socks). 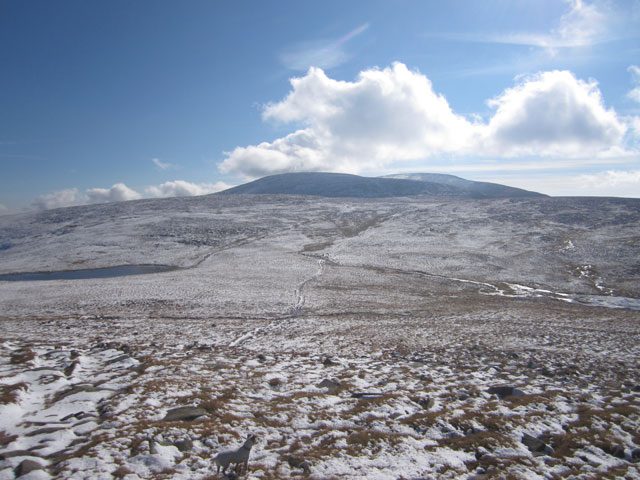 I got passed the two lochs and reached the rocky section, guided by cairns, and took my favourite photo, not coincidentally where I also decided to stop for a bite to eat. The dog was getting fed up with rock hopping, and I was more than happy to sit back and take in my surroundings. Newly fuelled we carried on from cairn to cairn across the plateau – one can see how you would get lost in cloudy and foggy weather - enjoying the sun and the snow. This was my first experience with Peggy in the snow, having rescued her just a few years ago. I’m sure, as a nine year old dug, she’s experienced her fair share of snow but I was amused watching her trot like a show pony across the white stuff. It didn’t feel like a battle at all to reach the summit, I was high on the munro-bagging adrenaline, and could see why people where addicted to climbing them. In that moment I became an addict myself! The obligatory summit photos were taken and seeing no people in the area took a picture of the little lady and I in front of the cairn. Having a look back at these photos, I will from now on climb with a comb. Walking for hours is no excuse for letting one’s hair get so skewwhiff. 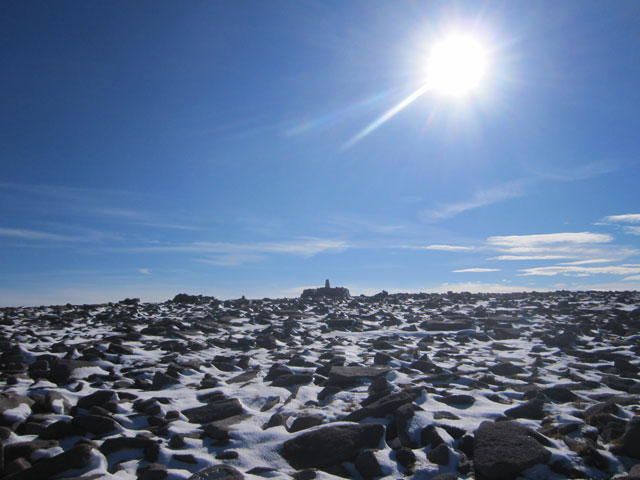 My euphoria lasted mere moments as I got lost immediately on heading downwards, seemingly 90 degrees off course, and I had to stumble across the rocks until I found one of the cairns again to lead me down. Phew.

I reached the loch, and couldn’t find the beginning of the path to the right which would take me onwards to Cairn Gorm, so had to wade across various small streams to reach it further along. The path was then a gentle incline across towards the next munro. One downside of the gorgeous weather was the slushy snow. It was like walking in a stream for much of this part. Not unpleasant for me, but the dog didn’t look too chuffed.

The sudden change from snowy winter wonderland to desert conditions was incredible, and it felt like two completely different walks. The view towards Cairn Gorm made it look like a heat worn mountain from the Middle East. More stunning views across another area of the park, as we walked towards and up Cairn Gorm meant lots of well placed photo taking opportunities, and I wasn’t stopping due to the steep climb at all, no I wasn’t… The summit, with it’s beautiful and inconspicuous weather station (read sarcasm), let me know I was in the right vicinity, and just across was the cairn, the neatest one I’ve seen I think! If I was a girl cairn, and that was a boy cairn, I’d be interested. 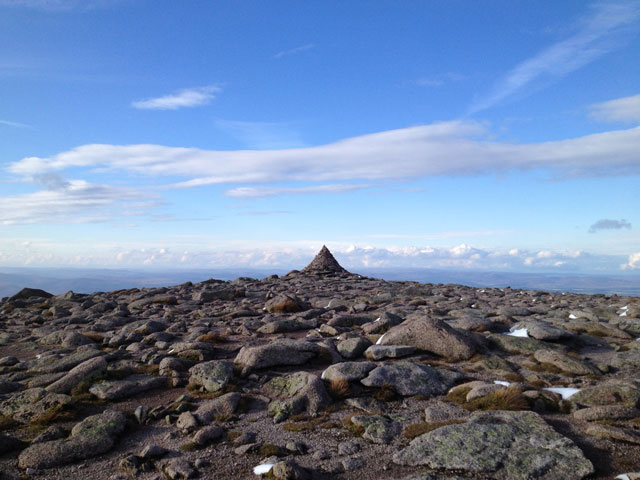 Taking the obligatory photos up top, Peggy and I began the decent and were horrified (even the dug tail went half mast) to see a yellow brick road to the restaurant below. With awful blue roping that stained my gloves. I soon went off path, and headed down the grass alongside. I didn’t stop on reaching the restaurant; if I sat, I wouldn’t get back up – the descent was starting to take its toll on my knees. 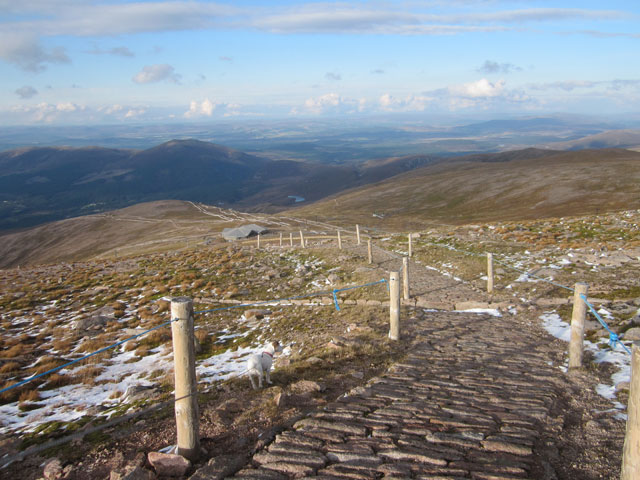 I did take note of the ski signage though, and started making plans for a weekend of snowboarding around these parts come the New Year. This descent was my least favourite part of the whole day, descending down gravel and steps, my knees would have cried and wailed if they had a little mouth and eyes… Whether it was that I was becoming delusional, or maybe I’ve always been this childish *cough*, I found a rock that looked like a bum, and it had me giggling for a lot of the remainder of the descent. It made the time pass, and I was soon back at the car park, feeling thrilled at how the day had gone! 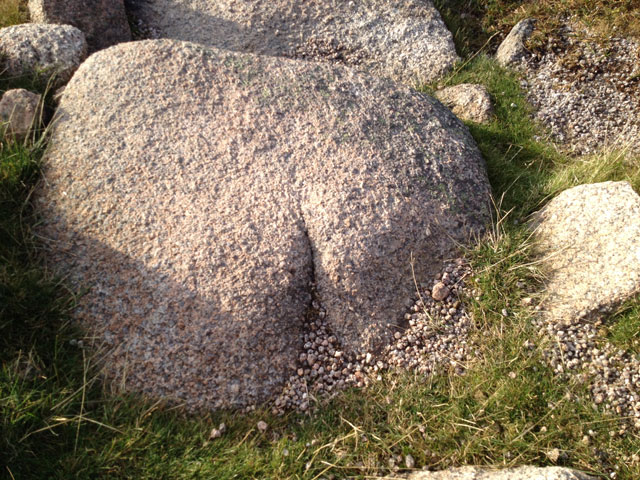 I was hooked on munro-bagging, and as I drove towards my pizza and chips in Aviemore, and saw this view, I thought maybe I was a little bit hooked on Scotland too! Great day you got for it! How did you manage to get a photo of Cairngorm summit without people???

I went up it from Braemar in May. We saw almost nobody for the entire weekend then when we reached Cairngorm we met three walking clubs, a hen party, multiple families and goodness knows how many dogs! We must have been 2/60+ people there!

Well done to you and Peggy

Excellent photies ! The approach to that area is even better from the Braemar side; much wilder and more scenic. That 'bum rock' looks like a troll didn't quite make it back underground in time to avoid the sunrise!

Well done you and Peggy - that's a long walk for a 9 year old's first munro-bagging adventure. It was my old dog's last hill back in 2001 so holds fond memories for me.

Lovely photos, hope Peggy is up for many more Munros when you can make the trip from deepest Devon.

Great job, you two. Glad you got the views for your first Munros..

Well done for your first, big walk that, the start of a long journey

A fine pair of hills to break your duck. I took that route twice this past Summer. Would happily re-repeat again – it’s such a fine long walk-in.

That bum-rock pic gets a look in, in the “Show us yer Boulders” thread on here.

Glad to see I’m not the only one who found it childishly amusing!

That's a lovely view of the Lairig Ghru. I think you are close to where I camped my first night ever in the Cairngorms. I had hiked all the way up through Rothiemurchus from Aviemore station and was deep in the Ghru with cloud everywhere. Where you were, high up on the plateau, was unknown to me, and I lay awake in my tent imagining how far those massive slabs of rock continued into the sky. They weren't the biggest hills I've experienced, but they were the most remote, and rugged.

I was by myself, wearing multiple layers to fight off the cold and all alone. Not an unpleasant kind of alone though. It was exciting not knowing what was ahead. I had a great map, but without experience of the terrain it's difficult to get a feel of what it's really like.

It seems so silly to think of how I felt back then, now that I've been all over those hills and can picture them a bit better.

Lightfoot2017 wrote:
That bum-rock pic gets a look in, in the “Show us yer Boulders” thread on here.

Glad to see I’m not the only one who found it childishly amusing!

That thread is brilliant!

For someone with limited experience that's a seriously impressive start to the Munros. Esp on your own.

Your other trip was mightily impressive too. All that way from Exeter!

Thanks for sharing your story of your first Munros. Looks like you got a great day weather wise and some nice pics.