Having a passion for the outdoors is great, i love it and spend every day possible outside, whether it hill walking, biking, kayaking or climbing. However it comes a time where you want to walk or climb and there is no one who is free to go with you! This route from Ben More farm up over Ben More and on to Stob Binnein was chosen by my newest hill walking companion Graeme, who i met via instagram after exchanging stories and photos of the munros we have climbed and routes we wish to try out.

13th October we decided to take on these two munros following the steep ascent route up Ben More from the farm track. Parked the car at a lay by around half a mile from the farm track gate and started our day. The weather was decent, not too cold and although cloud cover was low and covered the summit it was predicted to lift towards midday (or so it was suppose to). Marking the start of the day was the passing of the wooden Ben More sign looking upwards at the steep ascent of the first munro of the day. 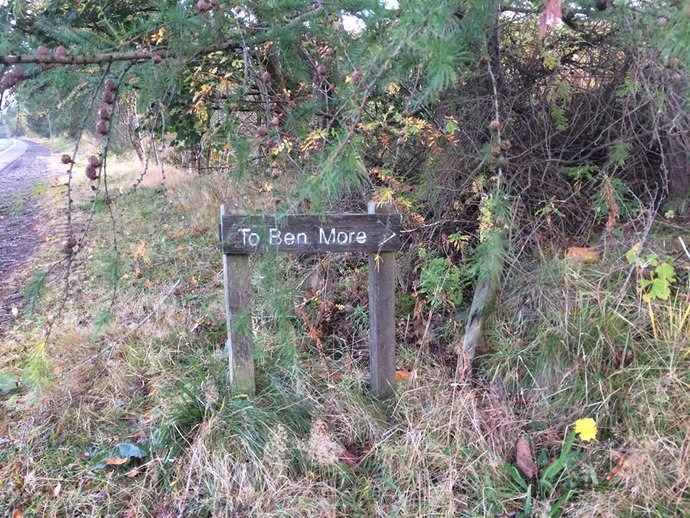 At this point the views were obscured with cloud cover, within 5 minutes the cloud over Loch Lubhair had already lifted giving a great view across towards Meall Glas, Ben Challum and Sgiath Chuil; and a spectacular view it was. Continuing on the farm track we came to the gate where we left the track and and started our ascent on the steep, grassy and boggy face of Ben More. The steepness of this Munro can be deceiving, the gradient is hard, both myself and graeme have good levels of fitness and there were times that we did struggle. The boggy steep path that you pretty much create yourself on the ascent does turn into a slightly better path as you approach the summit, however at this point he sun was trying to break through but the cloud was back and we were unable to see more than 10ft in front of us, though taking a 180 degree rotation the views behind continued to be spectacular. Reaching the summit of Ben More, we could see not much at all, which was a shame as i really wanted to see the views across to Loch Tay; one of my favourite places in Scotland. We did the generic cairn photo taking and added some more layers as the temperature had dropped quite a bit and we were rather exposed up on the summit before starting our descent towards Stob Binnein. 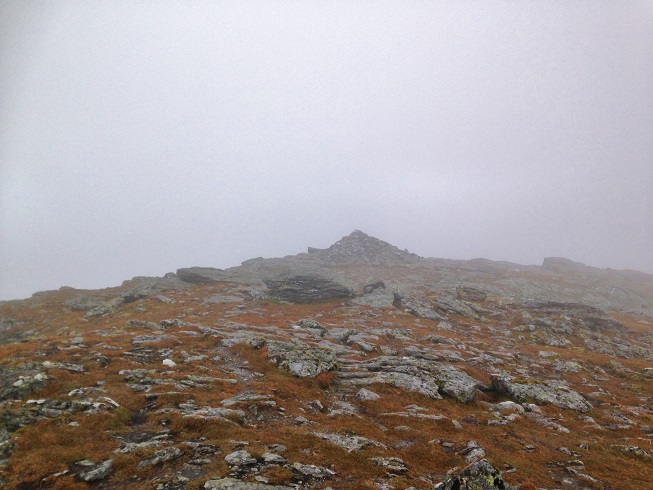 The descent down from Ben More is marked with a clearly defined path, it is rather rocky to begin with and at points you are scrambling more that hill walking. During this rocky scrambled descent the clouds lifted for a few minutes and i managed to capture one of my favoured shots from this trek looking towards Stob Binnein; (i have since added a filter to it). We took a break from lunch at the pass between the two munros marked by a big boulder. During out break you could hear a Stag calling out from somewhere in the valley below but with the low cloud cover it was impossible to spot him! That would have been a great addition to the day to see!!

The ascent of Stob Binnein is a clearly marked zig zag path, it is not nearly as challenging as the ascent we had just done of Ben More and it was a really enjoyable walk. The views again obscured by cloud for most of the ascent but we did get a few snaps here and there. We reached the summit of Stob Binnein as expected with a fantastic view of cloud! The descent was back the way we came, traversing down the north ridge to where we had lunch, then heading off to the left down and around Ben More. It is a very very boggy descent, the rain the days prior did not help the ease of descent here either. There were a few times where i found myself picking myself off the ground. On the way down i stopped and spent a good few minutes studying the movements of spiders that were on the near by rocks. 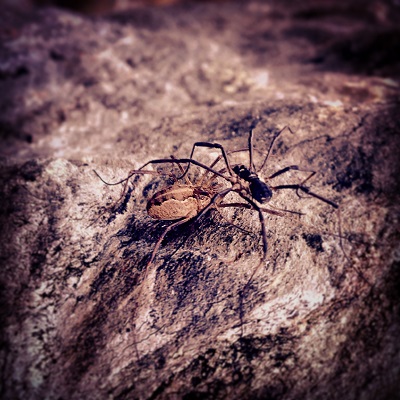 It was at this point my camera battery died, so im afraid there are no more photos to share with you, only words from now on! We continued the descent down the boggy slope that does eventually lead to a better defined path and on to a track that leads around the base of Ben More joining up at the gate where we originally left the path at the beginning of our day.

I very much enjoyed climbing these two munros! Although the ascent at the start of the day is steep and does take a lot of energy out of you, the views i got to see were well worth it. I will certainly we doing these two again, i want to try then in snow season for sure! Thanks to Graeme for spending the day on the hills with me and im sure we will be back out on another route very soon!

Thanks for reading this report and enjoy your trek of Ben More and Stob Binnein! some nice instagram style photos there, especially the spiders . when we went it was **** down all day , didn`t see a thing

that is a shame! i will be back up there in decent weather for sure!

Thanks on the photos, my user for instagram is still wee_emy if you've got it.

That was a good read. Still have these two to do so this will be helpful. How would you rate doing it the other way round - up Binein first then the steep ascent of More would be a descent? Or would that be worse?

dogplodder wrote:That was a good read. Still have these two to do so this will be helpful. How would you rate doing it the other way round - up Binein first then the steep ascent of More would be a descent? Or would that be worse?

Better to do neither! Start from Inverlochlarig (or from Auchessan in Glen Dochart and include Meall na Dige in a round).

Hi there wee-emy, some nice photographs there, particularly like the one of you in the foreground with the long trail to Stob Binnein in the background. It's a mighty long time since I climbed these two thanks for the reminder. Nice headgear by the way, bet it keeps the ears warm in winter

So your the one thats been pinching the stones off the tops of Munros, i hope your planning on rubbing off all your graffiti and returning them

NIce one!! I like the second pic and of course the one you have filtered is fab!

It looks like a bloody hard slog up Ben More side. I did these two from Inverlochlarig and it was steep, but gets you up quicker

i enjoyed the route we took, i dont think i would enjoy it as much if going up the middle of the two munros as you dont get the views off ben more on the ascent!

i may look at doing that route you suggested from Glen Dochart though, had a look at it and looks a good walk! Again, would like to do it in decent weather!

dogplodder wrote:That was a good read. Still have these two to do so this will be helpful. How would you rate doing it the other way round - up Binein first then the steep ascent of More would be a descent? Or would that be worse?

Better to do neither! Start from Inverlochlarig (or from Auchessan in Glen Dochart and include Meall na Dige in a round).

Thanks! those snaps with the trail to Ston Binnein were literally a mad dash to get them taken before the cloud came in again!

Yip, i am particularly fond of the owl hat, if you see me out on the hills with it on, please come say hello!

The Rodmiester wrote:Hi there wee-emy, some nice photographs there, particularly like the one of you in the foreground with the long trail to Stob Binnein in the background. It's a mighty long time since I climbed these two thanks for the reminder. Nice headgear by the way, bet it keeps the ears warm in winter

haha! i do replace them with stones i carry up with me.

it was a great day, thanks.

Beaner001 wrote:So your the one thats been pinching the stones off the tops of Munros, i hope your planning on rubbing off all your graffiti and returning them

No views for me when I did them, just 50mph winds. So that big boulder came in handy for me too!

Nice one, enjoyed reading the report, some great & interesting photo's

15 years since I struggled up Ben More & I still remember it, one of those never ending ascents