It`s been two months since we finished walking the West Highland Way in august and i`ve just decided to write it all down so i can go back and read about it in the future. We had such a great time so forgive me if this ends up going on a bit. My manager Tommy has wanted to do it for a few years now and my regular walking buddy Jim said he would join him and asked me to go. I said no without even asking Leianne, my wife, because I thought there was no way she would give me 6 days off to leave her with 3 testosterone filled, bickering teenage boys on her own. As it was, people fell in and out of the walking party and eventually there was a free space left after all accomodation was booked and i went to her with the big puppy dog eyes and asked "permission". Surprisingly she said yes, although she had been through a big operation and she thought that i had been a big help through her recovery and said i deserved to go.
So, six of us were all booked up to go, myself, Tommy, Jim, Louise (Jim`s daughter), Martin (Tommy`s nephew) and Brian, Tommy`s long lost friend from Englandshire

We were then to be joined by Beck, an American gal Jim & Louise had met on their travels to The Western Isles a month before. She was spending three months in Scotland, visiting almost every corner of our wonderful country and asked to join us on our trek. She managed to get booked into mostly the same places as us so was good to go to. We met up at Jim`s house on the saturday morning and all piled into our van to drive to the start of the walk at Milngavie . With Jim driving and the two girls in the front beside him , the rest of us sat in the back with the bags. Tommy being the common denominator among us all, the rest of us got to know each other in the usual customary way........ by farting

it was awkward at first , but by the end of our half hour journey we had all let rip, and were the best of pals already.

We met with the guys from travel-lite and then walked up the stairs to the starting point for the pre walk ritual of photo taking. Having walked the Way before and reading other people`s experiences of it , you know there`s always going to be willing passers by who`ll take your picture. We asked one couple to do this , who were very friendly and chatty and were patient enough to have everyone`s cameras/smartphones passed to them to take the shots in turn. And they were always passed back with them saying " You better check that, make sure i`ve taken it right" most of us did, except Beck until later on when she went to use her camera later , found that she had indeed been given as a memento of the start of her walk, a picture of a bottle of water and some paving stones 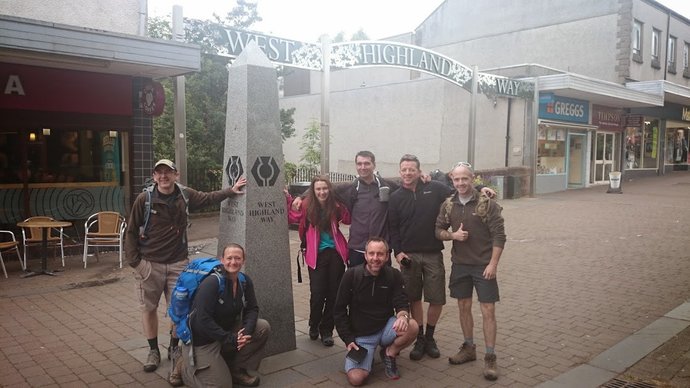 Weather wise, it wasn`t too bad. We just had a week of rain after a couple of great weeks but it was looking to clear up again, and i was optimistic. To save on cost jim, Louise and I shared one big bag to be carried by the baggage transfer company, and i was travelling lite. No big jackets and today i was wearing shorts, something i would be doing every day of the week. The choice of footwear was to be my main concern in the weeks leading up to the walk. When i did the walk 5 years ago, which was my first long ditance walk of any kind , i wore great big chunky walking boots for most of the way and added with the weight of carrying my own gear resulted in aching sore feet and an achiles strain that would linger for months. My budget was tight, as always, ans i ended up going with a piar of Karrimor waterproof summit series from sports direct for only about £23. I did also invest in a pair of gel insoles to put in them which worked a treat , i think i only had one slight blister on my heel all week.
As everybody knows the start of the Way takes you through Mugdock Park to Craigallan Loch past Dumgoyne hill and by the Carbeth huts through Gartness to Drymen. As we walked and chatted we all had a buzz about us , everyone was up for it and i knew we were in for a great week. Welcome to the Way

As we walked the section between the Beech Tree Inn and Gartness i feasted on the brambles growing along the path as Beck filled me in on her time staying with friends in Knoydart and the infamous owner of the pub up there. Me Louise and Jim also wound each other up about our conquering of the Cobbler, whether or not we had climbed the needle. Jim and I had held back for different reasons here , and we were lucky enough to spot some buzzards in the field to the left of the path. First it was one in the air , then we spotted a couple down in the field and then eventually the five took to the sky at once and we watched them as the circled around gaining height and then distance before disappearing. We caught up with the others at Gartness and also had our first encounter with a group of young Belgians who were also doing the walk. They had started the night before , camped down by the river and now in the daylight didn`t know which way to go. I pointed them in the right direction and we carried on our way.
We stopped shortly before Drymen for a snack and a rest and looked back towards the wooded knoll of Drumgoyach and congratulated each other on how far we had travelled by foot....but in the other direction , Conic Hill .....looked miles and miles away.
As we headed into Garadhban Forest me and Jim stopped to wait for Beck, who had fallen behind a bit. I had a niggling toe nail which i decided to cut out and she had caught up with us before I had put my shoe back on. Tommy then came down the track looking for us. They had all stopped to wait for us, just around the corner out of sight behind the trees. As we took to the path again I began to feel a pain in my right groin , an old football injury that had kept me from matching Ronaldo & Messi in the goalscoring stakes

As conic hill came closer it really did hurt and I walked alone a bit and gritted my teeth and fought the pain on my own. 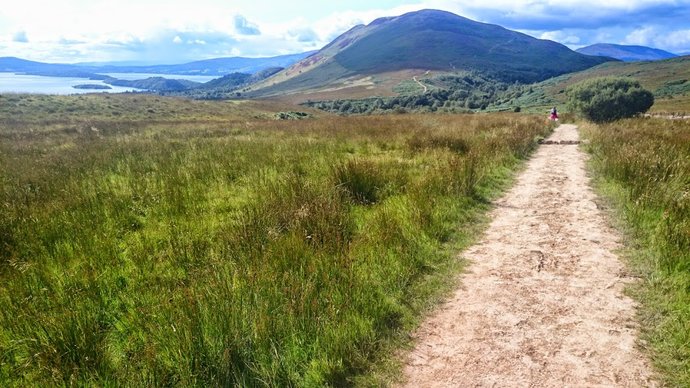 The 3 guys marched on ahead as me Jim, Louise & Beck stopped at the bridge at the bottom of the hill. We snacked , took photos and were munched on by the first midges of the trip, we also encountered some scary cows, by Louise`s estimation anyway

My memories of this climb were not good, but today I was feeling good apart from the pain in my groin and the way up was simple enough. It was made all the better with the views towards Loch Lomond, which were stunning and the fact that our mate Tam met us at the top. We sat on the top for a bit , which was quite windy, apart from that it was a beautiful day and we all lay on the grass, between the sheep poo and soaked it all up. 
Eventually we headed down , not back onto the path but straight along the ridge and down a knobbly route which required some nimble footwork. It was fine for me & Jim , but i should have considered Louise & Beck a bit more. They got by ok so all was good. I t was now just the straightforward descent to the Oak Tree Inn and beer time ! Last time we stayed in the bunkhouse, this time we had our own little apartments in the buildings up the road a bit. We haeded back to the pub after a shower and a change of clothing and we were joined by Tam again , who had gone for a wee walk while we got ready. the beer was flowing , the food was great and patter was tremendous

It had been a great first day, we were all in great spirit and day 2 beckoned.

[thats just how I remember it Tommy can't wait for day 2 !!