With the first week of the school October holidays spoken for by Center Parcs, I had arranged some time ago to meet up with Kev for a walk during the second week. The Thursday was chosen as we were not back from holiday until potentially quite late on the Monday and I would also have Ailsa on the Wednesday, as Debbie would be working that day unlike a "normal" week. The Thursday gave me the opportunity to arrange for Ailsa to have a sleepover at her grandparents thus avoiding me having to rush to be back for her that evening.

Little did I know at the time that the day in question would turn out to be Kev's 40th birthday, but like the true man o' the hills that he is, he could see no better way of marking the occasion than with a couple of remote Corbetts.

I also hadn't predicted that by the time the day came round, it would be 3 months since I had seen any hill action. I had done most of the Cateran trail in late July and had my 4 or 5 days up north earlier that month which included the 16 hour epic on the Beinn Dearg group and the Nethy Bridge meet, but nothing since. Even last week during our week at Whinfell Forest near Penrith, my plans to mark my own birthday with a day on the Helvellyn circuit had been scuppered by the foul October weather in the Lakes.

So I was eager and ready with the remains of a 10 year old Jura Origin in my daypack when Kev arrived at the house just after 8am. A swift change over into my car and we were off up the A9 towards the Trinafour road junction at Dalnacardoch Lodge in less than enticing conditions.

We were off and walking right on 9.30 and instantly we had to deal with the rather brutal start to this route. Not the initial lung bursting ascent of so many routes, but the dash across a dual-carriageway section of the A9 to the safety of the landrover track on the east side.

We made good progress on the track in the drizzling rain and clag, with a brief stop to don more gear at the derelict building at Badnambiast. The conversation was the usual mix of work, domestic, recent hills and musings on Scottish football (the Dons and the Pars in particular), interspersed with our thoughts on the outcome of the referendum and the way forward now.

A few landrovers passed us on the track on the walk in and it occurred to us that neither of us had though to check in with the hillphones service to ask about stalking and shooting activities. I was glad I had my red jacket on and that we would, for the most part, either be on the track or at higher altitude. 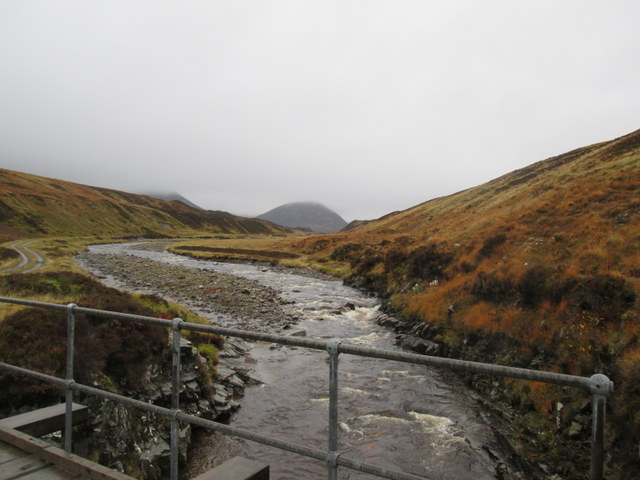 Early sighting of An Dun The Gaick Pass opening up between the two Corbetts There's little danger of this bridge washing away this winter!

Another stop to check out the rather sorry looking Sronphadruig Lodge, where another vehicle passed us and shortly afterwards a few more shots rang out, but the occupants seemed entirely nonplussed by our presence there. Soon it was time to commit to the ascent of An Dun and the realisation dawned, as if the contours of the map or the description of An Dun in the SMC book ( "An Dun rises like a motte") were not enough to have made the penny drop by now, that this was going to be one steep old haul. Ascending the southern nose of An Dun

My prolonged lay off was now having a noticeable effect. I was not toiling but could feel my legs burning a bit more than I would expect to be normal on such an ascent. It was indeed sharp but mercifully reasonably short (the high starting point certainly helped).

After a quick photo of the birthday boy at the ignominious summit cairn, we pondered the options. Go on to A'Chaoirnich or hit the road home? We decided to descend back down to the northern end of the loch where we could have a bite of lunch and a dram in a more sheltered locale and make a decision there. Exactly 40 years to get to the summit of An Dun Loch an Dun shortly before getting out of Dodge

Once down we threw the 2 man shelter up and raised a glass before deciding that this was not a day to entirely waste what on a better day would clearly be an excellent round. A'Chaoirnich could keep. Kev had spotted the potential for excellent wild camping between Loch an Dun and Loch Bhrodainn as well as the option for a two car point to point right through the pass, opening up access to the Corbetts further north, and there is every chance that I will end up staffing a Gold expedition through the pass at some future point (it being a previously used route by some of our groups).

Back at the car after another dash across the A9 I regretted my poor organisation and lack of a change of clothes while Kev changed into drier gear for the drive back home. The best part of a packet of wine gums later and we were back at mine where Kev took ownership of 4 bottles of fine ale from one of my recent new finds, the Black Wolf brewery near Stirling before heading back to sunny Bearsden to drink beer and contemplate whether life really does begin at 40, while I thanked my lucky stars that it was but a mere fortnight until the Tyndrum meet.

A long way for one corbett in miserable weather too bad!

I guess it's another long walk soon for the other one now. The estate seems to be fairly active re shooting parties, I met them as well when I did them, no problems though.

C'etait dommage a la meteo but merci pour la bieres.
as you say, a good area to return in better weather.

Well, a day out in the hills with friends is always good, eventhough the weather was pants!

Shame about the weather Graeme,done these 2 recently in decent weather and it makes a good day.Happy birthday to kev,a fine way to spend it

Nice one Graeme, you are hardy souls, I think I would have been wimpish & found something else to do

We (Mrs F & I) are just back from Centre Parcs, 2nd week of the school hols, had a great time in 'mixed' weather, got Mrs F on a bike, which she confessed to really enjoying it

Real shame about the weather

I found these to be two to be great Corbetts, but An Dun is one steep, steep climb

Hmm...when I saw you announce this on TH I had a feeling it would end up like this

. Better luck for the other side of the pass.

shame you didn't get good weather. I went up here tw years ago and broke my arm so have mixed memories!!
On another note I seem to remember seeing a lot of deer especially on A'Chaoirnich that day...