My original plan was to head for the Borders and do a couple of Corbetts or Donalds as this seemed to be the area with the best forecast but when it came down to it I couldn't face setting the alarm for 5am so instead I gave myself an extra hours kip and headed for Creag Uchdag in Glen Lednock.

Having settled for Perthshire it looked fairly certain I would get wet it was just a case of whether or not I could be lucky enough to dodge some of the showers.

I arrived at an empty Coishavachan car park for 8.30am and was surprised to find it was also flat calm. Heading up the road towards Loch Lednock

The first part of this walk is just a case of following the road (signed as a ROW to Ardeonaig) towards Loch Lednock, initially flat then starting to climb as it nears the dam.

I know the road access to the dam has been blocked by a locked gate for a number of years now but it's a bit of a shame that only those that can walk a couple of miles can ever see the dam and the loch. My grandparents lived in Comrie all their days and in their later years when they could no longer drive I used to take them out in my car. Quite often they just wanted to go up the glen and see Loch Lednock, something that couldn't happen now. I've no idea the reasons for denying access (there may well be very good ones) or if it's down to the local estate or Scottish Power, either way, seems unfair to deny peeps the chance to see a nice part of Perthshire.

Anyway, on with the walk. Starting the climb up to the dam As I started to climb up towards the dam I started to think about the last time I had walked in this area (other than Ben Chonzie) - wow..............38 years!!!!!!!!! I cycled over to Comrie and took my grandparents collie out for a walk. We headed off up the woods heading towards Glen Lednock and climbed up to the monument. From there we headed over to Crappich Hill then Creag Liath followed by Balnacoul Castle before dropping down to Loch Lednock and heading to the far end of the loch. I then took the ROW and was well on the way to Ardeonaig before it crossed my mind it would probably be a good idea to turn round and head back. By the time we got back to the house it was dark and it was fair to say my Gran was not happy (while Grampa quietly thanked me as he could take a day off the next day as Dougal would be knackered). He was right, Dougal slept like a baby and didn't wake up till midday the following morning. Aaahhhhhh, the days before mobile phones. Looking up the loch from the dam

Just as I approached the turning point at the dam I took the track off to the right which headed towards the trees then just as it reached them it started to zig zag more steeply up the hill. 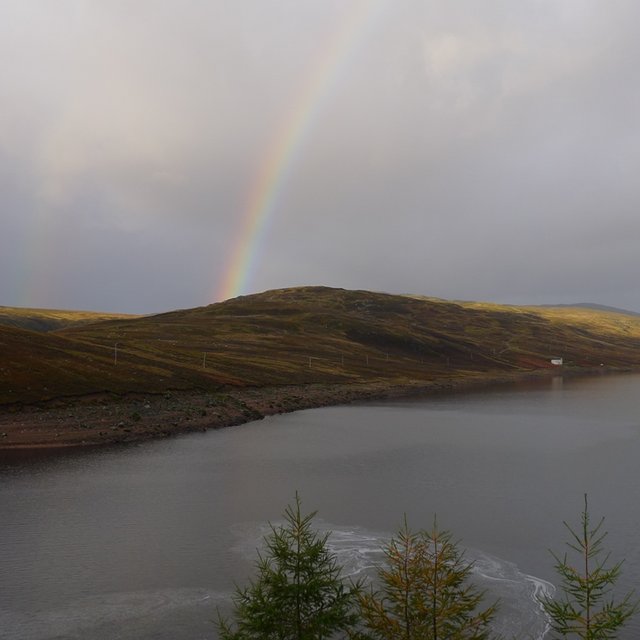 Rainbows over the loch Rainbows over the loch

Although the gradient was fairly steep in places the track made it fairly easy so it didn't take too long to reach the 530m point where I took the left fork to reach a gate followed by a burn that needed to be crossed on stepping stones as the bridge is long gone. Looking up the loch Back down to the dam It wasn't possible to cross the burn close to the track but by heading upstream about 60 yards there are a number of easy crossings. It's worth staying on the higher ground before dropping down to the burn as the bank is steep and wet.

Having crossed the burn I linked up to the track again, it's now a grass track but still easy to follow. The higher the track goes, the wetter it is underfoot. Passing over Meall Dubh Mor the weather is deteriorating, the clouds are gathering and the wind is picking up. Creag Uchdag is a shy hill, well hidden away and it's not till I pass Meall Dubh Mor that it comes in to view. Looking back to the dam again Looking back with the clouds gathering

As I headed for the peat hags between Meall Dubh Mor and Creag Uchdag the weather deteriorated dramatically. The clag arrived in style, the rain turned to small hail stones which were pinging off my face thanks to a wind of somewhere between 40-50mph (according to mountain forecast.com) and it turned fairly miserable.

The peat hags are avoided by keeping to the Loch Lednock side of them (not that I could see the loch) and then once past, picking a line and starting a steeper climb up Creag Uchdag. There then follows a short drop down on a feint grassy track before the final climb starts. By now I can only see a few yards in any direction, all the surrounding hills have disappeared and it's not a good day for getting a paper map out as it would have got home before me so I checked my Garmin several times just to make sure I was OK. At one point I thought I was on the summit only to see the trig point about 100 yards away as it appeared out of the gloom. 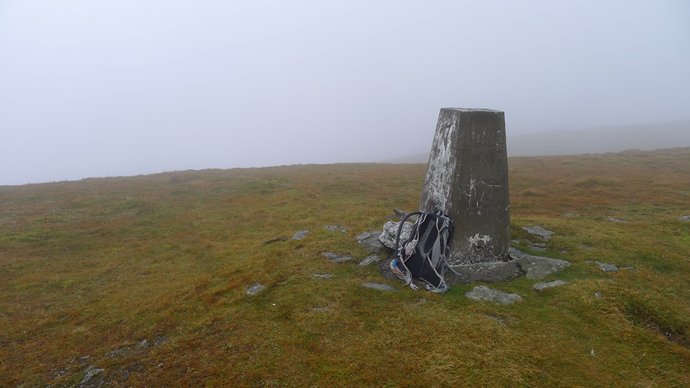 Not a day for hanging around, a couple of quick photos and a half frozen mars bar consumed and I'm off again. Initially this was planned as a circular with the intention being to drop down to the loch side and either head back along the near bank or alternatively carry on to the far side of the loch and follow the ROW back to the car however in the rubbish conditions I decided just to retrace my steps (on the tourist track). Heading back towards the peat hags Out of the clag On the way in to the hill I was tiptoeing round the wetter sections, on the way back with wet feet I just squelched straight through everything that came my way and before long I was back at the point where I needed to find a decent crossing of the burn. Found a good crossing point and that just left the quick drop down to the dam so it didn't take long to descend. From the loch it was back on tarmac so after an easy drop down to the glen floor it was just half a mile of flat walking back to the car.

Time wise, 3hrs 46mins in total broken down to 3hrs 24 mins of walking and 22 mins made up of heavy breathing, taking photos and making a complete **** of putting a pair of waterproofs on in a 50mph wind.

Good fun though and with the forecast I've just seen for the weekend I'm just glad I've been able to get a walk in.

Nice nostalgic walk and a good shot of the rainbow!

I can see why your grandparents liked Loch Lednock. It’s a lovely spot.

Well done for heading out and making the most of the 'weather window'!

Yes, its locked because of similar idiotic behaviour that goes on in Glen Etive with camping and rubbish.

dogplodder wrote:Nice nostalgic walk and a good shot of the rainbow!

Thanks dogplodder - just nice to get out bearing in mind this weekend's forecast.

Well done for heading out and making the most of the 'weather window'!

Thanks Silverhill - as I sit by my computer with the wind howling round the house I'm glad I got out on Friday. I noticed a thread about when is it too windy for the hills, it was about 50mph on Friday and walking uphill in to that wind with rain/hail stones pinging my face it was pretty uncomfortable on the higher ground. Probably could have coped with a bit more but not much, it's meant to be enjoyable.............

Thanks Fife Flyer - the British weather has certainly won this weekend, it's footie on the box for me

prog99 wrote:Yes, its locked because of similar idiotic behaviour that goes on in Glen Etive with camping and rubbish.

Thanks for that prog99 - some idiots spoiling it for everybody (why am I not surprised).