The Alps Of Arrochar

The Alps Of Arrochar

N_I_C.gpx Open full screen  NB: Walkhighlands is not responsible for the accuracy of gpx files in users posts

I had been planning on doing these hills for a few weeks now so when the forecast said it was going to be a dry weekend with good visibility i thought 'thats good enough for me' and packed my camping gear with the view of going solo.
Told the 'other half' my plans for the weekend only to be told "ahh your no gan away again, am always getting left at hame!" So without thinking

i invited her along thinking she would say no but to my dismay she said she would.

So i showed her the hills we would be doing but i dont quite think she realised how hard it would be, especially as shes not used to this kind of thing (more like 10km round the shops).
So the weekend came and Friday night we got up to Arrochar and camped at Ardgarten next to Loch Long.
Saturday morning and i was woken with a very bright light shining in my face and when i peared my head out the tent i couldnt believe my luck! Well the start of the walk was not too bad going i thought but it was very hot in the forest so was relieved when we cleared it and caught a breeze. The views started to open up as i had a look back to Arrochar. I bet Ben Lomond was very busy on a day like today. The climb was fun as we scrambled up between little gullies as we aproached the summit. Almost there. The views were absolutely amazing, just soaked it all in. 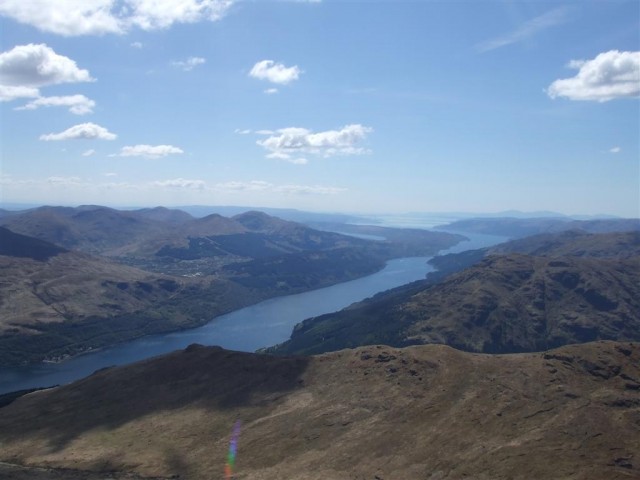 We made it to the cairn at about 12:30 and my legs started to feel like jelly so decided it was time to refuel before we got going again. Really enjoyed our lunch together and once we were on the move Beinn Ime came into sight and i was slightly relieved it wasnt so steep as Narnain. A wee look back to Narnain. So all was good as we basked in the sun and started the ascent to Ime until the other half decided she had had enough and couldnt go on any more. Well i kinda thought this was going to happen so i told her to sit tight and look after my rucksack and i'll go on ahead and bag Ime then get her on the way back down. "Ehh, am no waiting forever, 20 mins and im gan back to the car!" Righty o, as i ran the last third up and down in a mad rush sweating like mad in what felt like 20+ degrees! I was pooped after that but knew i wasnt passing up on the Cobbler, not on a day like this, no way, i'll drag her up kicking and screaming if i have to. So i had managed to convince her that this last one wouldnt be bad and she would enjoy it, some how i dont think she believed me as she was cursing on the climb up the big steps. Once at the top, it was very busy with a lot of people looking at the needle, trying to build up the courage to do it, especially the 4 glaswegians doning rangers tops and jeans with one saying he was full of buckie! Stuff it i thought, im going for it. I would only regret it if i didnt even try. Success! With legs wobbling like jelly, 'hurry up and get a photo' im shouting. Never been so glad to get back down of that thing. Top of the World!

What a day it had been and even Hayley had agreed as she knew we just had the walk in to go.
I couldnt help but stop about a dozen times to take lots of pics of the Cobbler as its just so majestic.
It may not be munro status but it certainly sits proud in amongst its taller neighbours knowing that it is proberly the most favoured of them all, one i shall certainly be visiting time and time again. great report on an area I know well

at least you know you have really "bagged" the hill

Great day for the hat trick

Brill report radman,was up there 4 weeks ago and had to back of,lots of snow,in that wee gulley you were scrambling up got no views that day clagged in all day can"t belive how close I was to the summit of Ben Narnain,only make me more determind next time

You look to have superb weather - some great pics there - what lovely light on Loch Long!

Couldn't your missus have spent the day savouring the delights of the shops of Arrochar?

Well done for making the climb to the actual top of the Cobbler - I'll never be doing that! Wasn't it worse coming back down? That ledge must be awful in descent as it slopes outwards...

Well done on doing the cobbler. Looks scarier every time I see a pic. Isn't it easier coming down facing the rock? I wouldn't want to be looking at where I might be going.

If it's dry, face forward is the preferred descent, but under ice, it's easier to slide down with your back to the rock and hope for the best

To date its been one of the best and most fun day on the hills.

I would say the climbing up the needle is easy but getting down is far harder, i preffered to face forward on the descent so i could see where the edge was and where i was putting my feet. Needed to put a lot of trust in the grip of my boots though and would never attempt it in any other weather conditions (im too young to die) lol!

MC - theres not much in Arrochar is there, the chippy was quite good though. Would rather have carried her on my back all day than let her loose with my credit card!

There's no way you'd get me up on the Needle. Looked a quality day. Cant wait to do this myself.

ps where did you go with tinny, ger etc?

i did the decent of the needle the exact same way on my bum and all fours = most traction, well i suppose you could slither on your belly like snake

Completely missed this report at the time

Pretty impressive getting your missus round this if she was less than keen. There's quite a lot of ascent in the route, even missing out Ime. Mine would've dug her heels in at the top of the woods on the Narnain ascent, I'm sure.