2nd. August, 2014:
This was the first day on the mountains for a group of eight lads from the south of England who had ambitions to complete a self contained trek from Glen Finnan to Achnashellach over a good few Munros. How hard could it be?

our_route.gpx Open full screen  NB: Walkhighlands is not responsible for the accuracy of gpx files in users posts
Well, the answer proved to be that it was a good deal harder than most of them had anticipated but, on this first day, expectations and morale were still high! Having driven up by minibus the day before and walked in to camp by the Corryhully Bothy, we were away soon after 7.00.am. and onto the excellent stalkers' path climbing above Coire Thollaidh in sparkling sunshine. Camping at Corryhully on the previous evening The lads, though, were carrying food for three days, fuel, sleeping bags and tents so found the south ridge of Sgurr nan Coireachan quite demanding and we were not on top much before 9.00.am. - and by that time, the weather was closing in. Mark Ackroyd and me above Corryhully 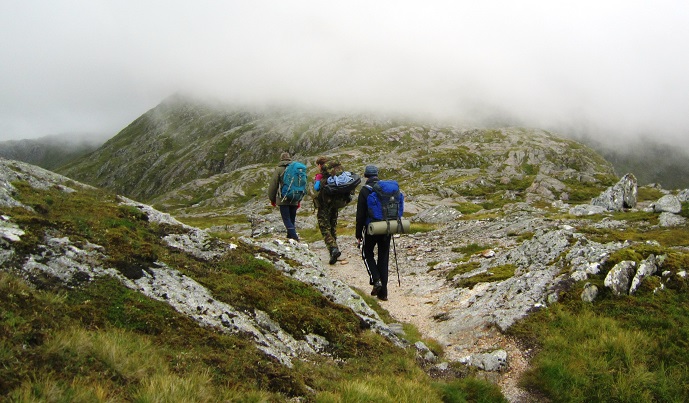 Heading up into the mist Three of the lads (Ollie, Alex and Nikita) on top of Sgurr nan Coireachan

Mist, rain and strengthening winds saw us along the ridge to Sgurr Thuilm (where we met the only other people of the day) before a steep descent got us on to the trackless north east ridge of Sgurr Thuilm and, after a fair while, down to cross the river at the foot of Gleann a'Chaorainn. It had been hard work so far for this relatively inexperienced party but - albeit it in continuous rain - we were soon on the forestry tracks (first in Glen Pean and then in Glen Dessarry) to make the A' Chuil Bothy by 4.00.pm. or so. With the midges and the rain besieging the place and enough room inside the bothy, tents were abandoned for sleeping platforms and our dehydrated food (Super Noodles this evening!) was eaten pretty quickly. A wet evening at A'Chuil