Had arrived late at Kinlochewe - time enough to have some lunch and even a cheeky wee half of the Beinn Eighe - a beautiful beer. My plan was to leave the car park beside Loch Maree by 1400 and allow the hordes to get on and off the hill. While I would be following the magnificent mountain trails to the bealach, I knew once was up there it would be a fair old jaunt over to Ruadh Stac Beag - and so it proved. The slightly irritating thing was the number of cairns with various signs - "steep path"; "305m"; "450m". I'm sure they are meant to be helpful but I can imagine it only serves to infuriate the less fit on the hill. However, good progress was made and once on the bealach, the views across to Ruadh Stac Beag and just behind it, Beinn Eighe were outstanding. The book describes going right up to the back of RSB and I could see why - it looked impenetrable and the screes looked very tricky indeed. However, was that a faint path I could see ascending it? Why yes, ould chep, I do believe it was. I took a few moments to sit and appreciate the real wildness of this place - Ruadh Stac Beag was visually stunning and surpassed many a Munro for its appearance. The 2nd hill, Meall a Ghiubhais also looked pretty good but I'd get a real look at its character once on RSB. As I began the careful ascent on to the scree slopes, I began to make real height - however, the path seemed to meander out and rather than walk across scree slopes, I decided to head straight up towards some crags - this afforded some very airy scrambling (head for heights needed) and by going direttisima, I got on to the extremely odd, lunar summit. A fall going up these crags would probably have been very serious so in retrospect, I would encourage 'taking it from behind' - ahem. From here, the vistas toward Meall a Ghiubhais and Beinn Eighe were breath-taking. I still had a 2nd objective for the day and began to head directly South off the summit and down scree slopes - not easy - in fact, as tricky a descent as I've ever experienced. I ended up running down scree slopes until I was back at the Allt path. From here, it was simply a matter of re-tracing steps then heading for the 2nd Corbett. The evening light upon RSB was beautiful. I topped out and huddled behind the cairn wall as the evening temperatures plunged. No time to waste - I bombed down back to the Mountain trail path and enjoyed a relaxing and lonesome return back to the car, passing a fantastic gorge. Please sir, can I have some more? I ken it's steep! Trekking party up ahead Can you see the path? Care needed The end of Beinn Eighe as we know it 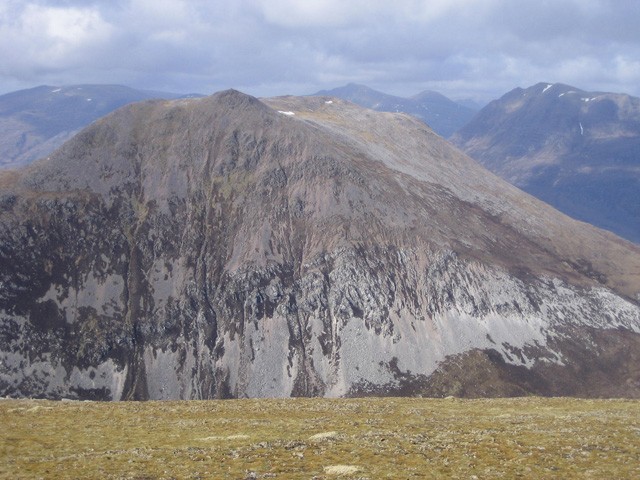 Looking over to Beinn Eighe Meall a Ghiubhais in evening sun A wonderful days work Kev in a fantastic corner of the country. I love the pictures of Beinn Eighe with the remnants of the snow bands strung out along the varous shades of grey on the great scree slopes

. Next time I'm up that way (probably be 2011 at this rate), I'll efinitely be turning my attention to some of the Corbett opportunities.

When did you do this by the way? The date says today, but I'm sure you're no that quick!

Oops, it was Sunday. I suppose i could rectify but there I've said it. Graeme, it's probably my favourite area to hill-walk - wait till you see Beinn Alligin report - amazing.

Glad you included your map on that as, looking a Meall a' Ghuibhas, I can see what looks like a nice route for scree-hating mountain cowards to the NW and then come back round to the normal route

Was the scree that bad coming down south off Ruadh Stac Beag? If it was really steep and loose, I might leave it till it's packed snow in winter - at least then I can have crampons for grip

Seriously MC, the scree coming down off RSB was treacherous. Would be best to head for the lochan and then go down via the burn. Very exciting though.

The lochan/s to the south quite a way off towards Beinn Eighe? There also looks to be a break in the nastiness slightly on the west and then head south - I may have a look at that... but it looked nice in snow on an earlier report and I prefer packed snow to scree

Nice report! Looks to me based on your experience and an earlier comment from Foggieclimber that this was easier in the snow. Torridon scree is a particuarly nasty variant of the phenomenon...

I'd probably agree with you there Kev! Maybe leaving it to 2011 for a return trip is too far away. I wonder what the possibilities for the summer are like????

Torridon is always worth a walk though

Users browsing this forum: past my sell by date and 76 guests